An extremist accused of a suicide plot to assassinate the Prime Minister outside Downing Street made a ‘sponsorship video’ to be sent to ISIS so he could join the terror group, a court heard today.

Naa’imur Zakariyah Rahman, 20, was allegedly planning to blow up the front gates and then rush in with knives, pepper spray and an explosive suicide vest to kill the Prime Minister.

He was charged with preparing acts of terrorism following his arrest in Kensington where police say he allegedly was carrying homemade inert bombs on November 28.

He faces a six-week trial in June along with alleged accomplice Mohammad Aqib Imran, 21, who is said to have been trying to join ISIS and downloaded ‘How to survive in the West – a Mujahid’s guide’.

Naa’imur Zakariyah Rahman, 20, was allegedly planning to blow up the front gates of Downing Street before rushing in to kill Theresa May. Alleged accomplice Mohammad Aqib Imran, 21, is said to have been trying to join ISIS

According to charges Rahman recorded a pledge of allegiance to Isis and went on a reconnaissance mission in Whitehall before ‘delivering a rucksack and bag to be fitted with improvised explosive devices’.

The indictment states he then collected the rucksack and bag ‘with a view to committing attacks’.

On 28 November counter terror cops arrested Rahman and Mohammed Imran, 21, who allegedly saved up £3,600 to get a fake Libyan passport so he could sneak abroad for terrorist purposes.

Imran is also accused of keeping a Isis sponsorship video filmed by Rahman.

The pair appeared at the Old Bailey today via video link from HMP Belmarsh and spoke only to identify themselves. 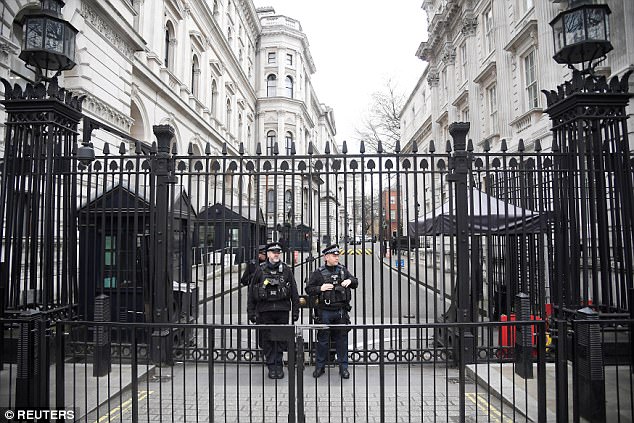 Judge Charles Haddon-Cave said: ‘After discussion this matter with counsel I have fixed your trial for the 18 June next year for four-five weeks in the Old Bailey before me, and there will be a preparatory hearing on the 4 May again in the Old Bailey.

‘Meanwhile you are both remanded in custody.’

Rahman, of Finchley, North London, faces to counts of engaging in conduct in preparation of terrorist attacks.

Imran, of Sparkhill, Birmingham, faces one count of engaging in conduct in preparation of terrorist attacks.