The Bank of England today insisted it is ‘by no means out of firepower’ and will respond ‘promptly and strongly’ to support the UK economy during the second wave of coronavirus.

Governor Andrew Bailey said the Bank will be ready to act during a second and even third wave of the disease as and when it is ‘necessary and appropriate’ for it do so.

His comments came after the Government’s spending watchdog warned Britain’s economic recovery is now ‘on hold’ because of a surge in virus cases and ministers reimposing restrictions on freedoms.

Economists from the Office for Budget Responsibility told the Treasury Select Committee that the economic bounce back could be on pause ‘for a while’.

They said the recovery prompted by the initial easing of the nationwide lockdown had now ‘flattened off’.

The Bank of England’s chief economist Andy Haldane said in July that the UK economy was experiencing a V-shaped recovery as a sharp drop off was followed by an equally sharp upswing.

But there are growing fears that the V-shaped recovery has stalled, with Britain now facing a longer road back to prosperity. 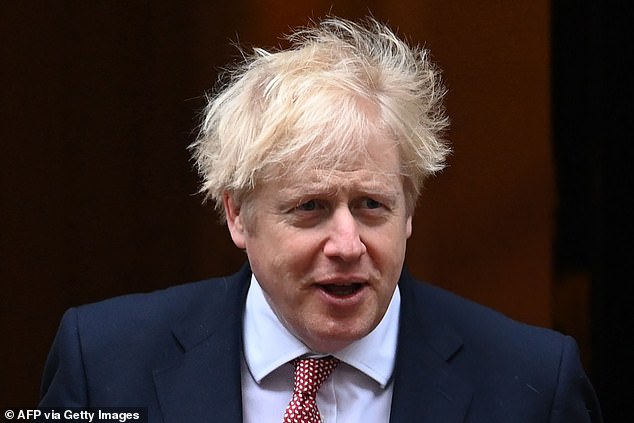 Mr Bailey today insisted the Bank is well prepared to take swift action to support the economy in the coming months.

Speaking at a virtual conference on banking stability, Mr Bailey cautioned the risks to the UK economy were ‘very much to the downside’ due to spiralling numbers of Covid-19 cases and increasing Government measures to bring it under control.

But he gave assurances that the Bank had not exhausted its monetary policy tools, despite having slashed rates already down to the historic low of 0.1 per cent.

He said: ‘We are by no means out of firepower and will use that firepower as appropriate, promptly and strongly, in response to any second and third waves (of Covid-19) where we think it’s necessary and appropriate to do that.’

He said the impact of a second wave of the pandemic would ‘depend on what measures have to be taken in response to that’.

‘We are all of us very much looking at that as we see the start of what looks like a second wave,’ he told the Single Resolution Board annual conference.

‘The risks (to the economy) I’m afraid are very much on the downside and that reflects for all of us the pattern of returning evidence of Covid,’ he added.

He said Britain was seeing a very ‘uneven’ recovery, with some sectors bouncing back strongly and others remaining severely under-pressure.

But Mr Bailey said separately in an interview with The Yorkshire Post yesterday that he does not expect the economic impact of a second wave of coronavirus to be as bad as the first.

‘After Andy Haldane said it was ‘so far so V’, it’s reasonable to think that, at a minimum, recent changes will put recovery on hold for a while, although this depends on the course of the virus itself,’ he told MPs.

Sir Charlie said there was initially ‘good news’ over the pace of the economic growth as lockdown measures were relaxed.

He said the recovery looked ‘pretty much’ like the watchdog’s upside scenario ‘up until the autumn’, when some restrictions were tightened again.

Sir Charlie told the committee it was unclear exactly how long the ‘hiatus’ in recovery could last because it is unclear how the nation will respond to the latest spike in cases.

‘I’m not an epidemiologist, but a large part will depend on non-pharmaceutical interventions the Government makes,’ he said.

‘It will also depend on how individuals, consumers and businesses respond.

‘You certainly might expect that with heightened risk of catching it, people will be more wary of going to shops, bars, restaurants, even if open, so I think it is reasonable to suggest that there will be some hiatus in the recovery.

‘How long and how potentially deep that hiatus is, we don’t know, but I think it is very difficult to know at this stage until we know how effective are any measures to bring that resurgence back under control.’

Meanwhile, chairman of the OBR, Richard Hughes, told MPs that the summer economic update and Winter Economic Plan announced by the Chancellor had both helped to manage the risks posed by the pandemic to the economy. 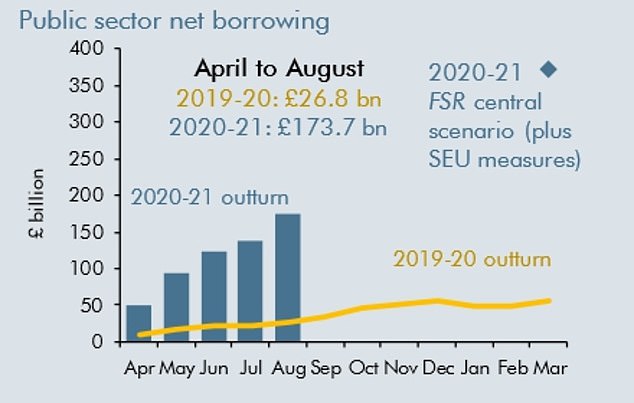 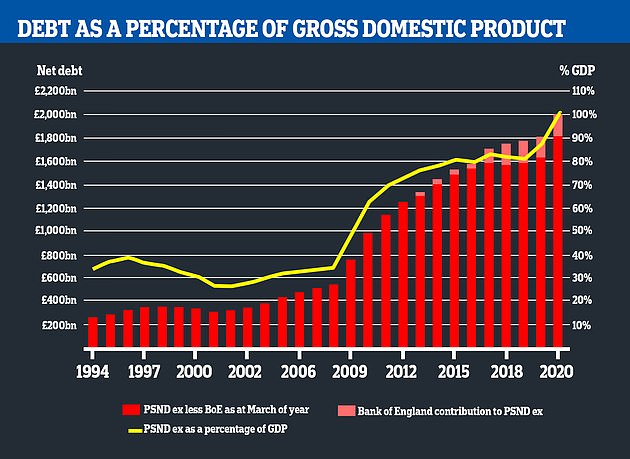 But he also called on the Government to provide a more substantive response to the OBR’s latest fiscal risk report when the economy ‘returns to some sort of normality’.

The OBR revealed last month that Mr Johnson borrowed more money in the space of five months to tackle the coronavirus crisis than the government did in the entire year after the 2008 financial crash.

In in a bleak 10-page analysis of the state of the public sector finances, the watchdog underscored how deep the nation had plunged into the red.

From April to August this year net borrowing ballooned above £173billion as Chancellor Rishi Sunak bankrolled furloughed employees’ wages and bailed out businesses.

The eye-watering figure was a £146.9billion increase on last year and, with more than half the fiscal year still to go, smashed the £157.7billion annual record total set during the peak of the financial crisis in 2009-10 when Gordon Brown’s administration’s grappled with a global recession.