Barack Obama’s daughters Sasha and Malia have cemented their status as true Los Angeles celebrities by ticking off another A-lister rite of passage: a grueling hike in the Hollywood heat.

The former First Daughters – who both relocated to the West Coast earlier this year – were pictured working up a sweat while enjoying a scenic up-hill walk, just days after they were spotted dining out at an exclusive LA eatery with their mother Michelle.

Sasha, 20, and Malia, 23, both put on a sporty display for their fitness-focused outing, with the younger Obama sibling donning a tiny pair of black workout shorts, which she paired with a black T-shirt that was tied up into a crop top, allowing her to show off a silver belly button piercing.

On the move: Sasha and Malia Obama embraced another beloved Los Angeles pastime on Wednesday, when they stepped out for a sun-filled hike together 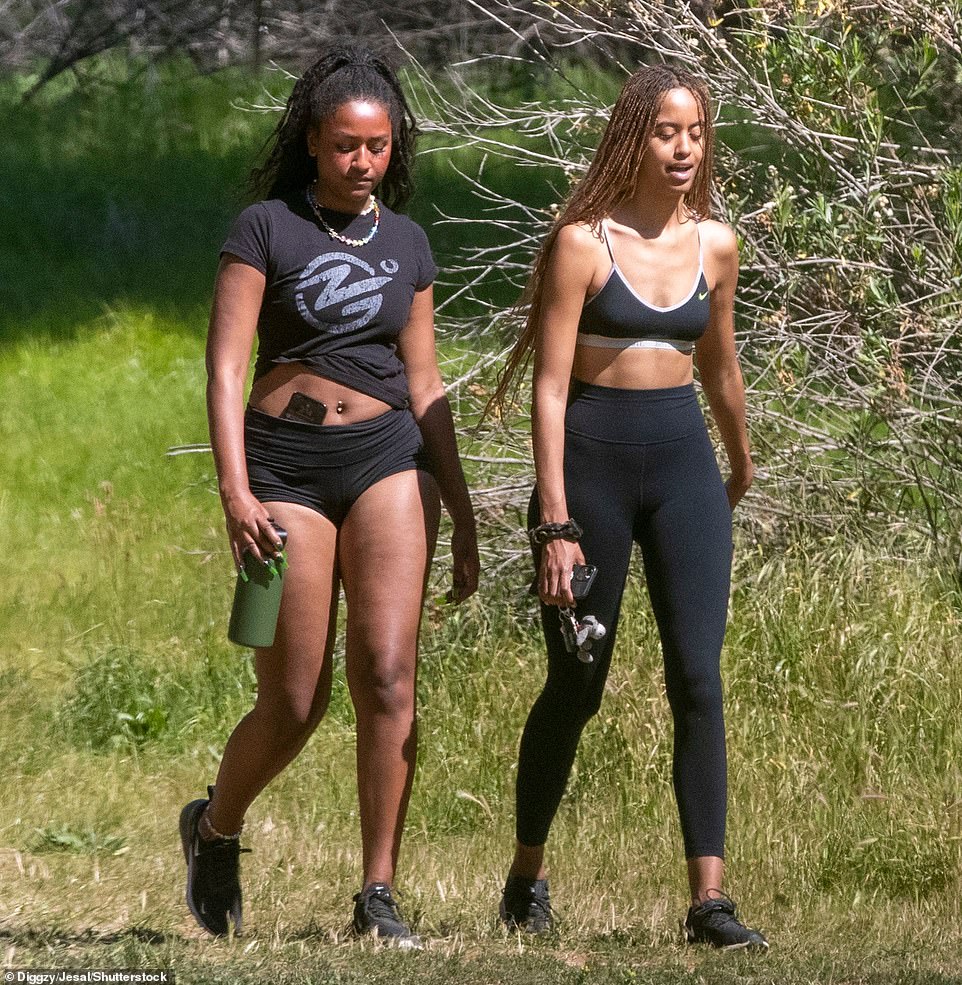 Fitness first: Both Sasha, 20, and Malia, 23, put on a sporty display for their outing, donning workout-appropriate outfits and matching Nike sneakers

While younger sister Sasha sported several accessories, including colorful necklaces and a rainbow anklet, Malia kept things simple, adding nothing but a scrunchie on her arm 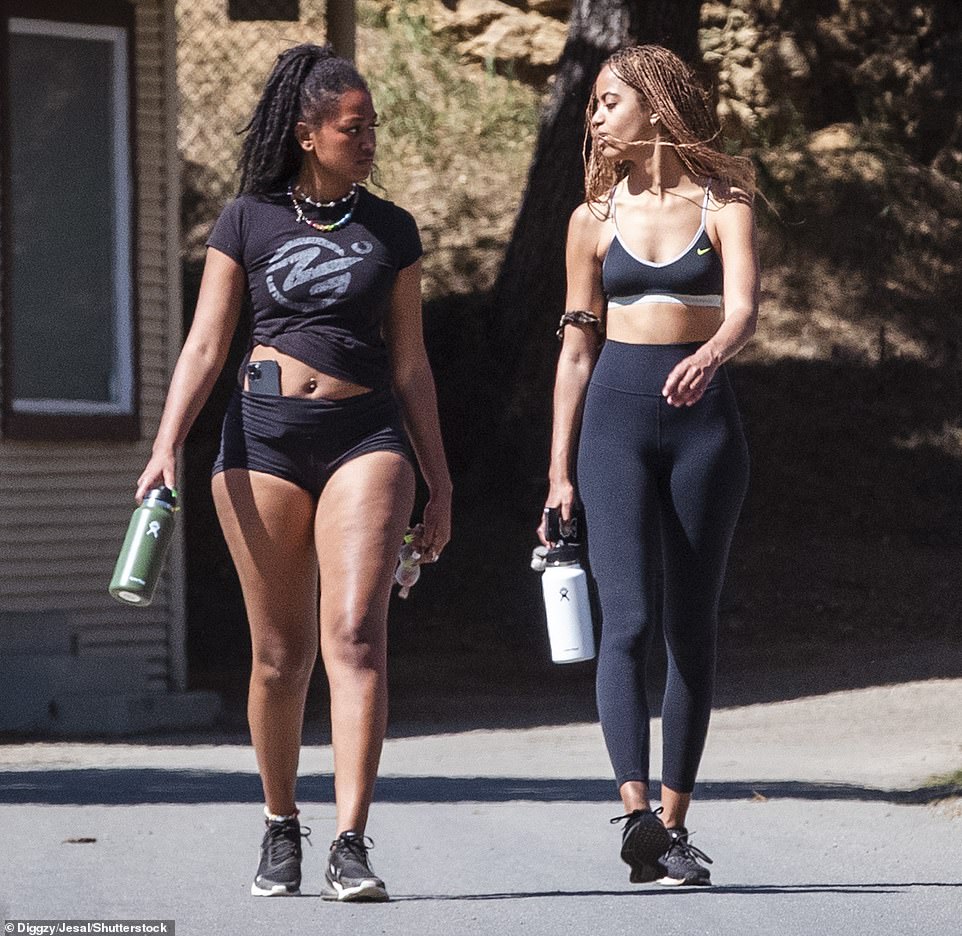 Sasha wore a pair of tiny black workout shorts with a black T-shirt that she had tied up into a crop top, revealing a silver bar in her belly button

Former University of Michigan student Sasha, who is believed to have recently transferred to USC, added some flair to her look in the form of several accessories, including colorful beaded necklaces and a rainbow anklet.

She also showed off long bright green nails that perfectly matched her green water bottle, while she had her iPhone tucked into the waistband of her shorts.

Malia went for a more low-key look, keeping her accessories to a minimum and wearing just a simple scrunchie on her wrist, leaving her long braids to hang down her back as the pair embarked on their hike.

As the girls finished up their walk, Malia was seen carrying a white HydroFlask water bottle, having clearly worked up a serious thirst during the workout. She also held her phone in her hand and what appeared to be a car key on a small stuffed animal keychain.

Exclusive images obtained by DailyMail.com show the sisters chatting happily throughout their hike – which appeared to take quite a toll on both young women who were, at one point, seen leaning over in an apparent attempt to catch their breath as they made their way up a particularly steep hill.

The sisters also took some time to enjoy the stunning nature around them, pausing to look at and pick some bright yellow flowers.

Sasha tucked her iPhone into the waistband of her shorts for safe keeping, while Malia carried hers in her hand along with her car key; both girls were also seen toting matching HydroFlask water bottles 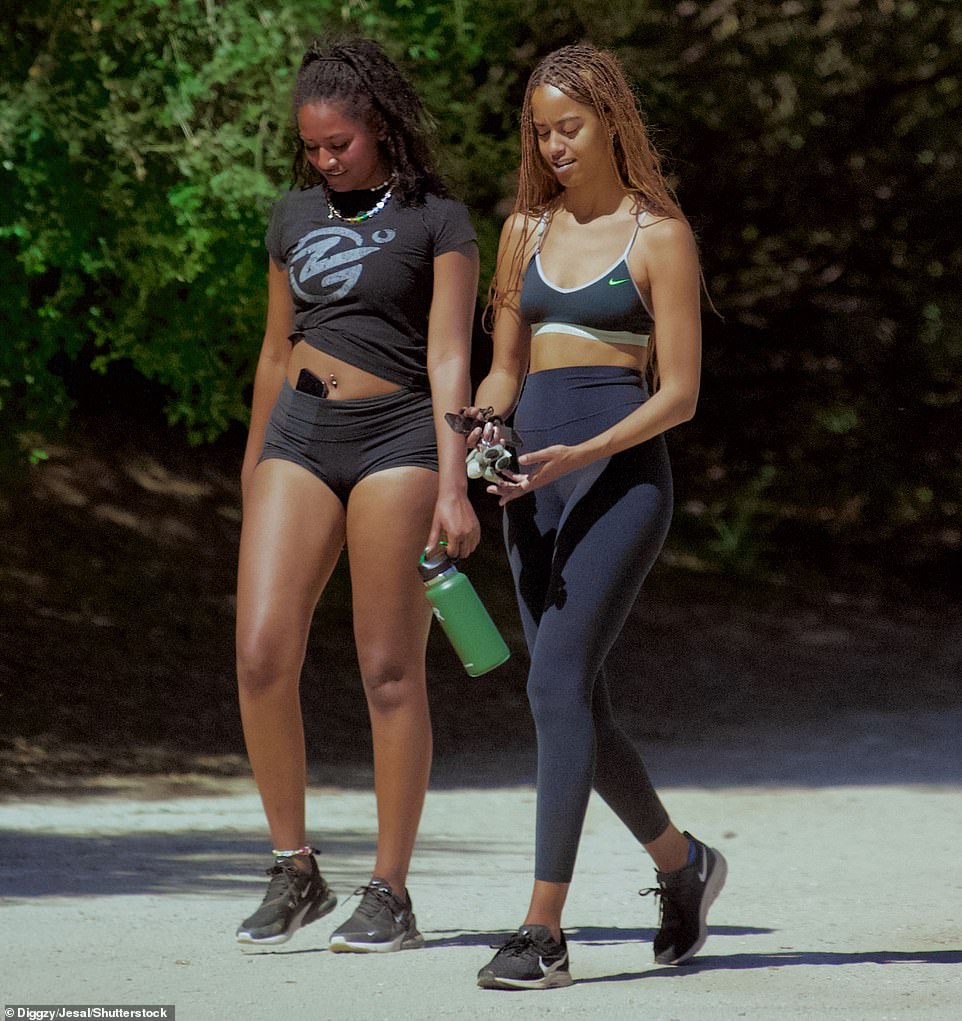 Sasha had her hair pulled back into a high ponytail, while Malia wore hers in long rust-colored braids 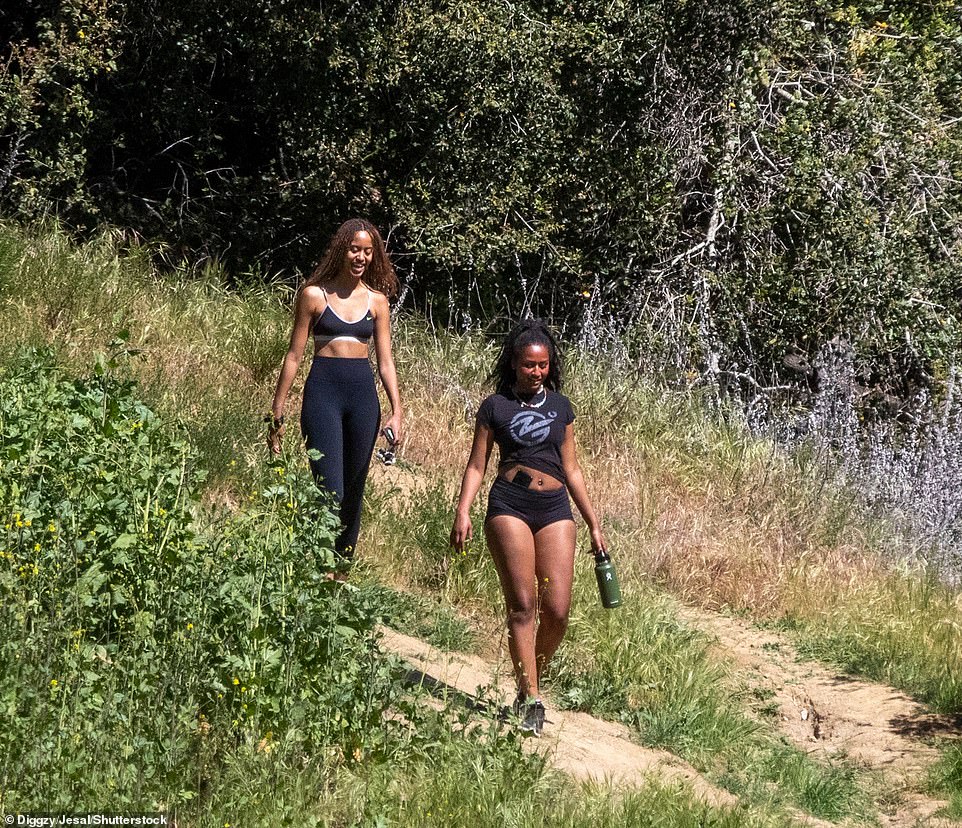 The girls were seen tackling some steep terrain during their hike, which came just a few days after their father, former President Barack Obama, revealed on Twitter that he had tested positive for COVID 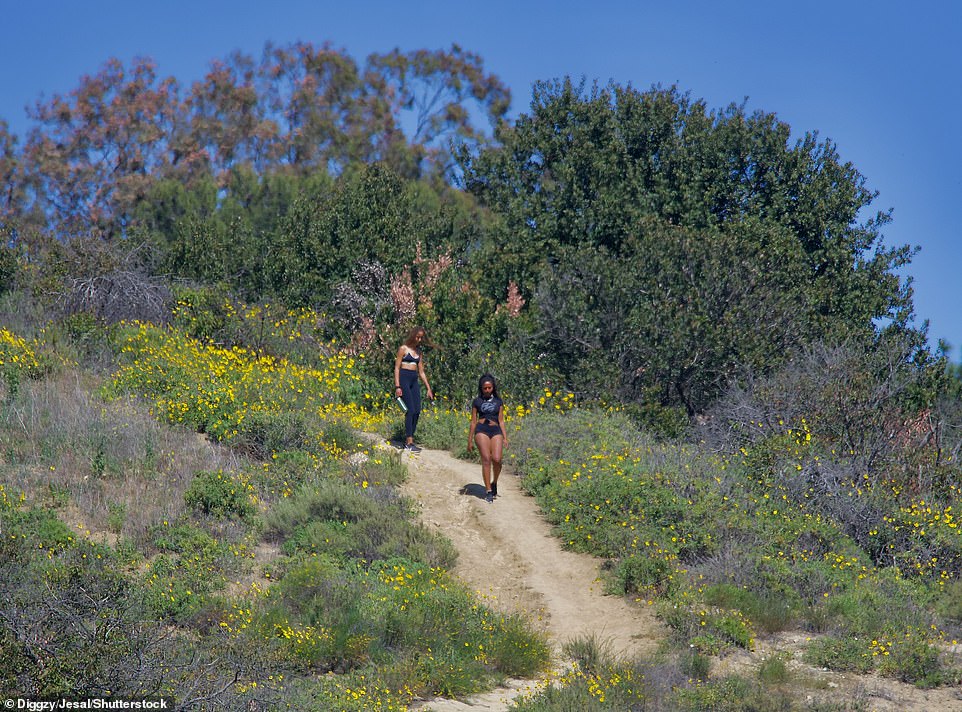 Sasha and Malia both seemed to be in good spirits throughout their workout, which saw them taking in some stunning scenery and views 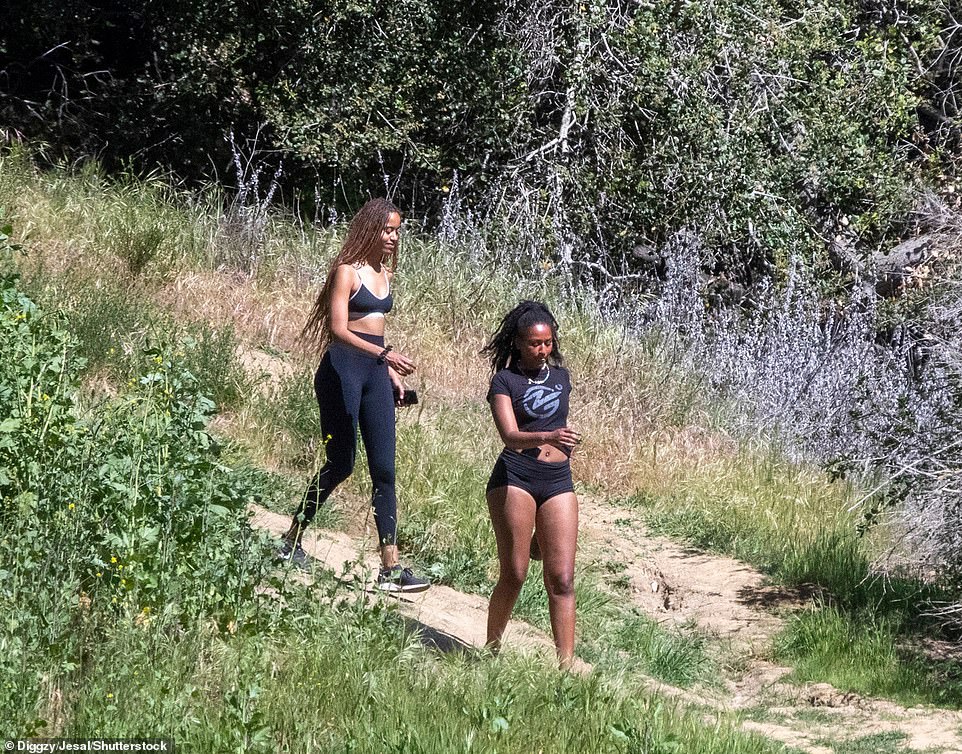 Sasha led the way down a hill, keeping a close eye on the ground so as to avoid a misstep 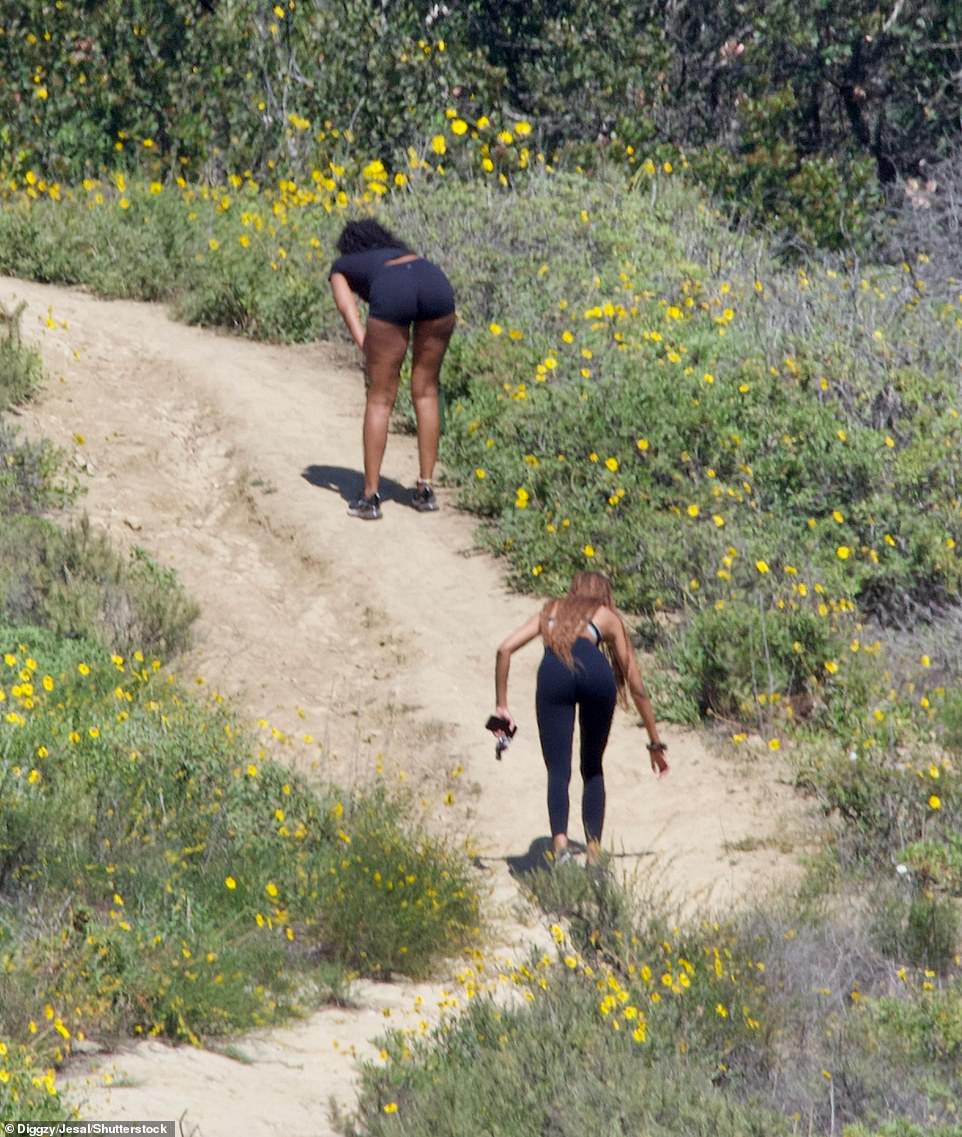 At one point, the sisters appeared a bit overwhelmed by the effort of their climb; they were seen bending over in an apparent effort to catch their breath 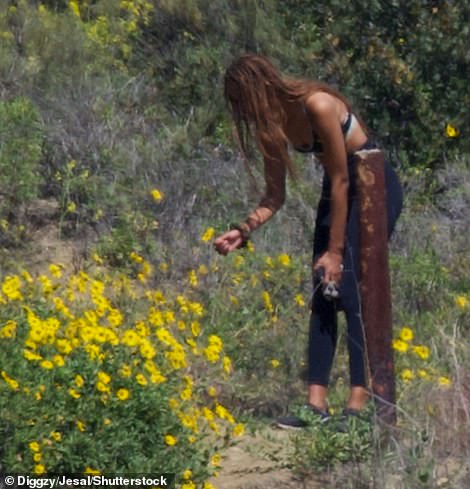 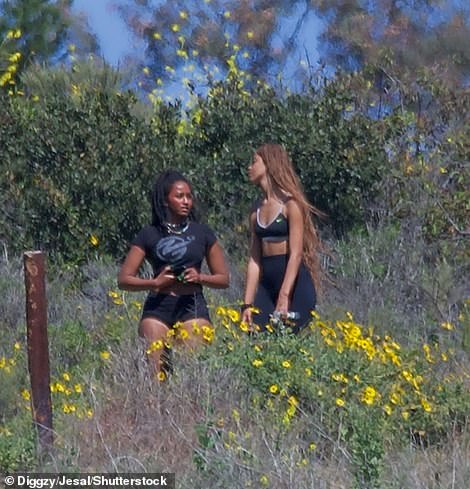 Stop and smell the… wildflowers! The girls took a brief break from their grueling walk in order to look at some pretty yellow wildflowers, with Malia even stooping down to pick one of the blooms

Hikes have long been a favorite pastime of LA-based celebrities, who are regularly photographed in the Runyon Canyon area, which is known for its varied trails and stunning views of the city – and the iconic Hollywood sign.

Oscar-winning actress Jennifer Lawrence was seen enjoying a hike in the same area earlier this month, when she was pictured for the first time since giving birth to her first child with husband Cooke Maroney.

Ashley Benson, Lucy Hale, Camila Cabello, Rita Ora, and Justin Bieber are just a few of the other stars who have been pictured out on hikes in recent months.

Sasha and Malia were not accompanied by any security or Secret Service; while former Presidents and their spouses are granted Secret Service protection for life, even after they have left the White House, that same policy only covers children who are under the age of 16.

The Obama sisters lost their Secret Service protection shortly after their father left the White House, however they are often seen accompanied by agents whenever they are in the company of their mother and father.

Sasha and Malia’s outing comes just days after their father, former President Barack Obama, 60, revealed on Twitter that he had tested positive for COVID. 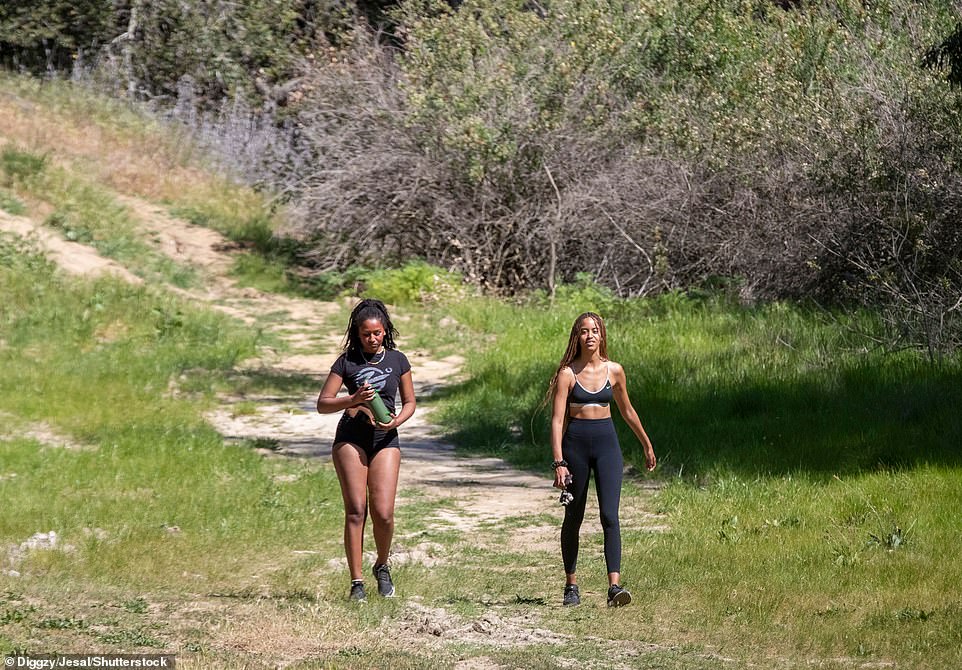 Made it! Sasha and Malia have both relocated to the West Coast in recent months 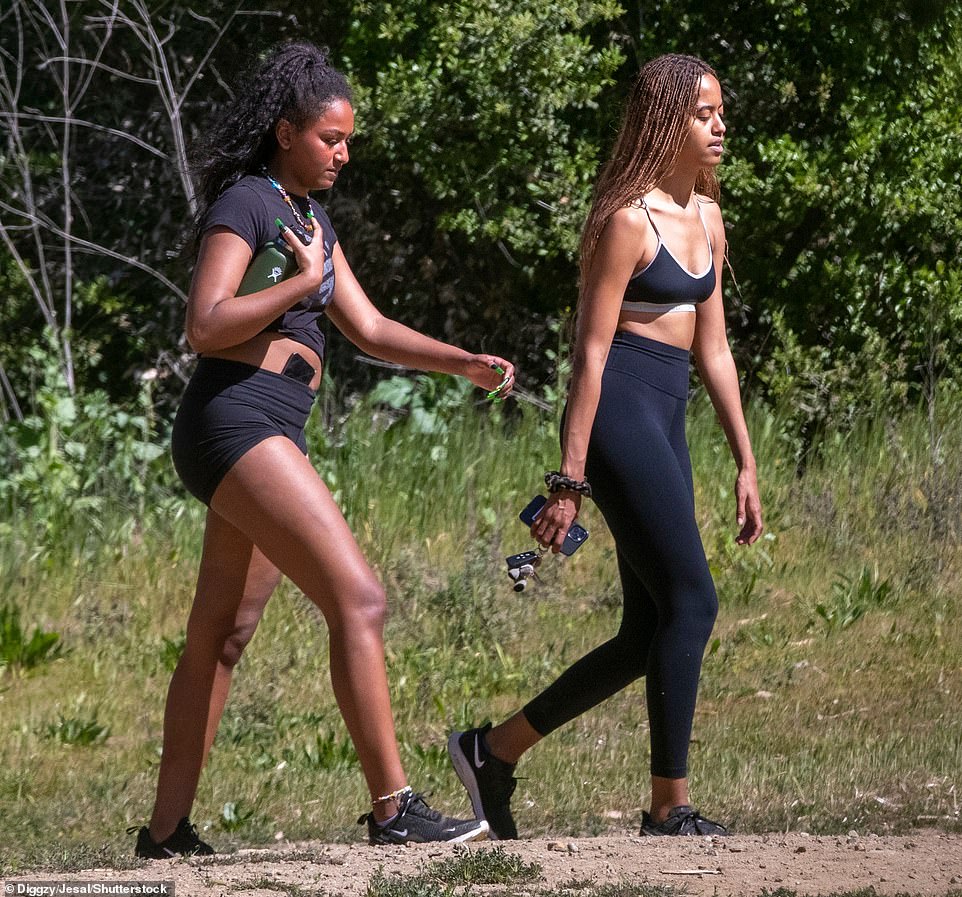 Taking a break: Earlier this year, it was reported that Malia, who graduated from Harvard in the spring of 2021, had scored a position on the writing staff of a new Amazon project by Donald Glover 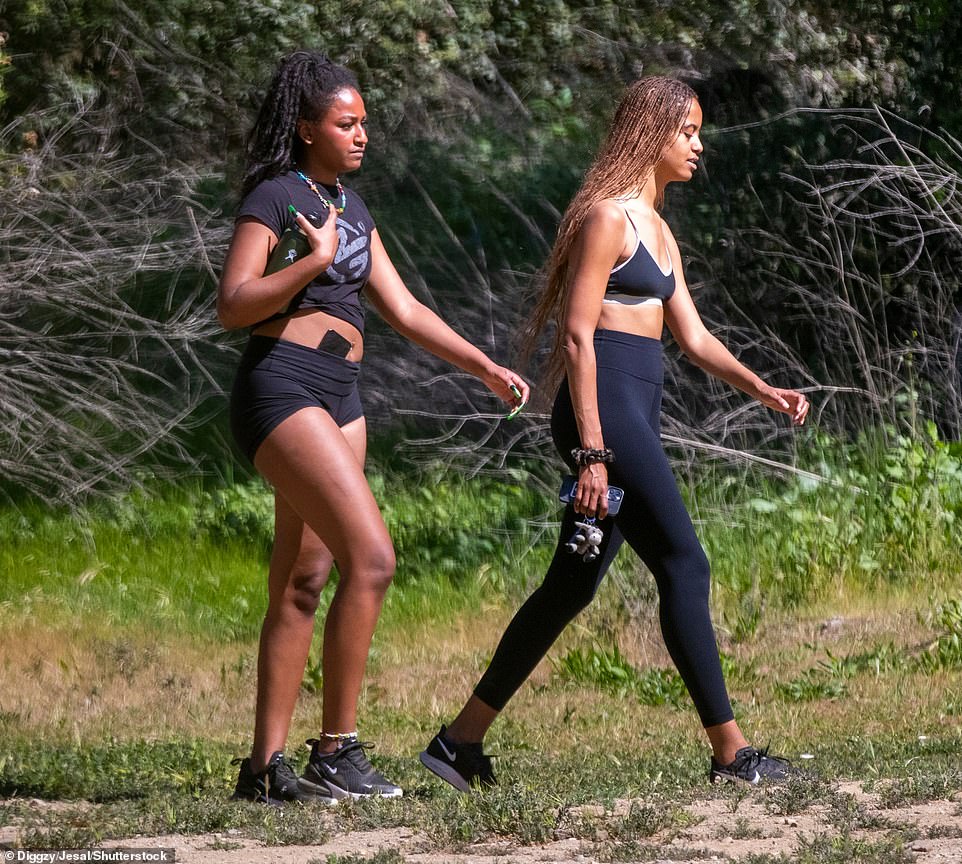 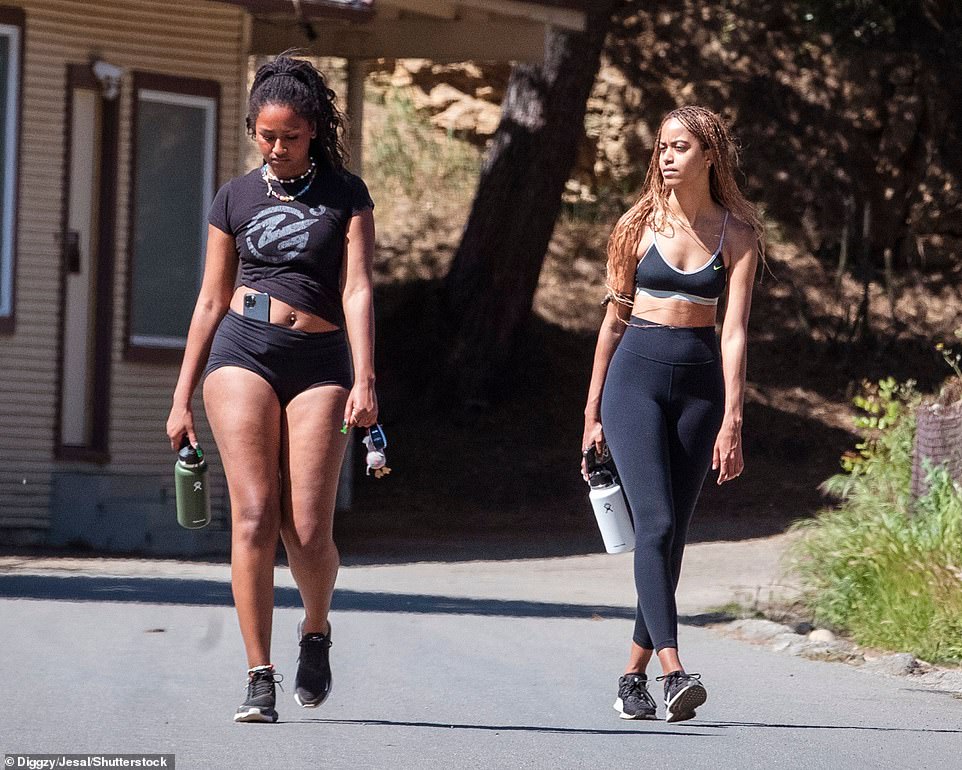 The girls were not accompanied by any form of security; former Presidents and their spouses are given Secret Service protection for life, but that same policy only applies to their children when they are under the age of 16 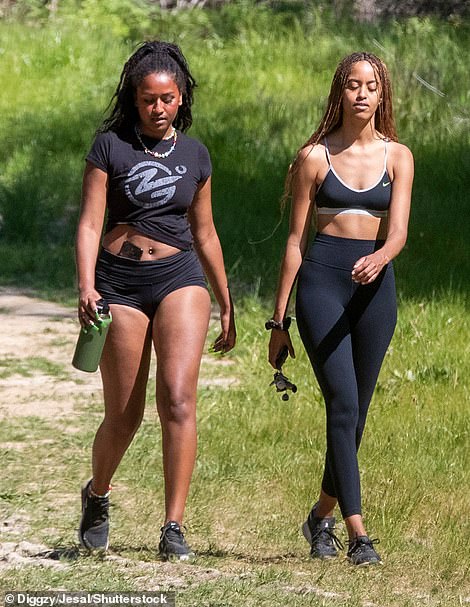 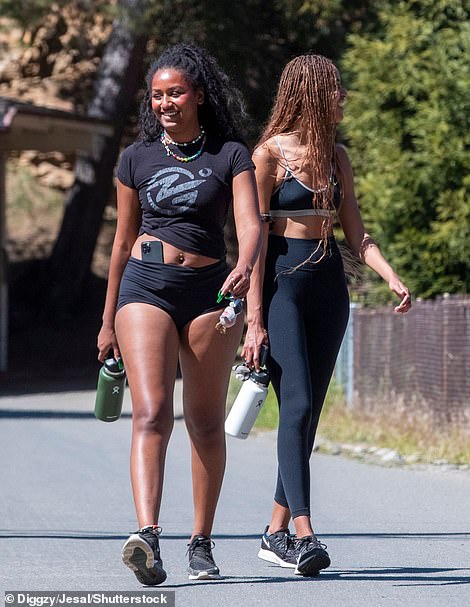 In a post shared on his account on Sunday, the father-of-two said that he suffered from a ‘scratchy throat’ but was otherwise ‘feeling fine’, adding that his wife Michelle was still negative for the coronavirus.

‘Michelle and I are grateful to be vaccinated and boosted, and she has tested negative. It’s a reminder to get vaccinated if you haven’t already, even as cases go down,’ Obama concluded his post.

He did not add whether or not his daughters had been tested, having seen their mother just days before Obama shared the news about his positive test result.

It is not thought that Obama came into contact with Sasha and Malia, who both relocated to the West Coast earlier this year.

Sasha and Malia have have, by all accounts, adapted quickly to the Hollywood lifestyle. They have been seen out and about on several occasions since moving to California, including last week when they were enjoying a visit from mom Michelle.

The trio were seen dining out at new Hollywood hot spot Mother Wolf, the latest restaurant offering from acclaimed chef Evan Funke, which has been frequented by a host of A-listers, including Beyonce and Jay-Z, and Kanye West, since its opening in January. 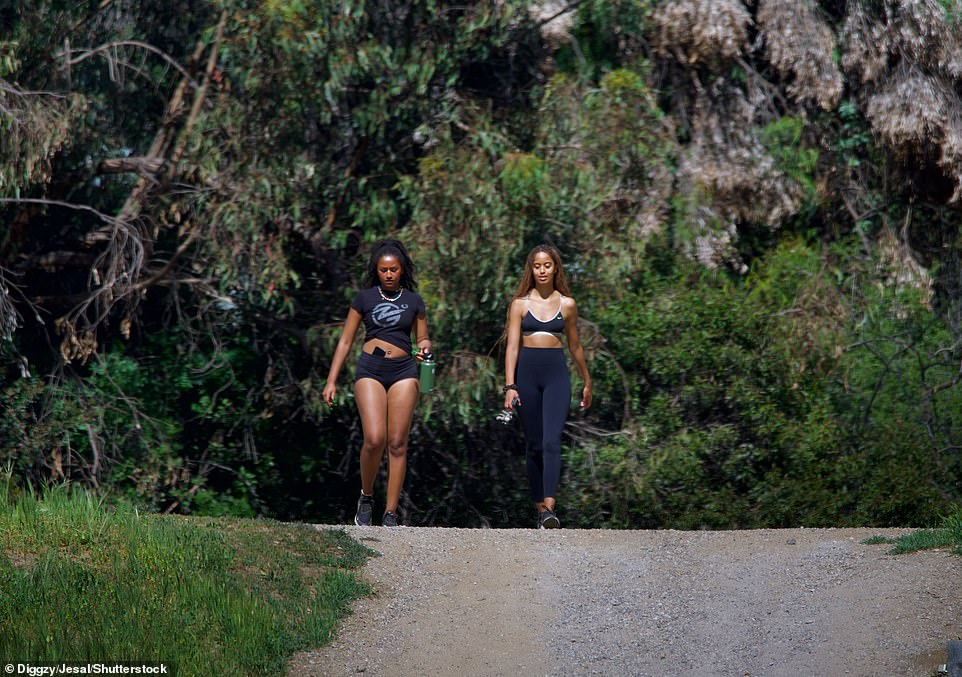 Sasha and Malia were seen chatting happily during their stroll 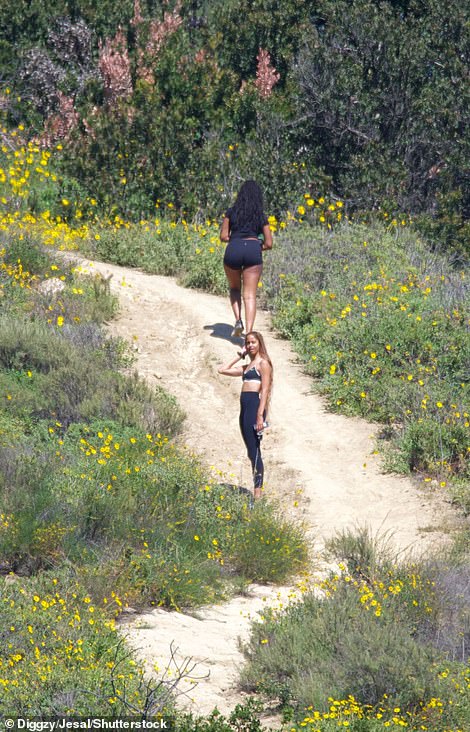 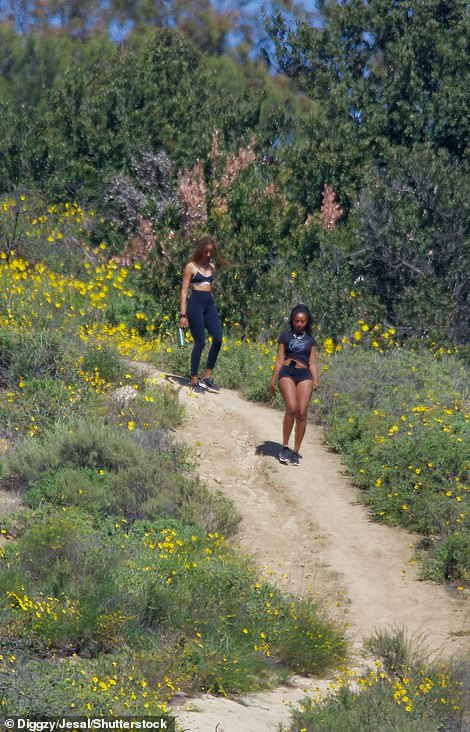 Despite the steep terrain, both girls seemed relaxed and happy as they tackled the hilly hike 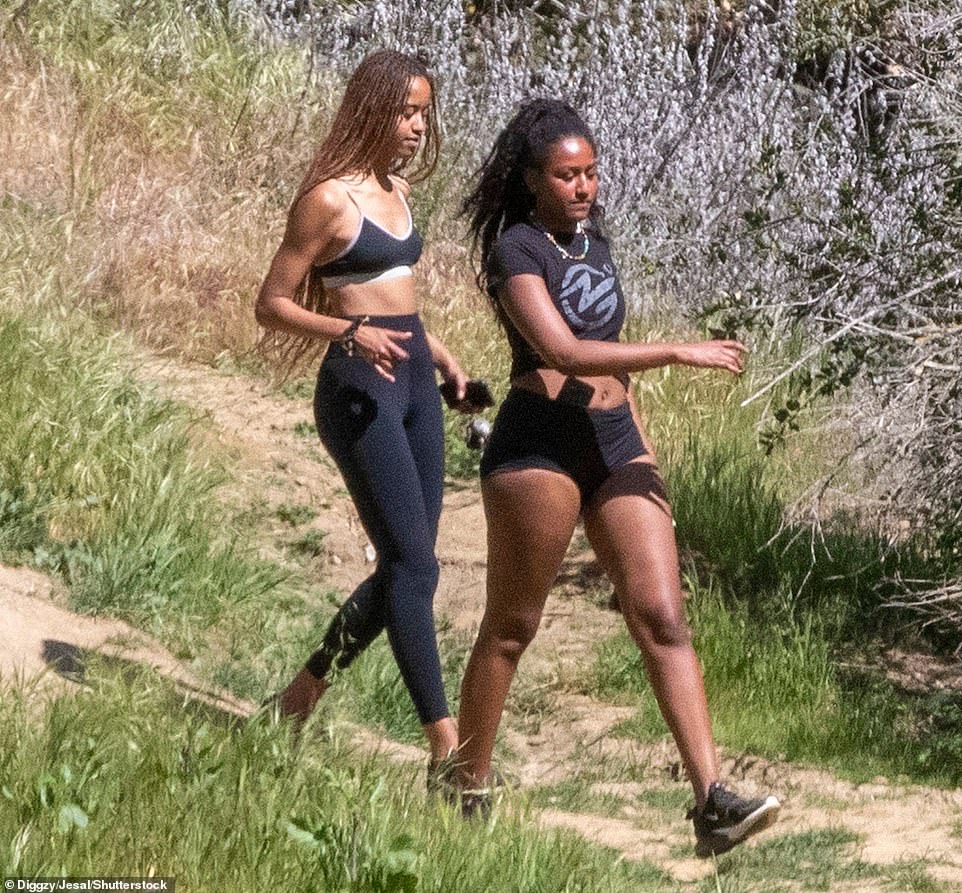 Los Angeles is famed for its scenic hiking trails, which are regularly enjoyed by celebrities in the area

However, in addition to their busy social schedules, Malia and Sasha are also both focusing on their futures in Los Angeles.

Earlier this year, it was reported that Malia, who graduated from Harvard in the spring of 2021, had scored a position on the writing staff of a new Amazon project by Donald Glover.

She’d long shown an interest in filmmaking — she interned on the set of Extant in high school and with The Weinstein Company in 2017 — and is now working on an unnamed project for Amazon in the City of Angels.

Meanwhile Sasha is believed to have transferred to a school in California, after initially matriculating at the University of Michigan, where she first enrolled in 2019.

Rumors on social media suggest that she is now a student at the University of Southern California, with one Twitter user posting in November that Sasha had ‘left Michigan for USC’.

If Sasha did, in fact, transfer, her classmates certainly seem to be respecting her privacy, as the move has been kept fairly under-the-radar.