Nearly 20 years ago, I sat by the hospital bed of Barbara Amiel – her choice of location for a fun girls’ outing – and offered to write her biography.

To me, she seemed a modern-day Madame Bovary – a girl from Hendon, North London, who dreamed of escape from provincial life and who became a famous writer and society hostess, wife to Conrad Black, the newspaper baron and, later, jailbird.

My offer wasn’t accepted. Instead, she has just published her own memoir, Friends And Enemies.

Barbara Amiel (pictured) has finally penned her own memoir, ‘Friends And Enemies’ which has now been published

The 600-plus pages are less Madame Bovary, more the Ancient Greek enchantress Medea: full of passion and fury, fierce in her love for her husband, scathing about all those who have crossed her, opening every artery in a story which leaves you tip-toeing away to say your prayers.

Some early reviews have rebuked Amiel for not being sorrier for her role in her husband’s downfall – sentenced by a US court to six and half years for fraud and obstruction of justice.

Did they have any idea whom they were dealing with? Tragic heroines do not apologise.

Amiel, 80 in December, ends her book with seven pages of ‘The Lists’, naming all her ‘Friends’ and ‘Enemies’. It is accompanied with the warning: ‘I am going to try to enjoy the remaining time left to me. And bugger off to the whole damn lot of you! We’re still here.’

I worked at The Daily Telegraph for many years while her husband owned the newspaper group. Looking back now, I rub my eyes as if walking into an empty ballroom in dustsheets where once there were waltzes and gaiety.

At the centre of it all was this Jewish girl from North London, whose parents were both handsome and suicidal by nature. By the time I met her, she had kicked the traces of childhood, using her sharp columnist’s brain and cat-like beauty as the foundation for her Geisha feminism.

Indeed, she describes mainstream feminism as having begun ‘as a perfectly decent movement but has metastasized into a plague of boils on the body politic’.

She was the talk of London. I remember first seeing her at the reception desk of a Brighton hotel at the start of a party political conference. She was Katharine Hepburn standard – poised and trim, with a slight edge of impatience.

I was a single mother, working on the comment pages of the Evening Standard, having taken a conventional path through local newspapers. She was already the first woman editor of the Toronto Sun and three husbands down.

Barbara’s style of writing was part showgirl, part think-tank, rich in research and policy. She was a star. She was up for any assignment, including – fleetingly – living with Tony Blair and his wife Cherie in their house in County Durham while doing a cover story on them for a magazine. She described Cherie’s reaction at having to share a bathroom with her – ‘so frosty you could see her breath’.

Bathrooms became part of Barbara Amiel’s upwards trajectory. As she and her husband straddled fortune and power, she complained of having to share a bathroom with him at the World Economic Forum in Davos.

The experience was a ‘clincher in testing our compatibility’. 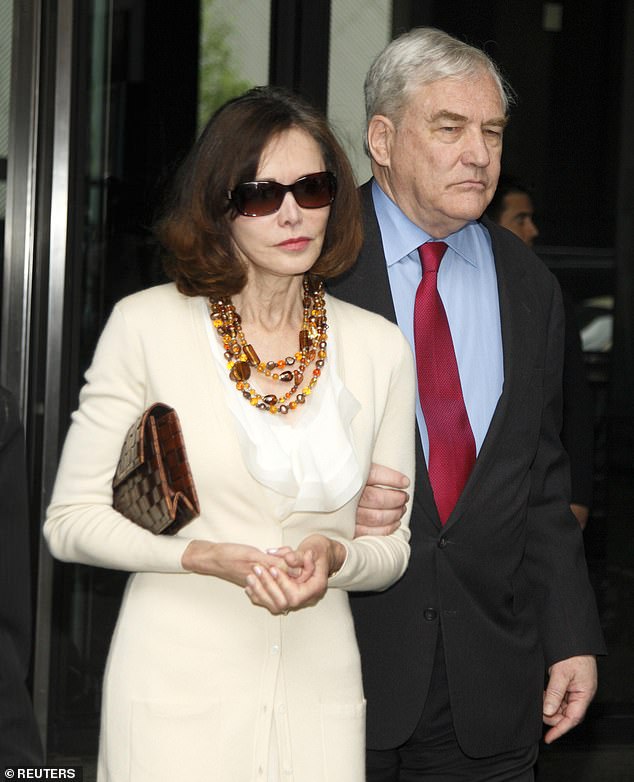 Barbara with her husband Conrad Black, the proprietor of the Telegraph group, who was jailed in America on charges of fraud and obstruction of justice

There was also the occasion when she and Ghislaine Maxwell walked along the sands at Palm Beach together. They enjoyed a giddy conversation about which of them had the most bathrooms in the various houses they controlled. Barbara had 39. ‘I win!’ said Ghislaine.

The London journalistic scene which Barbara adorned in the 1990s was rakish and commercially successful. We stayed up late drinking in bars, and she was often the subject of conversation.

We all marvelled at her supposed route to Conrad Black’s heart. She had apparently gasped at a dinner party on hearing that he was the author of the book she had just read on Quebec premier Maurice Duplessis. We loved the calculated chutzpah of pretending to be interested in Duplessis.

Now I have read her memoir, I realised that she had other tricks.

In true theatrical style, this is a mere prelude to her piece de resistance. Walking down New York’s First Avenue, she admires a dog and then its owner. She compliments the owner, a tall Afro-American matching the dog in groomed perfection.

‘We ended up in his apartment and during the predictable course of events on his floor he unpredictably sprayed my nude self with a can of whipped cream… The dog very carefully started licking it off me while his owner retreated to the sofa to watch.’

Necrophilia, she says, is ‘one of the few sexual practices I have not engaged in’.

As I say, this was the Nineties.

Looking back on Amiel’s columns, one thought led to another and the columns always ended with a metaphorical splash of whipped cream.

She was an entertainer as well as a polemicist. Sometimes her writing had a sustained force, which could be breathtaking. She would take her enemy’s argument, treat it seriously and then slash it to pieces. 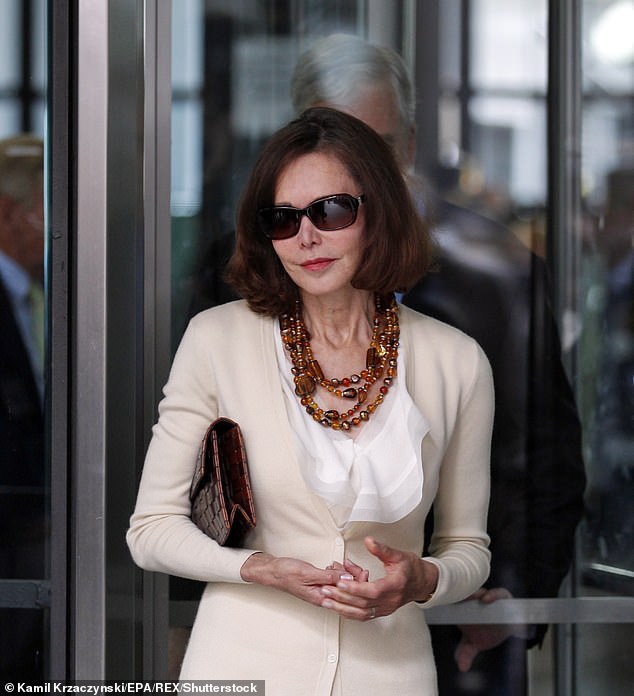 I remember the fuss at one of her parties when she quoted a former French ambassador who described Israel as a ‘s****y little country’. She then dissected her own crime of breaking a social confidence, broadened it into an analysis of society and showed an ironic sympathy over the ‘Jew’ problem.

Amid more taunts at liberal society, she revelled in the description of herself as a fascist bitch in a frock. She says: ‘Most women, whether rich or poor, working or unemployed, will at one point in their lives be called a “bitch” sotto voce or in print.’

As for the ‘Rich Bitch’ tag, she says: ‘I was a fiscally irresponsible, overdressed, walking example of why it would be far more helpful to give women courses in financial planning than gender studies.’

In the mid-1990s, I was Telegraph editor Charles Moore’s deputy.

Barbara described us as ‘the Actress and the Clergyman’, and I was certainly less high-minded than the editor.

I was put in charge of two of our most high-profile columnists, Boris Johnson and Barbara herself.

Boris did not much like having anyone in charge of him and disappeared into his office to bash out columns undisturbed. Barbara liked to talk things through and our conversation became more intimate over the years.

I was able to tease her about frocks and galas while enjoying access to her parties. I remember walking round the Chelsea Flower Show with her one summer and stopping to look at an exhibition of dolls’ houses. She bent down and sighed: ‘Wouldn’t it be lovely to live in one of those. So few rooms!’ This was the wife of a man whose Kensington home – with four bathrooms, a swimming pool, plunge pool and passenger lift – was advertised for sale at £17.5 million in 2004. She looked up at me laughing at her and became sheepish.

Also, her insistence that she dreaded parties struck me as absurd. But I was well aware that she battled illness and terror. The reason that I met her in a hospital to discuss writing her biography was that she suffered a blood disorder which needed regular hospital visits.

As someone who has said ‘opera and sex are my two great passions’, she has an operatic sense of her own tragedy. So redolent of Verdi’s great courtesan Traviata.

She mentions in her book our courtship, which was never quite friendship because she was the wife of my newspaper’s proprietor. I remember the incident she accurately describes. She had asked what I was doing one evening, and I thought she sounded wistful. I told her that I was having a drink with my friend, actor John Malkovich.

I hesitated and then added: ‘Would you like to join us?’ She said that she would. 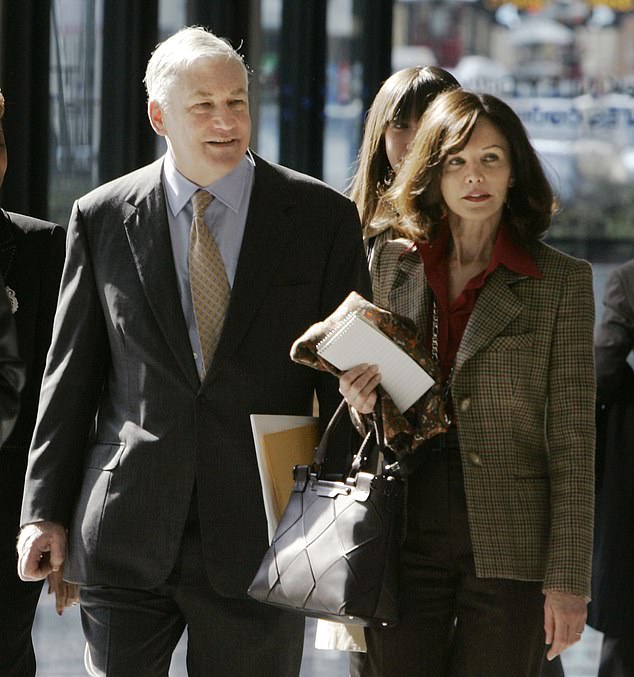 After an hour or so, she had not arrived and we were deciding where to go for dinner. Then I noticed her hovering in the doorway. She said she was late because her hairbrush had got caught in her hair and she had to cut it out. It was pure Bridget Jones.

I wondered if she might be able to cross the divide, back from proprietor’s wife to the rackety, journalistic crowd she had left behind. Should I ask her to join us for dinner? But then I thought we would have to police ourselves and it would not be grand enough for her. We said goodbye. I think, though, she might have liked it below stairs.

A theme of her book is her failure to manage staff or keep any kind of household accounts.

I remember once discussing with her my disappointment that a respected news executive was leaving the newspaper and she replied that she had also lost her butler.

For a long time I dined out on the story of her once inviting me to a New York gathering – then asking if I could bring some dry cleaning for her from London on the plane.

But it would have been weedy to have been offended. For I also knew her and Conrad Black to be solicitous towards their personal staff and we all benefited from their largesse.

I was given tickets to the opera when the Blacks could not make it and I attended their parties with their trademark guest-mix from geo-politics and showbusiness. Then the great fall happened.

Conrad Black was accused of misusing company funds to keep up the lifestyle that he and Barbara had created. Amiel’s quote to American Vogue – ‘I have an extravagance that knows no bounds!’ – came back to haunt them.

She suddenly found her credit cards declined in Bloomingdale’s, she was fired by her hairdresser, rebuffed by the manageress of the Manolo Blahnik shoe shop in Manhattan and friends shunned her. 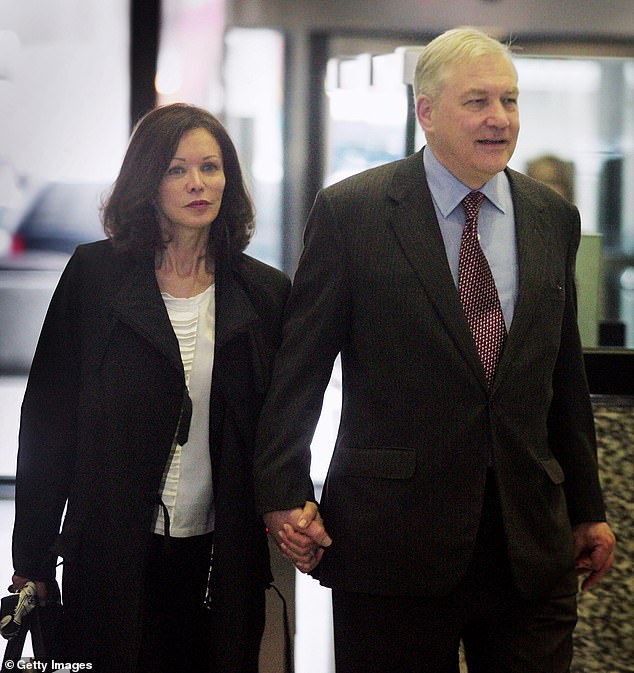 When Black was sentenced by a Chicago court to 78 months in jail, back in London, we Telegraph journalists took a cynical view and there were bets on how soon Barbara would abandon him. The top name of the list for husband No 5 was billionaire Warren Buffett.

In fact, Barbara was unfailingly loyal to her husband, and her book, rightly or wrongly, is a love letter to his fortitude.

Of course I scanned ‘The Lists’ of her enemies at the back of her book, having read her say: ‘For me, the only revenge would be to see our persecutors guillotined. I have worked out 1,001 ways to see them die, beginning with injecting them with the ebola virus and watching.’

I noted that I am neither a friend nor enemy.

Charles Moore did invite me to a small dinner for her during the prison years, and I was keen to join, but Barbara said she would rather not see me. Last week I was told that she has an ‘unrequited fixation with me’. Perhaps I had not been quite loyal enough. Maybe I was still just staff.

Now that she has written her Book of the Dead, I wish her peace of mind. What a life. What a woman.