Former first daughters Barbara Bush and her fraternal twin Jenna Bush Hager bravely opened up their iPhones to the world, revealing a series of intimate messages between themselves and their family members – while demonstrating just how much their 71-year-old father loves to use emoji and GIFs.

The 35-year-old sisters sat down with Derek Blasberg for his Vanity Fair web series, Derek Does Stuff with a Friend, and one of the first things the writer finds while scrolling through Barbara’s phone is a string of emoji-filled messages from someone saved as ‘Popsicle.’

‘Popsicle is our dad,’ Barbara says of their father, former President George W. Bush. ‘Every morning Popsicle texts me an illustrated meditation.’

Hand it over: Barbara Bush and her fraternal twin sister Jenna Bush Hager gave Derek Blasberg their cellphones during an episode of his Vanity Fair web series, Derek Does Stuff with a Friend 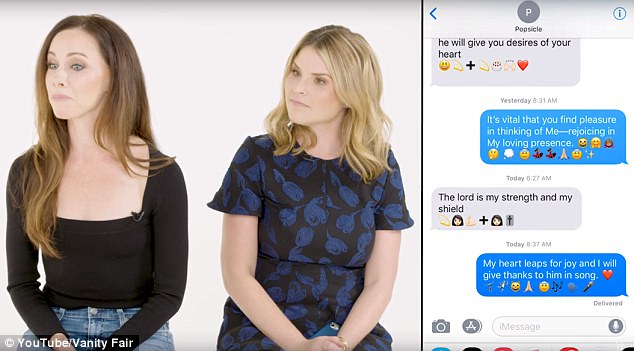 Big reveal: Barbara has her father, former President George W. Bush, saved in her phone as ‘Popsicle,’ and he sends her daily illustrated religious meditations

‘Every morning?’ Derek asks, prompting Jenna to wonder why she doesn’t get the same treatment.

‘What does he text you every morning?’ Barbara asks, and Jenna admits: ‘Nothing.’

She adds: ‘I guess this proves there is a favorite.’

Derek takes a moment to read one of the religious meditations out loud.

‘It’s vital that you find pleasure in thinking of Me — rejoicing in My loving presence,’ Derek says before jokingly asking: ‘Now is he talking about himself?’ 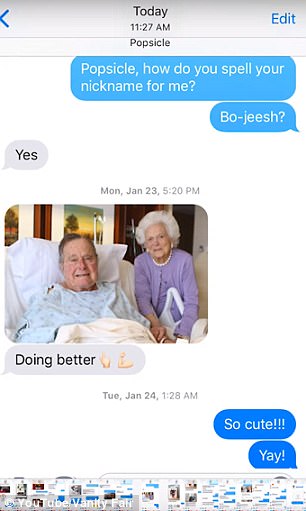 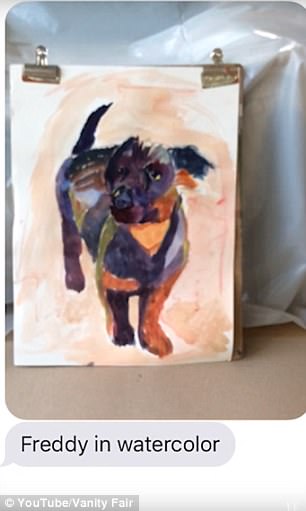 Connected: The former president also sends her plenty of pictures, including one of his parents in the hospital together and some of his recent paintings of their family dog 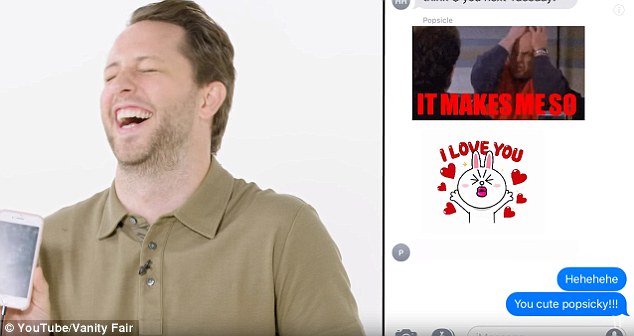 Too funny: Derek bursts into laughter when he learns that their father sends them GIFs all of the time

The Bushes clearly love their nicknames for each other, and in another text message, Barbara is asking her dad how he spells his nickname for her, Bo-jeesh.

The former president also sends her plenty of pictures, including one of his parents, George H.W. Bush and Barbara in the hospital together and some of his recent paintings of their family dog.

‘He is a pet portraitore,’ Jenna says, prompting Derek to jump in to say the word she was looking for, ‘portraitist.’ 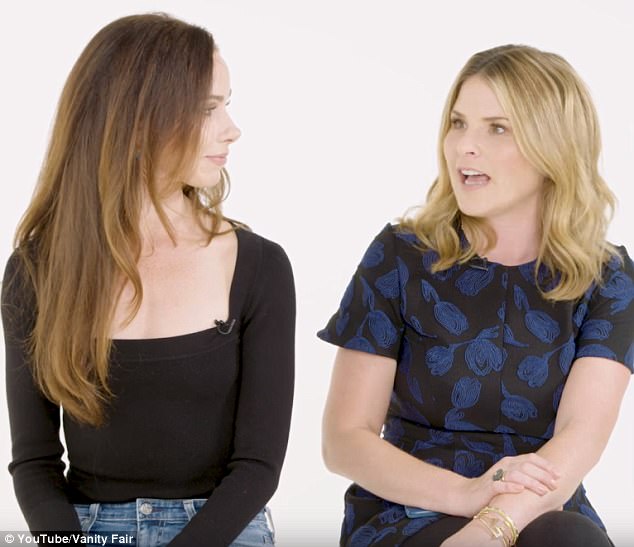 Who knows? ‘He likes to communicate in a GIF — which is strange because I don’t know where he gets them from,’ Jenna explains 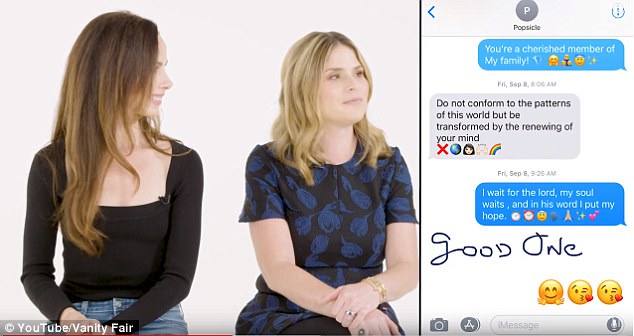 ‘He’s high-tech’: When he’s not using emoji or GIFs, their dad likes to add handwritten words to his texts

The next round of text messages from their dad features a Seinfeld GIF and one with a rabbit that says, ‘I love you.’

‘He likes to communicate in a GIF — which is strange because I don’t know where he gets them from,’ Jenna explains, and Barbara insists: ‘I’ve never sent a GIF.’

When he’s not using emoji or GIFs, their dad likes to add handwritten words to his texts.

While scrolling through Barbara’s phone, Derek says he doesn’t want to put the twins at odds, but their seems to be a lot of messages between her and their father. 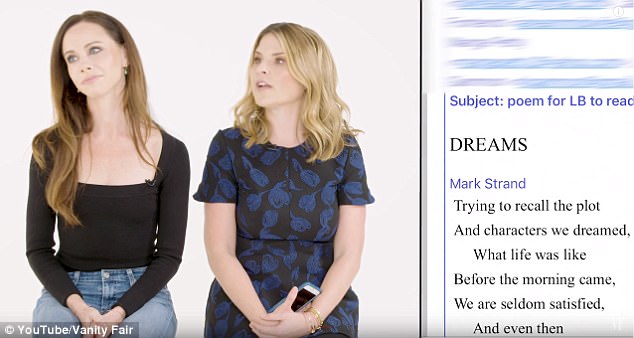 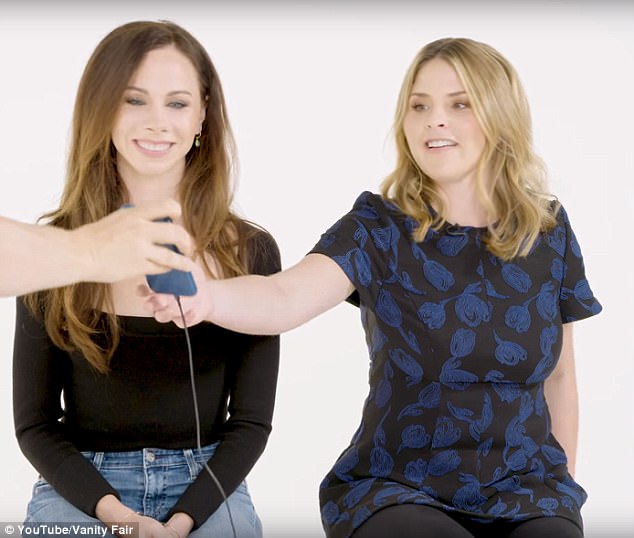 Next up: Jenna gives Derek her phone after he is done scrolling through Barbara’s messages 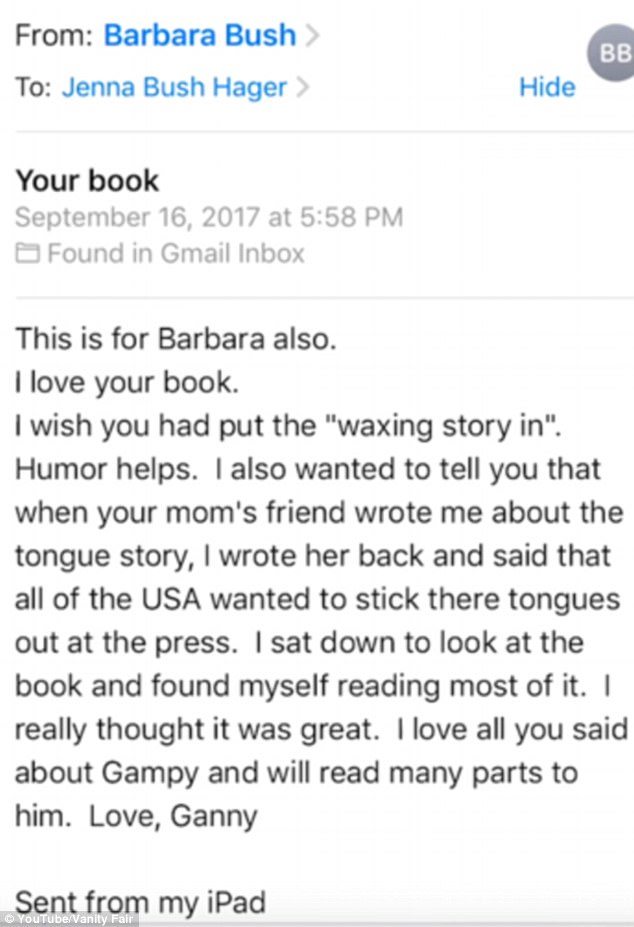 Derek goes on to play a voicemail message to Barbara from their mom, Laura Bush.

‘Barbarini, it’s mother. Just calling to chat,’ the former first lady says. ‘Give me a call if you have time to talk. Bye.’

After listening to the message, Jenna jokes: ‘Barbarini — that’s when she has two many martinis.’

Their mom also emails Barbara poems, and the eldest twin explains that’s how she likes to communicate.

Jenna is up next, and Derek immediately finds an email from their ‘Ganny,’ former first lady Barbara Bush.

The twins are currently promoting their new memoir, Sisters First: Stories from Our Wild and Wonderful Life, and last month their grandmother used her iPad to email Jenna about it.

‘This is for Barbara also,’ she writes. ‘I love your book. I wish you had put the “waxing story in.” Humor helps. 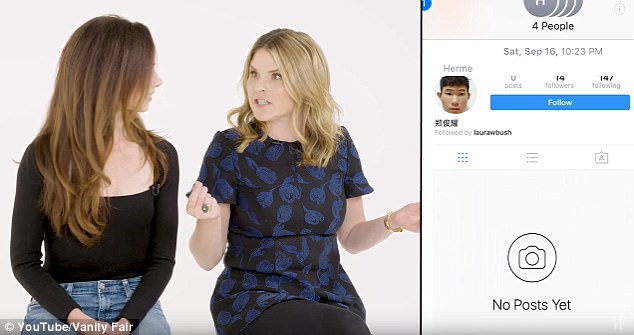 Surprise: Derek finds that Barabra had revealed to their family that their mother is following a stranger named Herme on Instagram 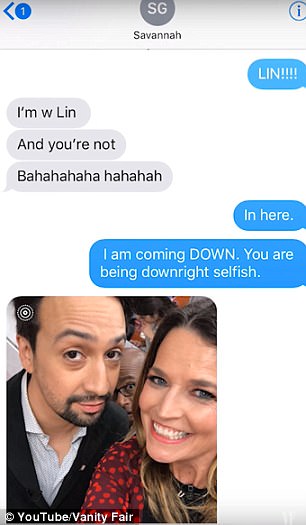 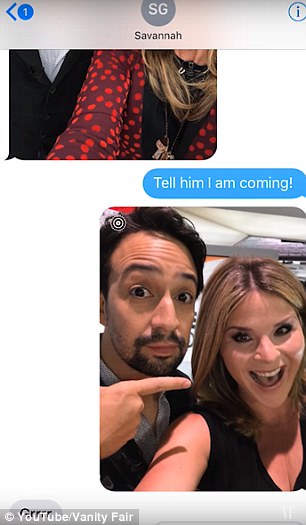 Fan club: Jenna’s text messages to her Today show co-star Savannah Guthrie are all about their love for Hamilton creator Lin Manuel Miranda

‘I also wanted to tell you that when your mom’s friend wrote me about the tongue story, I wrote her back and said that all of the USA wanted to stick their tongues out at the press,’ she adds.

‘I sat down to look at the book and found myself reading most of it. I really thought it was great. I love all you said about Gampy and will read many parts to him. Love, Ganny.’

Derek immediately wants to know what the ‘waxing story’ is, and the twins explain that their cousin Wendy tried email Barbara questions about waxing her bikini line.

‘She thought she emailed me, but she emailed my grandmother instead — who immediately wrote back with advice on waxing and Nair,’ Barbara recalls. 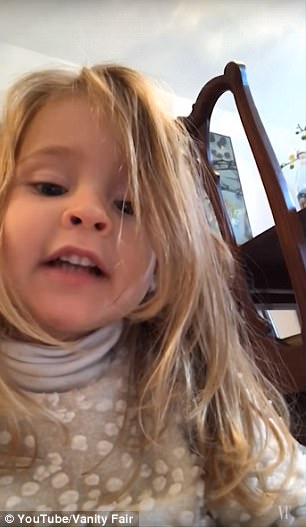 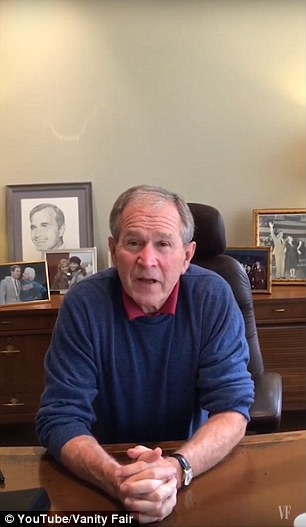 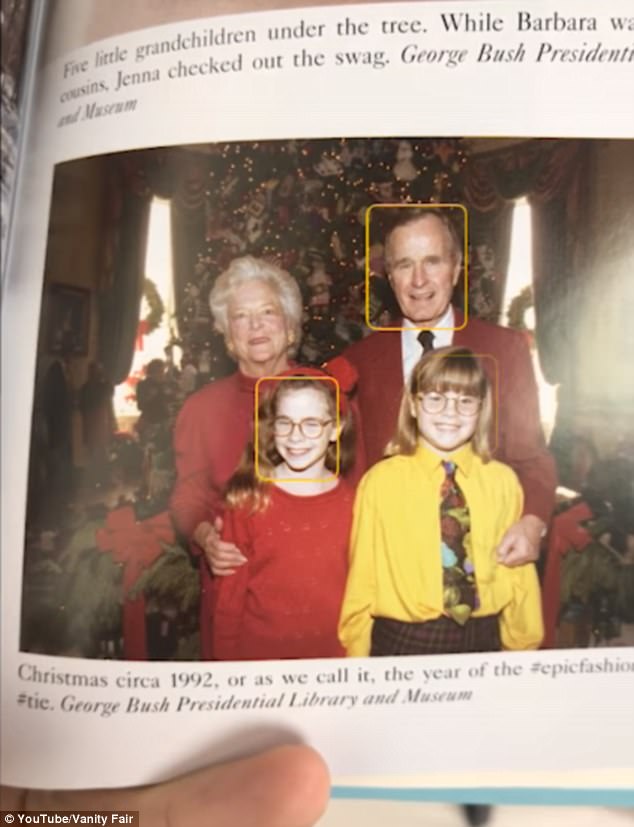 What were you thinking? Derek pokes fun at some of the twin’s childhood outfits while flipping through their memoir 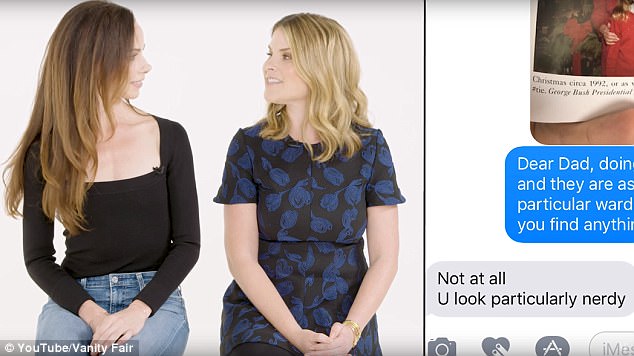 Say what? Derek sends a photo of one Jenna’s childhood outfit’s to her father, and he tells her she looks ‘particularly nerdy’ when he responds

While digging through Jenna’s text messages, Derek finds that Barabra had revealed to their family that their mother is following a stranger named Herme on Instagram who has zero posts and just 14 followers — including the former first lady.

‘Merry Christmas Jefe,’ Mila says in the clip. ‘I wish you would come to the North Pole with me and go ice skating and scoot with me. Love to Jefe.’

Jenna’s father responded with a video of his own, and his clip sees him sitting at his desk before giving his very presidential message to Mila.

‘Hi little Mila. I love you. I can’t go to the North Pole with you, but I can go to our ranch at Crawford,’ he says. ‘I am looking forward to seeing you. Tell Poppy hello, and I will see you in two days.’