Barbara Bush had dealt with the crushing sadness of a death worse than her own when Robin, her first and only daughter at that time, died of leukemia at just three-yeas-old.

The family matriarch has opened up in various interviews about her love for daughter Robin, how they sought treatment for her despite their beautiful daughter’s death sentence, and how she and George’s bond grew stronger in the face of every parent’s worst nightmare.

In an interview with granddaughter, Jenna Bush Hager for ABC News in 2012, Barbara said she that at the time of Robin’s birth, she and George had a rambunctious boy in their home – George W.

Barbra said ‘All this wonder needs is a counterpart, a legitimate Christmas angel.’

And they were gifted just that on December 20, 1949. ‘Gampy (what the grandchildren call George H.W. Bush) and I were very young, it was a very big day for us, a  beautiful little girl. She was quiet and gentle and had lovely little blond curls.’

Barbara’s heart and agony: Barbara Bush with daughter Robin (together) at their Greenwich, Connecticut home. Robin would die at just three-years-old after her battle with leukemia 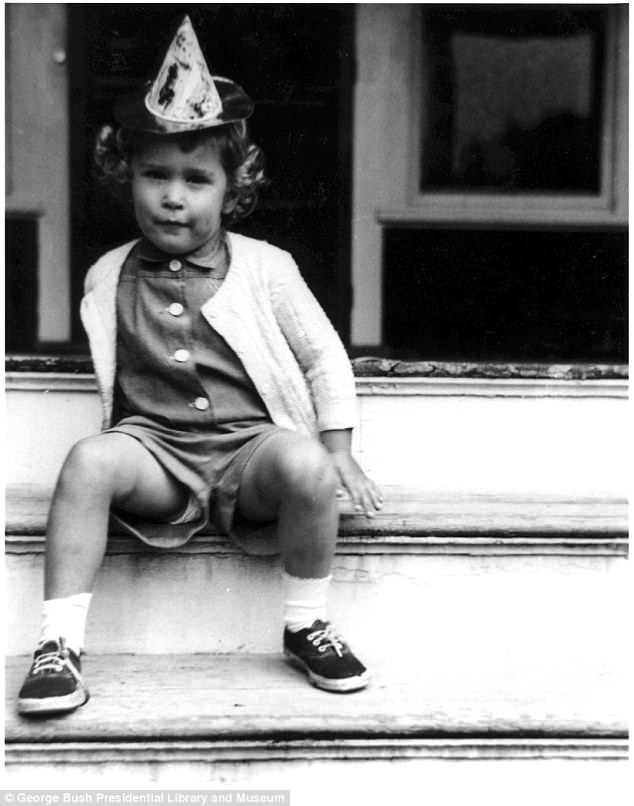 Robin (pictured) was two months shy of her fourth birthday when she died after her fight with leukemia. Barbara and George were there when she died 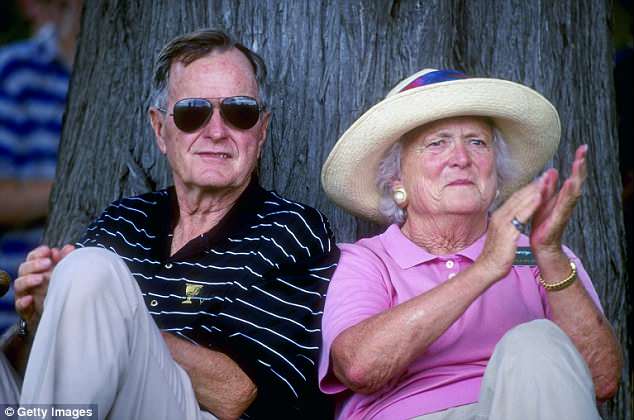 Barbara has said the death of her daughter is something she never got over, but she felt her love around the family throughout the years

However, things started to change for her daughter. She had complained to her doting mother that was tired. ‘She was listless, she didn’t want to do anything. She wanted to rest and and go out to watch cars go by.’

Barbara called the doctor, and said she believed her Robin was having a bought of spring fever. The doctor laughed it off, and told them to come in.

They went, Robin had some bruises on her, but nothing unusual for a child. The doctor took a blood test, and then called after the visit, to tell them the devastating news.

The doctor said ”My advice is take her home, love her and in about two weeks she will be gone.’

The Bushes had the means, and not ones to give up without a fight, they went from their home to New York’s Sloan Kettering Hospital. Even then it was the leading cancer hospital when little was known about the disease.

It was there that they sought treatment for their beloved daughter. Robin spent most of the last seven months of her short time on earth fighting for her life there.

She left only once for a family trip to Maine, her brothers none the wiser about their sister’s battle with cancer.

‘They took bone marrow tests which were painful and a lot of blood, and blood transfusions and poor Gampy had to leave the room every time she had a transfusion.’

‘Eventually the medicine that was controlling the leukemia caused other terrible problems. We called George, and by the time he got there after flying all night, our baby was in a coma. Her death was very peaceful. One minute she was there, and the next she was gone,’ Barbara wrote in her memoir.

‘I truly felt her soul go out of that beautiful little body. For one last time I combed her hair, and we held our precious little girl. I never felt the presence of God more strongly than at that moment.’

It was October, Robin died with her parents in the room, just two months shy of her fourth birthday.

The Bushes made a decision to give Robin’s little body to medical research, then had her buried in a family plot in Greenwich, Connecticut. 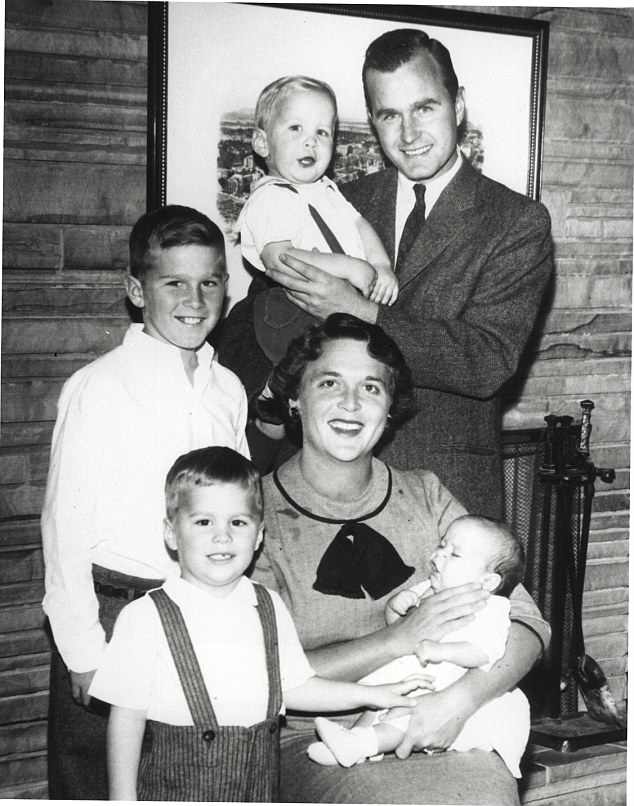 And four makes a family: Barbara said she and George wanted a Christmas angel to round out the family of boy’s and were delighted when their beautiful daughter Robin was born 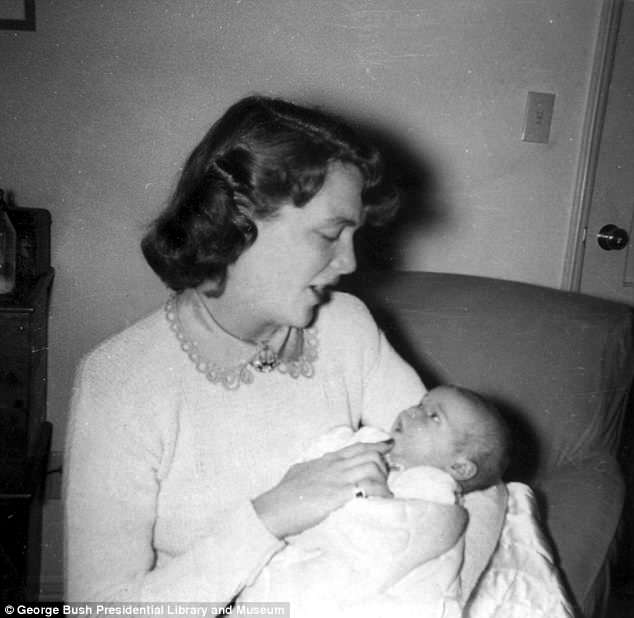 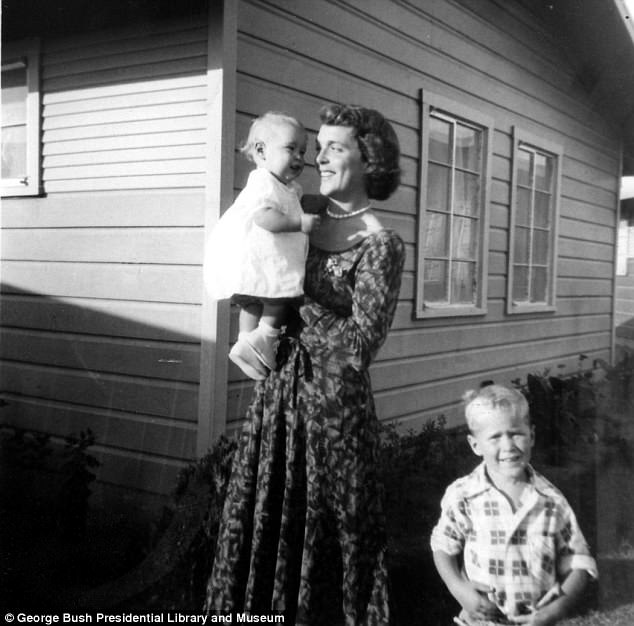 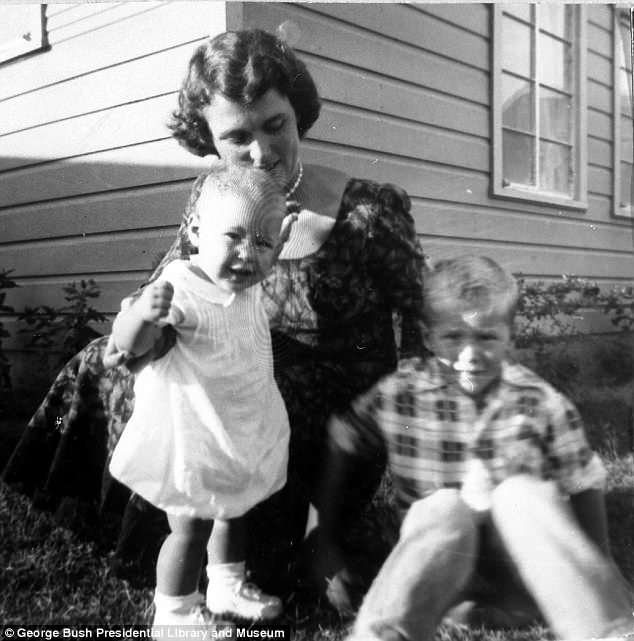 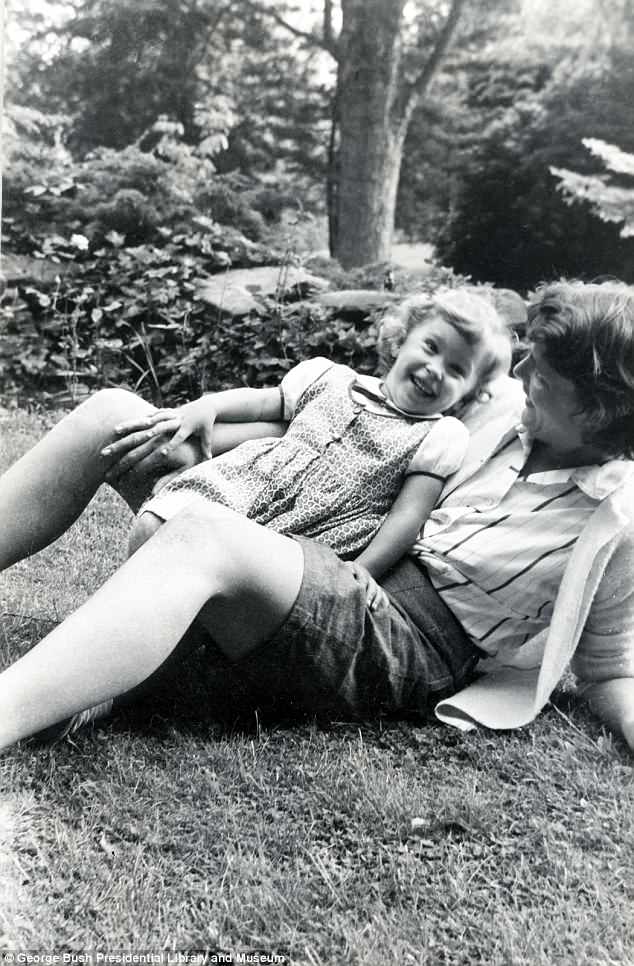 Robin and her mother, Barbara Bush in Greenwich, Connecticut in an undated photo

She told Hager the decision to give the body to research was an easy one: ‘It wasn’t hard. It made Gampy and me feel that something good is coming out of this precious little life. And today, almost nobody dies of leukemia.’

Her brother, George W. Bush, spoke about the day he learned of his baby sister’s passing.

‘I remember seeing them pull up and thinking I saw my little sister in the back of the car. I remember that as sure as I’m sitting here,’ he told The Washington Post in a 1999 interview.

‘He went running back to the teacher and said, “I’ve got to go. My mother and father and Robin are here”,’ Barbara Bush, recalled during a recent interview, of the day she told little George.

Although the crushing blow of losing their only daughter at the time could have tore another married couple apart, she marveled it brought them closer together.

George W. has said Robin’s death forged a bond with his mother as well, and he and Barbara felt responsible for helping each other through it.

In the Post profile form 1999, Barbara Bush described the moment she realized young George was acting up.

‘That started my cure,’ she wrote in her memoir. ‘I realized I was too much of a burden for a little 7-year-old boy to carry.’

At 28-years-old Barbara had suffered the worst death she could imagine in losing her precious daughter.

It has been said that her hair started to go white soon after Robin’s death. 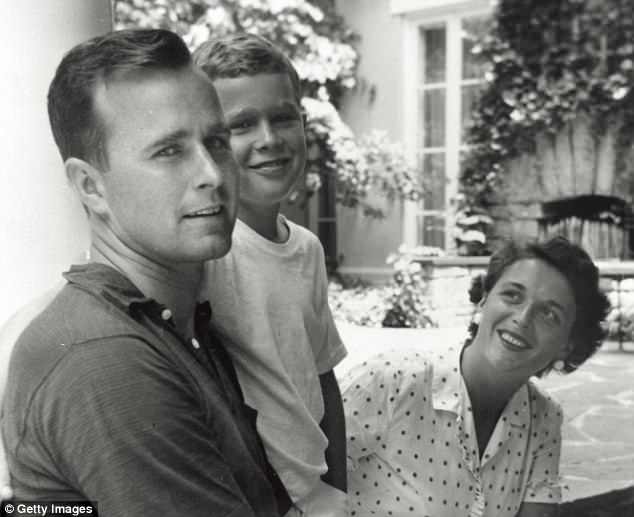 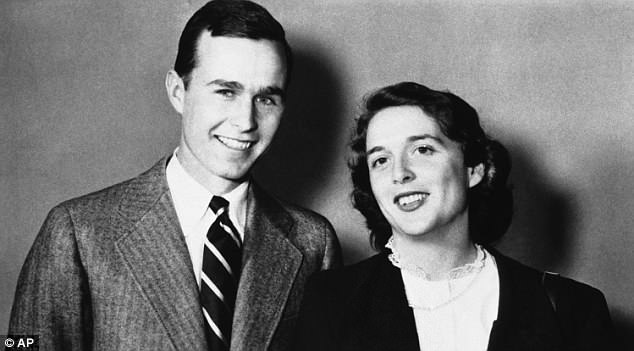 George Bush is shown with wife Barbara in 1945 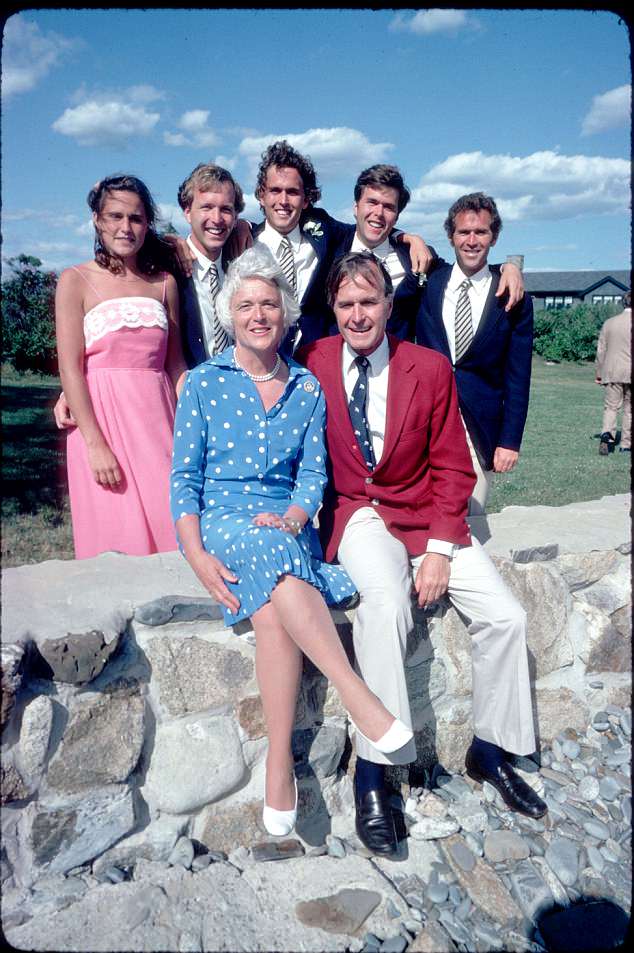 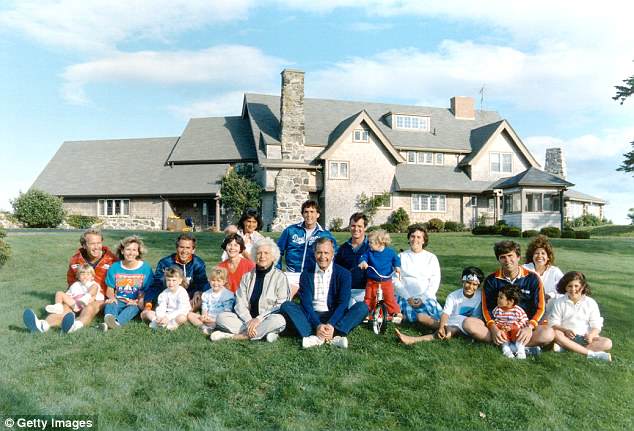 Barbara became increasingly active in cancer research throughout her life, devoting time with the Leukemia Society of America.

She spoke at St. Jude’s Hospital that opened a decade after her daughter’s passing.

‘What on earth could be better than a hospital that saves children’s lives,’ she said during her visit.

She continued in her quest to help children with cancer. The Barbara Bush Children’s Hospital in her second home of Maine is a tribute to her  work. ‘Long after I am gone,’ she said, ‘this hospital will be there with my name.’

In an interview with Barbara Walters in 1994, the former First Lady was asked if she ever got over her daughter’s passing.

‘No,’ she responded, adding ‘And that’s okay too, but its true she is a happy part of our life now.’

During her later interview with Hager, in 2012, she said Robin had been on her and George’s minds more than usual.

‘George and I do talk about it, maybe more recently in the last two or three years than before. I think we are getting older.’ 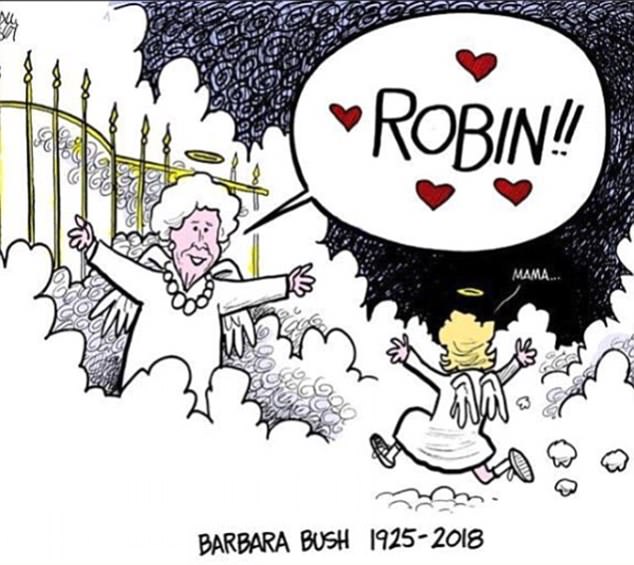 An image from Hager’s Instagram on Tuesday, she captioned it that someone has sent this to her

‘Robin to me is a joy. She’s like an angel to me, and she’s not a sadness or a sorrow.’

‘She is still with us. We need her, and yet we have her. We can’t touch her, and yet we can feel her. I hope she will stay in our house for a very very long time,’ the family matriarch read from a piece of paper during her interview with her granddaughter.

During the touching interview with Hager, Barbara said that she had told George when he dies, Robin will be the first one he sees.

After the George H.W. Bush Library was established in College Station, Texas, the family had Robin’s body moved to a small, gated burial plot on the grounds.

Saturday after Barbara’s funeral at St. Martin’s Episcopal Church in Houston, she will join her daughter there.