Barbara Dickson can take a joke. Call her Barbara ‘Dickinson’ (her sons do), mention the big hair in the Eighties (impossible not to), break into a dodgy rendition of I Know Him So Well (guilty as charged) – she’ll laugh it all off with good grace. Just don’t describe her as a celebrity.

‘I call that a term of abuse,’ says the Scottish singer over morning coffee in an Edinburgh hotel. Really? ‘Of course! Forty years ago, to be called a celebrity wasn’t particularly insulting. But to be called a celebrity now is to be a person who is famous for doing nothing. I don’t like that, because even in my very modest way of sticking up for myself, I think I have a purpose. I’m around because I have an ability to sing and play instruments and to interpret music. That’s really what I do best of all.’

You can’t argue with that. Although Dickson, 70, remains best known for that blockbusting duet with Elaine Paige, a No 1 for four weeks in 1985, her 50-year career has been a lesson in diversity. She made her name in the Sixties Scottish folk scene, playing with pals Billy Connolly and Gerry Rafferty.

Barbara Dickson made her name in the Sixties Scottish folk scene, playing with pals Billy Connolly and Gerry Rafferty

‘It was fantastically wild,’ she says. ‘We were walking about in our bare feet, flower power, lots of music and parties. It’s all slightly vague, but massive groups of people would gather wherever they could and sit and sing and drink.’

Plucked from the clubs by folk-loving playwright Willy Russell, who cast her in John, Paul, George, Ringo… And Bert at Liverpool’s Everyman Theatre in 1974, Dickson broke through to the pop mainstream in 1976 with Answer Me. She has since sold 10 million records, her hits including Another Suitcase In Another Hall, January, February and Caravans. At the same time, she forged a parallel career as an actress, winning Olivier awards for her performances as Viv Nicholson in Spend, Spend, Spend and Mrs Johnson in Blood Brothers. She also appeared in ITV prison drama Band Of Gold.

Not bad for an ‘old folkie’ raised in a Dunfermline council house, though Dickson tends to downplay her achievements. With her acting, she claims, ‘I’ve been very lucky. I don’t think I’d have won an award for appearing in a Noël Coward play or doing Shakespeare. It’s just with those characters, I could really draw on my own working-class experience.’ Dickson’s father worked in Rosyth dockyard; her mum was from a tough area of Liverpool. ‘I picked up the script and thought, “Yeah, I know these people, I can do something with this.”’

On today’s evidence, Dickson couldn’t be happier. Dressed elegantly in autumnal colours – ‘I don’t wear anything skimpy, I think that would be very unseemly’ – she looks terrific. She’s excited about her new record, Through Line, featuring reinterpretations of her back catalogue performed with the Carducci String Quartet, while her upcoming British tour will mark 42 years on the road as a headlining artist.

‘I never wanted to be a pop star and have hit records,’ she says. ‘It’s never been important to me. I was on Top Of The Pops loads of times, but I’m such a snob I would rather have been on The Old Grey Whistle Test – and I never was!’

All of which explains a certain ambivalence concerning her biggest hit. Written for the musical Chess by ABBA’s Benny Andersson and Björn Ulvaeus, with words by Tim Rice, Dickson doesn’t perform I Know Him So Well any more. She doesn’t really need to: few karaoke evenings escape a spirited, off-key rendition of the gold-plated power ballad.

‘More people know the song than know me, because it has become a karaoke song,’ she says. ‘It was a milestone in my career, but I don’t particularly want to sing it now. I don’t regret doing it, but it’s history. The video has come back to bite me a million times. They still play it in when I do TV interviews. I think, please don’t! I’m sure Elaine gets the same thing. They want to talk about the hair and the shoulder pads.’ It’s hard to ignore them, I say. ‘Well, it was of its time, the mid-Eighties. Everything was shiny. Clothes were shiny, hair was shiny, lips were shiny, nails were shiny. It’s like watching old Duran Duran videos – we look like female versions of them.’ She shrugs. ‘It is what it is. History.’

The song turned Dickson from a star into a superstar. The ramifications made her a ‘control freak. I was a complete thorn in the flesh to my manager, because I never wanted to do the things they wanted me to do, like play Sun City in South Africa. I said, a) I’m not a cabaret artist, and b) I’m not going there, because it is iniquitous what’s going on [with apartheid]. People said, “Think of the money.” I said, “I’m not going to bend over for the enemy. I will not do that.”’

As a ‘serious person’, she found the spotlight intrusive. Her refusal to discuss her private life even led to nudge-nudge stories that she was gay.

‘Everybody suggested obliquely that I must be a lesbian, because I didn’t have any boyfriends,’ she says. ‘Of course, I had enough boyfriends, I just wasn’t going to talk about them.’ Even when she married Oliver Cookson in 1985, a TV director 11 years her junior, privacy remained paramount.

‘Nobody knew, we just got married. I never wanted to talk about my private life. I could never understand why people would.’

She met Cookson in 1982 on the set of Blood Brothers. ‘I didn’t think there was remotely a chance of us getting together,’ she says. ‘It was quite a long courtship, because he was my friend to begin with. I thought, there’s no future in this. Then I realised he was much more mature than his years suggested. I wasn’t desperate to get married by any means, I’d given up.’ Why? ‘People saw me in a certain way. There was an elephant in the room, which was that I was a famous pop star.’

Thirty-three years later, she and Oliver have three adult sons, all of them involved with music. ‘They make fun of me,’ she laughs. ‘They get my name wrong and say, “Barbara Dickinson, big in the Eighties!”’

Behind the joke lay an uncomfortable truth. Dickson became so successful in the Eighties that by the decade’s end she had grown tired of chasing hits. ‘I didn’t want to steam on into middle age being a pop musician. I thought there was something vaguely undignified about that.’

She gradually downscaled. Parting from her long-term manager – ‘I think he was as relieved as I was’ – she took control of her own business affairs. She relocated to Edinburgh’s New Town after living in London and Lincolnshire most of her adult life, and returned to her first love, traditional music. Since the mid-Nineties, she has released a stream of acclaimed folk-orientated albums and continues to tour every year.

Taking control has finally given her a profile she’s comfortable with. ‘I’m quite a quiet, serious person. I’m not the sort of woman who could drink pink prosecco and go in a limousine to see Mamma Mia! I would be hugely embarrassed by that. I would feel like a man in drag!’

It’s fair to assume, then, she’s not a fan of Instagram, micro-blogging and social-media over-sharing? ‘It’s just awful,’ she cries. ‘Everybody does everything in public. I can’t understand why celebrities’ – she sighs disdainfully – ‘just go on and on about things. Shut up! It’s not interesting. Who cares about these people?’ 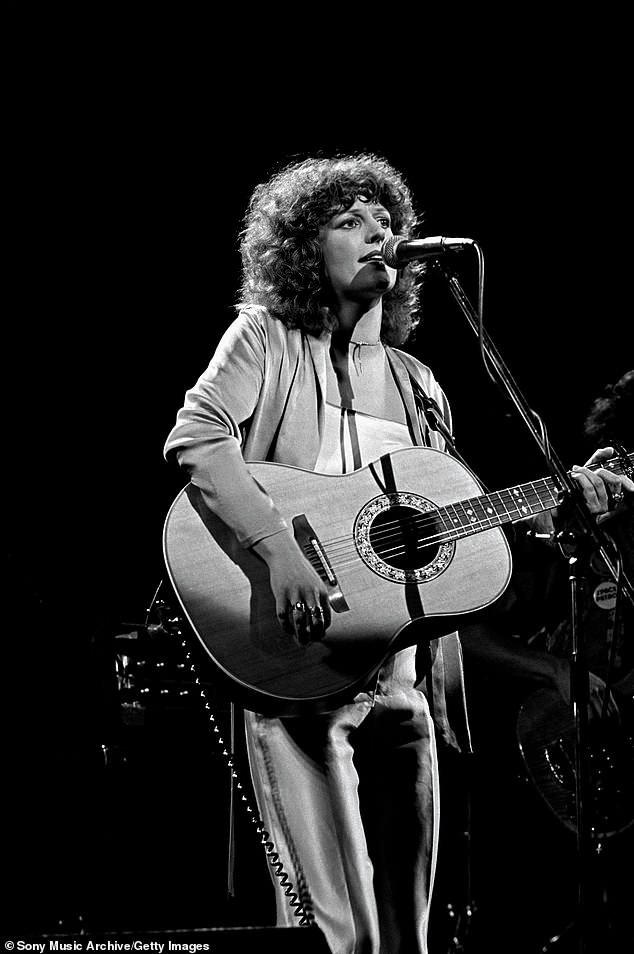 Performing in 1979. Dickson became so successful in the Eighties that by the decade’s end she had grown tired of chasing hits

She does tweet, though. ‘Yes, but most of my tweets are about the garden. I take pictures of my Chilean lantern tree, or I might comment about things I didn’t agree with.’ Such as cosmetic surgery. Dickson is ‘very, very, very opposed to radical things being done to people. Nowadays it’s all facelifts and getting your teeth done. That’s rubbish. It devalues the wisdom and experience of the elders, it betrays the sisterhood. I’ll have nothing to do with it. I’d rather stand up with a very old wrinkly face beside a whole pile of my contemporaries, who don’t have a wrinkle and think they look 25, but don’t. They’re just old and scary! I don’t try to pretend that I’m anything other than the age that I am. You need to be happy in your own skin.’

Will she ever step away from the pop world? ‘If I’m c*** I’m going to stop, and I’ll know before the audience. I won’t be being helped on with my Zimmer frame, wobbling around. But for now, I’ve still got something to say.’ She smiles. ‘You know, I never used to have much fun, I took it all too seriously. Now we have tons of fun.’