Lionel Messi played his 700th game for Barcelona, and did what he had done in most of the previous 699 – he won the game for his team, scoring one goal and setting up the other two.

Jadon Sancho came on as a second half substitute to score a spectacular consolation for Borussia Dortmund. He had a shot pushed on to the bar too but it was Messi’s show.

First he set-up Luis Suarez with the opener – it was his 236th assist in those 700 games.

He then scored from Luis Suarez’ pass. It was his 613th goal in those 700 games. He later gifted Antoine Griezmann the third and shaved the crossbar with a free-kick.

Barcelona were not brilliant in the first half – there were four misplaced passes from them inside the first minute, but a little of Messi’s and Suarez’s insatiable partnership is too much for most teams.

The opener came from a clearance that ran to Messi who slipped it through for Suarez to score.

For the second Mats Hummels played the ball straight out to Ivan Rakitic who played it to Messi.

He played the ball up to Suarez who had made a clever diagonal run, dragging a defender with him, and leaving a wide open space that Messi ran into before shooting past Roman Burki.

Messi’s 700th game was also marked with a card from the referee – yellow for diving in the area according to Clement Turpin, making him as popular as a traffic warden putting a ticket on the bride’s wedding car. Messi’s party carried on just the same. 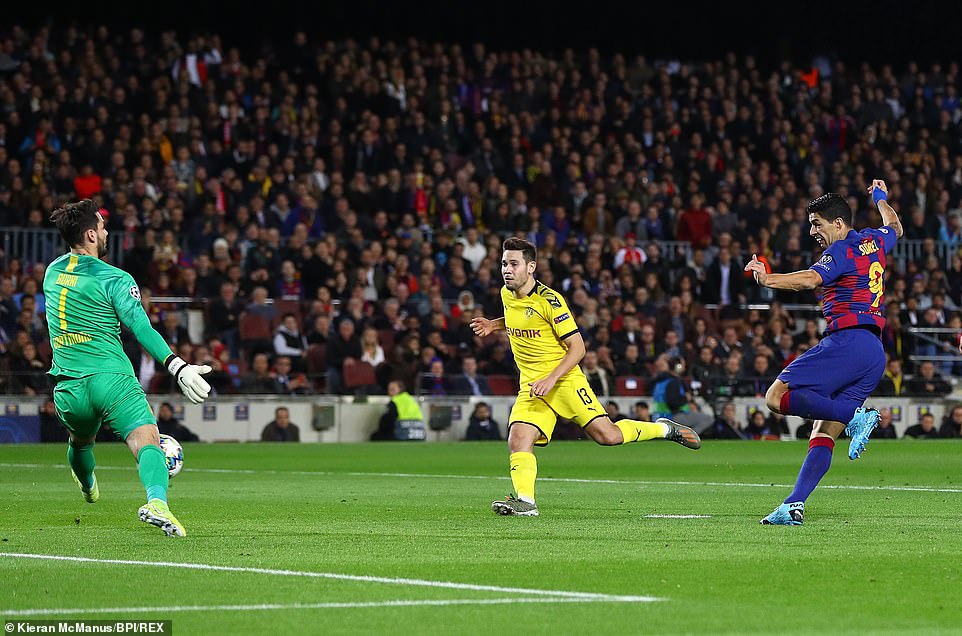 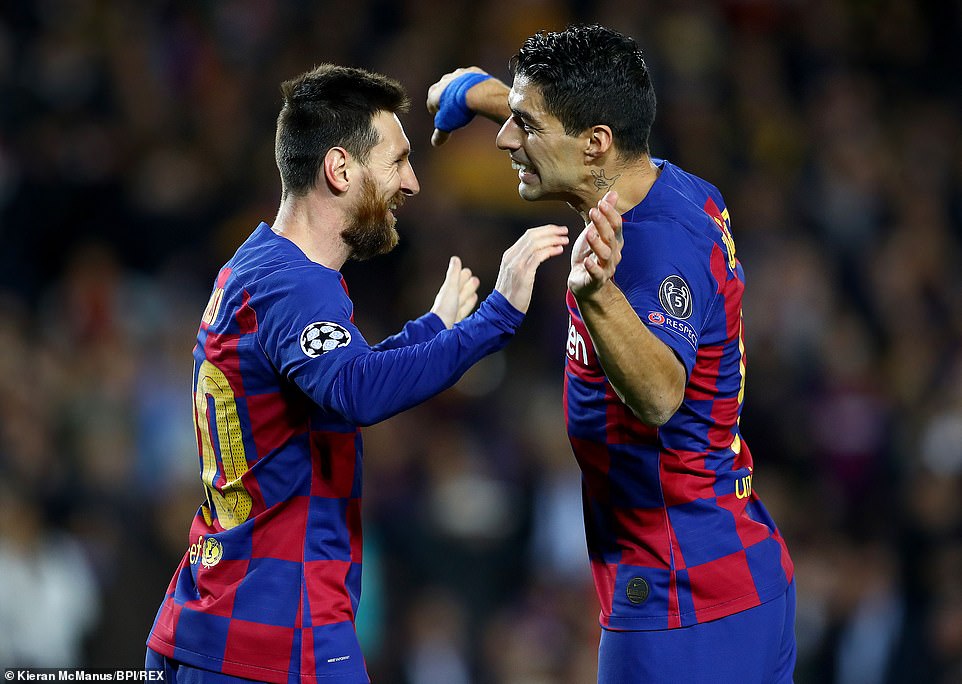 Messi played a perfectly-weighted ball into the path of Suarez, and he fired a right-footed effort through the legs of Burki

Griezmann had come on for Ousmane Dembele on 26 minutes after the former Dortmund forward went off with a hamstring problem. And Messi was a friend in need playing him in brilliantly with a pass behind Lukasz Pisz. Griezmann really needed the goal.

Pisz had just been beaten in the air by Messi who climbed above the defender to head narrowly wide.

His pass was gratefully received by Griezmann who buried his shot in Burki’s far corner. Almost to a man Barcelona’s players congratulated Greizmann. Messi seemed to celebrate the goal more than his own. He was in generous mood now and tried to set up Rakitic. 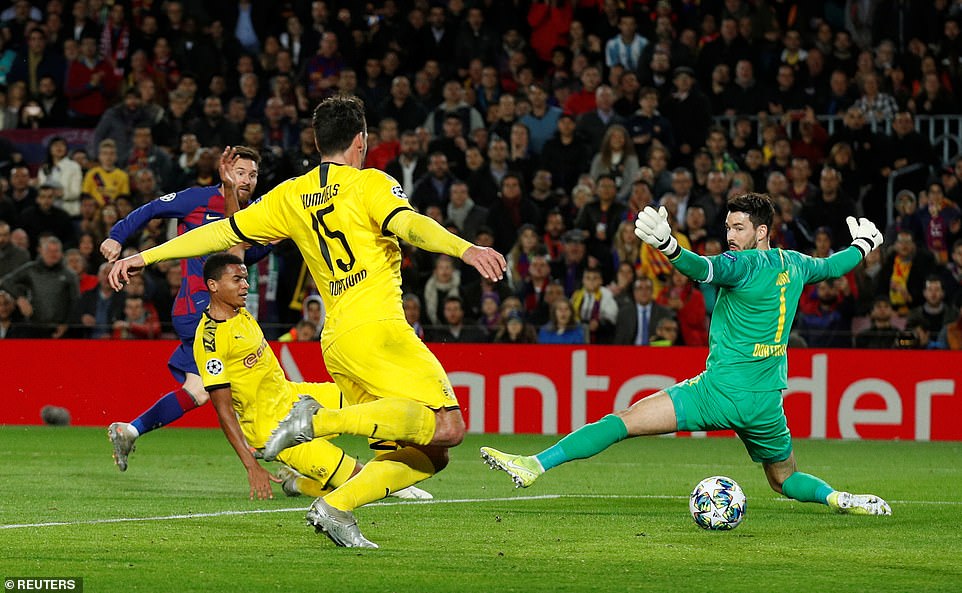 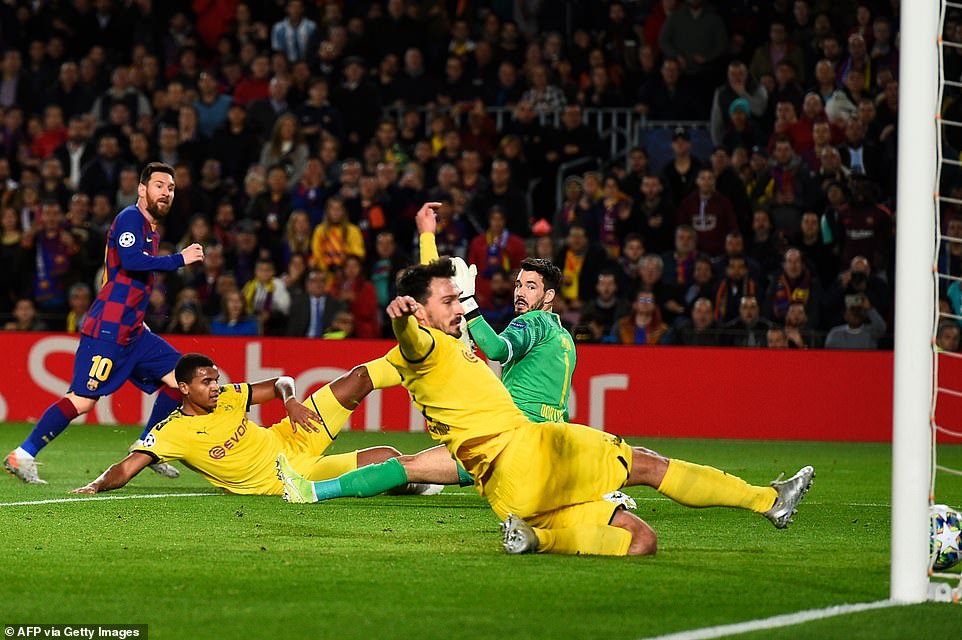 Luis Suarez played a no-look ball through to Messi on his left, who takes a touch before firing low into the corner of the net 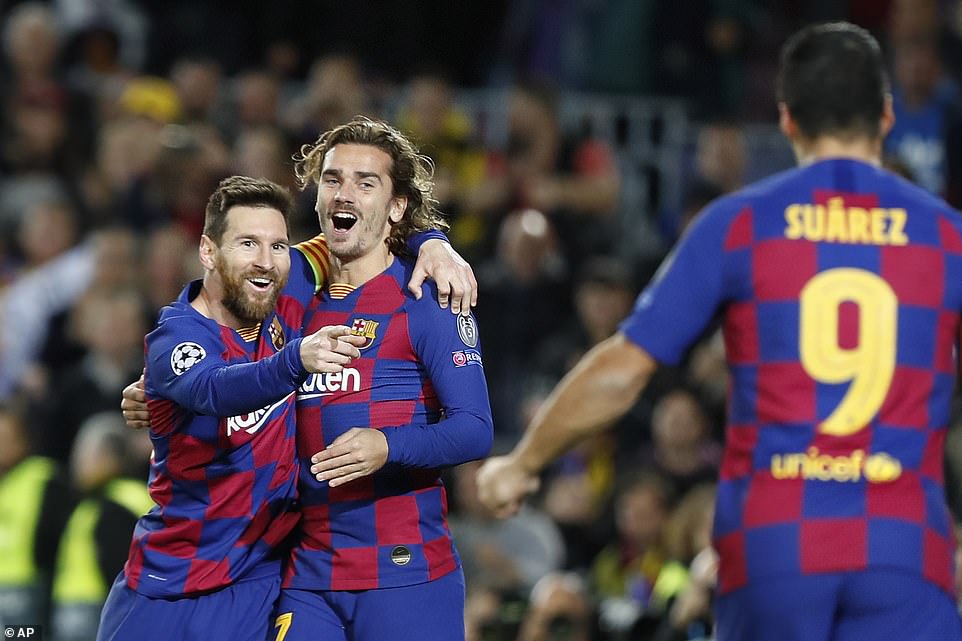 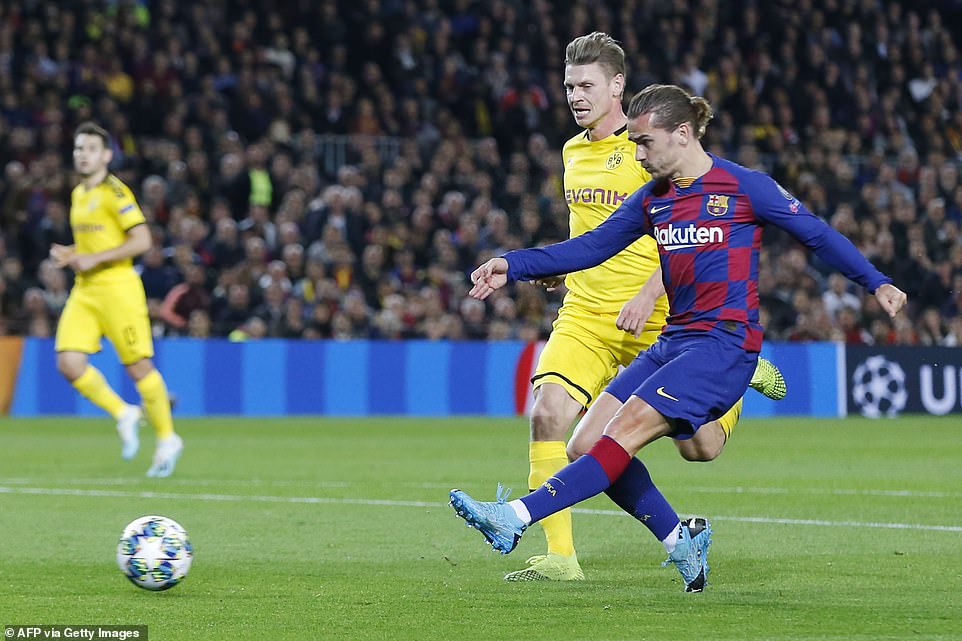 Dortmund had brought Sancho on at half-time to add some spark to Lucien Favre’s side – more sitting than pressing these days – and he had his moment on 77 minutes collecting a pass that had ran slightly behind him before sending an unstoppable shot past Marc-Andre ter Stegen.

It is not lost on Barcelona that they bought Dembele for €120m from Dortmund who then went out and signed Sancho for a tenth of that fee. They would swap the pair now.

Sancho then almost scored his second, denied by Ter Stegen who tipped the shot on to his bar. 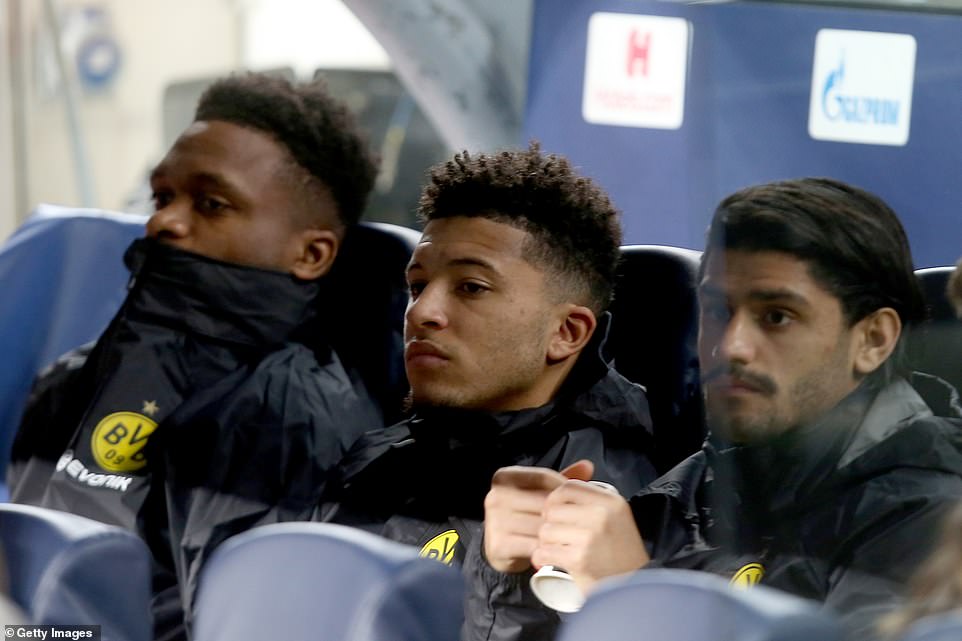 Sancho’s future in the Champions League now looks in doubt with Inter climbing above Dortmund. Barcelona go through as group winners.

Messi will need more help from his friends to lift another European Cup. Frenkie De Jong was outstanding in midfield and Barcelona will be pleased to have Suarez, Griezmann and the Argentine scoring in the same game at the Camp Nou for the first time.

This was a potential slip-up. It turned into just another landmark – 700 and counting. 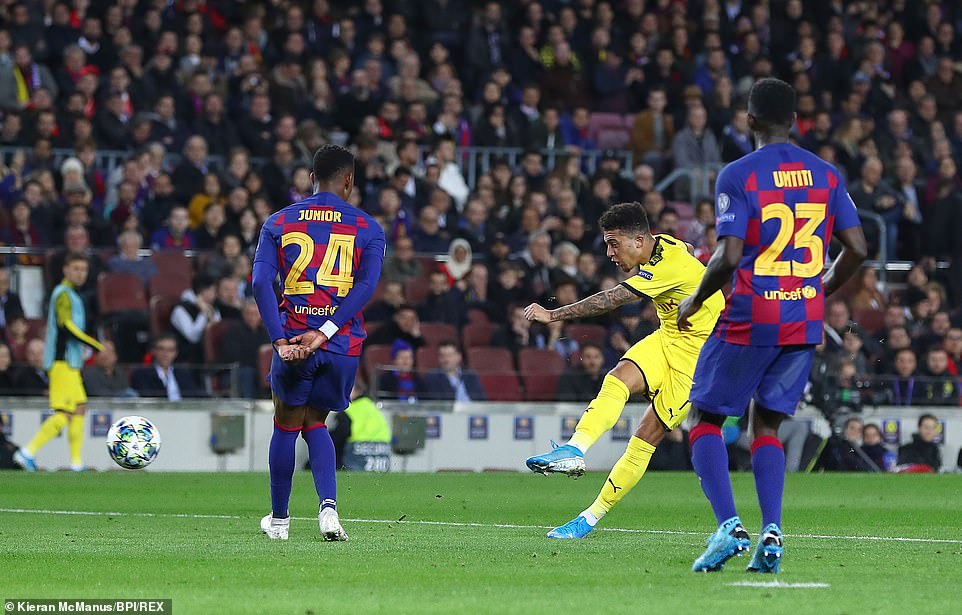 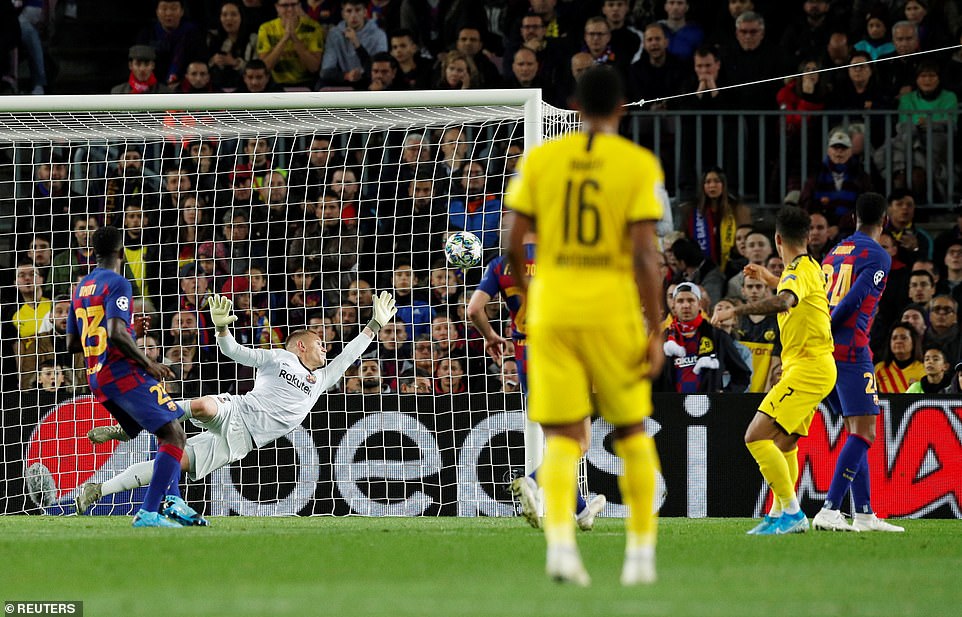