Barcelona boss Xavi insists Ousmane Dembele has been a ‘true professional and role model’ despite turning down new contract offer amid interest from PSG, Chelsea, Manchester United and Tottenham


Barcelona coach Xavi has commended the attitude of Ousmane Dembele since the club tried to offload the winger in January deadline day moves.

The 24-year-old was pushed towards the exit by Barcelona last month after he refused their offer of a new contract leaving him in the final five months of his deal and free to talk to foreign clubs.

Barca tried and failed to reach agreement with Paris St Germain while interest from Chelsea and Tottenham failed to develop into formal offers and Manchester United said they wanted to wait and assess options in the summer. 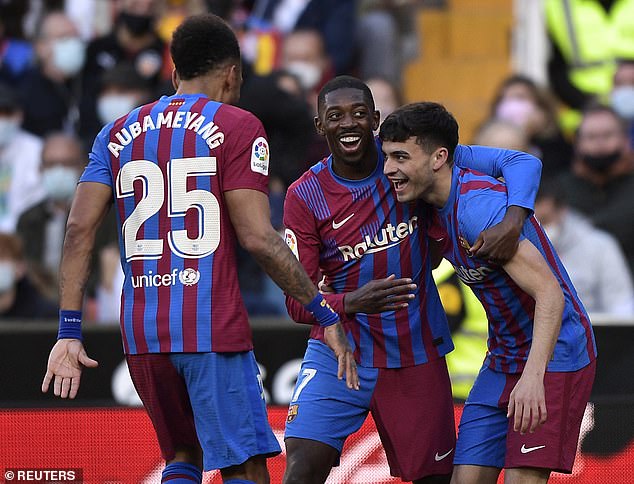 The Catalan giants tried to offload the winger (pictured, centre) with interest from the likes of PSG, Manchester United and Chelsea

Dembele was initially ostracised from the first team set up then faced a backlash from supporters who booed him on his return for turning down the club’s contract offer.

Yet Xavi has jumped to Dembele’s defence being quick to defuse rumours of the Frenchman being an enfant terrible and noting the fact he has been a key figure in helping new signing Pierre Emerick Aubameyang settle at the Camp Nou.

While Chelsea and Paris St Germain, particularly, remain interested in a free transfer this summer, Xavi has refused to rule out the possibility of a Barcelona U-turn on Dembele’s future. 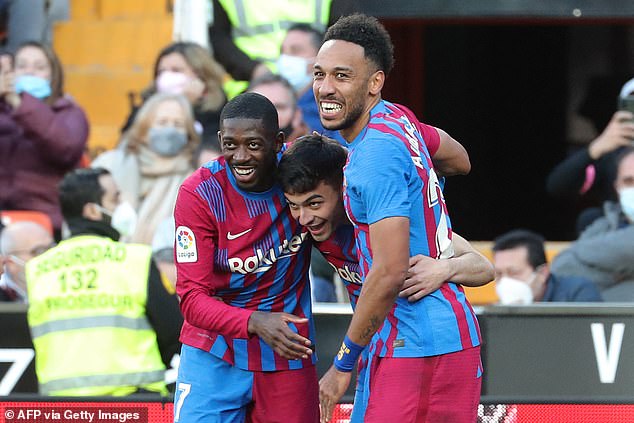 ‘Well, Ousmane’s contract is up in June and it’s a matter that’s between the club and him,’ Xavi said.

‘I see him as being happy. He’s acting like a true professional. I’m very happy with him, even when he knew he wasn’t in the squad, he’s been a model professional.

‘I haven’t had the slightest problem with Ousmane.

‘I can tell you now that it’s the complete opposite, he’s looking after himself, is professional, has been training well, and is positive in and around the group.

‘That’s why we, I want to stress that it’s not just me but the club too, have decided that he’s able to play with the team. 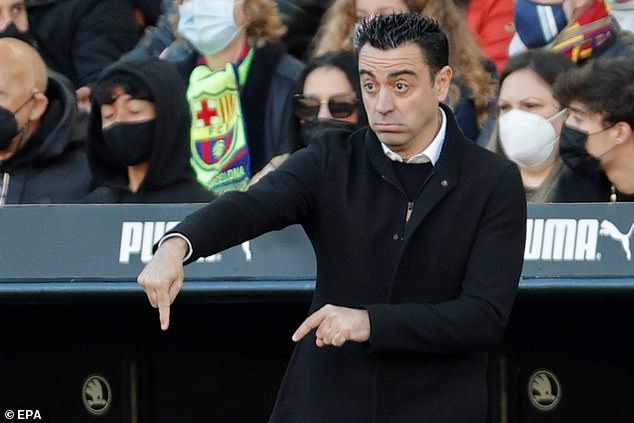 ‘Had he been a bad professional, we may have decided on something else, but he’s been a true professional and a role model in terms of the way he’s carried himself within the group and that’s ultimately what matters.

‘We’ll have to see what happens between now and the end of the season… It’s down to the club and it’s down to him. He’s an important player and one I like.’

Dembele started at the weekend in Barcelona’s 4-1 defeat of Valencia after making two previous appearances off the bench and will be hoping to make a greater impact again tonight.