The Catalan giants surrendered a 3-0 first-leg lead, losing 4-0 at Anfield in the semi-finals – having suffered a similar comeback loss against Roma in last season’s quarter-finals – to end their bid for another treble this season.

Valverde’s side clinched La Liga in comfortable fashion, finishing 11 points clear of second-placed Atletico Madrid and will bid to seal the a double when they face Valencia in the Copa del Rey final on Saturday.

Speaking at a club conference, Bartomeu admitted the Champions League defeat was a disappointment but insists he has full faith in Valverde.

‘I want to value someone who discreetly and intelligently is helping our team, I’m talking about Ernesto Valverde, who we fully trust,’ Bartomeu said.

‘Winning La Liga has an extraordinary merit and you know better than anyone what it costs to win this league.

‘We had a lot of hope in winning the Champions League and the defeat at Anfield came after an excellent result at home and when the memory of Rome is still very present.

‘I want to make a unanimous call for us to focus on the cup final. You understand what a ninth double means for our history. When the season ends we can reflect to see what we can do to win everything again.’ 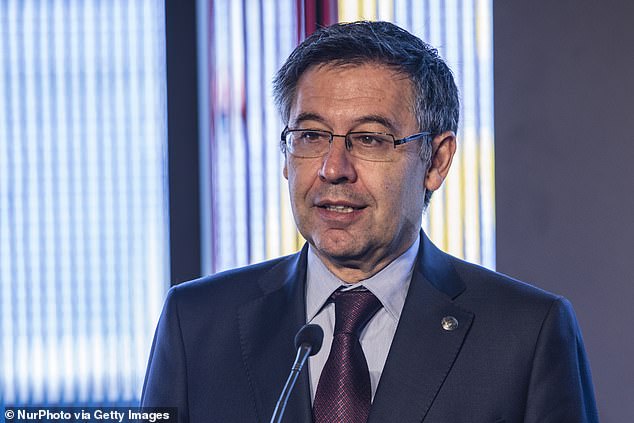 Bartomeu admitted the Champions League defeat against Liverpool was a disappointment

Barcelona have added to their squad for next season with the capture of Groningen youngster Ludovit Reis.

A statement on the Eredivisie’s side’s website said that 18-year-old Reis – the first goalscorer in the division born on or after January 1, 2000 – had signed a multi-year contract at the Nou Camp.

Managing director Hans Nijland said: ‘In 23 years I have been able to do business on behalf of FC Groningen with large clubs at home and abroad, but this transfer with one of the largest clubs in the world is a wonderful final agreement.’