Baroness Emma Nicholson has been axed as the vice-president of the Booker Prize after she was accused of bullying transgender model Munroe Bergdorf.

The Tory peer, whose late husband Sir Michael Caine helped establish the prize, had held the role since 2009.

Booker Prize announced the decision today and said it was scrapping all honorary roles across the organisation.

Referring to claims of transphobia against the Baroness, a spokesman said in a statement: ‘We, the Trustees of the Booker Prize Foundation, met today and wish to reiterate that the views expressed by Baroness Nicholson on transgender people are her own personal opinions.

‘The issues are complex, but our principles are clear. We deplore racism, homophobia and transphobia – and do not discriminate on any grounds.’

The Tory peer (pictured), whose late husband Sir Michael Caine helped establish the prize, had been honorary vice president since 2009

Bergdorf welcomed the foundation’s decision to do away with Baroness Nicholson’s role and said: ‘See what happens when we all stand up TOGETHER against bigotry!’ 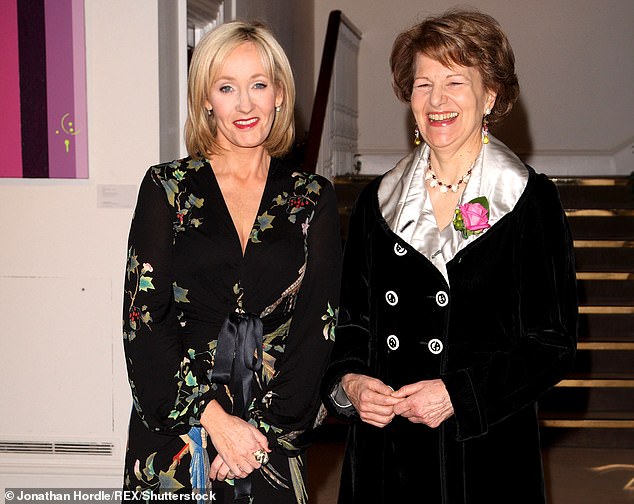 The 78-year-old (right, in 2007), who co-founded a charity with JK Rowling (left), denied allegations of homophobia, adding she would ‘very much regret any move to remove me’

The Tory peer has come under fire from LGBT activists for tweeting that she voted against the same-sex marriage bill in 2013 as ‘it would lead to degrading the status of women and of girls’.

The 78-year-old, who co-founded a charity with JK Rowling, denied homophobia, adding she would ‘very much regret’ any move to remove her from the Booker role.

She was also embroiled in a row with transgender activist Bergdorf, calling her a ‘weird creature’ on social media.

Reacting to the move this morning, Baroness Nicholson told MailOnline: ‘Booker is as Booker does.’

Bergdorf welcomed the decision and said on Twitter: ‘See what happens when we all stand up TOGETHER against bigotry!’

The outspoken advocate for social justice was thought to have been the subject of a tweet from the politician saying ‘weird creature’.

In another, now deleted tweet, Baroness Nicholson misgendered the model and said it was a typing error, according to PinkNews.

She said: ‘Musht be shome mishtake, my finger typed M. but the invisible editor forgot that I also use French.’

Bergdorf hit back on her Instagram account, claiming: ‘In addition to calling me ”a weird creature” and sharing transphobic memes featuring abuse that I received three years ago, reframed as if I said it myself.

‘She has also deliberately misgendered me and begun retweeting dangerous propaganda from anti-trans hate group Transgender Trend, who actively go into schools to disseminate anti-trans rhetoric.’

Baroness Nicholson did not deny misgendering the model, but said she was not aware what pronouns she uses and it was not clear on her Twitter account. 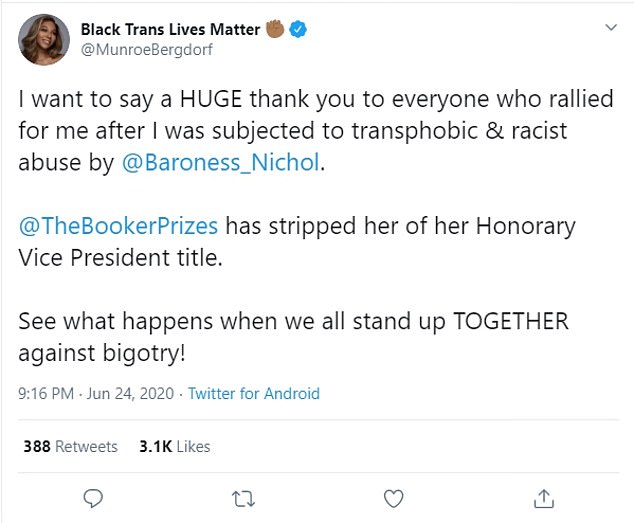 She told MailOnline this week: ‘This really cannot be the case because this person who I do not know does not detail on their Twitter profile their preferred pronouns.

The Booker Prize statement in full:

We, the Trustees of the Booker Prize Foundation, met today and wish to reiterate that the views expressed by Baroness Nicholson on transgender people are her own personal opinions.

The issues are complex, but our principles are clear. We deplore racism, homophobia and transphobia – and do not discriminate on any grounds.

Literature is open, plural and questioning. We believe every author’s work should be approached by readers in the same spirit. Integrity is central to both Booker Prizes, whose judging process is conducted at all times in keeping with these values.

Upon her retirement from the Board in 2009, Baroness Nicholson was made an honorary vice president, a role that gave her no say in the governance or operations of the Foundation or prizes. In recent days there has been some confusion about the nature of honorary titles used by the Foundation. Too many believe that these titles in some way symbolise the prizes. That is not the case.

We have today decided that these titles and roles should, with immediate effect, cease to exist. Those holding them have been informed and thanked for their longstanding interest.

‘There are two sexes and 112 genders so you cannot choose. It’s a bit of a red herring, if transgender people want to be called by a specific pronoun you have to make it clear to people.’

She said she was trying to write ‘M.’ but made an error.

She also admitted to calling the model a ‘wild creature’ but said it was a reference to Shakespeare’s Sonnet Number 1 that she been engaging with during lockdown.

She said: ‘It’s about a creature who is really wonderful and beautiful.’

The peer added the accusations of bullying are ‘just a load of rubbish’ and she and Bergdorf ‘have different views’ which they share online ‘but that’s politics.’

Bergdof posted screenshots of her followers reporting Baroness Nicholson to the Lord’s Commissioner for Standards and posted a link in her Instagram bio on how to make a complaint to Parliament.

A House of Lords spokesman told MailOnline this week: ‘Complaints made to the House of Lords Commissioner for Standards are first subjected to a preliminary assessment to decide whether they engage the Code of Conduct and therefore may require investigation.

‘Complaints about members of the House alleging bullying, harassment or sexual misconduct are only made public where a preliminary assessment requires an investigation and after any report is published.’

Prior to removing the two honorary positions, the Booker Prize had come under increasing pressure to take action against the peer.

Playwright Damian Barr tweeted: ‘As a gay writer I feel very concerned that a person who is actively and publicly propagating homophobic views holds a position of such power & prestige in your rightly esteemed organisation.’

Marlon James, who won the Booker Prize in 2015 for his novel A Brief History of Seven Killings, added on Facebook that she was a ‘hate monger’. 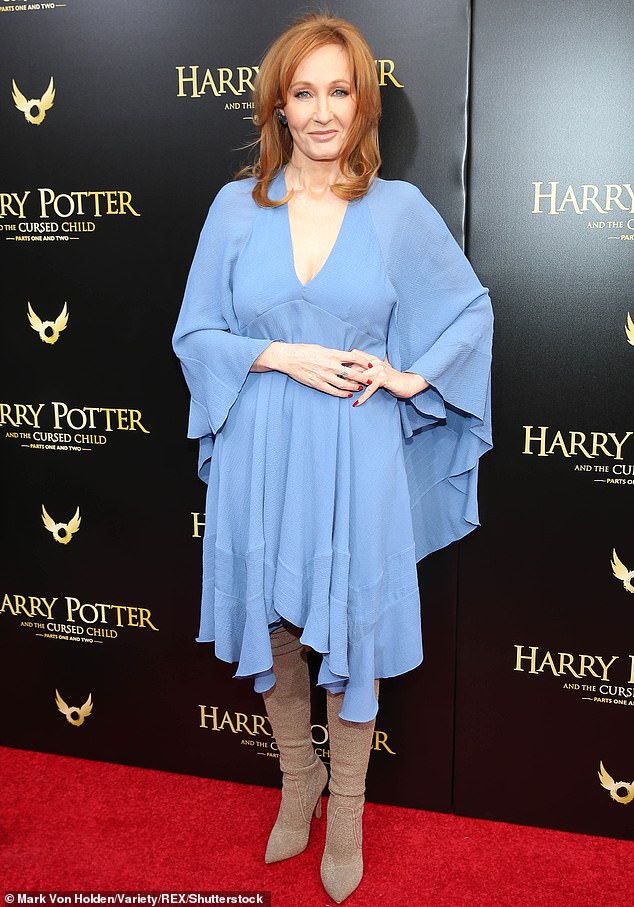 The peer has been not been involved with the charity, which is now called Lumos, since 2010.

Harry Potter author Rowling has also been mired in controversy for comments she made on social media and in an essay published online.

Four authors resigned from JK Rowling’s literary agency after accusing it of failing to issue a public statement in support of transgender rights and equality.

A fourth author is also understood to have quit but they wished to remain anonymous. 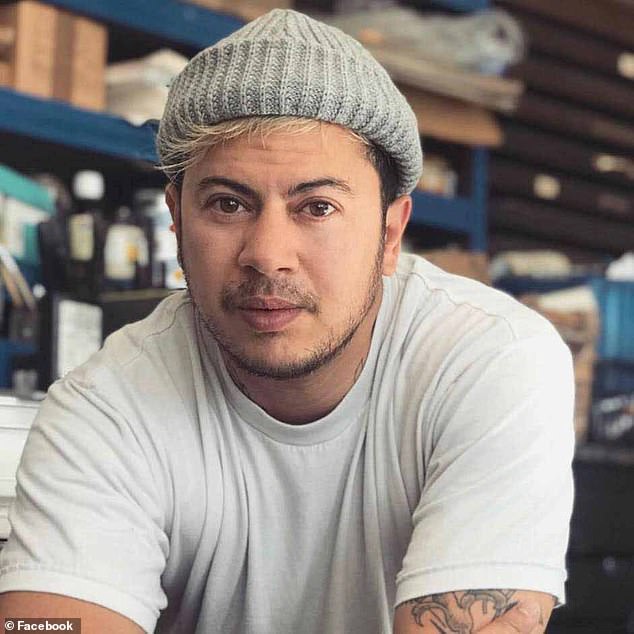 Rowling was criticised for comments she made on social media and wrote an essay, published on her personal website, expressing ‘deep concerns’ about transgender activism.

The statement, made by Fisher, Davies and Jónsdóttir, said: ‘This decision is not made lightly, and we are saddened and disappointed it has come to this. 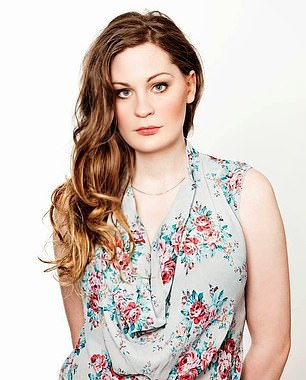 Jónsdóttir, also known as Owl Fisher and co-author of the Trans Teen Survival Guide, suggested the agency should conduct staff training with the group All About Trans

‘After our talks with them, we felt that they were unable to commit to any action that we thought was appropriate and meaningful.

‘Freedom of speech can only be upheld if the structural inequalities that hinder equal opportunities for underrepresented groups are challenged and changed.’

Jónsdóttir, also known as Owl Fisher and co-author of the Trans Teen Survival Guide, suggested the agency should conduct staff training with the group All About Trans.

But ‘these requests weren’t met positively by the management’, according to the Guardian.

The statement added: ‘As LGBTQIA writers ourselves we feel strongly about having an agency that supports our rights at all avenues, and does not endorse views that go against our values and principles.’

The three authors are marking their resignation by donating to Shakti Women’s Aid and have also asked others to donate.

Shakti Women’s Aid is a charity that is part of the Scottish Women’s Aid movement and supports BAME women who are experiencing or have experienced domestic abuse. 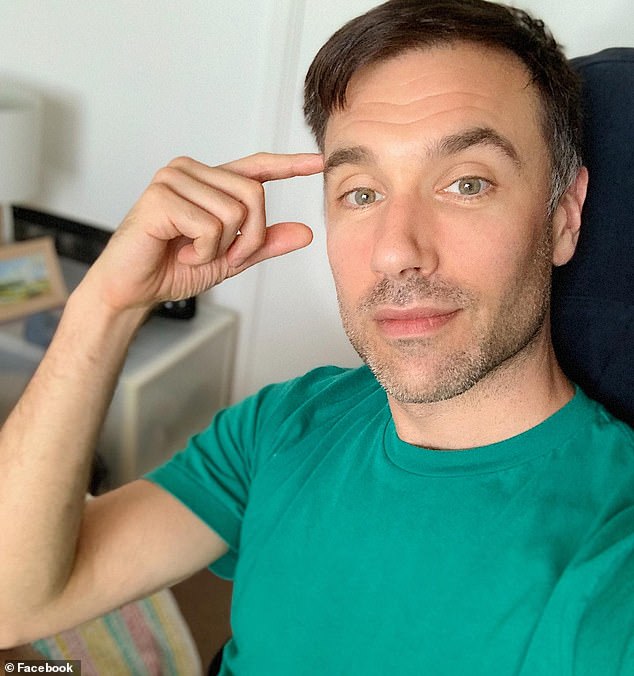 Fisher, Davies (pictured) and Jónsdóttir will mark their resignation with a donation to Shakti Women’s Aid

A spokesman for The Blair Partnership said: ‘We support the rights of all of our clients to express their thoughts and beliefs, and we believe in freedom of speech.

‘Publishing and the creative arts are dependent on these things. It is our duty, as an agency to support all of our clients in this fundamental freedom and we do not comment on their individual views.

‘We are disappointed by the decision that four clients have taken to part ways with the agency.

‘To reiterate, we believe in freedom of speech for all; these clients have decided to leave because we did not meet their demands to be re-educated to their point of view. We respect their right to pursue what they feel is the correct course of action.

‘We value all our authors’ voices and, as an agency, champion equality and inclusivity.

‘We remain committed to making the agency the most welcoming environment it can be for everyone.

‘The diversity of our clients’ voices is our strength and we take enormous pride from each and every one.’