Barrister breaks down in tears when asked about daughter

A controversial criminal lawyer cried when asked how he would feel if his daughter was raped and had to face the kind of robust cross-examination in court that he advocates.

Barrister John Desmond has defended hundreds of accused sexual predators and is renowned for his aggressive interrogation of witnesses appearing before a judge.

However, the veteran Melbourne lawyer was lost for words when asked by SBS presenter Jenny Brockie if he would want his daughter to go to court were she to be sexually assaulted.

‘I’ve wrestled with that question many times, Jenny. I don’t know the answer to it,’ he told the Insight program which aired on Tuesday night.

He then admitted he would prefer his daughter, in that hypothetical situation, to avoid proceeding with a criminal trial.

‘I hope I would support, if it was my daughter, in whatever decision she made, I would inform her to the way that the system operates but if it were her decision not to proceed I feel I wouldn’t encourage her,’ he said.

Asked if it was the adversarial court process that made him say that, the barrister became emotional.

He admitted he would prefer his daughter, in that hypothetical situation, to avoid proceeding with a criminal trial before becoming emotional 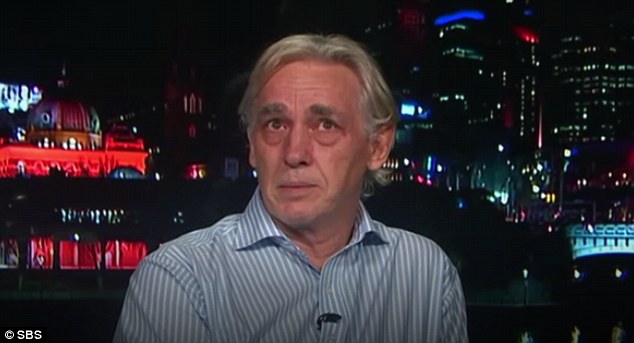 ‘I suppose it’s the role I play,’ he said, before rubbing his eyes and crying.

Deb, who was sexually assaulted as a child by her adopted brother, waited for three years to have a trial, after giving police a statement in 2013.

Deb, who was sexually assaulted by her adopted brother and faced an awful court ordeal, had moist eyes as Mr Desmond admitted he would advise his daughter to avoid court

She was sitting in the studio audience, with moist eyes, as Mr Desmond made his emotional admission.

Deb had told of being cross examined for three-and-a-half days and having a defence lawyer for the accused insinuate she was a liar 16 times.

‘I was just very traumatised,’ she said.

‘You’re re-living everything that happened to you and you’re being tested on it like an exam.’