Barron’s back! Trump’s youngest child spotted for first time since AUGUST as he heads to Mar-a-Lago

Barron Trump was spotted at the White House on Tuesday for the first time since August as he joined his parents as they boarded Marine One in route to Mar-a-Lago for Thanksgiving.

President Donald Trump’s youngest child was last seen in August, when he joined his parents for a flight back from Bedminster, New Jersey, to Washington D.C. as his summer break came to an end.

He and mom Melania Trump boarded Marine One Tuesday afternoon as his dad answered questions from the press. 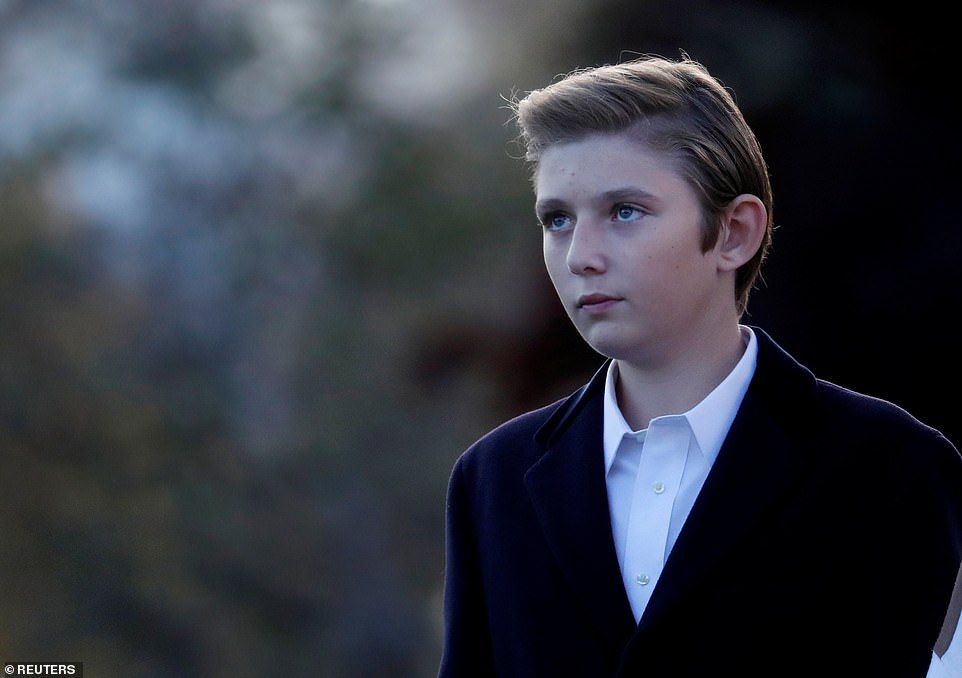 The 12-year-old attends a school in nearby Maryland 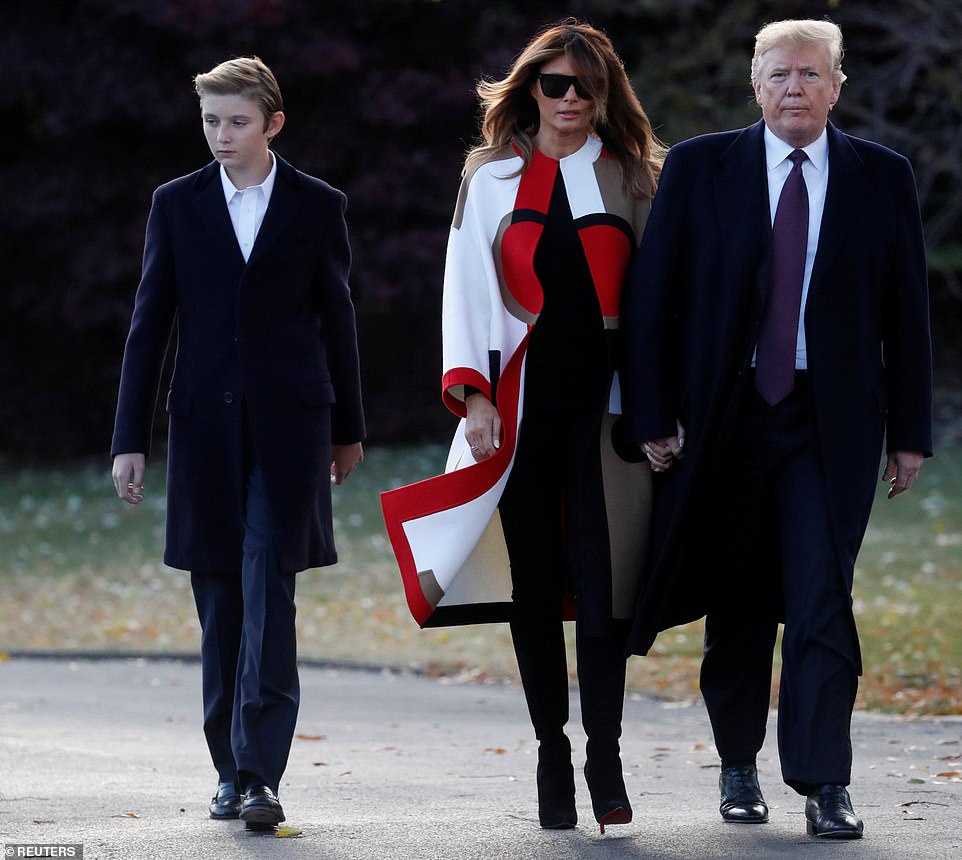 He walked beside his parents as they held hands 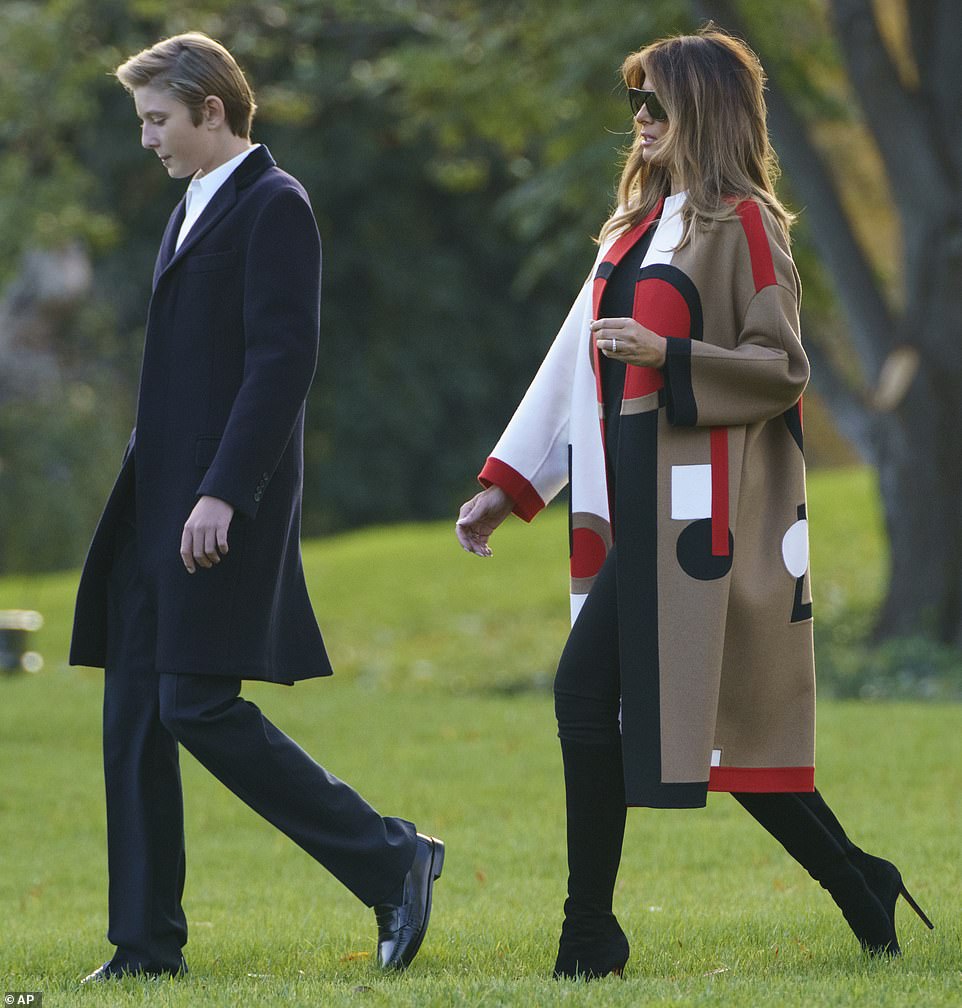 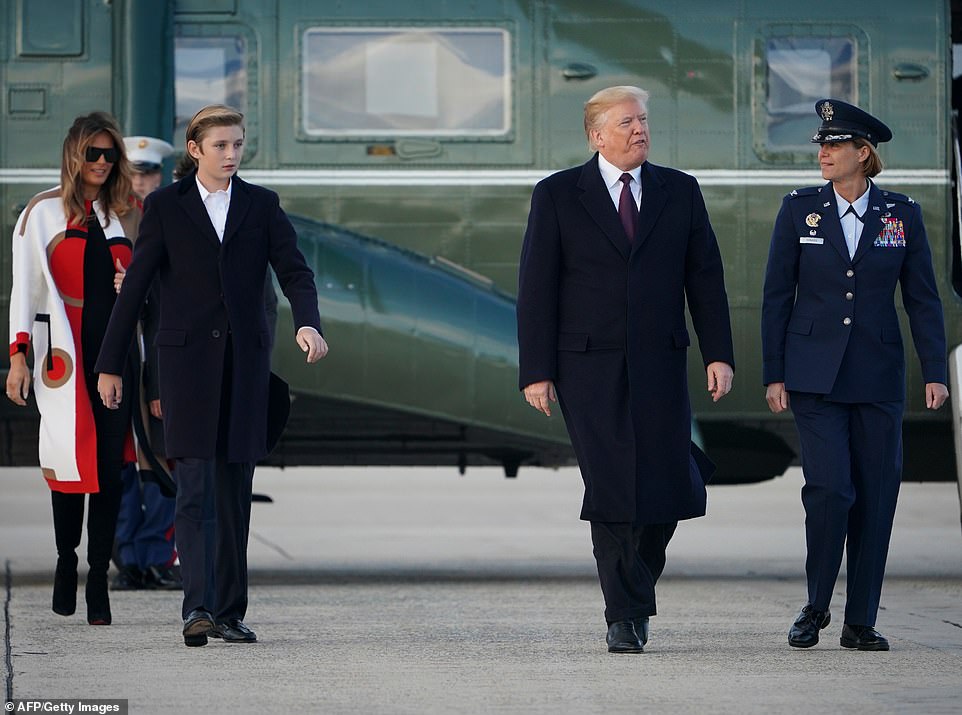 The first son is on Thanksgiving break from school 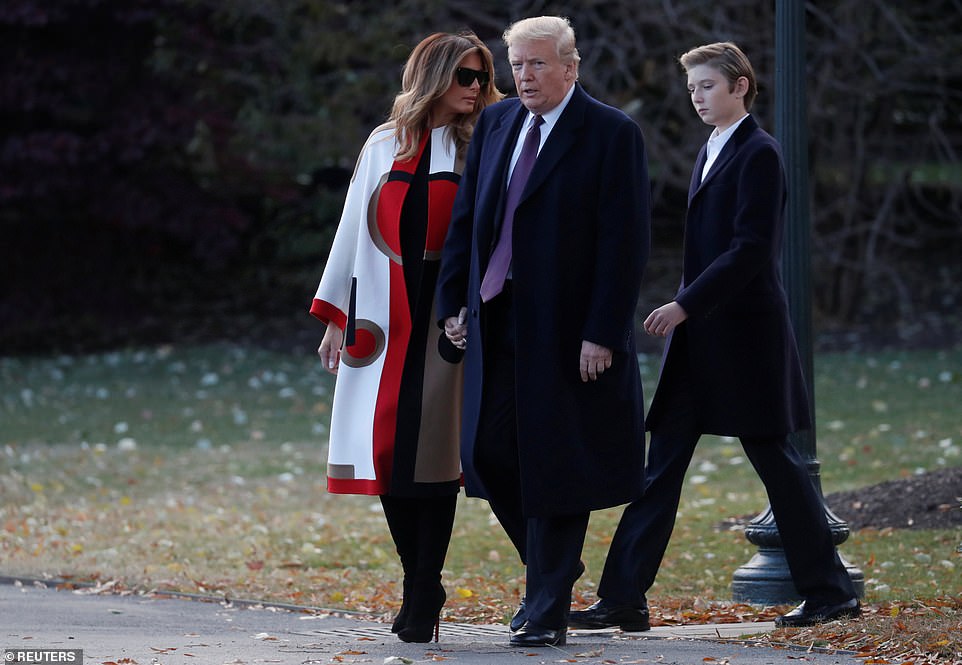 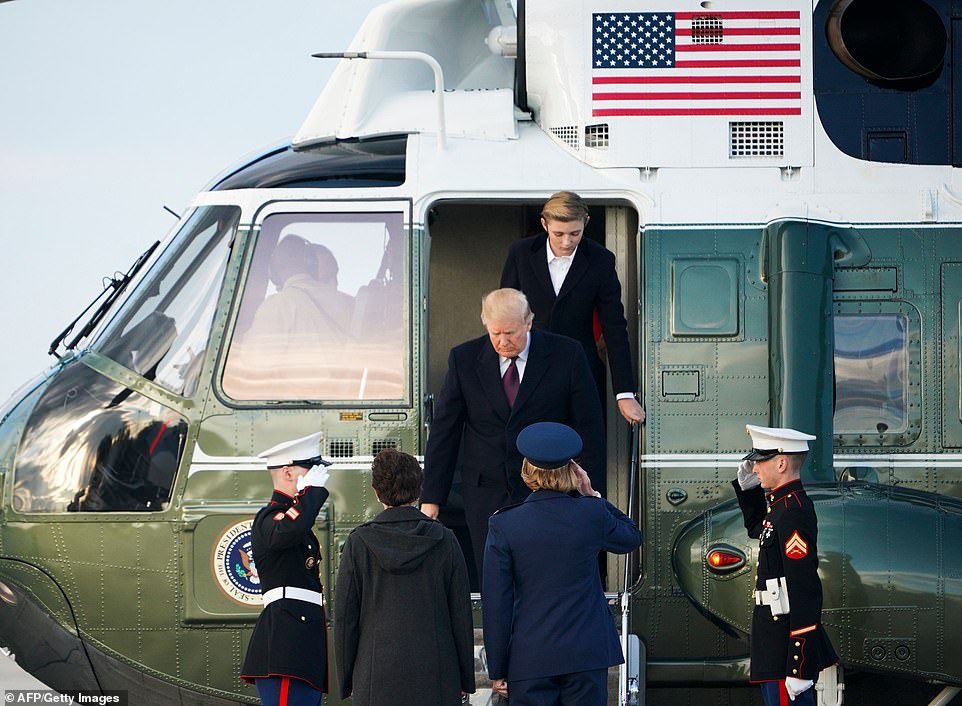 He was on Marine One with his parents 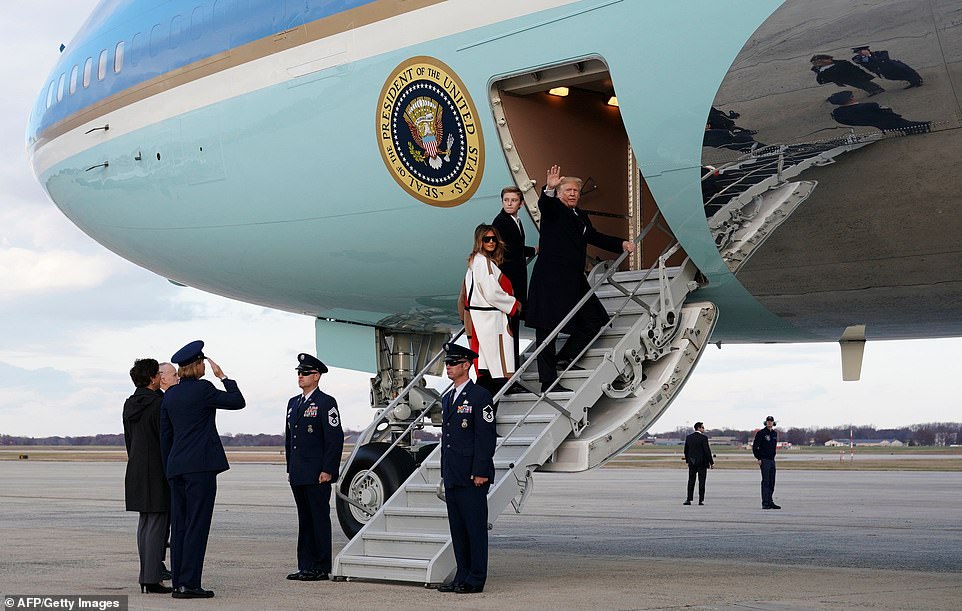 He boarded Air Force One with his parents, ahead of his sisters 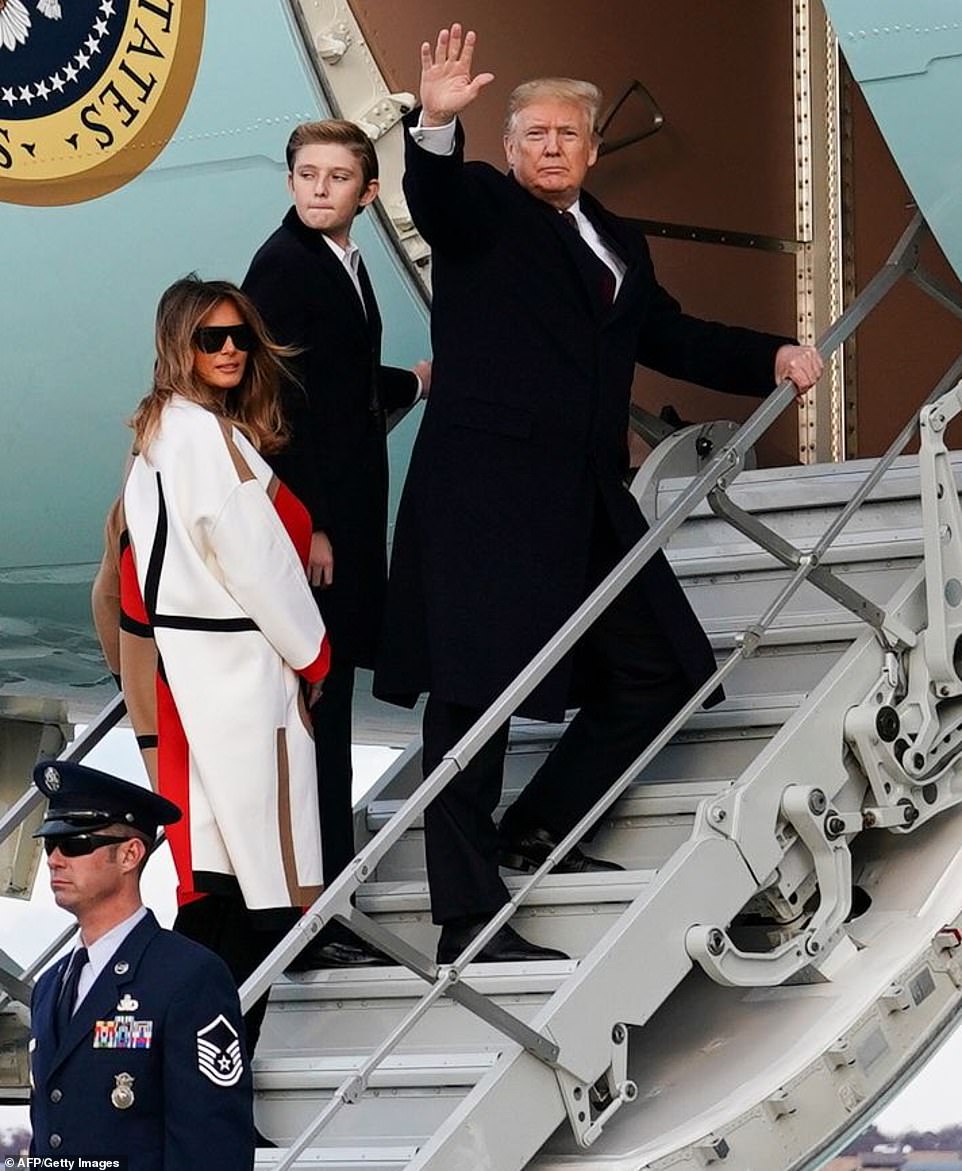 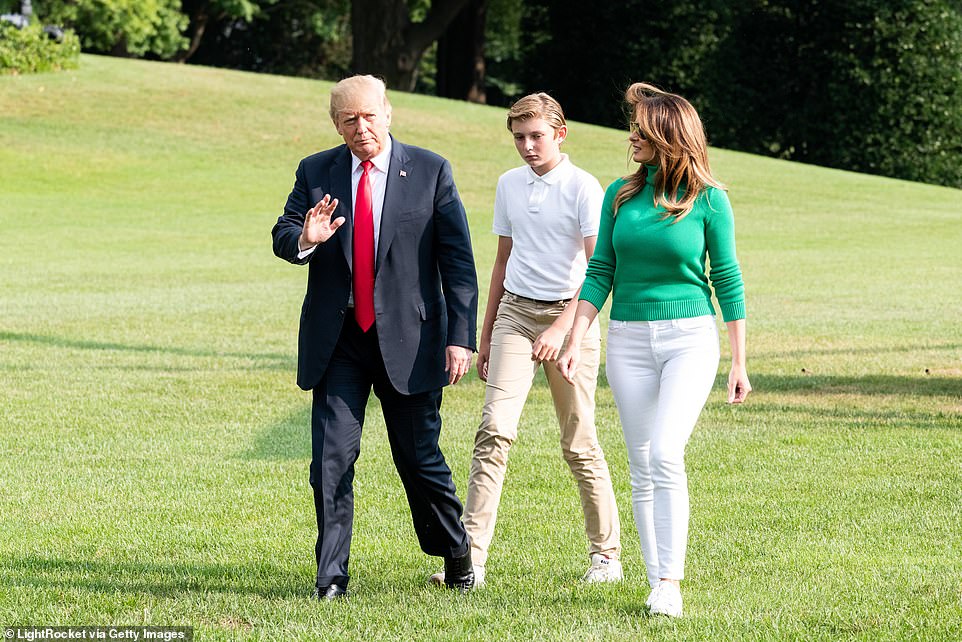 Barron Trump was last seen in August when he returned to the White House with his parents from Bedminister, New Jersey

The 12-year-old was wearing dark pants, a dark jacket and light dress shirt.

Barron Trump was no where to be seen earlier in the day when President Trump pardoned the Thanksgiving turkey.

He was also absent from Monday’s arrival of the White House Christmas tree.

He attended both ceremonies last year.

Melania Trump followed her son on to the presidential helicopter wearing the same  $9,400 Dior coat and black stiletto boats she wore to the turkey pardoning earlier in the day.

Barron attends St. Andrew’s Episcopal School in Potomac, Maryland, and is on his Thanksgiving break.

Unlike his older siblings, Barron avoids the spotlight and his parents’ public life. 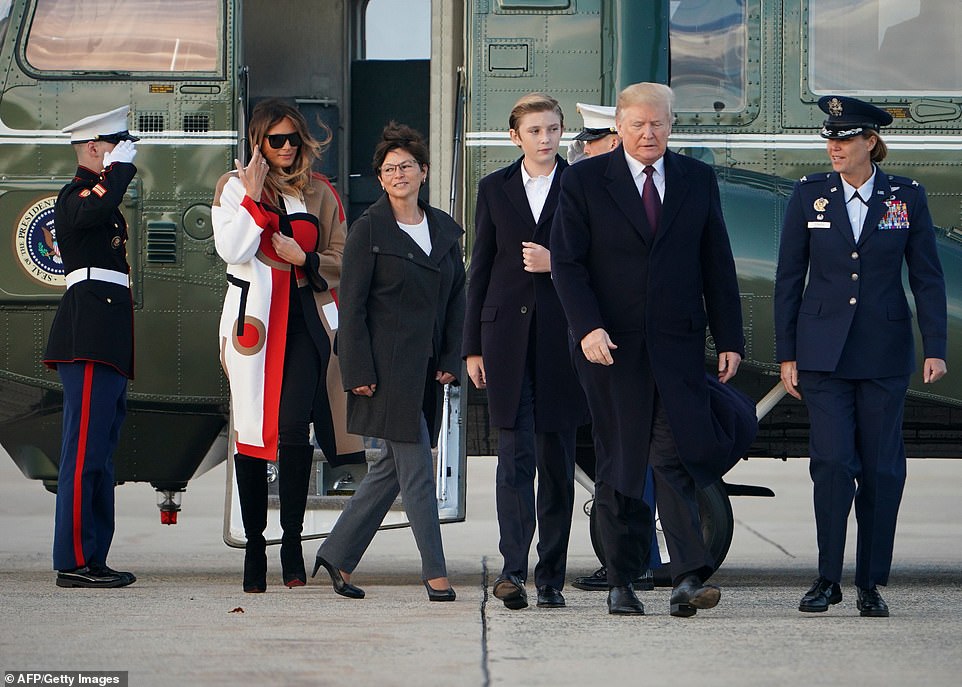 Barron will be his family in Mar-a-Lago for Thanksgiving 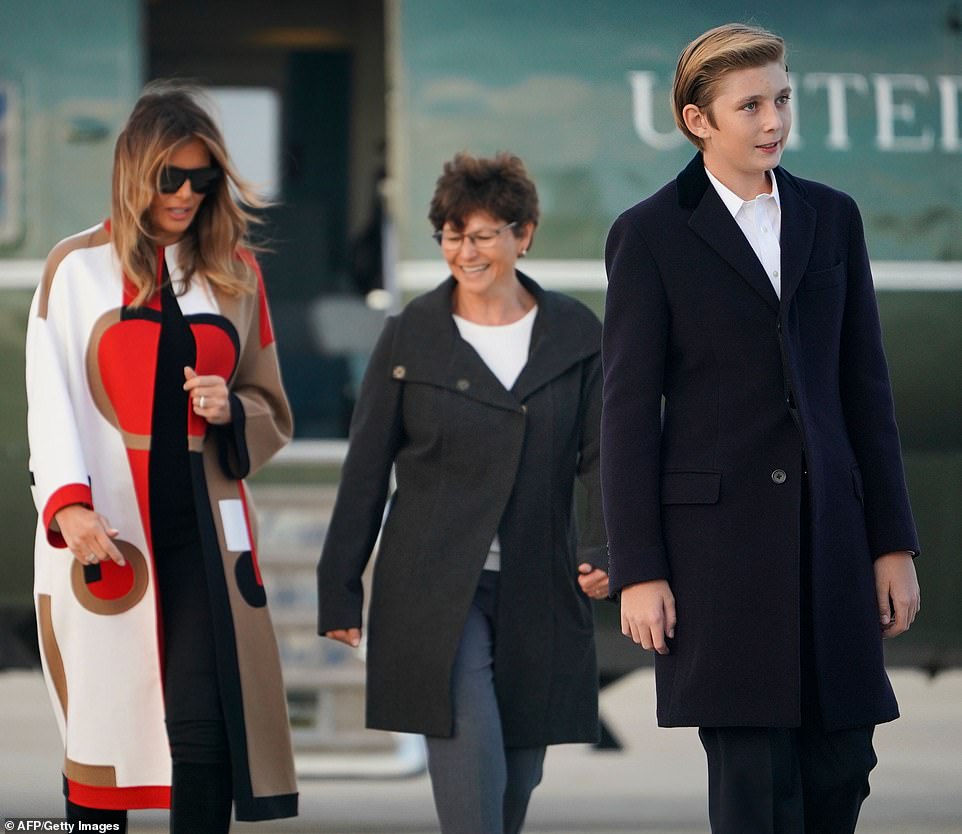 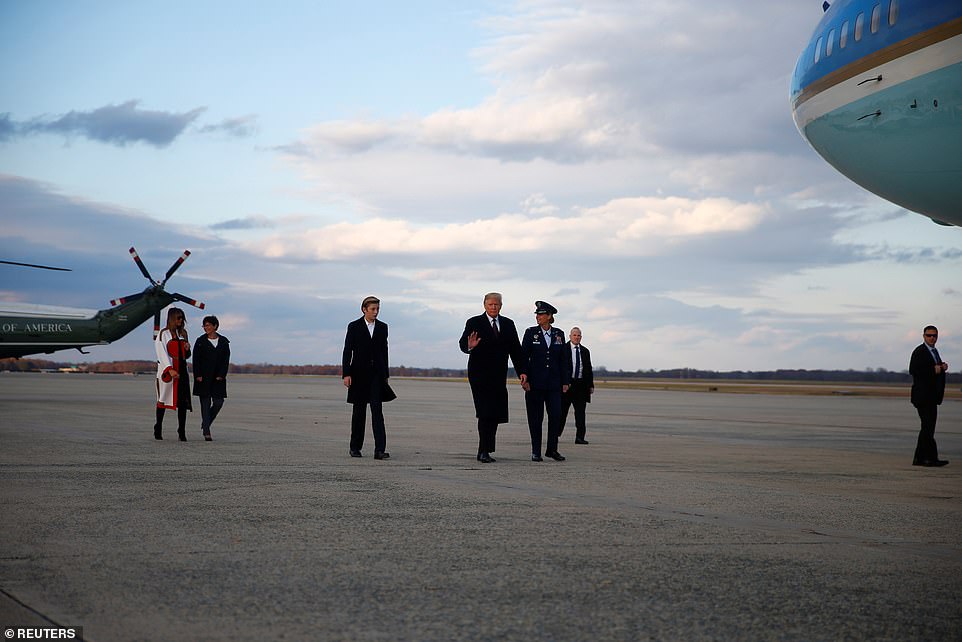 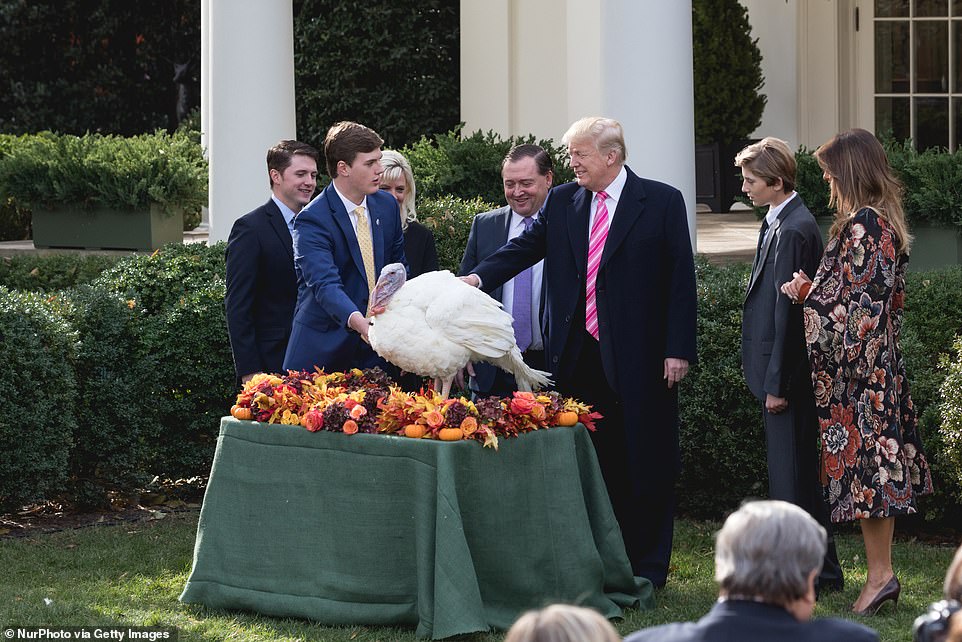 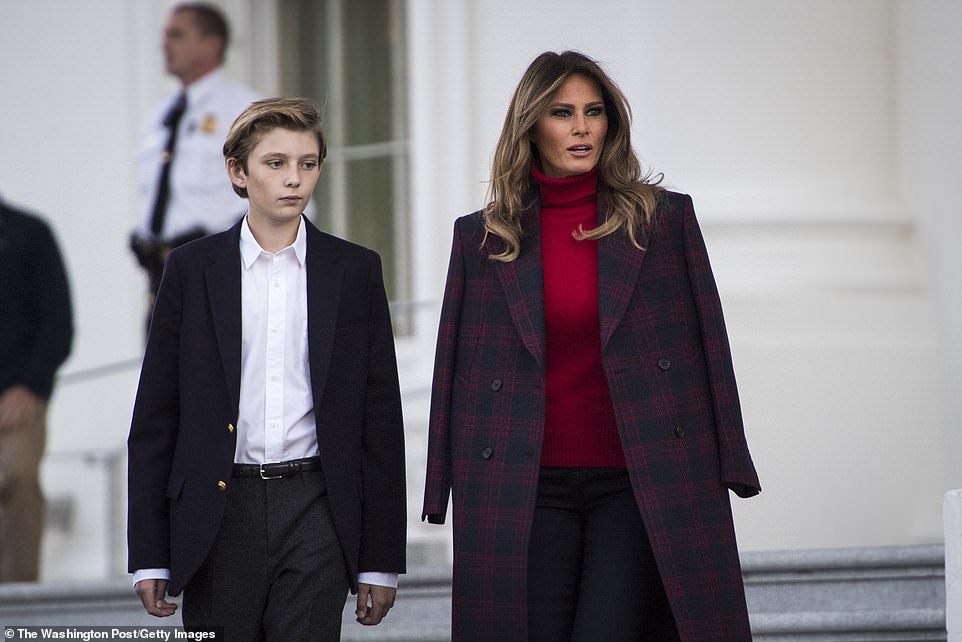 At his last sighting it was noted how much taller he is than his former model mother.

Ivanka Trump and Tiffany Trump were seen boarding Marine One too.

The two sisters boarded Air Force One together at Joint Base Andrews after the first family boarded.

Ivanka put her hand on Tiffany’s back as they walked up the plane. 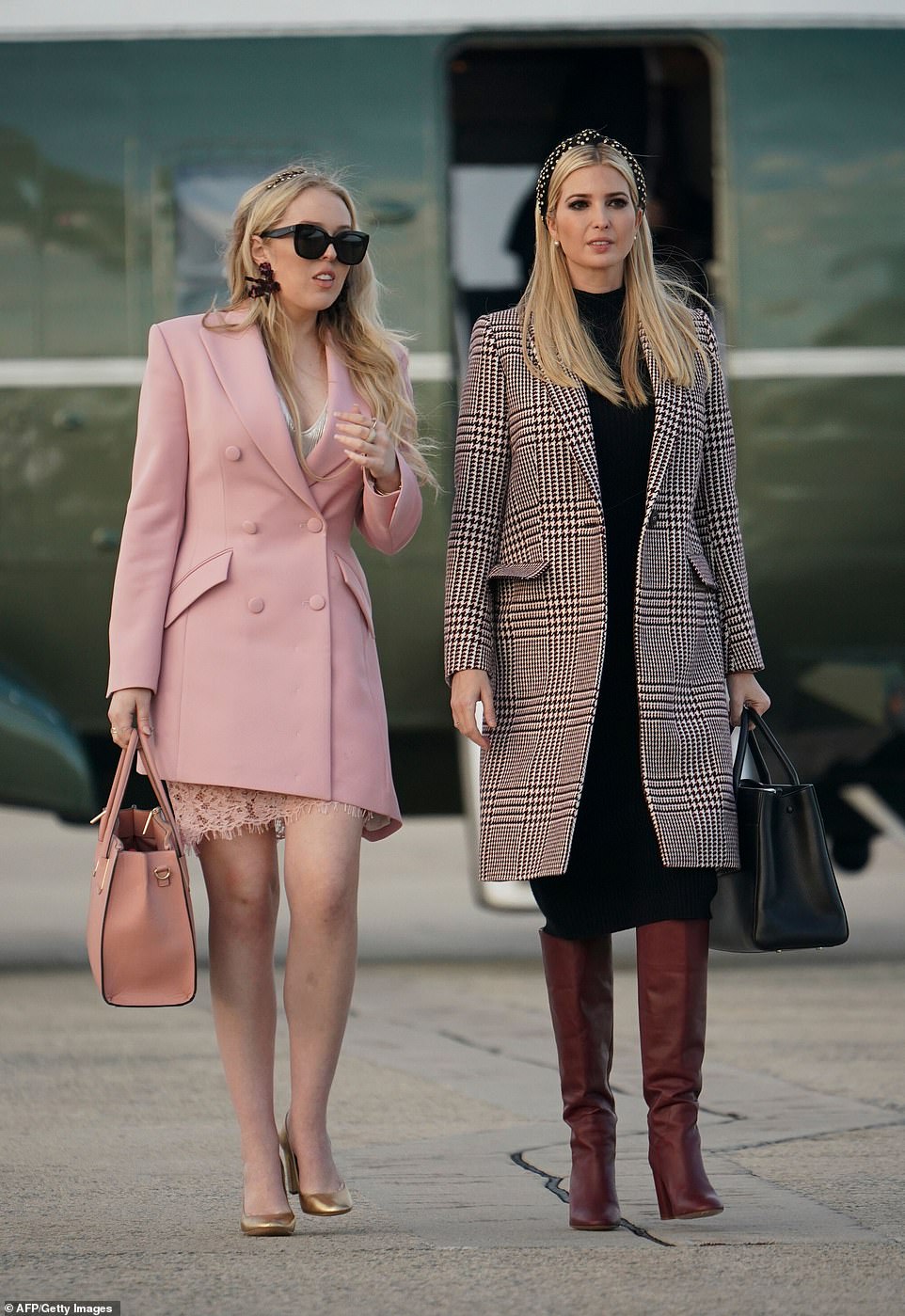 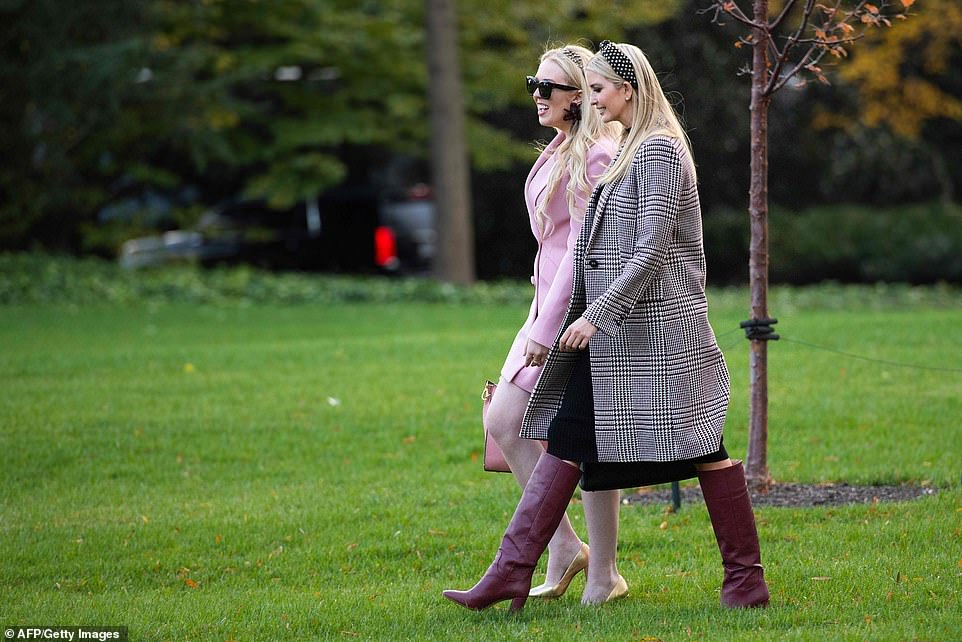 Ivanka wore the same outfit she wore to the turkey pardoning

Tiffany Trump is a student at Georgetown Law School in Washington D.C.