In a novel twist on the traditional finale to Labour’s annual conference, the shadow international trade secretary was for several seconds the only person in the huge Liverpool arena who could be heard.

Shadow Chancellor John McDonnell could be seen stifling a grin as the song began.

Labour conferences have ended with the Red Flag for decades, even during the Blair years when it was seen by many as an embarrassing socialist throwback.

Among the lyrics are: ‘Then raise the scarlet standard high; Beneath it’s folds we’ll live and die; Though cowards flinch and traitors sneer; We’ll keep the red flag flying here.’

In another muscial interlude, Jeremy Corbyn joined in with singing T.Rex hit Children Of The Revolution on stage at the close of his party’s annual conference.

The Labour leader clapped and bobbed and appeared to sing the chorus as the 1972 Marc Bolan number played following his speech. 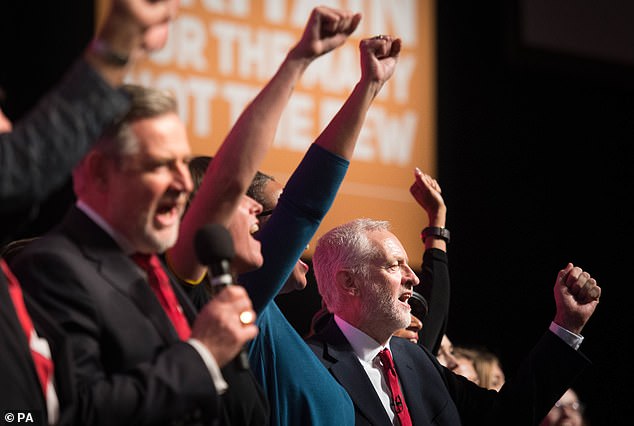 Labour conferences have ended with the Red Flag for decades, even during the Blair years when it was seen by many as an embarrassing socialist throwback. Mr Corbyn joined activists in the socialist anthem today (pictured)

It includes the lines: ‘Well you can tear a plane in the falling rain, I drive a Rolls-Royce ‘cos it’s good for my voice.

The T-Rex single was played after Mr Corbyn and his shadow cabinet joined delegates in the traditional rendition of the hymn Jerusalem and socialist song The Red Flag.