Do you know one of those drivers? The type that when you ask what car they own, reel off the full model name, year, specification, engine, trim level, colour and just about everything else it comes with.

‘I drive a 2020 Python Yellow Audi A3 Sportback S-Line S 30 TFSI S-tronic with the optional five-spoke V-Style diamond cut alloy wheels,’ they tell you with a hopeful look that such level of detail will leave you impressed – when, actually, merely saying they own an Audi A3 would suffice.

It’s nothing short of automotive snobbery, and it’s becoming increasingly common now that people can use finance to stretch their budgets to flashier motors.

But I’ve found the perfect antidote to this automotive affectation. It’s a Golf… but the cheapest one. And this Lidl option might also be one of the best in the range.

Basic pitch: We spent a week with the entry Volkswagen Golf Mk8 to discover if the budget option is worth considering

The long-standing VW hatch certainly has badge appeal. It’s why the Golf outsold the Ford Focus and every other mainstream C-segment model with ease in Britain last year.

Many motorists will probably think that being able to say they drive a Golf gives them the status and credibility that a Renault Megane or Peugeot 308, for example, simply can’t match.

And at a time when eight in ten new cars registered in the UK are financed – with the availability to spread the cost of a new motor over monthly installments – premium brands like VW, BMW and Audi are more attainable to a wider audience than ever.

It’s why the Mercedes-Benz A-Class has been more popular in Britain than the modest Astra for the last few years – and why Ford has scrapped the Mondeo while the 3 Series and C-Class still sell in droves.

But the Golf ‘Life’ I’ve spent a week driving isn’t the version many people want – or will want to tell their mates they own.

In fact, just 4 per cent of buyers of the nation’s most popular family hatch – so less than one in 20 – have gone for this budget version so far this year.

That’s because it’s the cheapest one VW sells – the one that’s used for the ‘price from £23,360’ figure in the brochure and thus the one that people avoid because they think it will offer a pauper level of performance and equipment.

But what if that’s not the case? What if it’s everything you could ever need and more from a family car for the fraction of the price your spec-listing friend paid for his or hers? 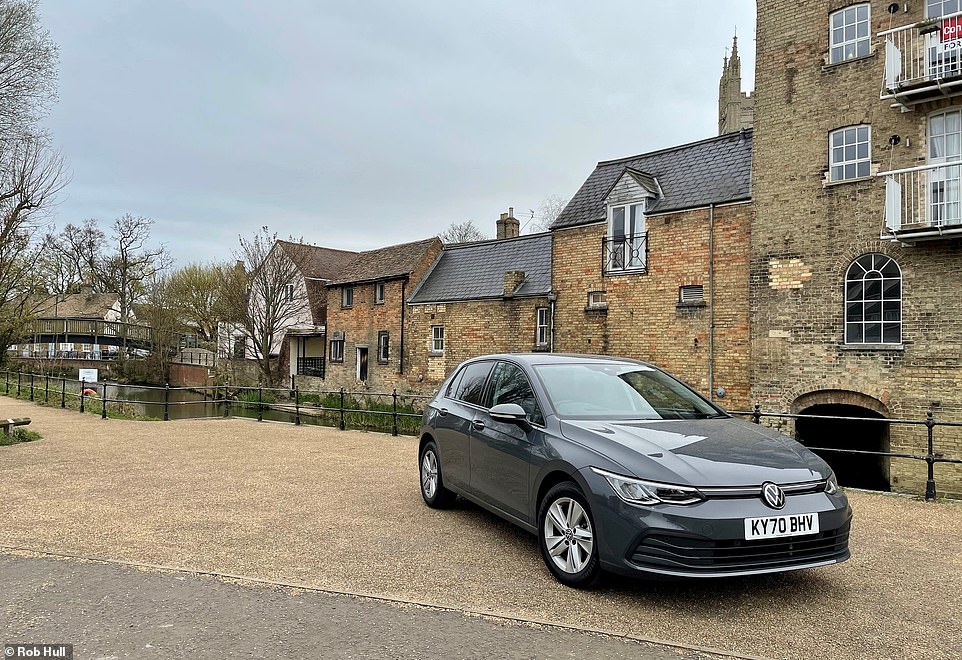 Of all the Volkswagen Golfs ordered so far in 2021, just 4% of customers have picked the 1.0-litre TSI Life that we have on test 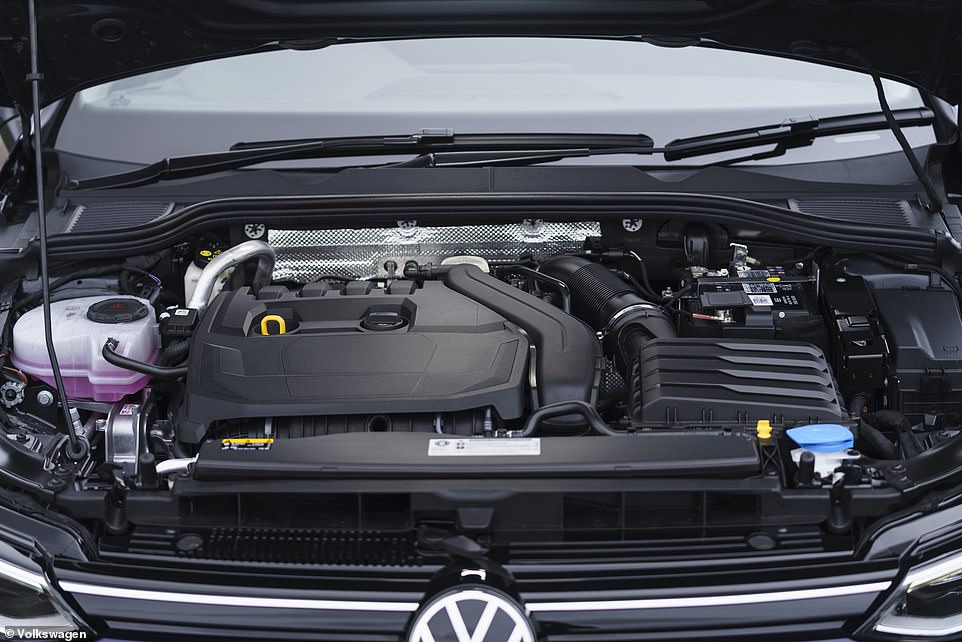 Packing a mere 108bhp, on paper it doesn’t read like it has enough grunt for a four-up family hatch 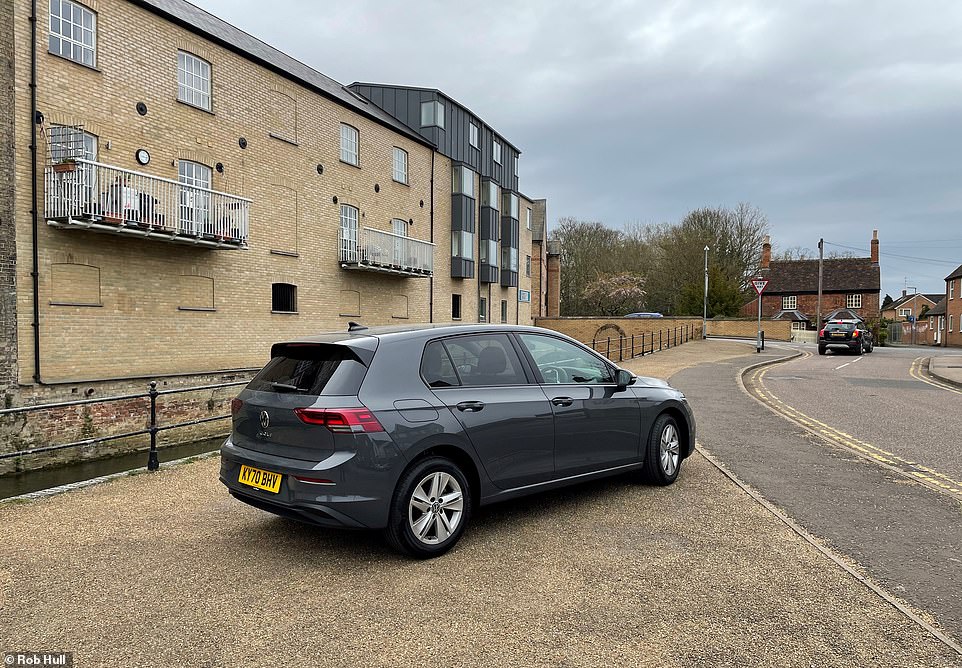 Even on motorways, the engine can hold its own and is surprisingly very quiet, even at high speeds

What’s under the bonnet of the cheapest VW Golf on the market?

The cheapest Golf is powered by a 1.0-litre, three-cylinder engine linked to a six-speed manual gearbox. Packing a mere 108bhp, on paper it doesn’t sound like adequate grunt for a four-up family hatch.

But it’s how this tractable little turbocharged petrol unit develops its power that makes it more than suitable for all types of driving – granted you’re not going to be in a particular rush.

It will more than hold its own on a motorway, accelerating rapidly enough to exit a standard-length slip road and merge at the same pace with the moving traffic.

It will do so incredibly quietly, too. I get the feeling that VW engineers have packed the engine bay and behind the dashboard with sound-deadening materials to cancel out the three-cylinder rumble. Even at high speeds it feels cosseted and hushed, with the cabin muted enough that you can hold a conversation with a back-seat passenger without needing to raise your voice. 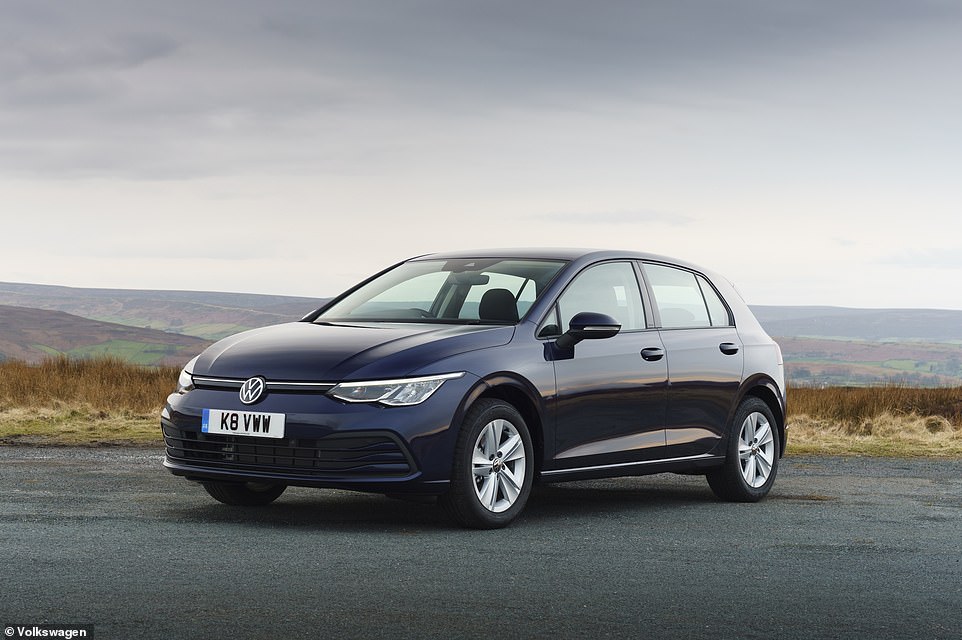 The claimed average fuel economy of the basic Golf is more than 52mpg. In real world driving, we were achieving around 45mpg 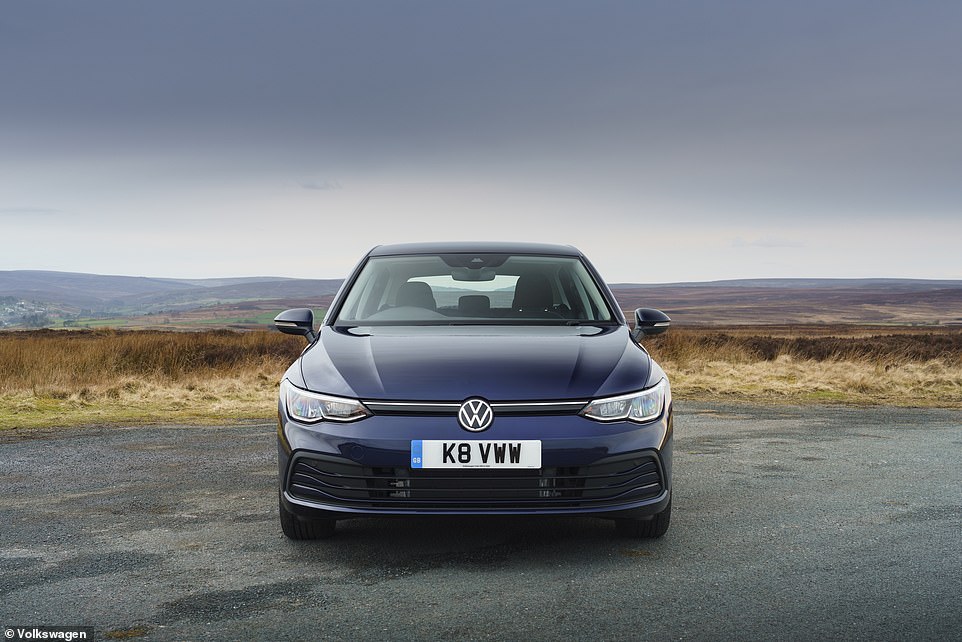 The 1.5-litre petrol engine is the most commonly-picked powerplant for Golf customers. It has around 30bhp more than the 1.0-litre in the basic version, but fuel economy remains unchanged

That said, it is as its best when bumbling through town and back roads, when the little tri-cylinder motor will sip at unleaded at low-revs to provide a more-than-respectable return on fuel economy.

I was averaging over 40mpg on a combination of journeys on different road types – some of them, admittedly, driven like a Dutchman in a pair of clogs.

The 1.5-litre petrol engine is the most commonly-picked powerplant for Golf customers (not as many want a diesel these days) – and I can understand why when it comes to the small premium you pay in a showroom.

In this Life trim, it costs just £600 more (£23,960) than the 1.0-litre version and provides almost another 30bhp without impacting the fuel efficiency. Spread that over a three-year finance deal and it’s peanuts.

As for the manual gearbox, it is slicker than a Mafioso hair style, engaging each gate with precision and a slight mechanical clunk to keep you engaged. 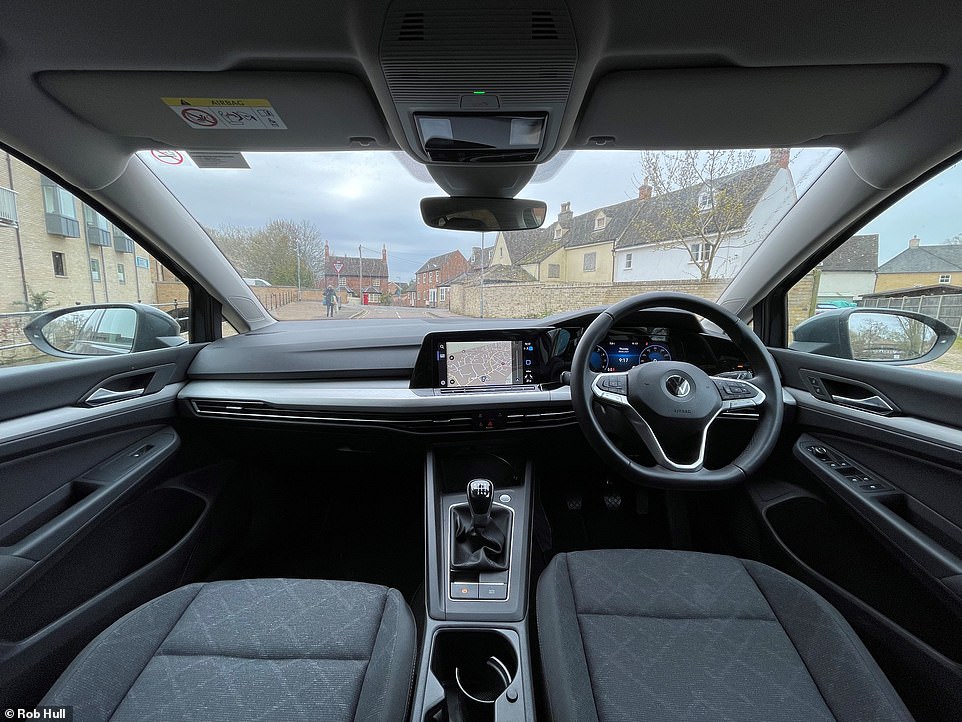 The basic Golf is not wanting for equipment. As standard you get a high-def digital instrument cluster, 10-colour interior ambient lighting you can set yourself, wireless phone charging, front and rear parking sensors, traffic sign recognition, armrests front and back and front-seat adjustable lumbar support 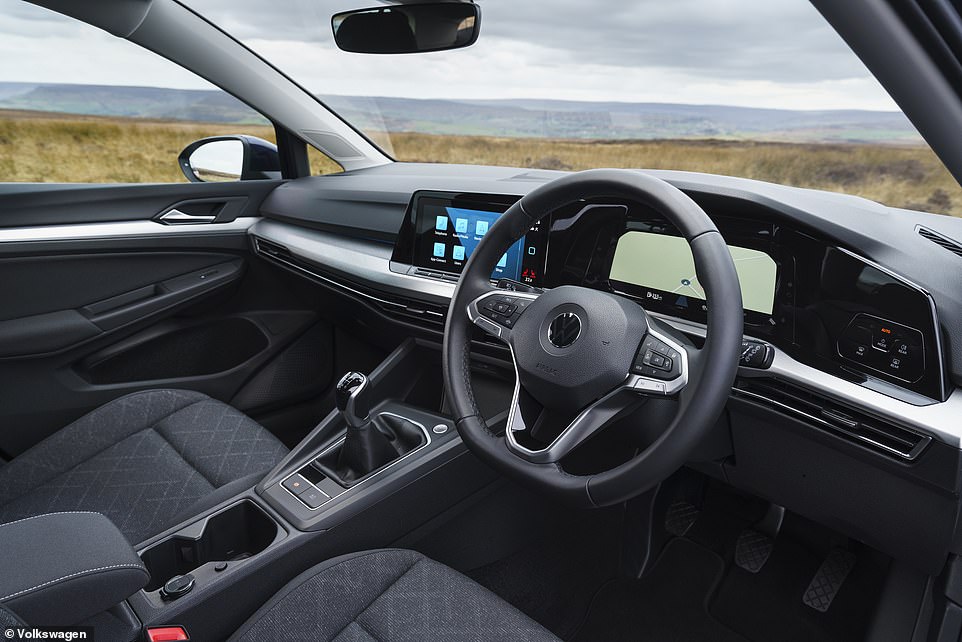 Even the most basic Golfs get a 10-inch touchscreen with sat-nav and also the latest iterations of Apple CarPlay and Android Auto built in. DAB radio is also standard

The basic Golf might be the most comfortable on sale…

This ‘no-frills’ Golf option shouldn’t, on paper, have the plush ride characteristics of more expensive variants of the same car.

That’s because higher-priced models in the range benefit from a multi-link rear axle, which should do a better job of soaking up the shock of scatterings on potholes than the more basic torsion beam suspension fitted to our budget-end version.

However, the less complicated set-up is rather good at paving over the worst that Britain’s tarmac can throw at it.

This is mainly down to one of the most forgotten ingredients for car comfort – wheels and tyres.

While forking out for big rims and low profile rubber might look great on the outside, it’s this budget friendly combo that makes the £23,360 Golf so compliant on the road.

The 16-inch alloy wheels fitted to our test car are only available on the Life and one trim level up: Active. Wrapped with chunky tyre sidewalls, the rubber soaks up the most cavernous of craters, so they aren’t repeated to your backside.

The improved comfort of these smaller wheels and fatter tyres is offset by slightly less agility in the corners than a Golf with bigger rims, with fractionally more pitch on changes of directions as weight transfers in the bends. 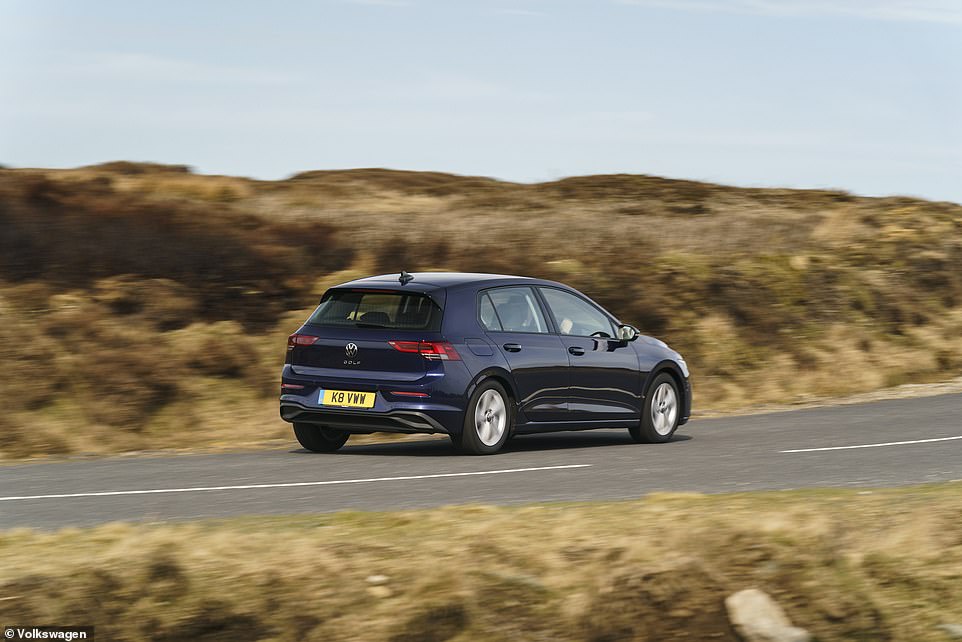 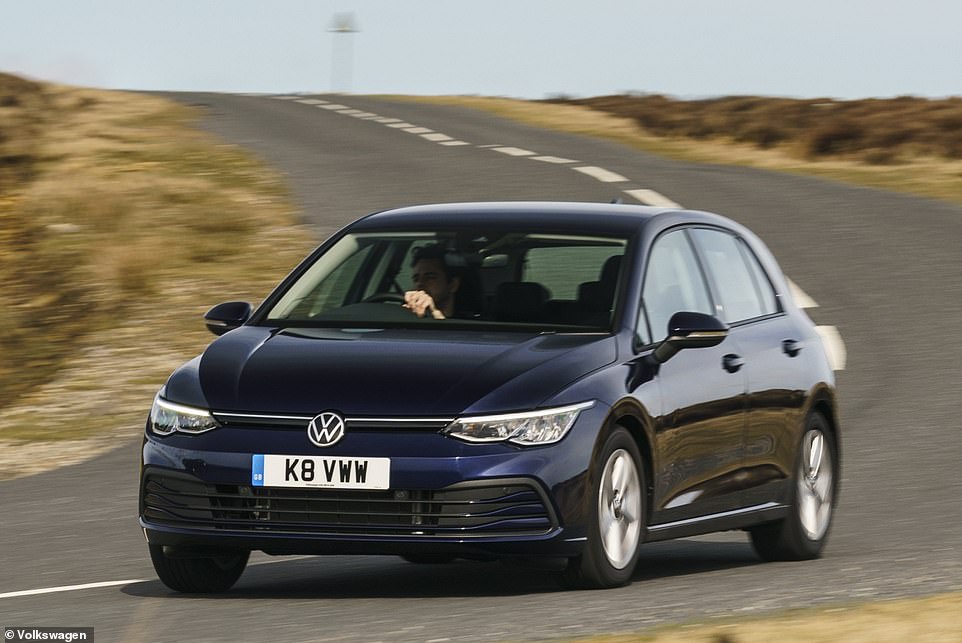 However, for the Average Joe driver, they’ll struggle to feel the difference, especially with the Golf’s impressive steering response and feel that make it seem lighter on its four corners than it actually is.

As for space, it’s more than roomy enough for a fortnight’s holiday [in the UK, of course], with loads of room for a swinging match between siblings in the second row and easy-to-maintain plastics and cloth seats that are functional if not the most luxurious.

The 381-litre boot is square enough to gulp up to five carry-on suitcases. While it’s not the biggest in class, it will fit a folded-down pushchair or a set of golf clubs – depending on which stage of life you’re at. 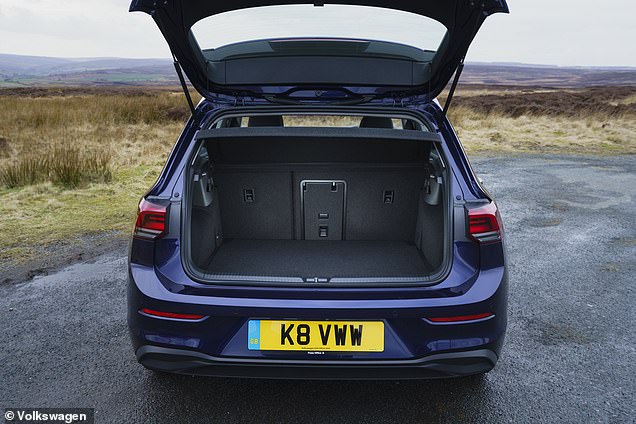 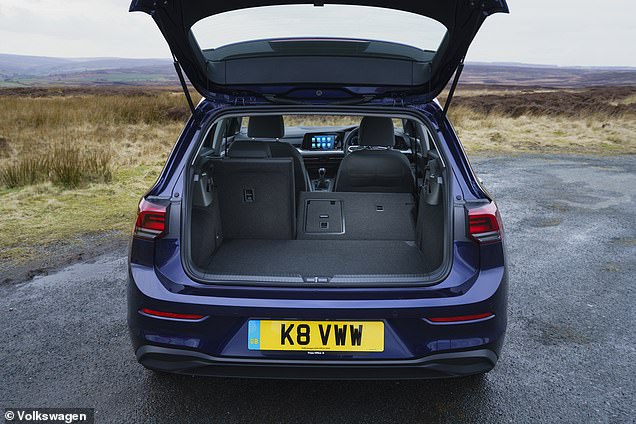 The 381-litre boot is square enough to gulp up to five carry-on suitcases. While it’s not the biggest in class, it will fit a folded-down pushchair or a set of golf clubs – depending on which stage of life you’re at 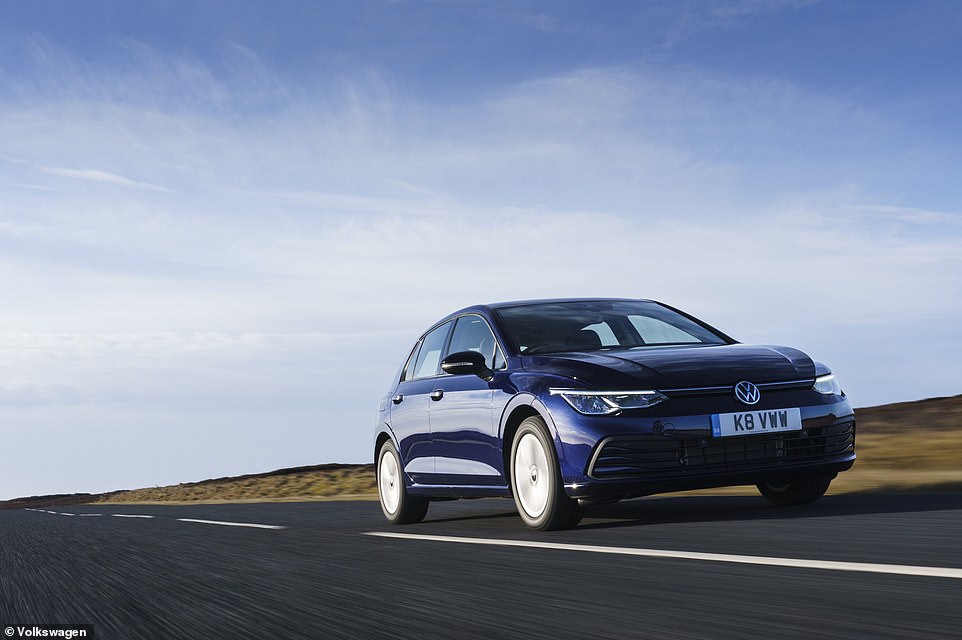 The Golf might be the most popular new family hatch on the market in Britain right now, but there is certainly an element of badge appeal contributing to its success

What do you get in the shape of equipment?

Pretty much everything you would ever need from a modern family hatchback.

It’s not lacking in infotainment tech, either. The ‘boggo’ Life gets a 10-inch touchscreen with sat-nav and it also has the latest iterations of Apple CarPlay and Android Auto built in. DAB radio is also standard.

With this level of kit, you’re not really wanting to turn to a pricey options list.

If it was my £23,000-or-so to spend, I might be tempted to splash out on the optional rear-view camera for £300. And your future self might appreciate the £550 splurged on the ‘Winter Pack’, offering heated front seats and steering wheel for when December mornings rolls back around.

But I could live without either of those options. And I’d still have a car with a more than ample equipment list.

Oh, £100 for a space saver spare wheel is also a must have to avoid the dreaded puncture repair kit – always choose this option, no matter what car you buy, is my recommendation.

Our test car also came with a head-up display and tinted glass, which you can live without. The £100 carpets are a little steep, and the £625 metallic paint option looks good and will help residuals.

Will it fit in my garage? Volkswagen Golf 1.0 TSI Life 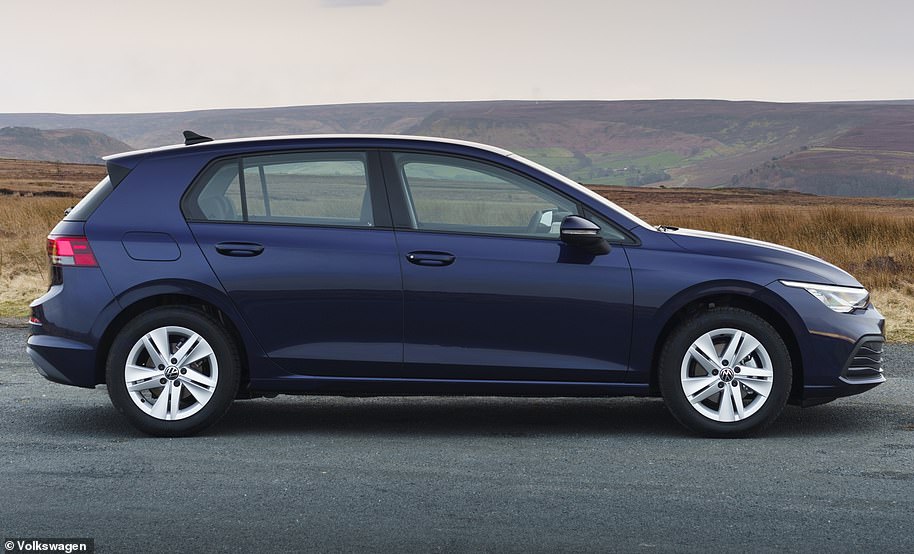 The Golf might be the most popular new family hatch on the market in Britain right now, but there is certainly an element of badge appeal contributing to its success.

The latest Ford Focus and Seat Leon are more engaging to drive and offer slightly more space. Stick a premium badge on either and they’d give the VW a closer run for its money in the sales charts. And while we’re doing comparisons, the Merc A-Class also wipes the floor with the Golf’s interior and infotainment quality.

But the question is, if you have your heart set on a Golf, should you consider the cheapest one VW sells? There’s plenty to say yes. 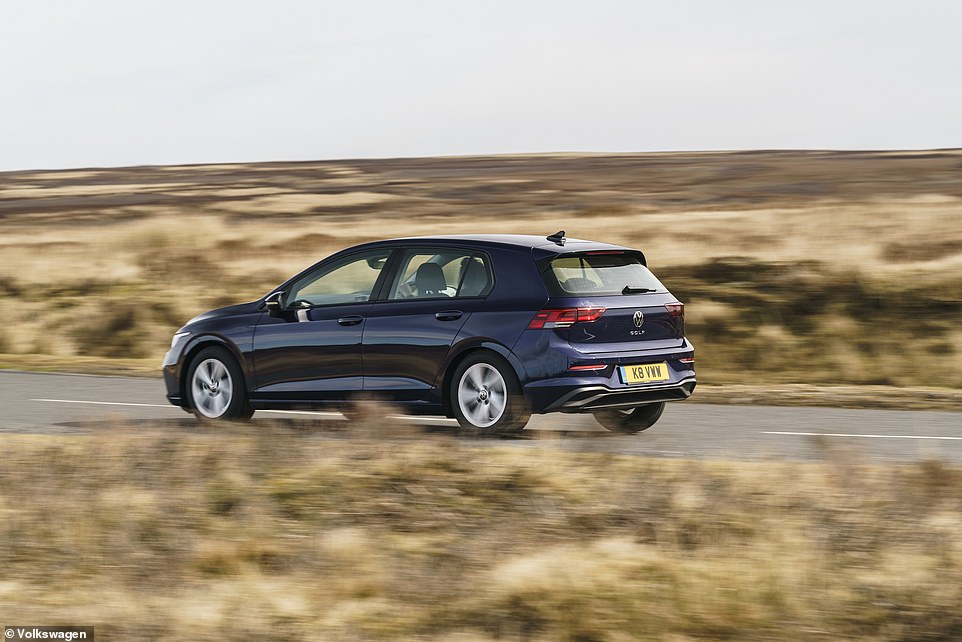 Should you consider the most basic Golf on sale? We think there’s definitely a strong argument for why you should… 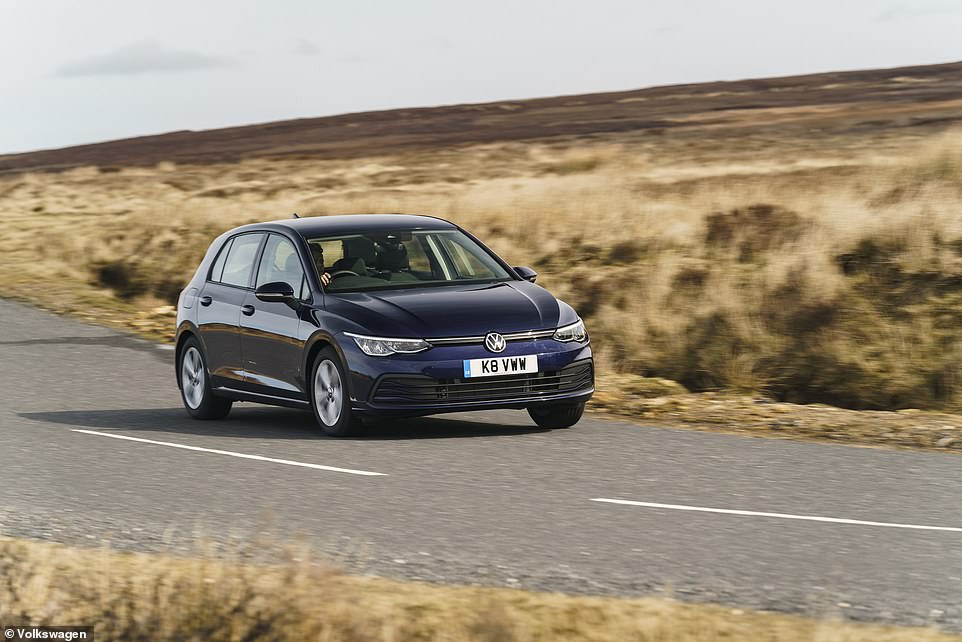 The bog-standard Golf has everything you could ever want or need from a daily family hatchback: roomy, comfortable, an engine that easily copes with all common driving scenarios and fully laden with equipment

That said, being completely honest, I wouldn’t choose this £23,360 1.0-litre TSI model myself.

Not because I found it disappointing, but because the 1.5-litre petrol engine packs more punch but won’t impact your wallet and costs just a fraction more. For £600 extra, it’s worth the additional outlay.

That said, this bog-standard Golf certainly has everything you could ever want or need if you’re in the market for a daily family hatchback. Roomy, comfortable and an engine that – while not the most potent – easily copes with all common driving scenarios. But best of all is that it is laden with so much equipment – especially for an entry version.

Its biggest hurdle will likely be the connotations that come with ordering the cheapest model. But at a time when more people are choosing to shop in Aldi and Lidl rather than Sainsbury’s or Waitrose, it might be time for car buyers to consider the budget-friendly option.

Rattle off the full specification to your mate who pops round for a BBQ and they’ll not be all that impressed – but show them your tech-bustling new Golf and they’ll be none the wiser about its budget price.