Basingstoke pensioner, 93, was suffocated by his electric armchair after he fell over

Pensioner, 93, was suffocated by his electric armchair after he fell over and pressed button on remote which lowered footrest onto his neck, inquest hears

A pensioner was choked to death by his electric armchair after he fell and accidentally lowered the footrest on top of his head, an inquest heard.

An inquest heard how the decorated Second World War veteran had lowered the chair’s remote-controlled footrest after falling and accidentally pressing a button.

David Clarke had lived with his grandfather for ten years and said he had owned the armchair for much longer. In the weeks before his death the remote control had not worked properly.

Mr Clarke described his grandfather as a ‘family man’ and a keen gardener who worked on farms after the Second World War and later as a security guard at Vickers Medical Ltd.

The great grandfather received the Arctic Star for his service to the Royal Navy on board Arctic Convoys in the Second World War.

Mr Clarke said: ‘Sometimes he would try and get to his arm chair by himself.. A few weeks before [he died] the remote had packed in…The buttons, when you pressed them nothing happened but after a while it would work.

‘We got it fixed though about three weeks before.’

Describing finding his grandfather on the morning of November 16, he said: ‘My grandfather was laying on the floor when I came in and the armchair was on top of him.

‘The foot rest was above him and the chair was in the ‘upright’ position.

‘He was on his back. The footrest was on his neck, it was so far between his chin and his chest you couldn’t see his face.

‘The remote control was on the left hand side of the chair. It was right next to him.’

The inquest heard Mr Stainer had been very fit in his younger days but was using a Zimmer frame and had carers to help him from his bed to his armchair every morning and night before his death. 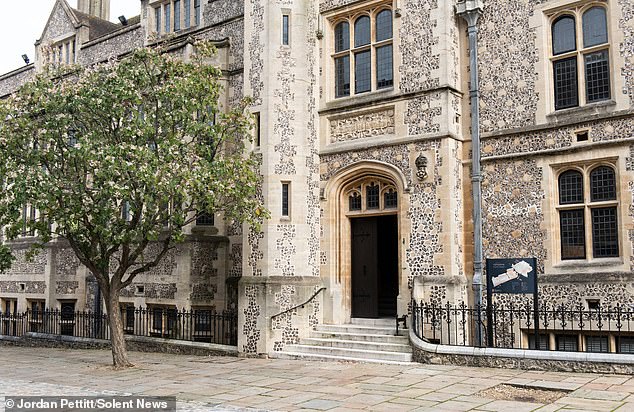 Winchester Coroners Court, Hants, heard the chair had been brought second hand about 20 years ago and as a result they were unable to determine the exact make or model.

A police officer who attended the scene described the semi-detached house in Basingstoke, Hants as ‘clean and tidy’.

Jason Pegg, Area coroner for Hampshire, Portsmouth and Southampton, concluded: ‘The deceased’s neck became trapped in an electrically operated foot-rest of an armchair causing the deceased to asphyxiate.

‘The deceased had come to be on the floor and had operated the electrical foot-rest control by inadvertently pressing the control button.

‘The deceased’s limited mobility contributed to the death.’

The cause of death was given as asphyxia and neck entrapment under the foot rest of his electric armchair and heart disease.