Bats are the ‘death metal singers’ of the animal kingdom

Bat Out of Hell! Bats are the ‘death metal singers’ of the animal kingdom – with a wider vocal range than Mariah Carey, study finds

By Xantha Leatham, Deputy Science Editor For The Daily Mail

Bats are the ‘death metal’ singers of the animal kingdom and have a wider vocal range than Mariah Carey, researchers have discovered.

The flying mammals can produce a range of frequencies that far exceeds that of humans and for some sounds, use the same ‘growling’ technique used by death metal singers, a study suggests.

A team from the University of Southern Denmark have for the first time filmed what goes on in a bat’s larynx when it produces sound.

Professor Coen Elemans, who led the research, said: ‘We identified for the first time what physical structures within the larynx oscillate to make their different vocalisations.

Bats are the ‘death metal’ singers of the animal kingdom and have a wider vocal range than Mariah Carey, researchers have discovered

In humans, these false vocal folds can help provide a safeguard for our airways, squeezing together to prevent material being inhaled into the lungs when swallowing or choking.

Some people have the ability to squeeze them together when they sing – producing a rough, gravelly sound.

Bats make a similar growling noise when flying in and out of a densely-packed roost, the researchers discovered, producing a very low-frequency sound that could represent aggression or annoyance.

This noise is the opposite to their high-frequency echolocation calls used when hunting. 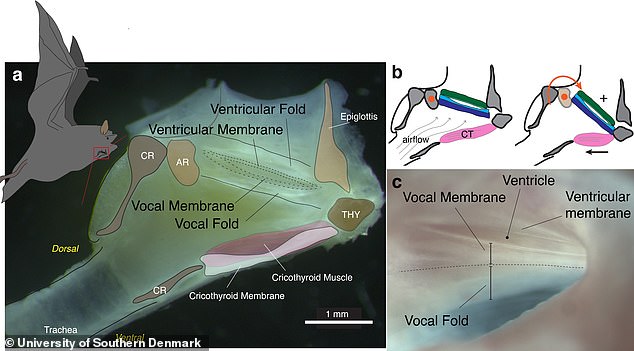 The flying mammals can produce a range of frequencies that far exceeds that of humans and for some sounds, use the same ‘growling’ technique used by death metal singers. University of Southern Denmark researchers filmed what goes on in a bat’s larynx when it produces sound

In all, the normal vocal range for a bat spans seven octaves, the researchers said.

‘That is remarkable’, Professor Elemans said. ‘Most mammals have a range of three to four, and humans about three.

‘Some humans singers can reach a range of four to five, but they are only very few.

‘Well-known examples are Mariah Carey, Axl Rose and Prince. It turns out that bats surpass this range by using different structures in their larynx.’

Writing in the journal Plos Biology, the team said: ‘We show that bats vibrate extremely thin and light membranes extending from their vocal folds to make their high-frequency ultrasonic calls for echolocation.

‘To extend their limited lower vocal range, bats make aggressive calls with their ventricular folds – as in death metal growls.’

The vocal folds studied were from Daubenton’s bats, which are found in the UK.

DO VAMPIRE BATS EVER FEED ON HUMANS?

It’s long been thought that a species of vampire bat known as the hairy-legged vampire bat only feeds on the blood of birds. 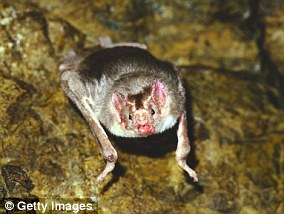 But, scientists have now discovered for the first time that they sometimes feed on humans too.

The worrying prospect could lead to the spread of disease, as vampire bats are known to be major transmitters of rabies.

Researchers from the Federal University of Pernambuco in Brazil set out to look at how the species would behave in a situation of scarcity of birds.

The team analysed 70 faeces samples from a colony of hairy-legged vampire bats, living in the Catimbau National Park in Brazil.

To their surprise, they found that three samples contained traces of human blood.

The researchers believe that human intrusion in the national park could be driving the vampire bats to try mammal blood.

In their paper, published in Acta Chiropterologica, the researchers wrote: ‘The record of humans as prey and the absence of blood from native species may reflect a low availability of wild birds in the study site, reinforcing the impact of human activities on local ecological processes.’