Freezing temperatures in Texas are having a devastating impact on the city’s wildlife, including its largest bat colony.

The Mexican free-tailed bats, live in the crevices of Houston’s Waugh Bridge, but the cold temperatures have caused them to go into hypothermic shock, causing them to fall onto the pavement below.

To save them, Mary Warwick, the Wildlife Director of the Houston Humane Society, has been going down to the bridge with a flashlight and collection box to rescue the cold-stunned bats.

She then brings them back to be rehabilitated and placed them next to a heat source to raise their body temperature.

Freezing temperatures in Texas are having a devastating impact on the city’s wildlife, including its largest bat colony which live in the crevices of Houston’s Waugh Bridge 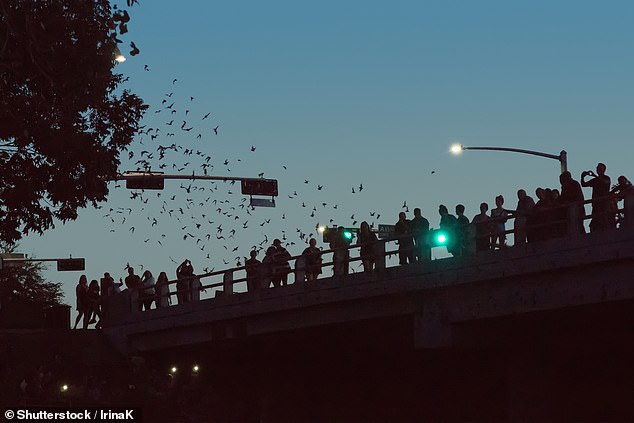 Silhouettes of people on the bridge watching the flight of thousands of bat. There are normally 300,000 residing in the colony but the cold temperatures is sending them into shock

‘After that, we give them fluids under their skin to hydrate them,’ she explained to ABC 13. ‘Then, several hours after that, we can start offering them food.’

Warwick, city’s only bat rehabilitator plans to go keep going back to bridge until the freeze ends.

Warwick has now placed foam on the ground for the bats to have a soft landing and took almost 200 home on Friday to care for them.

The Waugh Bridge colony had around 300,000 bats before experiencing traumatic weather events such as Hurricane Harvey, the freeze in February 2021, and now this most recent winter freeze. 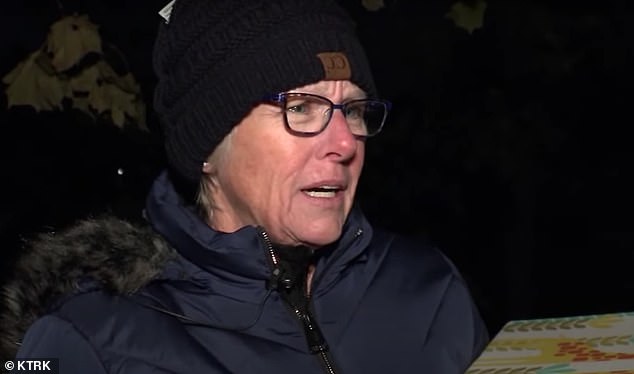 Mary Warwick, city’s only bat rehabilitator plans to go keep going back to bridge until the freeze ends 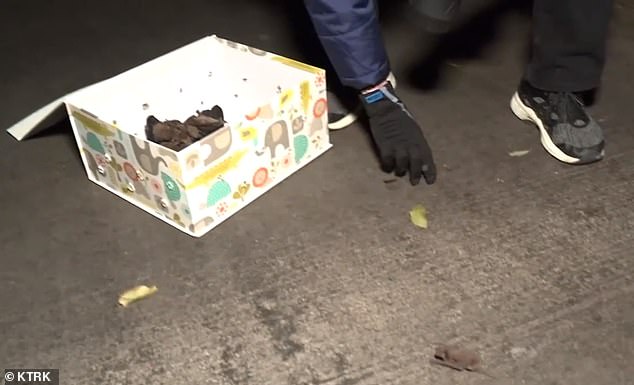 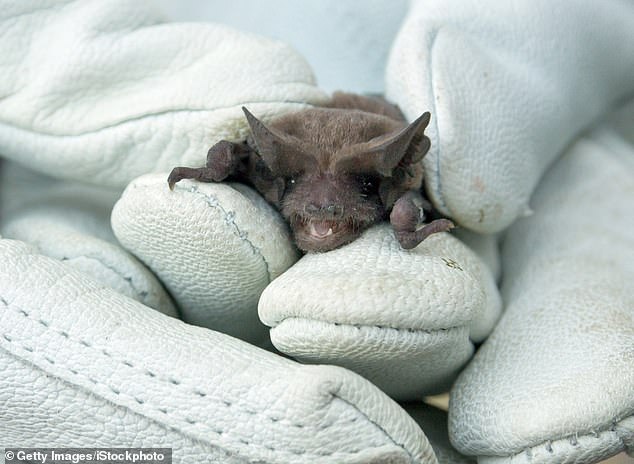 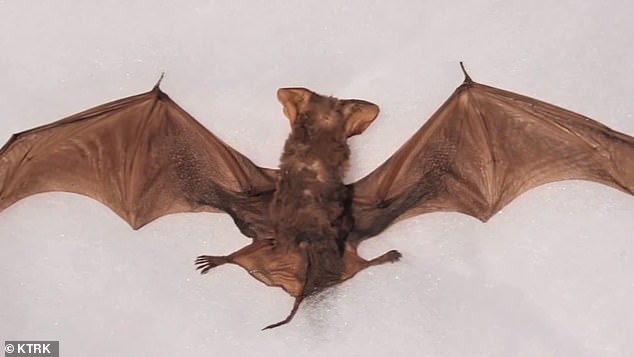 When the bat’s bodies go into shock, they fall onto the pavement

Warwick said that traumatic weather events like these may force the bats to migrate further south and find a new home outside of Houston.

‘We might lose them,’ Warwick fears. ‘They might migrate further south. I don’t know. I hope we can keep them. I hope if we can build a community that takes care of them through things like this so that we can keep them here longer.’

Warwick says the bats are important to the ecosystem because they eat pests such as moths and mosquitoes.

Warwick says anyone who finds a bat should place it in a box and bring it to the Houston Humane Society for rehabilitation, while remembering not to touch the bat with bare hands.

‘You just need to get a box or a shoe box. Get some cardboard. Sweep them into the box. Keep them warm. Keep them dry. Don’t do anything else with them. Tape the box up and bring them to us,’ Warwick said.

After rehab and when the freeze ends, the bats will then be released to rejoin the colony. 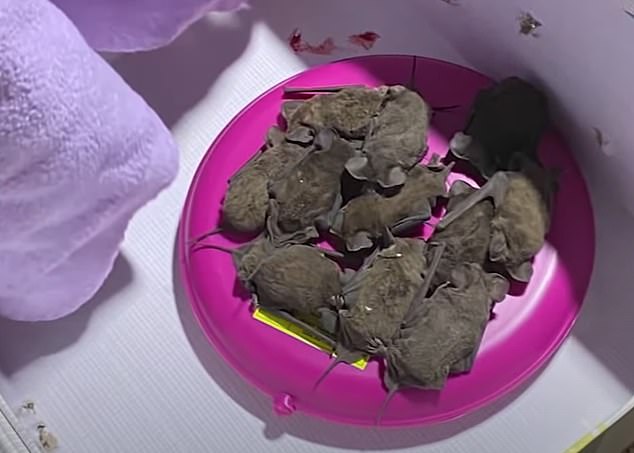 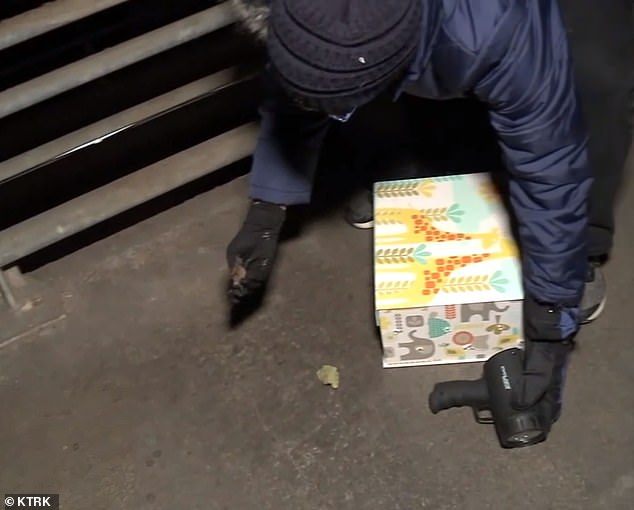 Mary Warwick, the Wildlife Director of the Houston Humane Society, has been going down to the bridge with a flashlight and collection box to rescue the cold-stunned bats 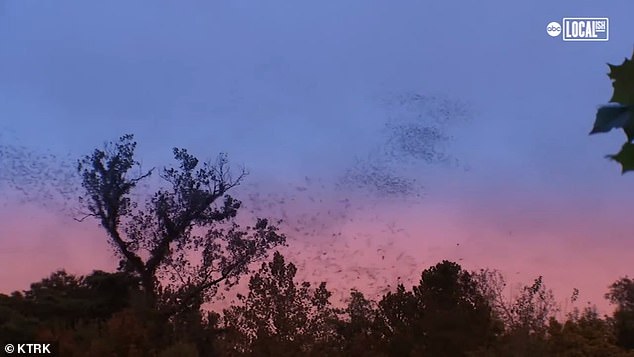 The winter storm continued to pummel parts of the U.S. with blizzard conditions on Saturday evening after its powerful Arctic winds left over a million customers without power earlier in the day and caused Christmas travel nightmares.

At least 23 weather-related deaths have been confirmed across 11 states as heavy snow, howling winds and dangerously frigid temperatures kept much of the nation, including the normally temperate south, in a frozen grip for a third straight day.

The National Weather Service warned that blizzard conditions in the Great Lakes region caused by lake-effect snow will continue into Saturday night, including in Buffalo.

The ‘bomb cyclone’ winter storm, one of the fiercest in decades, had already forced the cancellation of over 3,300 US flights on Saturday and the delay of nearly 7,500 more, a day after nearly 6,000 were scrapped, according to tracking website Flightaware.com.

Transportation Secretary Pete Buttigieg tweeted Saturday that ‘the most extreme disruptions are behind us as airline and airport operations gradually recover’ – words that travelers stranded at airports including Atlanta, Chicago, Denver, Detroit and New York were holding on to. 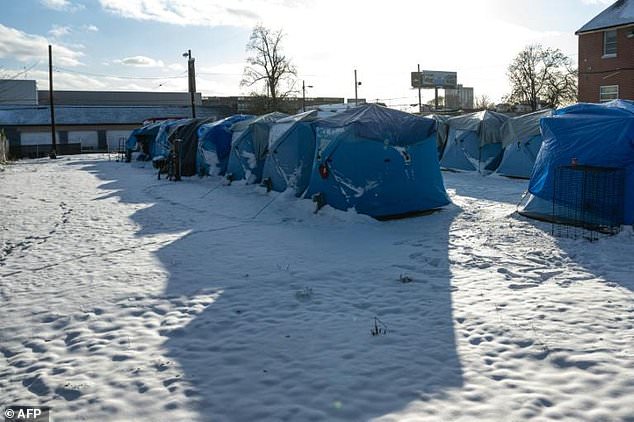 A row of tents is seen in a tent encampment established for homeless people, on Saturday in Louisville, Kentucky 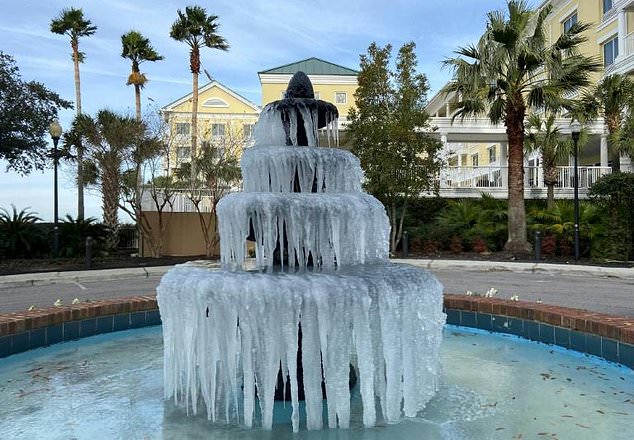 Ice adorns a fountain in Charleston, South Carolina, on Christmas Eve as a deadly winter storm blanketed much of the United States with frigid temperatures, fierce winds and blinding snow