Battersea Dogs and Cats home appeals for home for pets

Gwyn is just one of Battersea Dogs and Cats home many residents looking for a new home this Christmas.

The four-year-old greyhound came to Battersea after his racing career came to an end.

Battersea helped rehome hundreds of greyhounds following the closure of dog tracks at Walthamstow and Wimbledon – and now works with several greyhound charities to stop dogs being dumped when their days on the track are over.

Greyhounds have a life expectancy of 12 to 13 years, but are usually only racing until they are three or four. 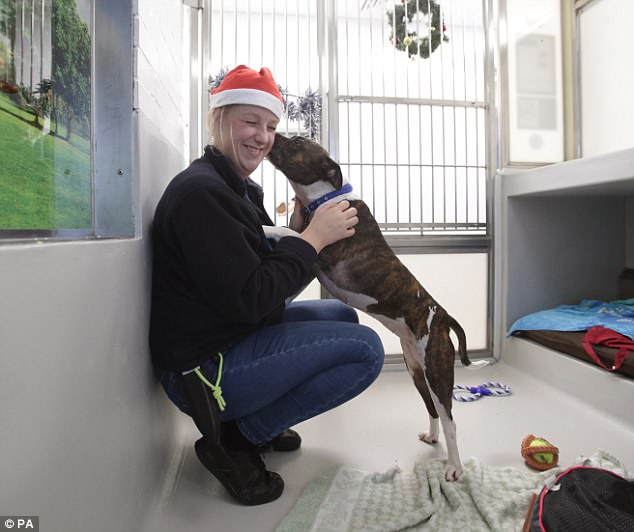 Becky Fisher, rehoming and welfare manager at Battersea Dogs & Cats Home in London, with Gwyn, a male four-year-old greyhound, who is looking for a new home this Christmas

Rehoming manager Becky Fisher said: ‘There’s a lot of misconceptions around greyhounds, people think they need lots and lots of walks, but actually they only need 15 or 20 minutes a day to have a sprint around, then they just want to cuddle up on a sofa.

‘What we do find is that it can be a real adjustment going into a home, but most of them do adapt to it really nicely.’ 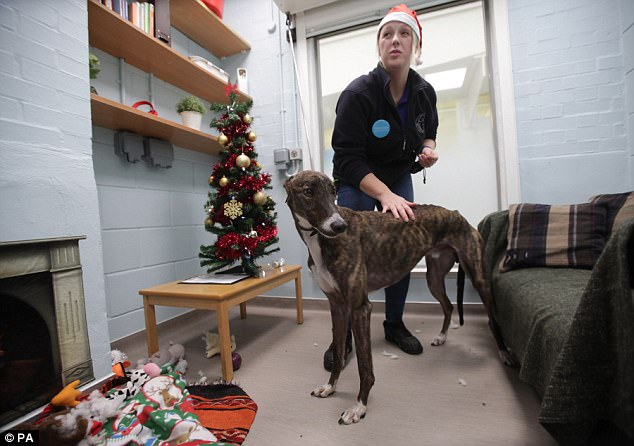 Rehoming manager Becky Fisher said: ‘There’s a lot of misconceptions around greyhounds, people think they need lots and lots of walks, but actually they only need 15 or 20 minutes a day to have a sprint around’ 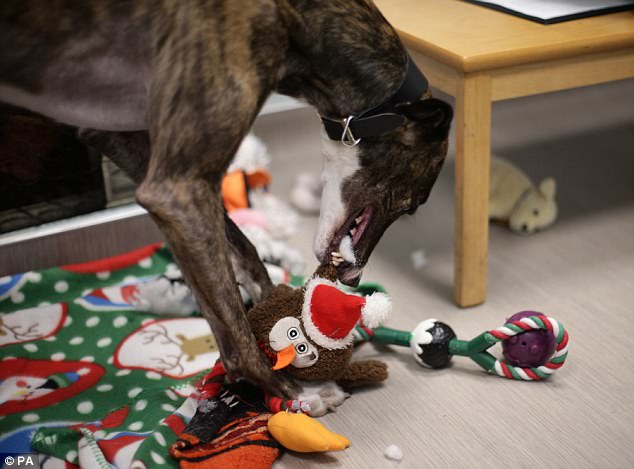 Greyhounds have a life expectancy of 12 to 13 years, but are usually only racing until they are three or four

Another inseparable pair looking for love are four-year-old saluki Thelma and her best friend, eight-year-old Louise, a border terrier.

The two dogs were found camping out on wasteland, but staff think they must have come from the same home because they refuse to be parted from one another – and even have an adapted kennel so they can share.

Thelma is so pleased with life she has a bad case of ‘happy tail’, meaning she wags her tail so much she has fractured the tip. 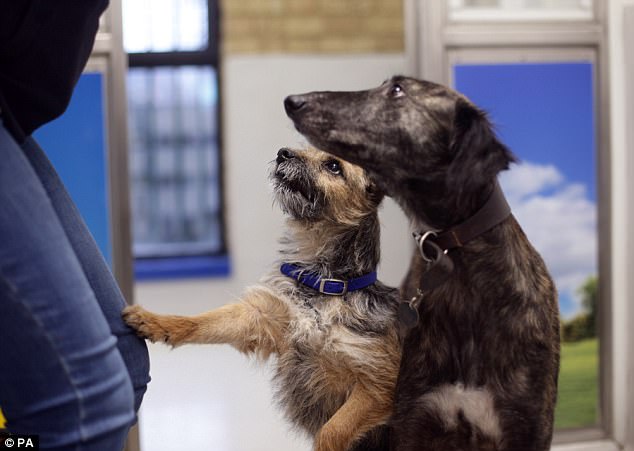 Inseparable pooch pals! Four-year-old Sluki Thema and eight-year-old border terrier Louise who are both looking for a new home this Christmas 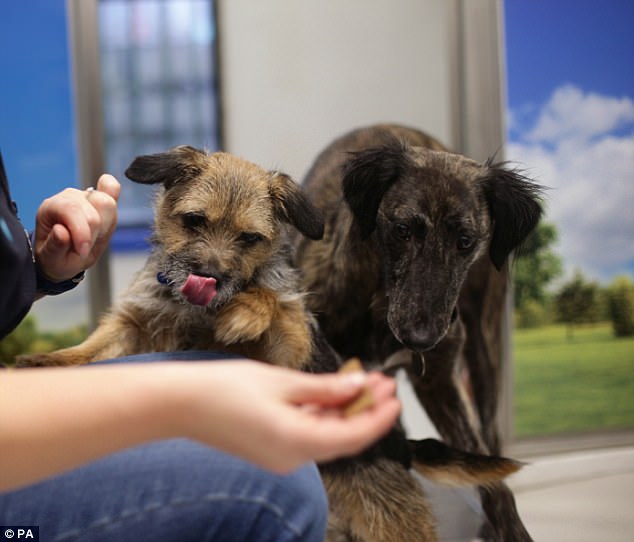 The two dogs were found camping out on wasteland, but staff think they must have come from the same home because they refuse to be parted from one another – and even have an adapted kennel so they can share

The wave of terror attacks that rocked Britain this year has unexpectedly provided new opportunities for some of Battersea’s dogs.

The jump in demand for security and explosives detection dogs following tragedies like the Manchester Arena bombing and the London Bridge attacks coincided with Battersea’s expansion of its working dogs programme. 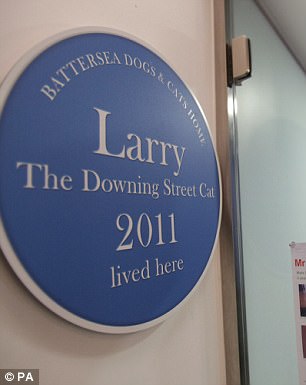 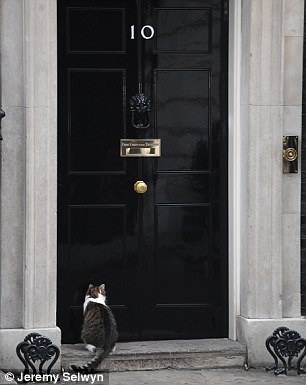 A plaque at Battersea Dogs & Cats Home, London, to celebrate the rehoming to Downing Street of Larry the cat, pictured right outside Number 10

Dogs that find themselves at the home because they are just too energetic to be contented family pets are now assessed to see if they can be found a suitable canine career.

As well as scent dogs, there is also a demand for patrol dogs, guide dogs, sheep dogs and medical detection dogs, which can be trained to sniff out bladder cancer from urine samples or a change in sugar levels in a diabetes sufferer.

Breeds that have become the latest craze often end up on Battersea’s doorstep when their new owner realises the reality of what they have taken on.

In recent years, the home has seen a number of huskies and malamutes arrive after Game Of Thrones superfans realised the issues around owning a real-life ‘direwolf’. 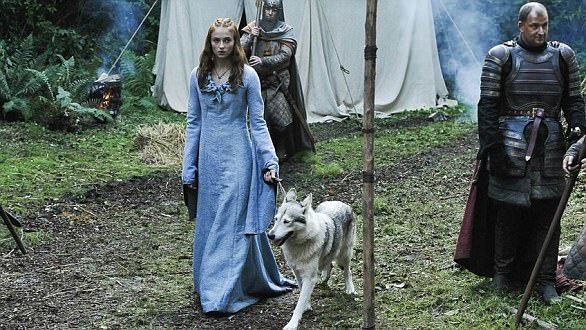 Both breeds need a huge amount of exercise and hate being left alone for long periods, making them unsuited for city living.

So far this year, 74 huskies and malamutes have been brought in, and Battersea attributes the drop to an education campaign to get people to think twice before buying the dogs.

Equally, the fashion for flat-faced breeds like French bulldogs and pugs, which often have extensive health problems, has seen a jump in these breeds arriving at Battersea.

Alice Christie, a spokeswoman for the home, says: ‘We tell people to imagine breathing through a drinking straw – that’s what it’s like for these breeds their airways are so narrow.

‘Often the people who bring them in aren’t irresponsible owners, they just can’t afford the vet bills.’

Despite years of campaigning to persuade Britons to think twice about giving dogs or cats as gifts – summed up in the Dogs Trust’s slogan ‘A dog is for life, not just for Christmas’ – staff know that they will still see an influx of dogs in a few months’ time when their novelty wears off.

Rehoming and welfare manager Becky Fisher says: ‘Around March we do have more dogs gifted in to us or come in as strays.

‘Although we don’t know, we do think that might be dogs and cats that people have got as Christmas presents, and especially when they’re quite young and they would have been a puppy or a kitten around Christmas time.

‘Maybe people have got them without really thinking about what they have taken on, or people have been given them as present when they actually didn’t necessarily want to take on the responsibility of a dog or a cat around the rest of its life.’

There has been a drop in the number of kittens being left at the home, however, and staff are hopeful that the fall is down to years of campaigning to get families to neuter their cats.

But cattery manager Rachel Saunders says she ‘can’t be certain’ as it may be down to people getting rid of unwanted kittens via avenues like GumTree.

Working dogs manager Jeff Moore and his team of two staff take a look at all the younger dogs who come in to see if they’ve got what it takes to become a working dog.

He explained: ‘We assess their ball drive – so whether the dog wants to play with toys and whether they are happy to work for that and do a little bit of searching.

‘It depends because we cover areas like police and search dogs and with the prisons, but also medical dogs. So they have to have that willingness to work but they also have to be sociable.’

He added: ‘A dog that I put into a police work environment can be a little bit more ‘full on’ and they will need a lot more control type thing, whereas the medical detection dogs because they are living in a family environment they need to be a good all round dog.’

Mr Moore started at Battersea in July this year having spent 25 years with the Met’s dog section – 14 of those years as a trainer.

Police forces across the UK are always on the lookout for talented German Shepherd puppies to train as patrol dogs and spaniels to work as drug and explosives detection dogs.

It also makes economic sense for the police to take rescue dogs – a puppy from a breeder would cost around £2,000 with no training at all, whereas Battersea only ask for a £135 donation per dog to cover the cost of vets’ bills.

Unfortunately, as they are reluctant to take dogs older than two years, this avenue is blocked for many of Battersea’s arrivals.

But private security firms, the Border Force and large public venues and prisons are also on the lookout for these breeds and are willing to take slightly older animals. 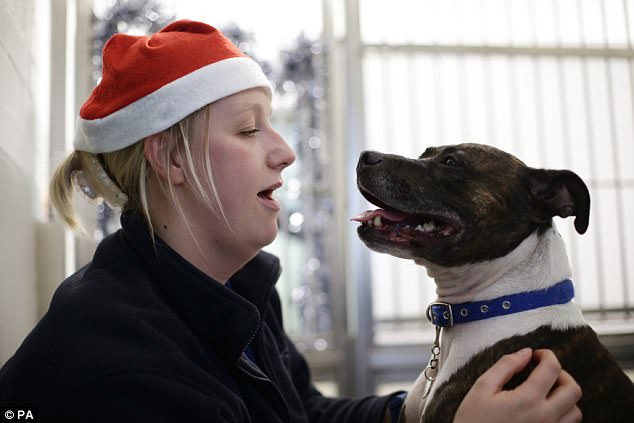 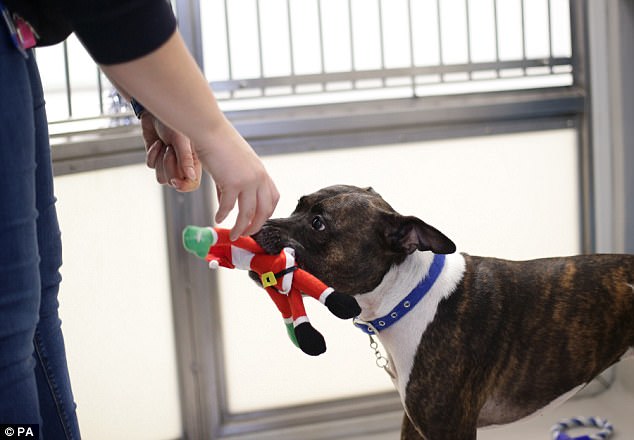 The tragedies of 2017 have also opened up new opportunities for the Staffordshire bull terrier – by far and away the most common breed to arrive on Battersea’s doorstep.

Often acquired as ‘muscle dogs’ since the pitbull was banned, the loyal and mostly gentle breed is often dumped when they fail to do the job of making their owner look tough, Battersea spokeswoman Alice Christie said.

Last year 899 Staffies were left at Battersea – 53 per cent more than the next most left breed, mongrels, at 425.

But now security firms and even the police are turning to Staffies to train up as sniffer dogs, as their noses are as sensitive as traditional breeds.

Mr Moore said: ‘It’s hard because they’ve got a reputation – a lot of people don’t want to work with the bull breeds unfortunately.

‘We have just been given the go ahead with Avon and Somerset police force that is willing to use the Staffordshire, so we are going to source one and hopefully I’ll be able to train it and it will be able to go into their programme. It’s quite exciting because it will open up a whole new area for that type of dog,’ he said.

‘It could be really good. It will be one of those things where if we can get one dog up and running and successful it will open the door for a few more.’