Norway are 12th in the world rankings, nine places below England.  England beat Norway 2-1 in the last 16 en route to coming third at the World Cup in Canada four years ago.

The best known attacking threat in the Norway team is Barcelona’s Caroline Graham Hansen, who may operate up front, off the No 9 Isabell Herlovsen.

The two complement each other well, with Herlovsen the target woman and Hansen, with her skill and sleek running, playing off her and getting in between the lines.

The really fascinating battle may take place on the Norway left. Look out for the Norwegian No 16 Chelsea’s Guro Reiten — an outstanding, tricky, pocket rocket down that flank.

Nikita Parris is always willing to double up defensively and that will be necessary. But she and Lucy Bronze — England’s stand-out pairing in the World Cup — will also be looking to do some raiding of their own. 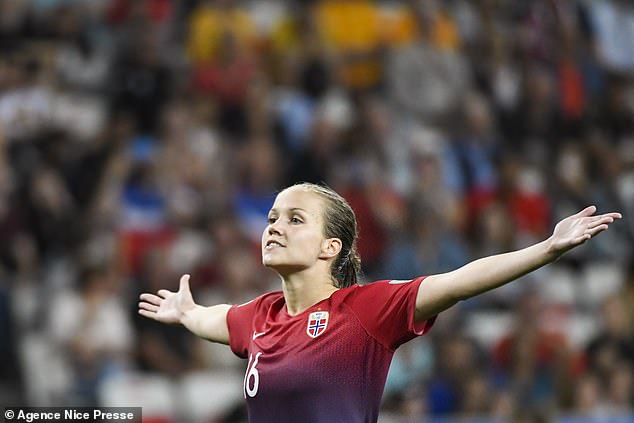 Guro Reiten is an outstanding, tricky, pocket rocket down the left flank for Norway

Utility player Kristine Minde may be operating at left back and that could be somewhere England can take advantage. It could be real cat and mouse down that flank. I expect Beth Mead to start and use her pace to run at Ingrid Wold, too. The defensive wide positions are Norway’s weakest areas.

Norway can play an impressive passing game and I’ve been very impressed by the young pairing of Ingrid Engen, 21, and Vilde Risa, 23, the midfielders who operate in front of the defence. They’re fearless under pressure, breaking up play, starting attacks and are very much at the hub of Norway’s team.

Goals will be hard earned against the central defensive partnership of captain Maren Mjelde and Maria Thorisdottir, who are both at Chelsea. Mjelde is the captain and the fulcrum and the pair know each other very well, even though they don’t play together week-in, week-out. But you look at England’s forwards and that’s where the shining talent is.

It will be a tough test but I expect England to win. 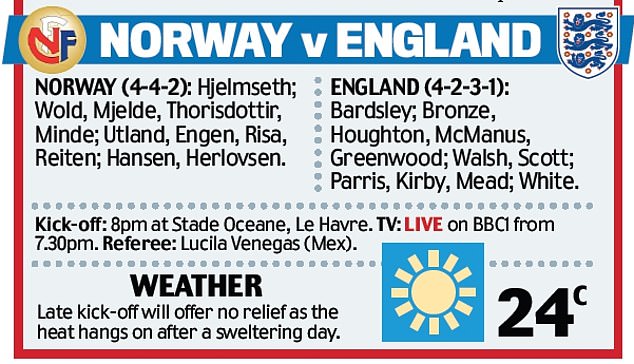 Rachel Brown-Finnis is a former Liverpool, Everton and England goalkeeper. She is working for BBC Radio 5 Live and BBC TV at the World Cup