The lethal weapon called Mo is the one on their minds. ‘Sim-Salah-Bim’ — ‘Abracadabra’ — proclaimed a huge headline in Munich on Wednesday.

The stadium TV screens were also absorbed with what Liverpool’s gem might do in Kiev as the clock counted down to kick-off.

The Egyptian and his swashbuckling team are insurgents on the continental ramparts, while Wednesday night’s opponents — 17 times European Cups lifted between them, with the Spaniards chasing this trophy for a third consecutive year — are the establishment figures, the emperors of the continent. 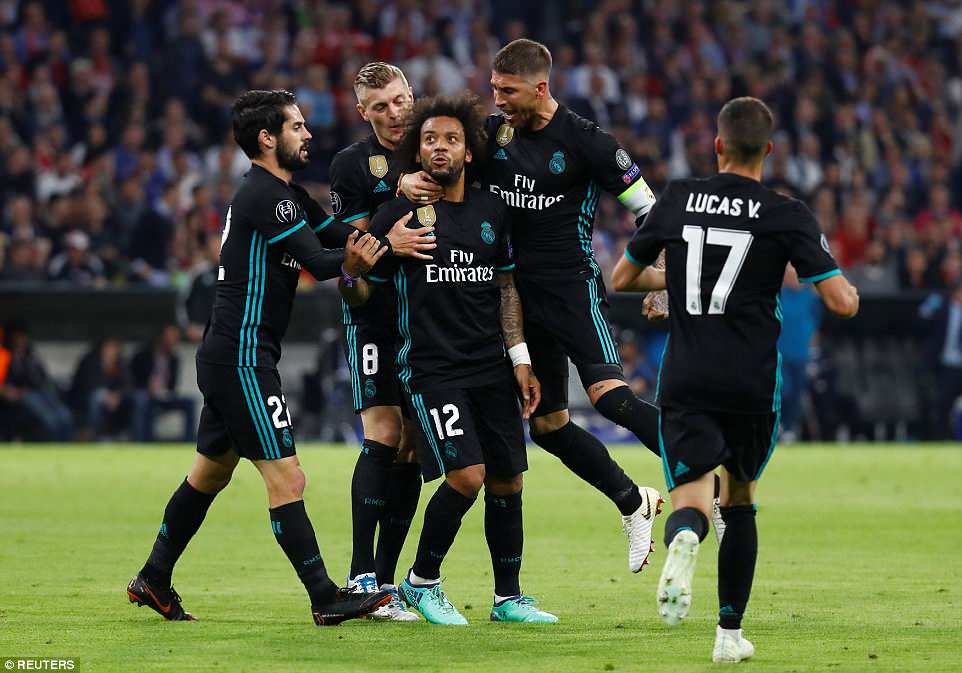 Real were poor in the first half, however a minute before the break they equalised through Marcelo’s fine strike 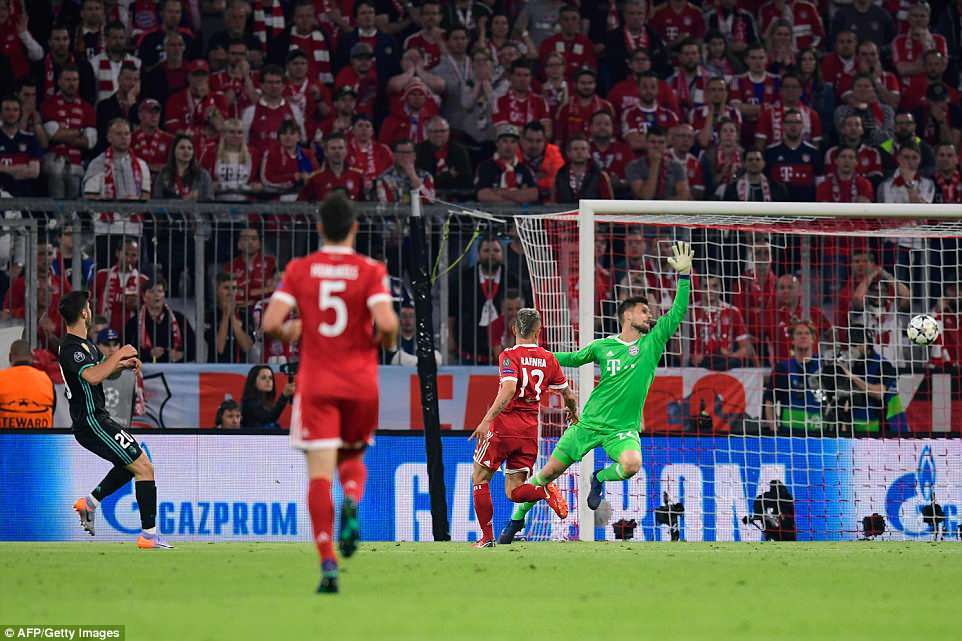 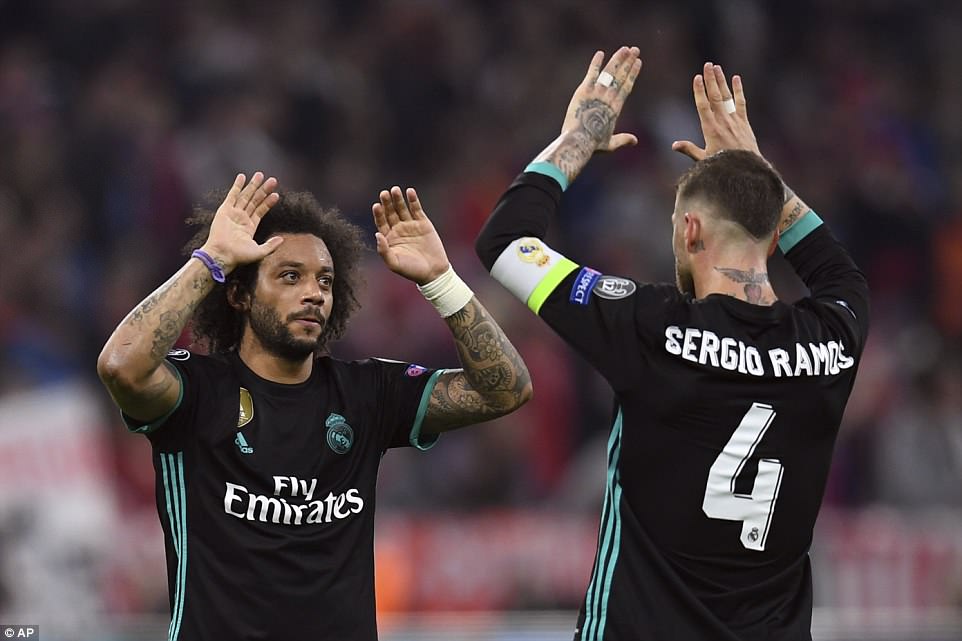 Bayern burst from one end to the other to take the lead against Real, Joshua Kimmich showing brilliant athleticism as he got forward to score. For more stats and facts, visit our exclsuive MATCH ZONE service by clicking here.

Well, the evidence of this aristocratic clash is that the walls just might come tumbling down, if Liverpool can only manage to make the next step.

It looks like a meeting with Cristiano and co, after goals either side of half-time snuffed out the early hopes of a German side who squandered 12 attempts

That would mean the presence of a pathological winner in Ukraine – Ronaldo has now won 96 Champions League ties, more than anyone else – and more of that legendary refusal to yield in pursuit of a trophy which they have come to view as their entitlement. Sergio Ramos was virtually centre back and goalkeeper by the end, marshalling a side who yet again won without deserving to.

But there are chinks of light if Liverpool meet them. Real had conceded as many goals as Roma before this match and it showed. They certainly did not display much spark. After all that had gone before at Anfield, this felt anaemic and old school. 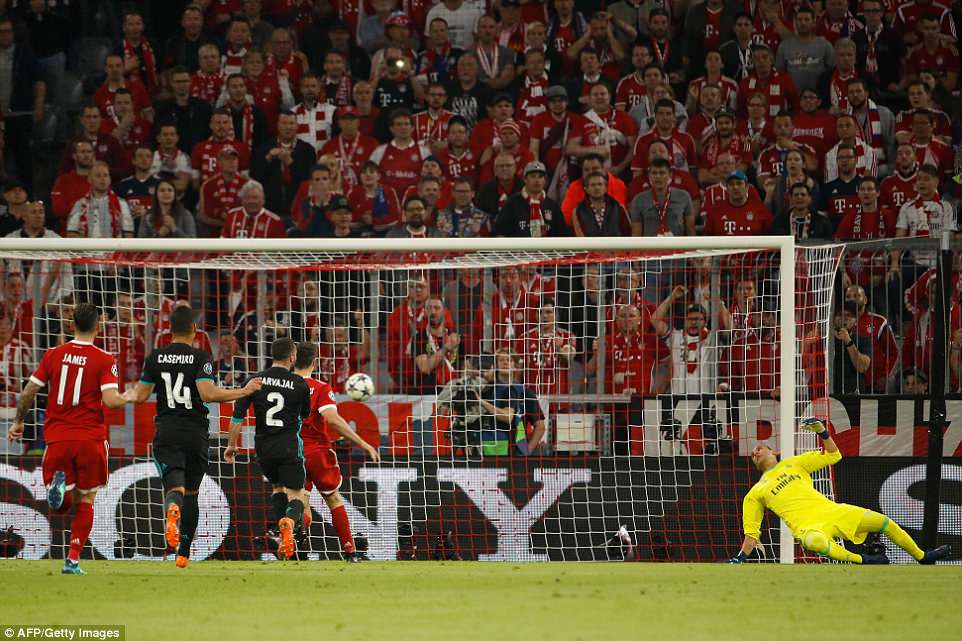 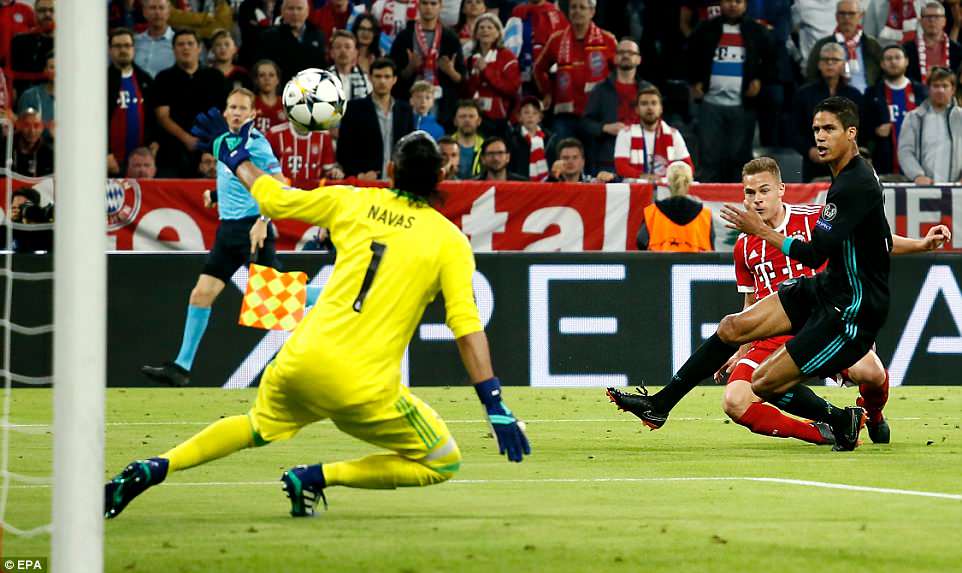 Navas gambled that Kimmich would either cross or shoot across goal, allowing the right back to fire home at the near post 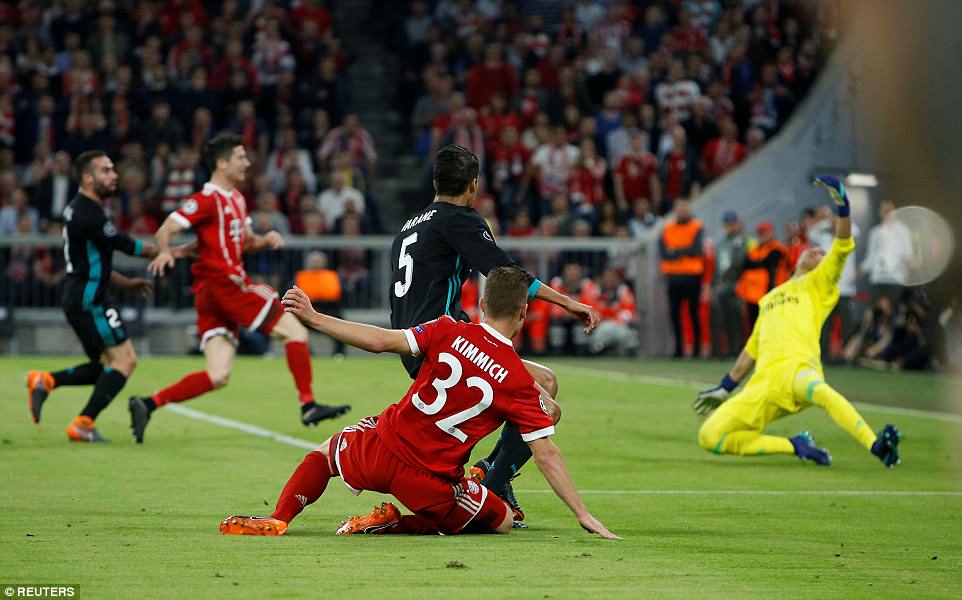 Kimmich looks on as his 27th-minute shot finds the back of the net, despite the efforts of Raphael Varane and Navas 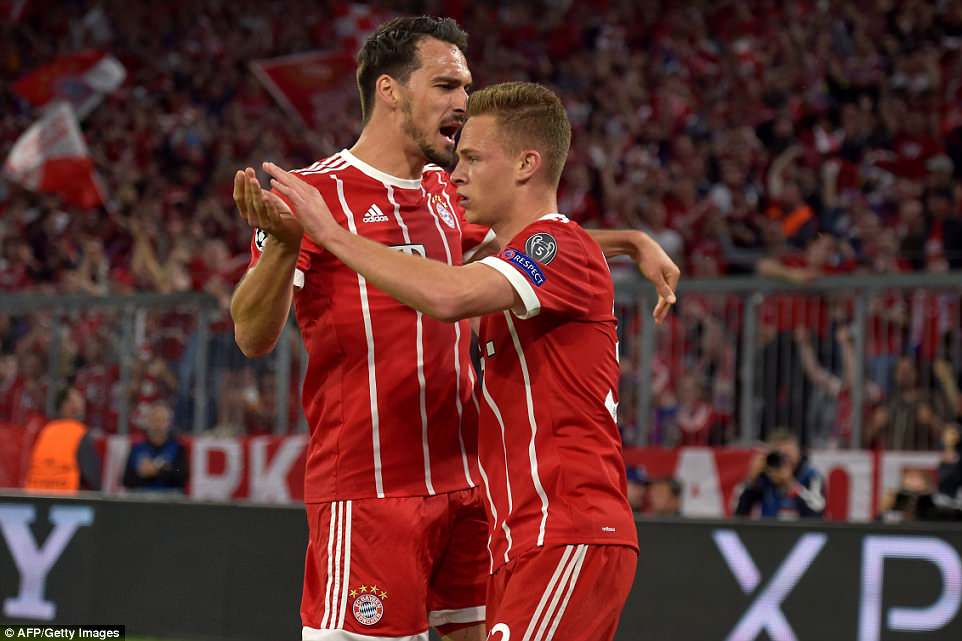 Briefly, there was German electricity. The five men posted in front of Javi Martinez were all of an attacking disposition and they began as if this was their last match on earth, spooking Dani Carvajal into two elementary early errors, but they could not maintain what they had started.

Barely half an hour had gone before Arjen Robben and Jerome Boateng had limped out. It only compounded the problem that substitute Thiago Alcantara was untidy and impeded the flow. The game became monochrome, with James Rodriguez’s wonderful forward passes providing rare specks of colour.

Real offered even less in the first half. ‘We started bad,’ admitted Zinedine Zidane. Ronaldo, whose hopes of a record-breaking goal in every tie of a Champions League tournament have gone, received little supply. His side’s set-piece defending was questionable, as was goalkeeper Keylor Navas. 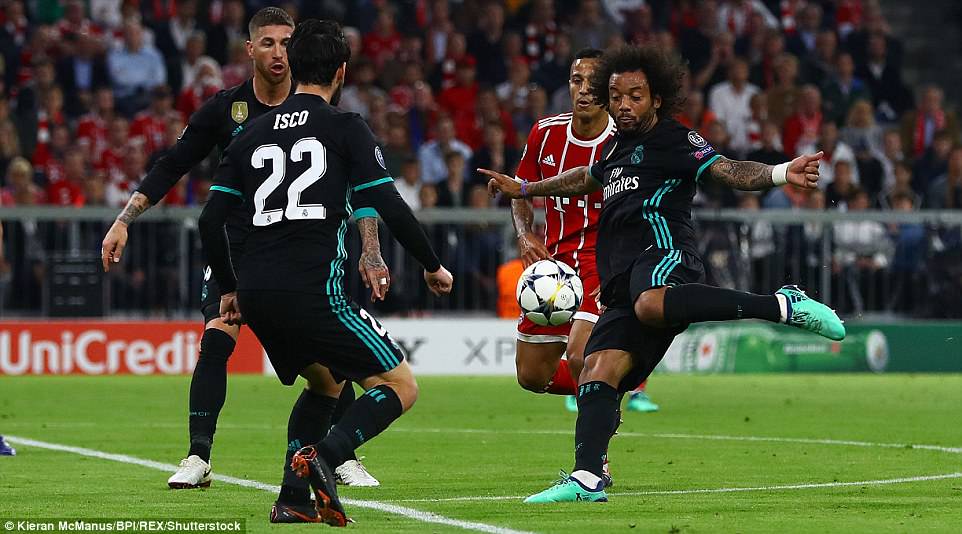 Marcelo made it 1-1, the left back’s finish from 25 yards was high quality – a left-footed strike into the far bottom corner 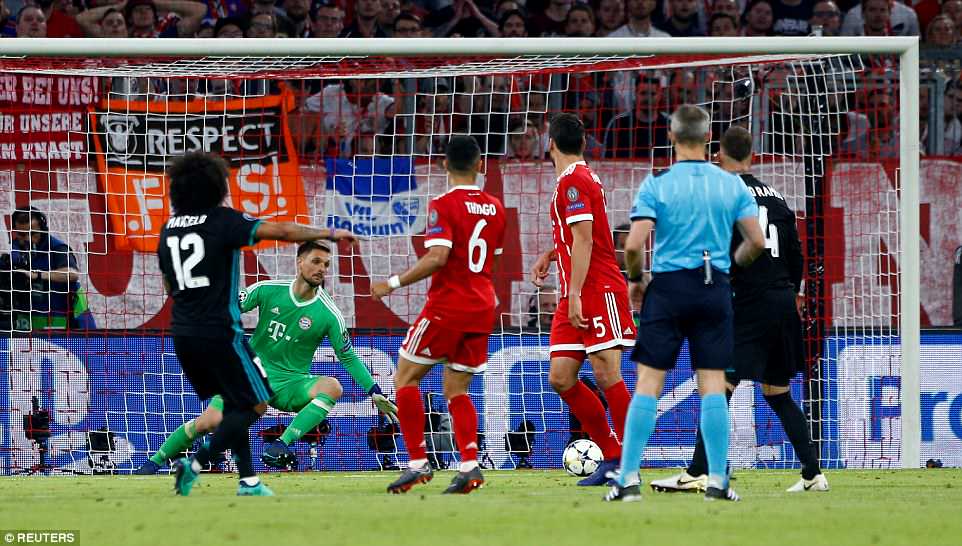 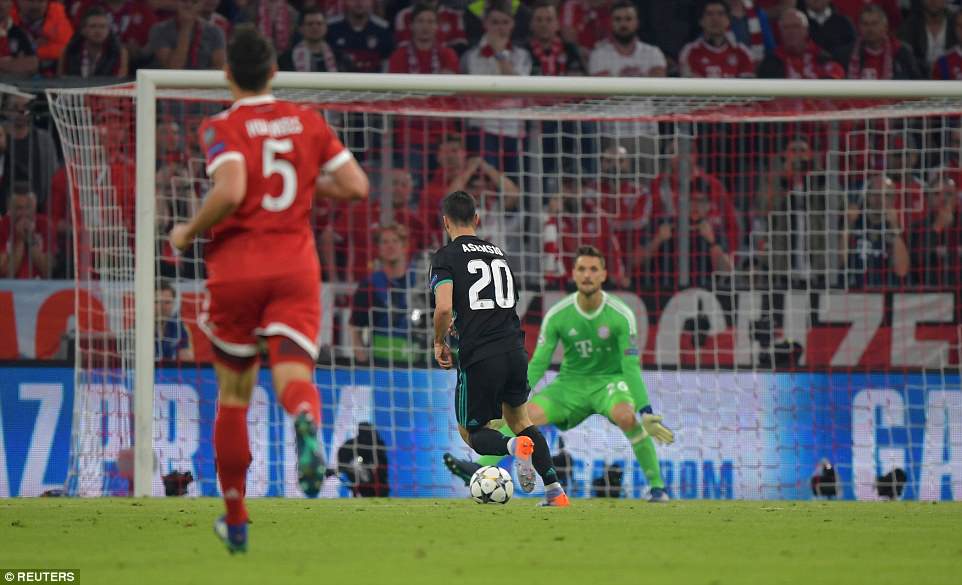 Rafinha’s square ball across the back four proved Bayern’s undoing, allowing Asensio to streak through to finish 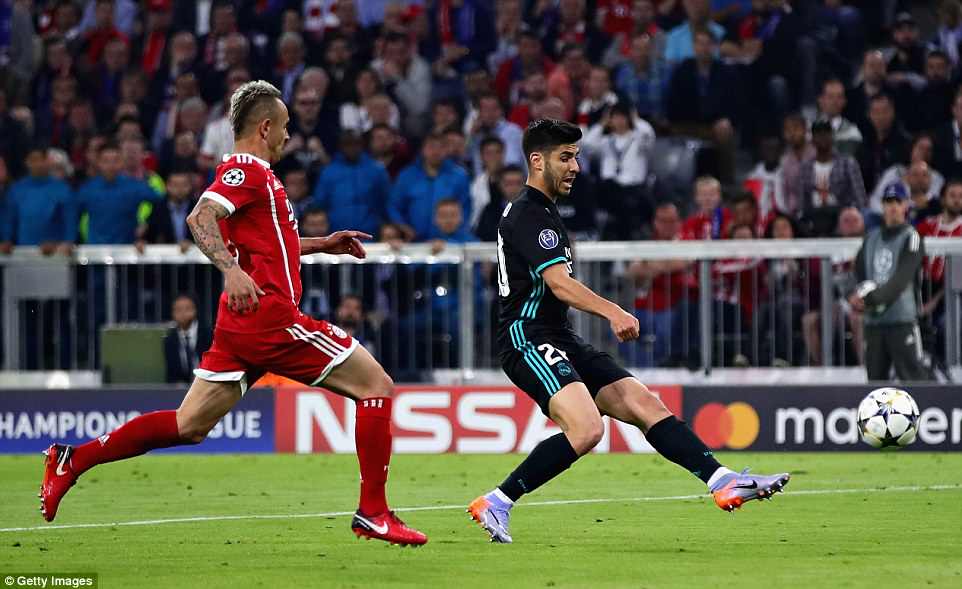 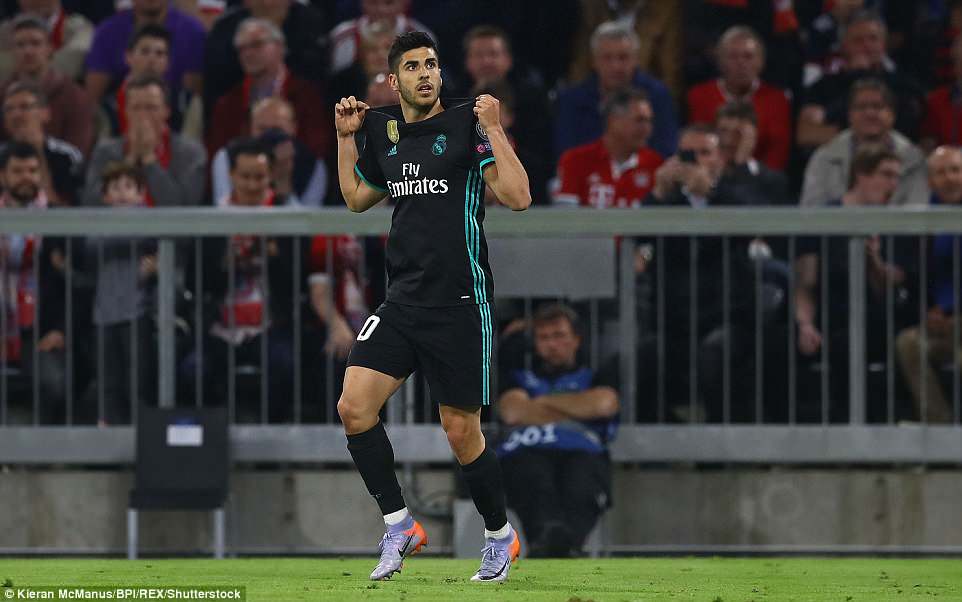 The opening goal was appropriately untidy. Marcelo chased after a ball Ronaldo had headed wide, failed to keep it in play and while he wandered off to reclaim it, goalkeeper Sven Ulreich had the presence of mind to collect a new one and send it into play.

The Brazilian defender was ambling back as Bayern built a rapier move down the right flank. It concluded with James measuring a pass which Joshua Kimmich fired beyond Navas, who should have done better.

The Germans were just as feckless when the equaliser went in, moments before the break. Ronaldo made to bicycle-kick a ball and the entire home defence seemed transfixed by his presence as the ball ran on to Marcelo, who fired in from the edge of the area.

Into the second half and Bayern’s Rafinha committed another cardinal sin, playing a loose ball in central midfield directly to substitute Marco Asensio, who exchanged passes with Lucas Vazquez and clipped the return ball over Ulreich. Jupp Heynckes’s side missed a raft of further chances. ‘We weren’t clinical enough,’ the manager said.

Their hopes were extinguished when Lewandowski, through on goal, tried a Salah clip but got his angles wrong. There was something quite fitting about that. 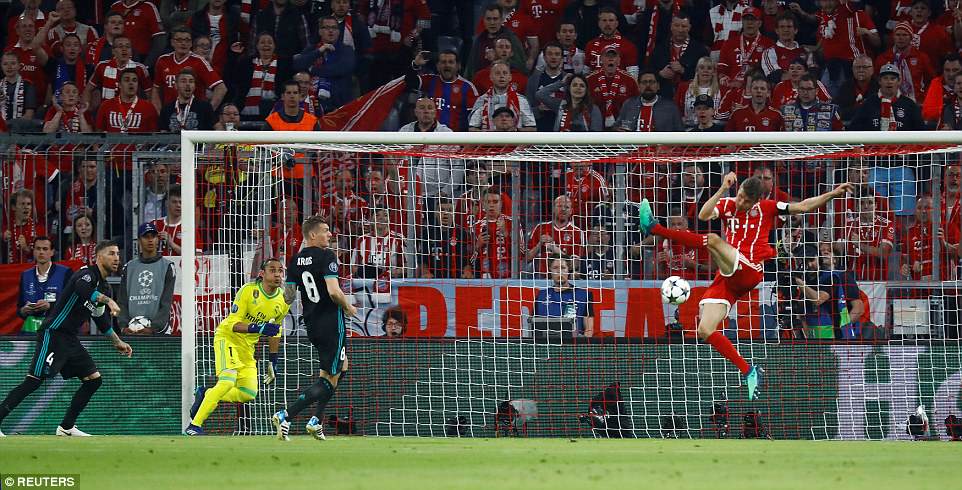 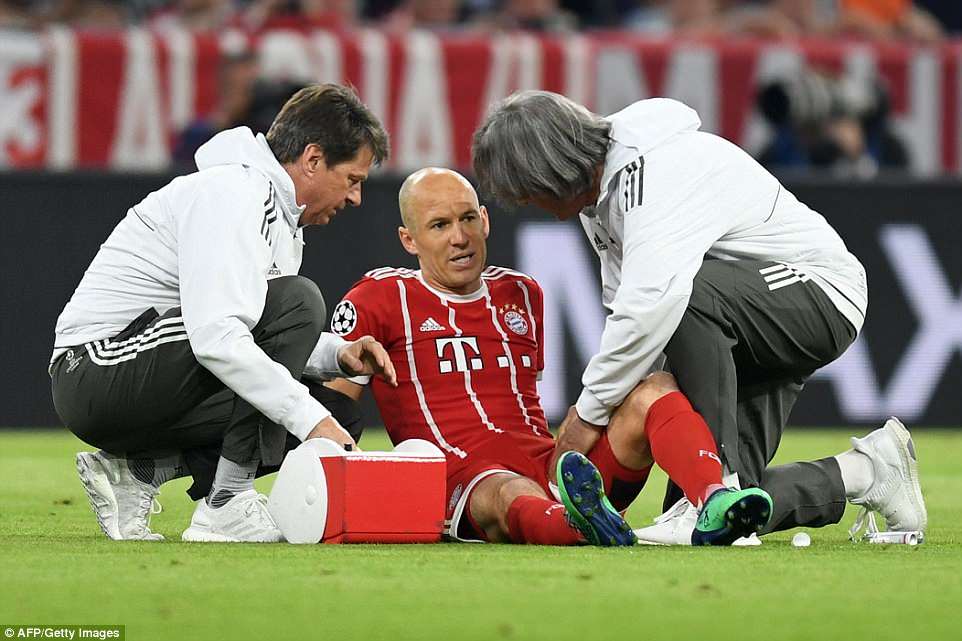 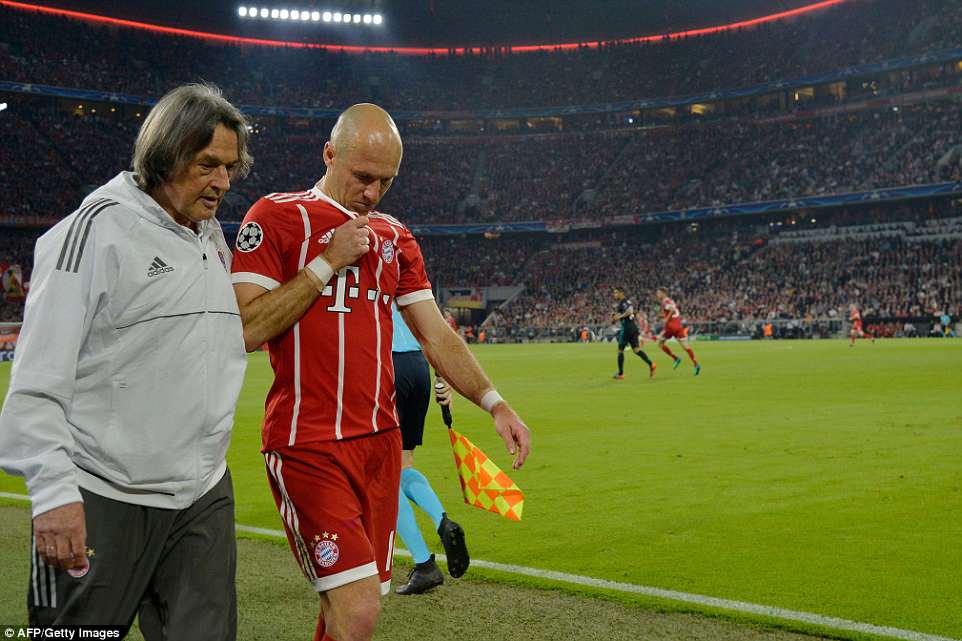 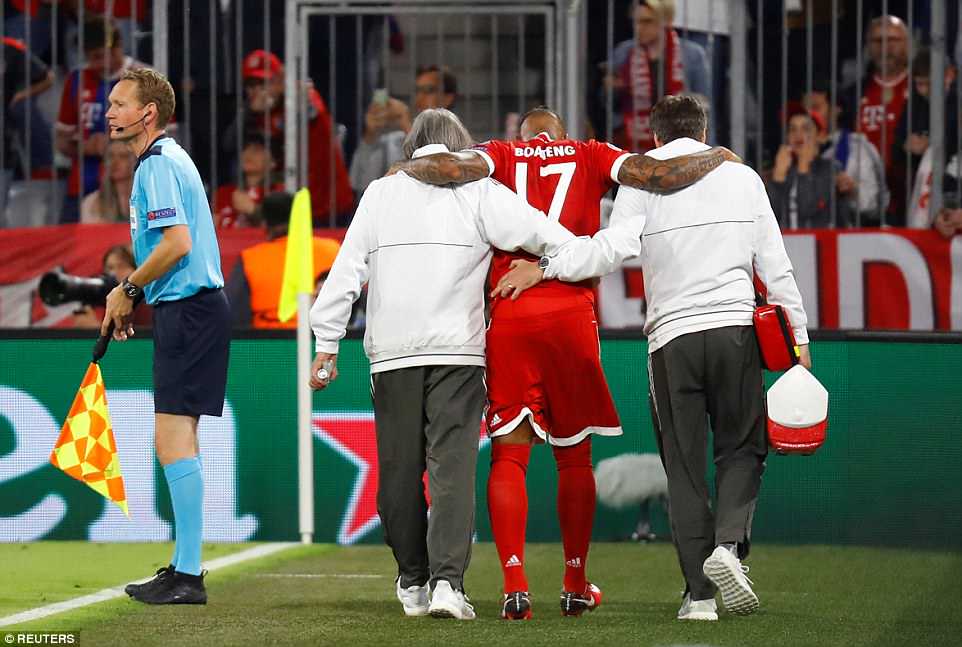 Just after half an hour, Bayern suffered further injury woe when Jerome Boateng had to be replaced with a hamstring problem 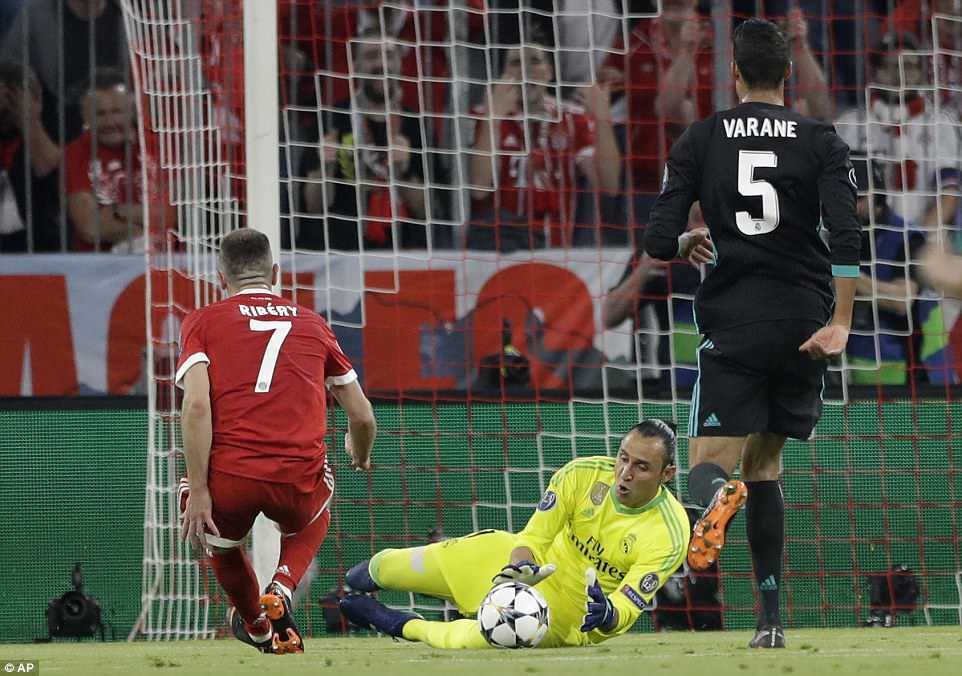 Franck Ribery had a brilliant opportunity to make it 2-0, however he miscontrolled when clean through and Navas gathered 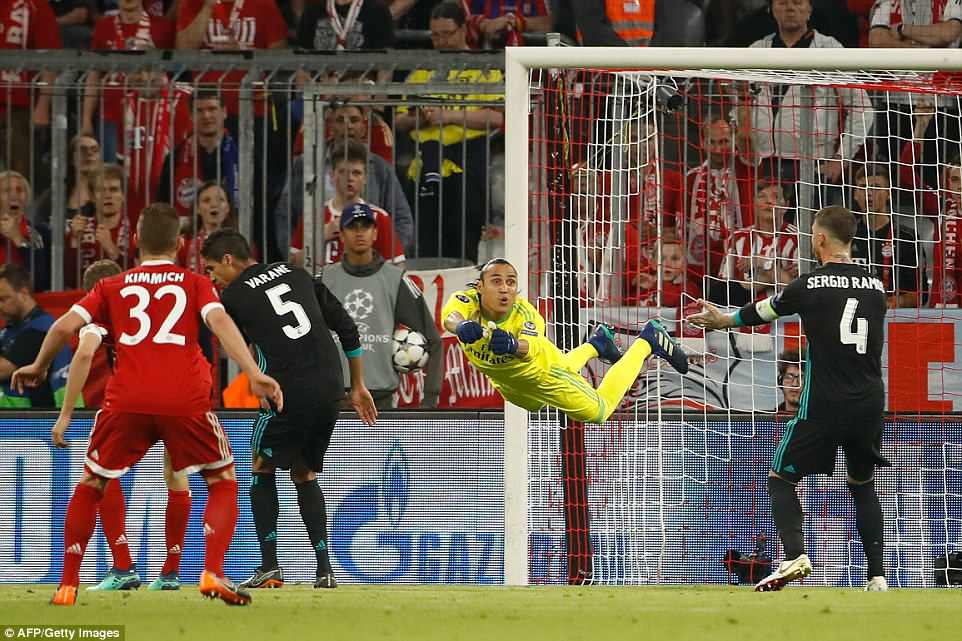 Navas looked nervous in the early stages, coming flying out to punch away a cross which was at a good height for a catch 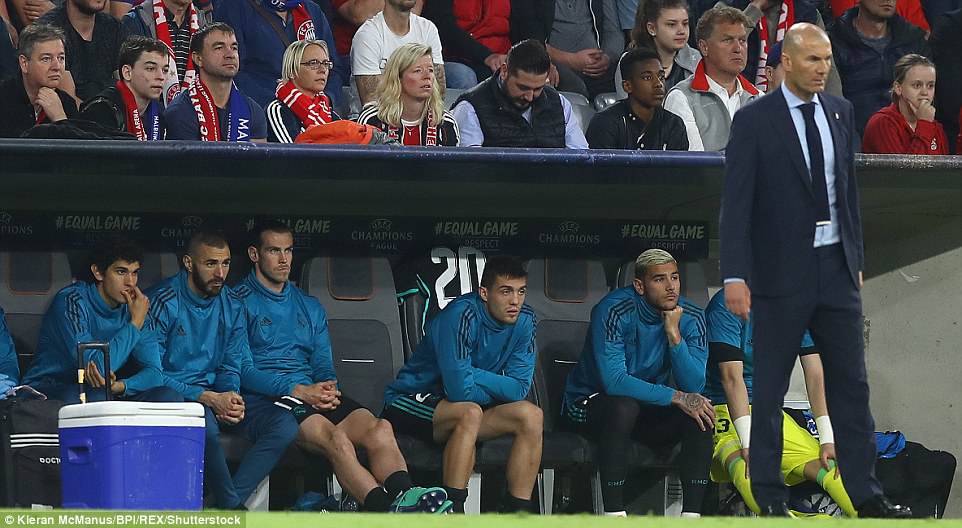 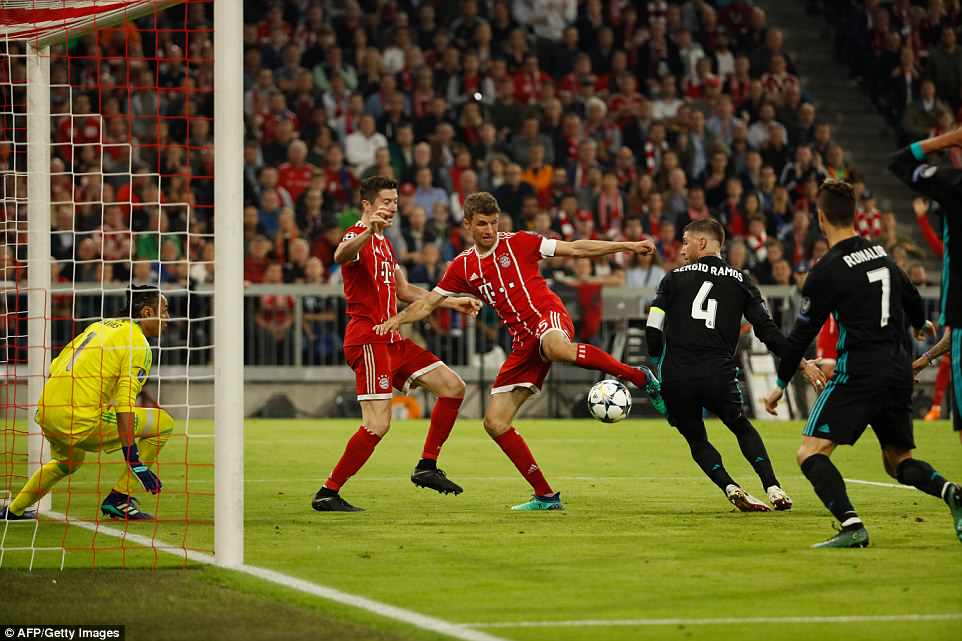 Muller missed another golden chance, getting tangled with Lewandowski when he could have tapped in from six yards 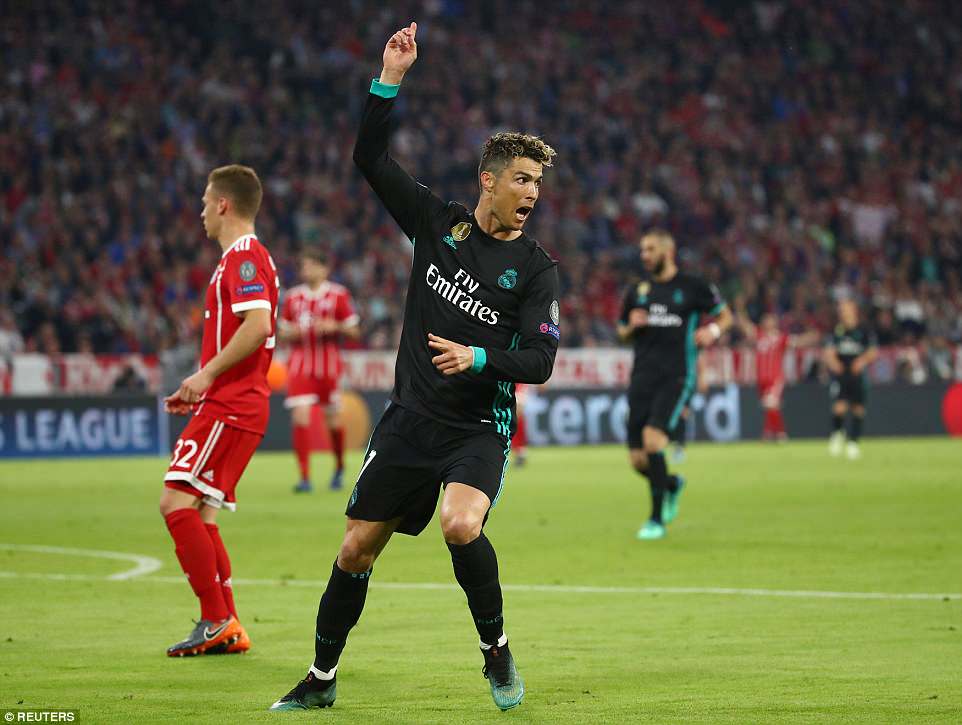 Cristiano Ronaldo struggled to get into the game – he thought he scored in the second half, but it was ruled out for handball