Bayern Munich spurned a hatful of chances in their 2-1 home loss to Real Madrid on Wednesday evening but Jupp Heynckes insists the fact they created so many opportunities shows the Spaniards are vulnerable.

Bayern should have been several goals to the good in the first half of the Champions League semi-final first leg, with Thomas Muller, Robert Lewandowski, Mats Hummels and Franck Ribery all coming close.

But the Germans were let down by some sloppy finishing that allowed defending champions Real to escape with a win and left Bayern in danger of being eliminated from the competition by a Spanish club for a fifth straight season.

‘We are not giving up,’ said Heynckes, who led Bayern to a treble in 2013. ‘When you create so many chances against a team like Real then this is also an indication that the opponent is vulnerable.

‘We have nothing to lose and we will be play freely. Maybe more so than in the first leg because our game was not as fluid as we would have liked.’

Bayern suffered early setbacks with injuries to Arjen Robben and Jerome Boateng but kept penetrating the Real defence seemingly at will in the opening 45 minutes, with the Spanish defenders struggling with the speed of Ribery and Lewandowski. 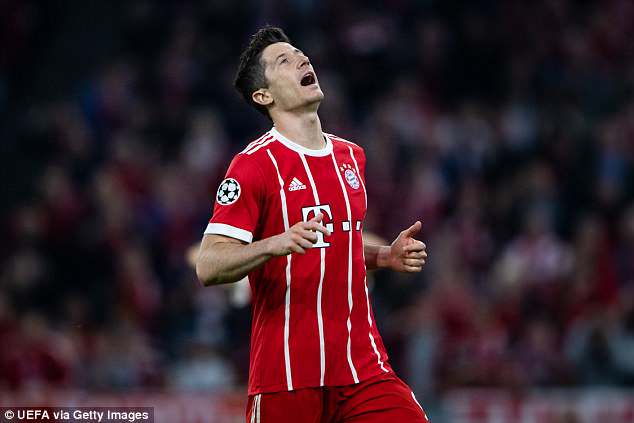 But instead of adding to Joshua Kimmich’s 28th-minute opener, they conceded an equaliser a minute from halftime through Marcelo’s well-taken volley.

A defensive blunder by Rafinha then allowed Real to complete the comeback and leaves Bayern needing a win in Madrid next week to advance to the final.

‘I am not blaming anyone but our defensive operation in both their goals was very bad,’ Heynckes said. ‘Our finishing was also not good. We were not as efficient as usual.’ Bayern had been near flawless in 2018, having scored 69 goals in their 20 matches in all competitions until Wednesday.

Heynckes had won his previous 12 consecutive Champions League matches while Bayern had lost just once in their last 22 home games in the competition going into Wednesday’s encounter.

That one defeat, however, was to Real in last year’s quarter-finals.

‘At the end of the day it is 2-1 for Real and we did not do ourselves any favours,’ said Bayern captain Muller. ‘How they (Real) did it is their thing but it shows that there is still a lot possible in the return leg.’