UEFA has opened disciplinary proceedings against Bayern Munich after its fans vented their frustration about ticket prices for the side’s Champions League game at Anderlecht.

The fans held banners during Wednesday’s game saying, ‘Are your necks not full? Is your greed now finally satisfied?’

UEFA said Thursday it was charging Bayern with two alleged offenses – an ‘illicit banner’ and the ‘throwing of objects,’ with the case to be dealt with by its ethics and disciplinary body on December 7.

A Bayern fan group, Club Nr. 12, issued a statement on the day of the game saying Anderlecht had made 85 per cent of the tickets available to the German club’s fans priced at €100 (£89).

‘Even by the standards of the generally high-priced Champions League, this represents a new dimension for a first-round game,’ said the statement, which thanked Bayern for supplementing the tickets so fans had could pay 70 euros (£62).

Many Bayern fans avoided the trip to Brussels altogether, while 91 per cent of more than 2,500 Club Nr. 12 members said in a survey that ticket prices were ‘completely unacceptable.’

Anderlecht spokesman David Steegen said that Bayern fans were charged ‘exactly the same price’ as home fans who bought single tickets to the game. He said fans who bought a three-game Champions League bundle were offered a reduction. 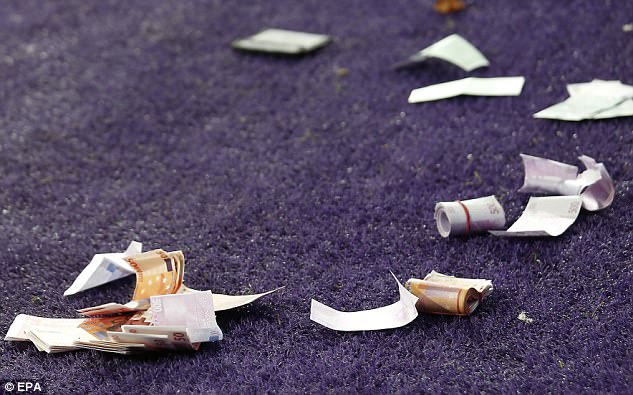