A bed and breakfast has a sign on its front door saying ‘Women Are Not Welcome’ after its owner branded them ‘air heads’ who should not be allowed to vote.

John Dixon Hart was fined in July after falsely advertising Minster Garth Guest House in Hull, East Yorkshireas a four star location – despite bloodstains on the walls, mouse droppings in the beds and mud in the fridge.

Now the married father-of-two has put the deterrent message on the front door of his establishment, admitting he ‘just doesn’t like women’ and refuses to speak to them. 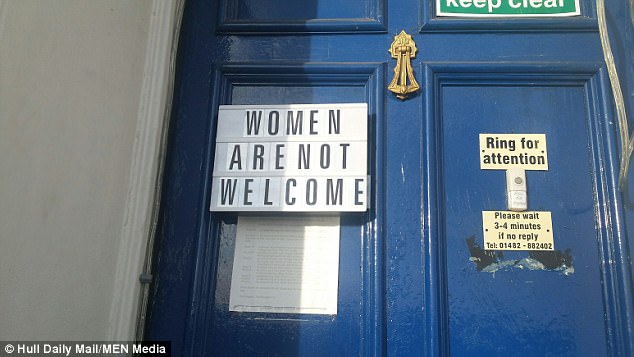 The married father-of-two has put the message on the front door, after admitting he ‘just doesn’t like women’ and refuses to speak to them

John Dixon Hart has been outspoken in his views about members of the opposite sex.

Here are some of his quotes about women:

‘I don’t really like women. I just don’t speak to them or look at them.

‘Theresa May, the Prime Minister, should be at home behind the kitchen sink, she has not got a clue.

‘I hate that Pankhurst woman and all those suffragettes, I just hate the fact that women vote.’

‘I suppose they can drive a little, they are not very good drivers.’

‘They are air heads, they are thinking about a million things at once.’

The bed and breakfast has received some 295 Trip Advisor reviews – 198 of which rate the guest house as ‘terrible.’

But the 53-year-old insists there is nothing wrong with the sign at his Keldgate B&B.

He said: ‘I can do what I like. I am sure if I said ‘no women allowed’ that would be illegal but you can say ‘women are not welcome’.’

He has no idea what his guests think about the sign – nor does he care.

He said: ‘I don’t really like women. I just don’t speak to them or look at them.

‘I believe there’s one staying at the moment. I have no idea what she thinks (about the sign), I have not spoken to her about it.’

Mr Hart said he is ‘old fashioned’ in his thinking and accepts he is ‘slightly biased against women.

‘Theresa May, the Prime Minister, should be at home behind the kitchen sink, she has not got a clue.

‘I hate that Pankhurst woman and all those suffragettes, I just hate the fact that women vote.

‘I suppose they can drive a little, they are not very good drivers.

‘They are air heads, they are thinking about a million things at once.’

He has previously put up a ‘Bates Motel’ sign at his guest house, in a reference to an American psychological horror drama TV series. 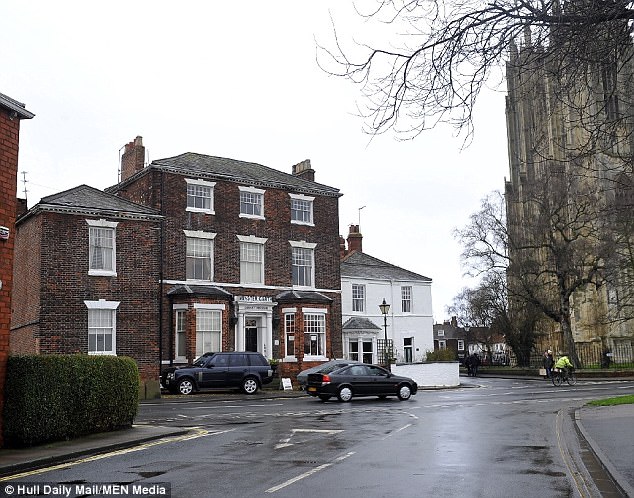 He said: ‘The sign gets changed fairly regularly. I’ve had Bates Motel on it before.’

Mr Hart has no problem about being compared to Basil Fawlty, the eccentric hotelier played by John Cleese in the classic TV sitcom Fawlty Towers: ‘I try my best to make it an entertaining experience. Fawlty Towers?

‘That’s no problem for me. I love John Cleese, I think he’s brilliant.

‘I run a lovely place. I try my hardest but I drink a lot in the evenings. I never drink during the day.’

He admits he may have put up the Women Are Not Welcome sign after a few drinks but insists he remains ‘proud’ of the sign.

He said: ‘Even now I am quite proud of it, it’s sticking up two fingers to everyone. Churchill did that a lot.’

A woman who lives nearby was not surprised to see the sign on the door.

She said: ‘You almost expect it, this sort of thing goes on there.  I can’t imagine what it’s like staying there.’

A man who passed by was shocked, saying: ‘I think it’s appalling. It’s also very odd.’

One reviewer who stayed in 2013 wrote on Trip Advisor: ‘Nice hotel, strange owner’, adding: ‘We were woken every morning at five o’clock by loud music being played by the owner and banging about, he had no consideration for his guests and to top that upon check out we asked for a receipt and he said he had better things to do with his time then to go on his computer and print a receipt, he then had the nerve to ask for an extra tenner for a receipt.

‘Of course we refused but very angry with his attitude, a very strange man and will never stay again.’

Another reviewer wrote: ‘This hotel is in need of some cash and tlc. The room was cramped and had random things in, such as a knife block with one carving knife in, a roll of kitchen roll.’

But Mr Dixon Hart hit back at this review, writing: ‘This is a distorted and unrepresentative review from a budget guest, staying in a standard room on the second floor. This guest paid less than the normal rate and expected more than she paid for and because of that, she has imagined, even made up negative stories.’

When another reviewer rated the B&B as ‘terrible’, the owner hit back: ‘This negative review is a gross over exaggeration. To say one’s weekend is a total disappointment because of a few minor problem’s with accommodation is typical of the would be travel critics who produce such drivel for this site.

‘I imagine this persons problems were more to do with the fact that other members of her family were lucky enough to be given our superior deluxe Room 5 and she was jealous and bitter about it, so decided to make out the room and general service were below par.

‘Complaining about it and saying it is odd, just exemplifies how a budding travel critic looks for faults when none really exist. Enough said.’