The BBC now lets you restart its shows mid-broadcast with the touch of a button.

Pressing the green button on your TV’s remote control will now start your current programme from the beginning via your smart TV’s iPlayer app.

Users must have a connected smart TV to use the feature, which is available now across the broadcaster’s UK channels, including BBC One and BBC Two.

The update is part of an ongoing push by the organisation to reinvent itself for a ‘new generation’, as millennials increasingly opt to use on-demand services offered by companies like YouTube or Netflix over the BBC’s traditional TV offerings.

The BBC now lets you restart its shows mid-broadcast with the press of a button. When viewers switch over to a BBC channel a small pop-up now appears on screen prompting viewers to restart the programme via the green button (top right)

The BBC’s so-called ‘live restart’ feature is already available on the iPlayer TV and web app, but the update marks the first time broadcast viewers will have access to it.

The broadcaster said that more than half of people watching BBC iPlayer live on TVs already use live restart.

Dan Taylor-Watt, head of BBC iPlayer, said: ‘Live restart is one of BBC iPlayer’s most valued features, and we’ve now made it even easier to access from our broadcast TV channels.

‘We’re hoping pressing the green button to restart will become a natural part of watching TV, much as pressing the red button has for millions of people each week.’

When viewers switch over to a BBC channel a small pop-up now appears on screen prompting viewers to restart the programme.

When you press the green button, the TV instantly loads BBC iPlayer and plays the programme from the start.

The new feature is available now across BBC One and BBC One HD, BBC Two and BBC Two HD, BBC Four, and will be rolled out to BBC Four HD in the future.

It forms part of the BBC’s ongoing strategy to entice more young viewers to its services as its popularity among millennials dwindles. 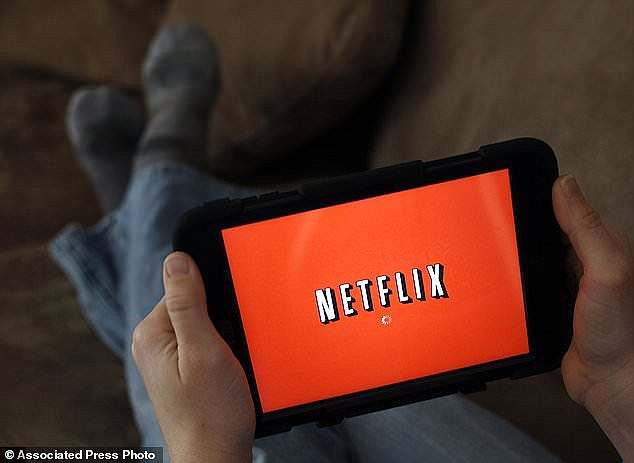 The update is part of an ongoing push by the organisation to reinvent itself for a ‘new generation’, as millennials increasingly opt to use on-demand services offered by companies like YouTube or Netflix over the BBC’s traditional TV offerings (stock image)

It was revealed in January that streaming giant Netflix had become more popular than iPlayer in Britain for the first time – despite its monthly charges.

The BBC offered 40 boxsets over the Christmas period, including popular shows Peaky Blinders, Miranda and both series of Planet Earth and Blue Planet.

It also introduced mandatory sign-in in 2017 to improve iPlayer’s personalisation and programming recommendations.

But the organisation’s efforts failed to boost its share of Britain’s viewing figures, with its average daily cut dropping from 2.07 per cent in 2016 to 1.99 per cent last year.

Netflix saw a boost in its share in 2017, rising to 2.91 per cent up from 2.12 per cent the previous year, according to figures seen by Broadcast.

This means the premium subscription service was watched more on average than iPlayer for the first time.

The devices accurately measure when the iPlayer and Netflix apps are loaded, and send the anonymous data back to Freesat.

Experts at Freesat suggested that Netflix’s rising share of Britain’s viewing figures may be driven by its user-base ‘binge-watching’ several episodes of shows in a row.

WHAT WERE THE BBC IPLAYER 4K HDR GLITCHES DURING THE WORLD CUP?

The most common complaints were that the video lagged behind the audio with constant buffering.

The iPlayer stream also seemed a little behind on live coverage so viewers were watching after everyone else — with some complaining of delays of more than a minute.

According to Trusted Reviews, who carried out a poll on 600 readers, 55 per cent experienced streaming issues.

‘One of its aims is to gather feedback so we can improve the experience for audiences, which we’re already doing based on what we’ve seen so far’, a BBC spokesperson said.

The main reason people found the coverage slow is that it requires extremely fast internet connection, which many people in the UK still do not have.

‘BBC UHD World Cup coverage looks seriously peng but I can’t watch it with the minute plus delay on the live coverage’, he tweeted.

Others also said the picture appeared too dark and that sounds cut in and out.

‘I have found the UHD transmission too dark. On normal TV (SD and HD) and iPlayer (HD) colours are vibrant’, wrote Twitter user Alloqui Strix.