This is the most immense and silent world imaginable and, therefore, not the most obvious place in which to make a radio programme.

But that didn’t stop us.

If you fly to Sisimiut, on the west coast of Greenland, and walk for two days eastwards along the Arctic Circle Trail — not so much a footpath as a series of cairns and occasional hunters’ huts — you will come to a lake cupped in a high valley like an amphitheatre.

If you fly to Sisimiut, on the west coast of Greenland, and walk for two days eastwards along the Arctic Circle Trail — not so much a footpath as a series of cairns and occasional hunters’ huts — you will come to a lake cupped in a high valley like an amphitheatre. Pictured: Andy Fell (left) and Horatio Clare

Climb up, and sprawled before you is a vast, wild world of mountains. They rise and fall like a frozen maelstrom, a silent storm of snow-veined peaks stretching across the horizon.

I gasped, then desperately tried to control my breathing. I was wearing a microphone and it was picking up everything around me.

A little way behind me, Andy Fell, our sound recordist, carried a huge pack with more microphones sprouting out of it: he was recording seven tracks of high-definition audio.

Although I had done a great deal of research and reading on Greenland, in moments like this my job was to make no noise whatsoever. 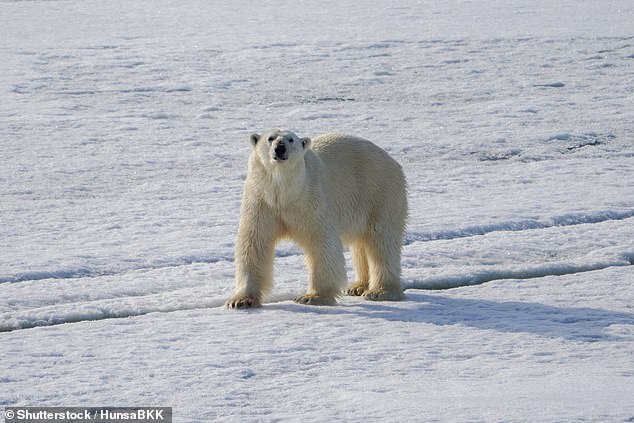 It is a proper adventure. We were all set to go when news came that a polar bear had been spotted on our route (stock image)

We were in the middle of creating Greenland: An Arctic Sound Walk, a series of three radio programmes, each more than an hour long, which will be broadcast over Christmas on BBC Radio 3. They are the story of a walk through a mighty wilderness.

Forget the torrential splatter of news, gossip, music, documentaries, commentary and comedy that comprises most broadcasting. This will be ‘Slow Radio’, and you will need plenty of time, quiet (or a good pair of headphones) and a readiness to enter another world.

The Slow movement comes from Scandinavia and Italy, embracing everything from cooking to television. The Slow Food movement, born towards the end of the Eighties, is a rejection of industrialised food culture and a riposte to the hurry that dominates so much of our lives.

In Italy (of course), a Slow meal demands organic ingredients, lovingly prepared, cooked for hours, and eaten — you guessed it — very slowly, with friends and conversation.

Last year, we made a Sound Walk in the Black Forest, based on the idea of winter wandering (stock image)

Slow TV is a Norwegian speciality. In 2012, the country’s version of the BBC broadcast the real-time journey of a canal boat chugging idly through the countryside, while a year later, another programme showed a wood fire burning for hours —and proved amazingly popular.

And so Slow Radio was born, pioneered by Radio 3 and the station’s controller, Alan Davey, who came up with the idea of Sound Walks back in 2017.

It may seem an odd way for a listener to spend their time: you can hear the sound of footsteps crossing the tundra, my panting breath as we climb fierce ridges, the rushing chuckle of streams and the shush of the wind blowing over icy moss and eerie pastures of lichen.

But this is the fourth time the station has asked me to do a Sound Walk. Our listeners simply love them.

Last year, we made a Sound Walk in the Black Forest, based on the idea of winter wandering. The year before, we followed J. S. Bach’s 1705 walk across Germany.

Listeners said they found the programmes an antidote to the bombardment of distraction and noise that is the soundtrack to modern life. ‘Transporting’, ‘relaxing’ and ‘uplifting’, the comments said, and so we attempted the most ambitious Sound Walk yet: a mission into the wilds of Greenland. 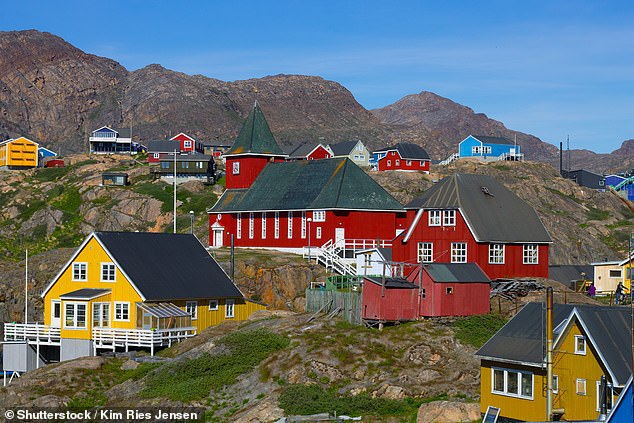 We were in the middle of creating Greenland: An Arctic Sound Walk, a series of three radio programmes, each more than an hour long, which will be broadcast over Christmas on BBC Radio 3. Pictured: Sisimiut (stock image)

It is a proper adventure. We were all set to go when news came that a polar bear had been spotted on our route.

I volunteered to carry a rifle, but the producer decided that a local qualified to use one would be a better idea, and so we were joined by Kaajinnguaq Kajussen, a gentle and taciturn hunter who clearly thought we were slightly mad. (He had no English, and I no Greenlandic, so we still do not know what he thought Andy Fell was doing, holding his microphone over streams and bushes.)

The Arctic Circle Trail crosses wild, trackless country. In Sisimiut, we were told of one hiker who disappeared three years ago, never to be seen again.

We were teased about the chances of meeting a Quivitok, who are wild, outcast men said to roam the wilderness scaring people. And everyone mentioned the polar bear.

Before we embarked on our expedition, I interviewed a drum dancer, Nuka Alice Lund, who performs traditional shamanic dances. In Greenland, the spirits of mountains, storms and animals are very much alive and a powerful part of the culture.

‘There are good and evil spirits in nature,’ said Nuka Alice.

‘But surely, nature is neutral?’ I asked. ‘It may be mighty, but isn’t it indifferent?’

‘No, there are evil spirits in it, too,’ she insisted, showing me the tattoos she wears for protection.

The trek tested us to the limit as we walked and climbed across frozen moss and rock for long, still days, staying in hunters’ tiny huts, living on energy bars and boil-in-the-bag rations.

It was utterly wonderful. We saw no evil spirits or polar bears, but we certainly met the uncanny. 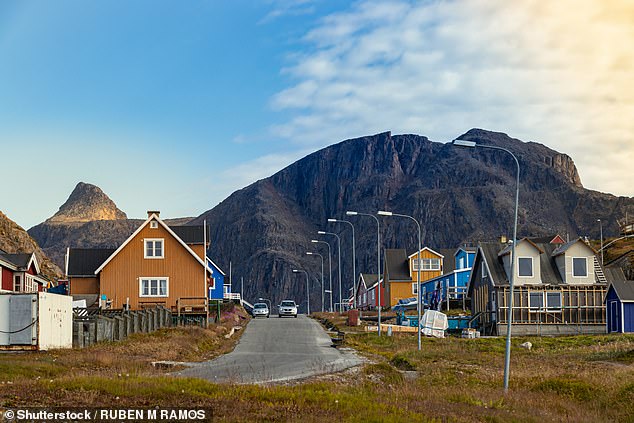 Listeners said they found the programmes an antidote to the bombardment of distraction and noise that is the soundtrack to modern life. Pictured: Sisimiut (stock image)

At night, the Northern Lights arched over the horizons in weirdly twisting tentacles, shimmering in luminous green.

We crossed high passes in freezing winds, climbed rough cliffs and twisted down through valleys so remote and still they seemed to be watching and listening to us.

The programmes also contain music, the story of our adventure, and accounts of the history, present and future of Greenland — but the producer, Jeremy Evans, gives as much space as possible to atmosphere, feeling and the not-quite silence of this near-silent world.

At one point, Andy was able to record the wing beats of a raven flying 50 metres away. And he caught the cries of skeins of Canada geese migrating high above us. They make a magical music as they gabble to each other — the cries of heaven’s hounds, as my boyhood hero, the nature writer Denys Watkins-Pitchford, described them.

After I had climbed up that amphitheatre ridge and faced the astounding vista, I waited for Andy to record the sounds of the wind and the scrape of stones under our boots, his microphones gathering an impression of the huge, wide space.

And then I began to describe the mountains and the thin lakes like fingers between them, the dark, still pools, the cliffs and savage descents. ‘Looking at this, you realise that there must be many places in this extraordinary view where no human being has ever stood,’ I said.

Greenland has been much in the news this year. American President Donald Trump was mocked for offering to buy it, but it was a logical idea and the third time, since 1867, that the U.S. has tried. 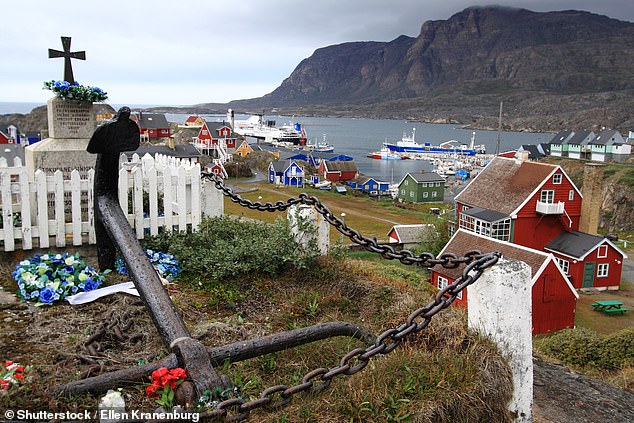 Without the treasures buried in Greenland, there would be no wind turbines, computers, jet engines or mobile phones. Pictured: Sisimiut (stock image)

In the rocks here are a quarter of the world’s rare earth metals, which are crucial to the manufacture of miniature and powerful magnets upon which modern life depends.

Without the treasures buried in Greenland, there would be no wind turbines, computers, jet engines or mobile phones.

And, if we do not get our environmental act together, the water locked up in the Greenland ice sheet has the potential to entirely change the world’s geography — raising sea levels by seven metres, washing away life as we know it.

If you are able to tune in and find the quiet to enter into the world of Slow Radio (which may be a challenge in the midst of Christmas), our hope is that you will be transported to a place of vast peace, animated by the twittering of snow buntings and the snuffles and whines of three runaway husky pups who decided to join us.

Perhaps it is appropriate that the real threat to human life is not some fiendish Bond villain with a bomb and a countdown clock, but the power of this immense and breathlessly beautiful place, where nature is still mysterious, still vast, still untamed and still, very often, silent.