A BBC floor manager was filmed having a hot flush on set at work to show the realities of coping with symptoms of the menopause when they occur during the working day.

Crew member Tracey Higgins is seen talking to camera during a break in filming the morning news show, explaining how it feels to try and work through a hot flush.

And Breakfast presenter Louise Minchin, 50, told colleagues Carol Kirkwood, Naga Munchetty and Sally Nugent that she knew she was going into menopause at 47 when she was hit by frequent extreme night-sweats.

BBC Floor Manager Tracey Higgins was filmed having a menopausal hot flush while on set at work; stepping outside the studio she talks viewers through how it feels as part of a BBC Breakfast campaign to get more people to discuss the life change 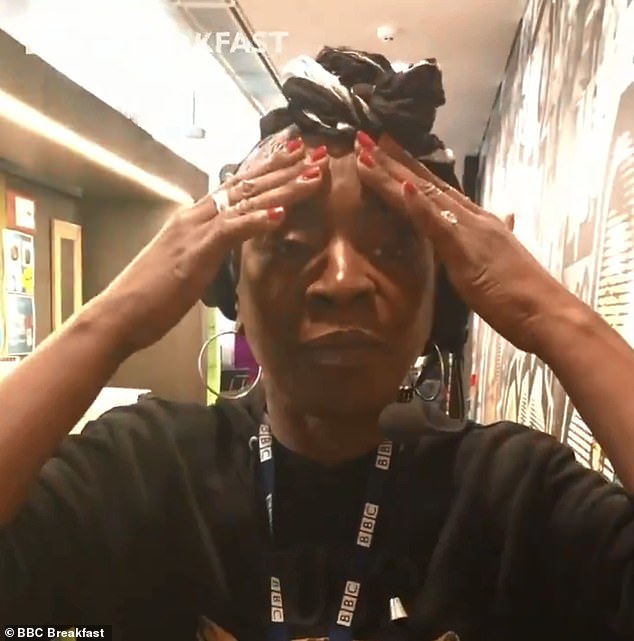 Holding her hands up to her head as she experiences the hot flush, a common symptom of menopause, Tracey tells the camera: ‘It’s happening, but I’ll carry on, that’s what I do’ 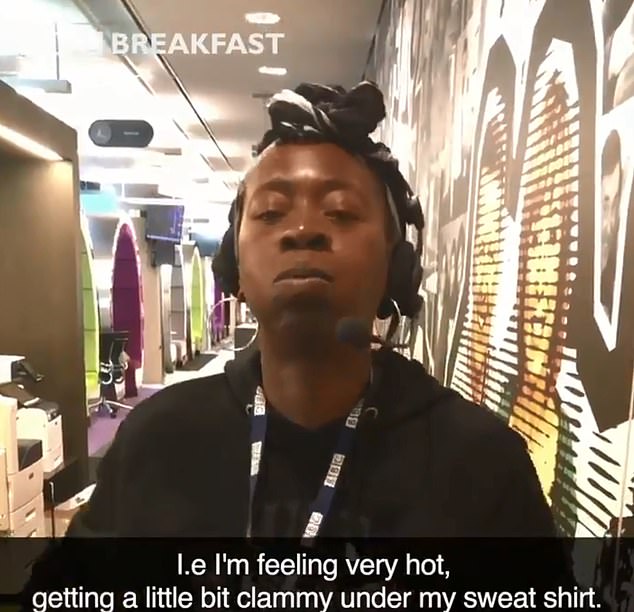 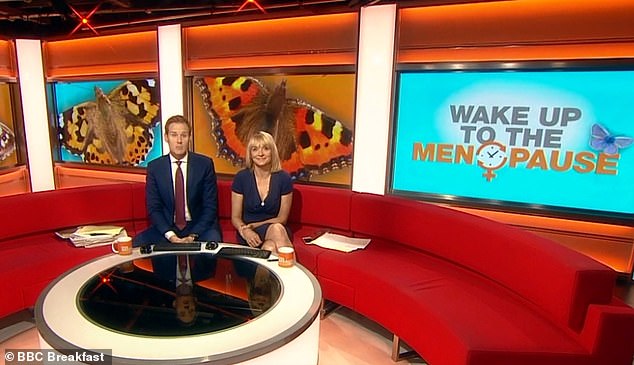 BBC Breakfast is discussing menopause this week, in a bid to get more people to talk about it, with presenter Louise Minchin, 50, opening up about her own experiences (pictured with Dan Walker, left) 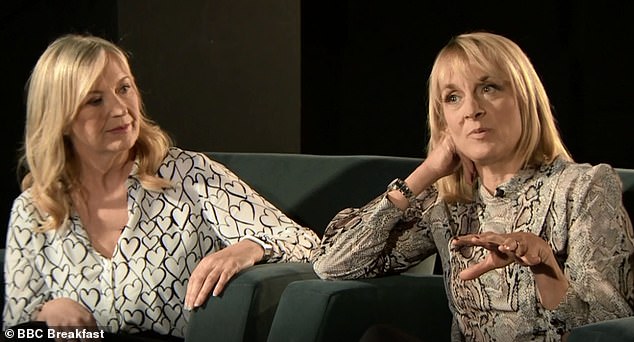 Minchin, pictured with weather presenter Carol Kirkwood, left, shared that she’d started the menopause three years ago and ‘it was kind of obvious’ because she began having extreme night-sweats

Tracey, a popular member of the BBC team, agreed to be filmed during her menopausal ‘episode’ as the show raises awareness on symptoms of it, encouraging people to talk more about the life change.

Wearing a black hoodie and visibly sweating, Tracey talks to the camera throughout her hot flush saying: ‘I’m getting very hot, a little clammy under my sweat-shirt.’

She’s seen saying ‘It’s happening’ before she raises her hands to her head and breathes through it. 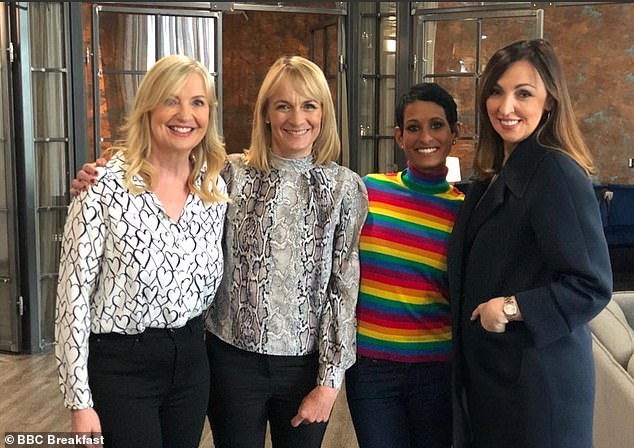 Second from left, Minchin, (pictured with co-presenters, left to right, Carol Kirkwood, Naga Munchetty and Sally Nugent) said she feels like she’s ‘run a marathon in Malaysia in a jungle six times a night’ when the sweats are at their worst 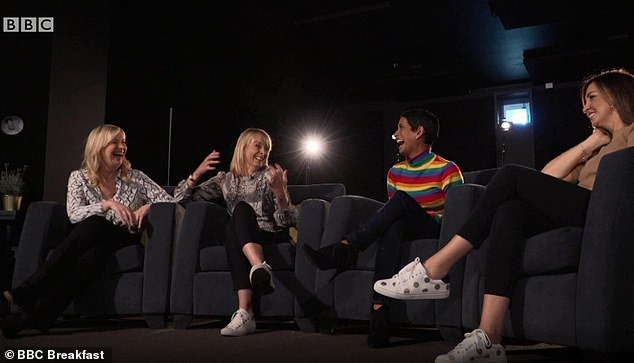 The four women discussed the menopause, with Sally Nugent, far right, saying she wished she’d discussed it with her late mother ‘because she would have gone through it’ 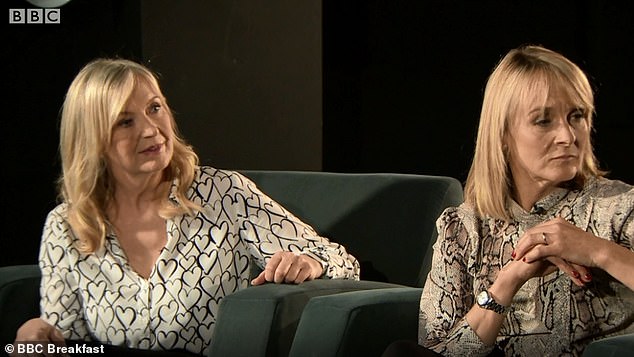 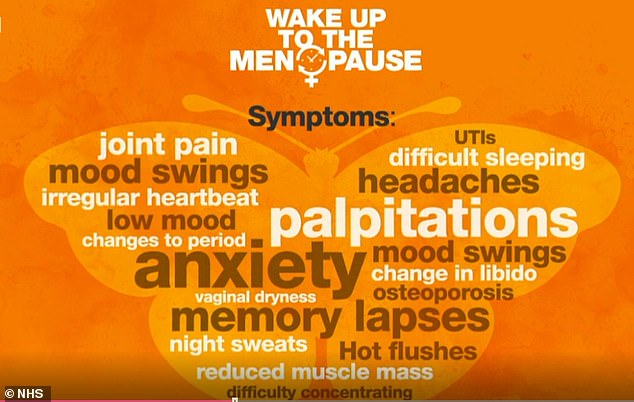 The menopause occurs when a woman stops having periods and can no longer fall pregnant naturally.

It is a natural part of ageing, which occurs in women between 45 and 55 years old.

However 1 in 100 women can experience menopause before the age of 40, which is known as peri-menopause, premature menopause or premature ovarian insufficiency.

According to NHS advice, symptoms can begin months or even years before your periods stop and last around four years after your last period.

Premature or early menopause can occur at any age, and in many cases, there’s no clear cause.

After looking at a list of potential symptoms of the menopause including palpitations, depression and loss of muscle mass, Minchin said: ‘I’ve ticked off more than half of those symptoms.’

Asked about how she knew she had definitely started the menopause, mother-of-two Minchin says: ‘It was kind of obvious. My main problem is night-sweats – and it’s like I’ve run a marathon in Malaysia in a jungle six times a night.’

‘I wish I’d had that opportunity to ask my mum about it because she would have gone through it – and I had no clue’.

Tracey then tells viewers she has to ‘carry on, because that’s what I do’ before heading back into the studio.

BBC Presenter Louise Minchin also offered a candid account of her own experiences of going through the menopause during a discussion with colleagues Carol Kirkwood, Naga Munchetty and Sally Nugent.