The BBC was today accused of taking an ‘unethical and disrespectful’ decision to change a rape victim’s quotes in her account of the ordeal – to avoid misgendering her trans attacker.

Corporation bosses replaced every reference the victim made to her male-born abuser as ‘he’ or ‘him’ to ‘they’ or ‘them’, as part of efforts to boost inclusive language.

It was claimed by some staff the decision was made following the input of members of its 14-strong central diversity team, which has had influence over the BBC’s style guide, which dictates that stories adopt an individual’s preferred pronouns, the Times reports.

However, it has been widely criticised by campaigners and senior journalists, who reportedly said editing in this way conflicted with the corporation’s responsibility in terms of accuracy and impartiality.

The BBC was today accused of taking an ‘unethical and disrespectful’ decision to change a rape victim’s quotes in her account of the ordeal – to avoid misgendering her trans attacker. Pictured: A Pride march in Durham at the weekend

The article carried the testimony of one rape victim, but the pronouns she used in recounting the ordeal were subsequently altered for publication on the BBC website

The article in question reported on claims from some lesbians that they have faced accusations of transphobia and threats of violence if they admit they are not attracted to trans women.

It carried the testimony of one rape victim, but the pronouns she used in recounting the ordeal were subsequently altered for publication on the BBC website.

The passage of quotes on the site reads: ‘[They] threatened to out me as a terf and risk my job if I refused to sleep with [them]. ‘I was too young to argue and had been brainwashed by queer theory so [they were] a ‘woman’ even if every fibre of my being was screaming throughout so I agreed to go home with [them]. [They] used physical force when I changed my mind upon seeing [their] penis and raped me.’

A terf is an acronym for trans-exclusionary radical feminist – a term which critics say has been used in an overly-broad fashion and in an insulting manner, alongside violent rhetoric.

Publication of the quotes in this way were said to have been the subject of heated debate, according to some sources.

Angela Wild, co-founder of lesbian campaign group Get The L Out, told the Times the BBC was wrong to amend the quotes.

She said: ‘It’s really unethical and disrespectful to the victim. It’s a form of gaslighting for a woman who has already been through sexual violence.’

The article was also subject to a number of complaints, with an open letter signed by more than 20,000 people – including some BBC employees – claiming the story was ‘deeply flawed’ and ‘incredibly dangerous’ for the trans community.

A BBC spokesperson said: ‘It’s routine to have editorial discussions about different stories. Our only intention when deciding on language is to make things as clear as possible for audiences.’

The corporation last year withdrew from a diversity scheme run by LGBT charity Stonewall due to the ‘risk of a perception of bias’.

Director of Nations Rhodri Talfan Davies said public trust that the BBC can approach ‘very complex areas’ with complete impartiality is ‘the absolute bedrock’ of its decision-making.

The organisation said in a statement last November that it would not be renewing its participation in the Stonewall Diversity Champions Programme but will continue to work with a range of organisations to support its LGBT staff.

Stonewall has been approached for comment on the BBC’s use of pronouns in this instance.

It comes as the BBC has said it was wrong for a Radio 4 programme to describe JK Rowling’s opinions on gender identity as ‘very unpopular.’

The broadcaster received a complaint about an episode of Front Row on Radio 4 which was aired on March 24.

During a discussion about cancel culture, presenter Tom Sutcliffe said the Harry Potter author ‘clearly has a very unpopular opinion regarding gender identity.’

They ruled there was ‘no conclusive evidence’ that those with a different view to Rowling ‘represented a majority.’

However, they dismissed complaints that it was wrong to include her in a discussion which also included sex offender R&B artist R Kelly, paedophile sculptor Eric Gill and Adolf Hitler. 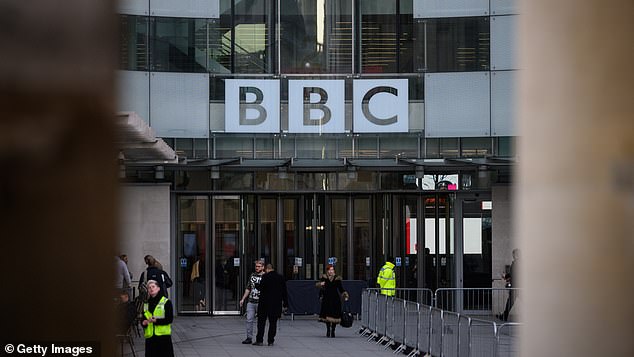 A BBC spokesperson said: ‘It’s routine to have editorial discussions about different stories. Our only intention when deciding on language is to make things as clear as possible for audiences’. Pictured: BBC Broadcasting House

Sutcliffe was interviewing the philosopher Professor Erich Hatala Matthes about his new book Drawing the Line which explores whether it is possible to separate art from the artist.

He asked: ‘And do you think there’s a major philosophical distinction between artists who have committed crimes, have been found guilty of crimes, and artists who simply have unpopular opinions?

‘You bring up the case of JK Rowling who clearly has a very unpopular opinion regarding gender identity and has, as a consequence of that, faced severe and serious criticism. Are those the same things?’

The BBC said it was fair to discuss Rowling in this context as she appeared in Matthes’s book and the presenter distinguished her from the likes of Hitler and R Kelly.

In its ruling, the ECU said: ‘In the ECU’s view it was legitimate to discuss JK Rowling, because she featured in the interviewee’s book (a fact reflected in Mr Sutcliffe’s question).

‘As to comparing her case with others, the ECU noted that Mr Sutcliffe did so in the context of distinguishing between expressing opinions (as JK Rowling had done) and committing criminal acts, and considered that this was neither harmful nor offensive.

‘The ECU agreed, however, that Mr Sutcliffe’s reference to a ‘very unpopular opinion’ was potentially misleading because, while it had clearly proved objectionable to some, there was no conclusive evidence that the objectors represented a majority.’

The ECU said it considered the matter resolved as the presenter had later acknowledged his mistake on air.

‘In the ECU’s judgement this was sufficient to resolve the issues of accuracy and impartiality raised by the complaint.’

Rowling, 56, has faced accusations of transphobia since publishing an essay on her website in 2020 in which she argued that gender identity should not be given priority over one’s biological sex.