The BBC was accused of making the gender pay row worse last night as its report into the affair recommended giving pay rises to more men than women.

The long-awaited review, branded a whitewash by critics, also found there was no evidence of ‘gender bias’ when it came to setting pay, despite an avalanche of complaints from female staff earning less than their male colleagues.

And the corporation tried to explain away pay discrepancies for men and women doing the same jobs by saying male presenters were often paid more for ‘non-gender-related reasons’ – for example, because they are better known or more experienced.

Yesterday, female BBC staff said the verdict flew in the face of their experiences, and had only stoked their anger further.

Woman’s Hour host Jane Garvey told Radio 4’s The World At One: ‘Without being overly cynical, I might venture to suggest that PwC has delivered the report that the BBC asked for.’

She told the Mirror: ‘They chose the scope, the methodology, they appointed PwC and the QC who looks at it.

‘I would question it’s independence -PwC has delivered the report the BBC asked for.’

BBC Women – a coalition of 170 female staff including Miss Garvey, Victoria Derbyshire and Today host Mishal Husain – had warned that the review of 800 news presenters was likely to be a whitewash.

The 43-page report – put together by management consultancy PwC – found:

But despite these findings, the PwC study concluded there was ‘no evidence of gender bias in pay decision-making’.

The corporation then said it would award pay rises to 188 staff after PwC concluded they were underpaid for the jobs they do – 98 were men and only 90 were women.

Last night, one well-known presenter said: ‘It’s extraordinary that we could have an equal pay review and end up giving more money to men.

‘How does that happen? The BBC has lost its grip on this issue. Lots of women were very angry and the review has only served to make them even angrier.’ 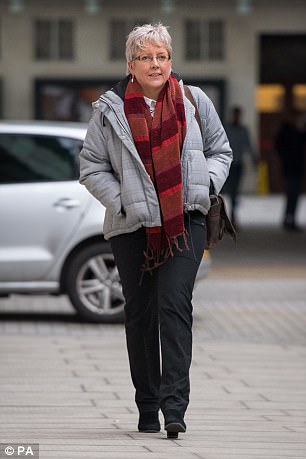 Another said: ‘Nothing is so bad that the BBC can’t make it worse. How can the BBC have gone looking for a way to resolve equal pay and end up giving pay rises to men? We believe this is a retrofit – a case of “let’s come up with a pay framework which justifies the status quo. Oh, and by the way a bunch of men will get pay rises”.’

BBC Women wrote to BBC boss Lord Hall ahead of its publication, complaining that the management consultancy firm had not spoken to staff, and presenters had not been allowed any input into the way the research was conducted.

Yesterday the group said the report was highly selective and focused only on news staff, so did not cover some of the BBC’s highest earners. ‘There has been no transparency on which individuals were included, or why.

The BBC has chosen who to compare with whom and what factors justify any gaps in pay,’ the group said.

The National Union of Journalists said the report exposed the ‘unchecked managerial discretion’ that has allowed the BBC’s ‘discriminatory pay culture to flourish’. It added that PwC’s verdict that there was no bias ‘flies in the face of reality’.

The NUJ is representing more than 120 BBC staff who have lodged formal grievances against the corporation because of equal pay issues. About 100 more are fighting their cases directly.

BBC insiders said female staff were ‘edging’ towards a major court battle if the BBC did not start paying them fairly. Experts have warned the claims could easily cost tens of millions of pounds, and that licence fee payers would end up paying for them.

Farce as BBC stars are pulled off air

Coverage of the BBC pay scandal descended into farce yesterday, as it pulled presenters off air and cancelled guests in order to meet its own impartiality rules.

Jane Garvey was banned from discussing BBC pay on Woman’s Hour because she was one of the founding members of BBC Women – a group of 170 female staff urging bosses to make pay equal.

She had been due to interview Sam Smethers, head of the equality campaign group The Fawcett Society, but they were both axed.

Instead Miss Garvey handed over to the BBC’s media correspondent Nick Higham. He said: ‘Reporting on the BBC about the BBC is wonderful. You [Miss Garvey] are not allowed to ask me questions about this because you have expressed views about gender pay in the past.’

Miss Garvey ended the segment with gritted teeth, saying: ‘On my script here it says: “Thank you, Nick.” That’s what I have to read.’

There appeared to be a different set of rules on Radio 4’s Today programme as Mishal Husain was allowed to conduct an interview about the row.

Miss Husain admitted that she was part of BBC Women before quizzing Damian Collins, chairman of the Commons committee that will grill BBC bosses today.

One well-known presenter, who is part of the BBC Women group, accused the corporation of launching a new pay framework simply as a ‘stalling tactic’ so it could stave off the legal battle.

BBC bosses, who are thought to have been picking their language carefully to avoid inflating the potential legal bill further, face a gruelling challenge today, as they are cross-examined by MPs on the digital, culture, media and sport select committee.

Lord Hall is due to appear, with deputy director Anne Bulford. They will give evidence after Carrie Gracie, the former BBC China editor who quit the post earlier this month in protest over the BBC’s ‘secretive and illegal’ pay culture.

Yesterday, Lord Hall admitted the BBC had overpaid some of its top news presenters – but insisted they needed to be well rewarded.

Lord Hall, who is paid £450,000 a year, said he had not taken a pay cut – despite twisting the arms of several highly paid male news presenters to do so.

Bosses at the BBC were yesterday branded out of touch after the broadcaster suggested capping pay for news presenters at £320,000.

The proposal would force some of its highest-paid news hosts to give up hundreds of thousands of pounds a year.

According to BBC News, the £320,000 cap would only apply to on-air staff working full-time. It could force news presenters such as News At Ten host Huw Edwards, Radio 4 hosts Eddie Mair and Andrew Marr to take pay cuts – on top of the ones they have already agreed.

But MPs lambasted executives for suggesting anyone should ever get paid so much for reading an autocue.

Tory MP Philip Davies said: ‘If the BBC think that is pay restraint, I would hate to see what they consider excessive pay. They clearly have too much money and are out of step with the many people across the country who struggle to pay the licence fee each year.’

Andrew Bridgen, another Conservative, said sarcastically: ‘The BBC news presenters will just have to struggle through on more than twice the salary of the Prime Minister. I am not sure how they will make ends meet.’