All the buzz about this year’s Strictly Come Dancing has centred on two women dancers – the first time the BBC1 hit show has featured same-sex pairings.

But last night, as the 18th series kicked off, the spotlight switched to the two female presenters’ pay.

The Mail on Sunday can reveal that Tess Daly and Claudia Winkleman are waltzing all the way to the bank with fees that are not included in the BBC’s list of its best-paid presenters – despite the licence-fee-funded broadcaster vowing transparency over its stars’ salaries.

Daly and Winkleman are each paid £350,000 to host the series but this is excluded from the list because Strictly is produced by the Corporation’s subsidiary, BBC Studios, which became its own company in 2018.

If Claudia’s Strictly fee was included – as well as about £150,000 for presenting BBC1’s The Best Home Cook, which is also made by an independent producer – she would be in third place on the list with about £800,000, just below Gary Lineker and Zoe Ball. 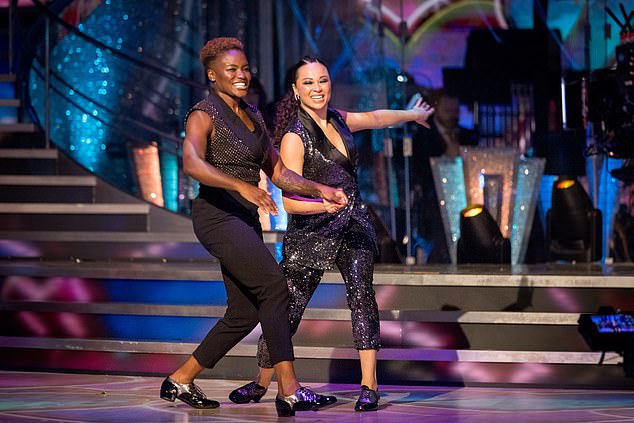 Viewers were introduced to this year’s celebrity and professional dancer couples, with the first ever same-sex pairing being former Olympic boxer Nicola Adams and Katya Jones

Winkleman is worth an estimated £9million and has recently written a bestselling book, Quite, which invites fans ‘into her world’.

Meanwhile, Daly has topped up her BBC wages with two lucrative endorsement deals – a bedding range with Next and another with health supplements company Wellwoman.

A Strictly source said: ‘The show is an absolute money-spinner for the both of them. 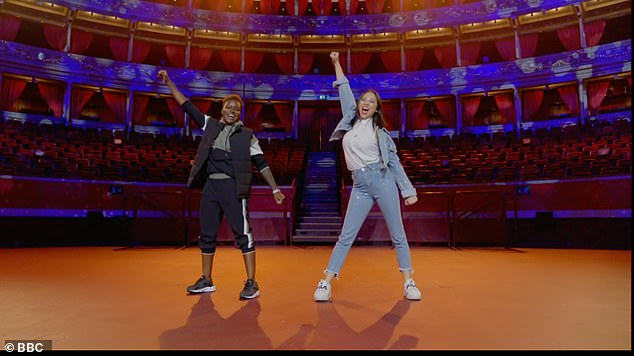 ‘Despite making a big fuss over openness about its stars’ salaries, there still seems to be a gaping loophole allowing bosses to avoid declaring the true sums by paying them through the commercial arm, BBC Studios.’

Last night, viewers were introduced to this year’s celebrity and professional dancer couples, with the first ever same-sex pairing being former Olympic boxer Nicola Adams and Katya Jones.

Jones, who two years ago was embroiled in a ‘Curse of Strictly’ scandal after she was caught kissing her partner Seann Walsh in a London street despite being married to fellow Strictly professional Neil Jones, beat the other female dancers to take on what they considered to be a coveted role.

P.S. WE’VE ALL SEEN THAT LOOK BEFORE, JACQUI!

Jacqui Smith rolled back the years as she joined pro Anton du Beke, left – recalling memories of when, in 2007, she was Home Secretary and got it in the neck for wearing a ‘barmaid’s low-cut’ to update MPs on terror attacks, right.

Last night she and Adams danced together for the first time as part of a group.

They will do their first dance alone, judged by the panel of Shirley Ballas, Motsi Mabuse and Craig Revel Horwood, next Saturday.

Adams said last night: ‘I’m super excited to be paired with Katya, I’m absolutely buzzing. Me and Katya just did a little bit of a dance routine out there and it felt really good, we were really in sync.

A little taster of what’s to come.’ Last year’s winner, Oti Mabuse, has been paired with comedian Bill Bailey.

Strictly bosses beat the odds to ensure the show went on this year despite Covid restrictions.

There will be only 12 partnerships this year – three fewer than usual – and the run will be just eight weeks rather than the usual 12.

BBC executives hope they will be able to invite a small cabaret-style audience for the live shows with the appropriate social distancing.

Bruno Tonioli will not be on the judging panel this year as he is starring in the US version of Strictly, Dancing With The Stars.