‘Stay with me!’ BBC newsreader suffers live TV blunder when she is forced to chase camera across the studio as it pans past her

A BBC camera caught that Friday feeling today when it panned across the studio forcing the newsreader to chase it.

Presenter Victoria Valentine took her spot for the news bulletin in the morning, only to find that when the camera moved to focus on her, it just kept going.

The newsreader, realising the camera was on the move, then darted across the studio to catch up with the shot.

The mishap left viewers in hysterics as they took to Twitter to praise Ms Valentine for her quick thinking.

The newsreader was presenting a segment on the World Economic Forum at Davos when the camera took on a mind of its own.

She began by addressing the audience: ‘We start in the Swiss ski resort of Davos.’ 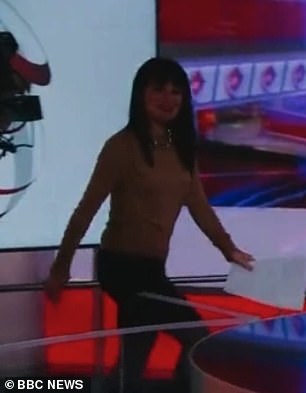 As she finished her sentence, she began to laugh as she realised the camera was on its own journey.

Turning to chase the camera, she said: ‘You know what? Stay – stay with me.

Victoria then took her seat in the centre of the studio before continuing to present a piece on Sir Keir Starmer at the summit.

After the camera had settled down, Victoria posted the clip on her Twitter account to laugh it off with some mountainous puns.

She wrote: ‘Unexpectedly off-piste today for a Davos story.

‘Thank you to the cool heads in the gallery this morning who make recoveries *almost* look like they were scripted all along.’

People who had watched the clip, or seen it live on TV, were quick to tell Victoria she had handled it professionally with a ‘smooth recovery’.

‘No one noticed,’ one viewer wrote.

Another said: ‘When it all goes to pot, just laugh and roll with it.’