The BBC has admitted it made a ‘mistake’ following accusations that a Question Time clip was cut in a way which edited out laughter directed at the Prime Minister.

The broadcaster said it had cut a clip of Boris Johnson on the BBC’s Question Time leaders’ special on Friday November 22 for a shorter package to be shown on Saturday’s lunchtime bulletin.

In a statement, the BBC accepted that the clip ‘didn’t reflect the full reaction to Boris Johnson’s answer’.

The full clip, which includes audible laughter, was shown in full on the BBC’s flagship News At 10 programme on the Friday evening.

However, thousands of people have shared a video of the shorter clip on social media, in which no laughter can be heard. The BBC said there was ‘absolutely no intention to mislead’.

In a statement released on Monday afternoon, the BBC News press team said: ‘This clip from the BBC’s Question Time special, which was played in full on the News at Ten on Friday evening and on other outlets, was shortened for timing reasons on Saturday’s lunchtime bulletin, to edit out a repetitious phrase from Boris Johnson.

‘However, in doing so we also edited out laughter from the audience. Although there was absolutely no intention to mislead, we accept that this was a mistake on our part, as it didn’t reflect the full reaction to Boris Johnson’s answer.

‘We did not alter the soundtrack or image in any way apart from this edit, contrary to some claims on social media.’ 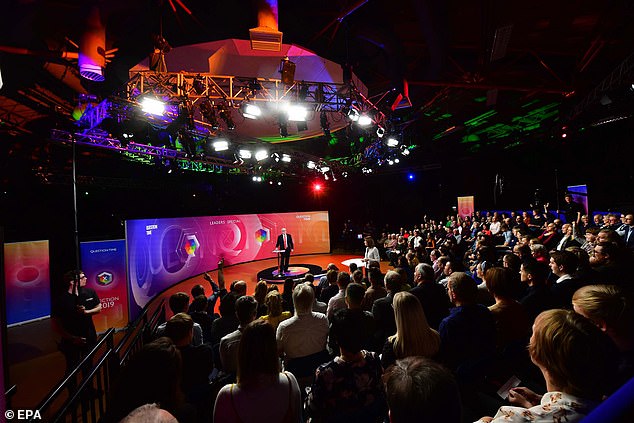 There was scoffing from the audience during the Question Time special, which also featured Corbyn (pictured on stage)

The independent regulator Ofcom confirmed that 46 people had complained about the clip as of 3pm on Monday.

Mr Johnson was taking part in a Question Time special in Sheffield which featured the leaders of the four main political parties and was hosted by Fiona Bruce.

During the programme, in which each leader was quizzed for half an hour by audience members, the Prime Minister refused to apologise over his use of language and defended Tory austerity in the programme.

The Tory PM was asked to apologise and admit he had personally contributed to ‘racist rhetoric’ during his journalistic work.

Mr Johnson said he ‘genuinely never intended to cause hurt or pain to anybody and that is my intention’.

But the audience scoffed when he added: ‘If you go through all my articles with a fine-tooth comb and take out individual phrases, there is no doubt that you can find things that can be made to seem offensive and of course I understand that.’

One junior doctor accused him of ‘lying to us’ as she challenged the Tories’ record on the NHS, while another voter questioned whether he could be trusted.

In his response, Mr Johnson was met with groans when he said the NHS’s demands could only be met when ‘we get Brexit done’.

He was also challenged over levels of child poverty and how many new hospitals the Tories were planning to build after the scheduled number dropped from 40 to six.

The other party leaders also faced a brutal televised grilling.

Labour leader Jeremy Corbyn was pushed on whether or not he would pick a side during another referendum, while Liberal Democrat leader Jo Swinson had to deny she was treating voters as ‘stupid’ over her plans to revoke Article 50.