A young man who was violently assaulted, stabbed and burnt by his abusive girlfriend has revealed the extent of his horrific injuries for the first time in a harrowing documentary.

Alex Skeel, 22, from Bedfordshire was just ‘days from death’ when police knocked on his door in June 2017, leading to an investigation that saw the mother of his two children jailed for more than seven years.

Jordan Worth was the first female in the UK to be convicted of controlling or coercive behaviour, along with GBH, and her former childhood sweetheart now hopes to spread the message that women can be perpetrators of domestic violence too.

Alex relives his horrific five-year ordeal in new BBC Three documentary Abused By My Girlfriend, which reveals in heartbreaking detail how he went from a carefree teenager to being hit, stabbed and burnt on a regular basis.

Alex Skeel was violently assaulted, stabbed and burnt by his ex-girlfriend Jordan Worth for years of their relationship 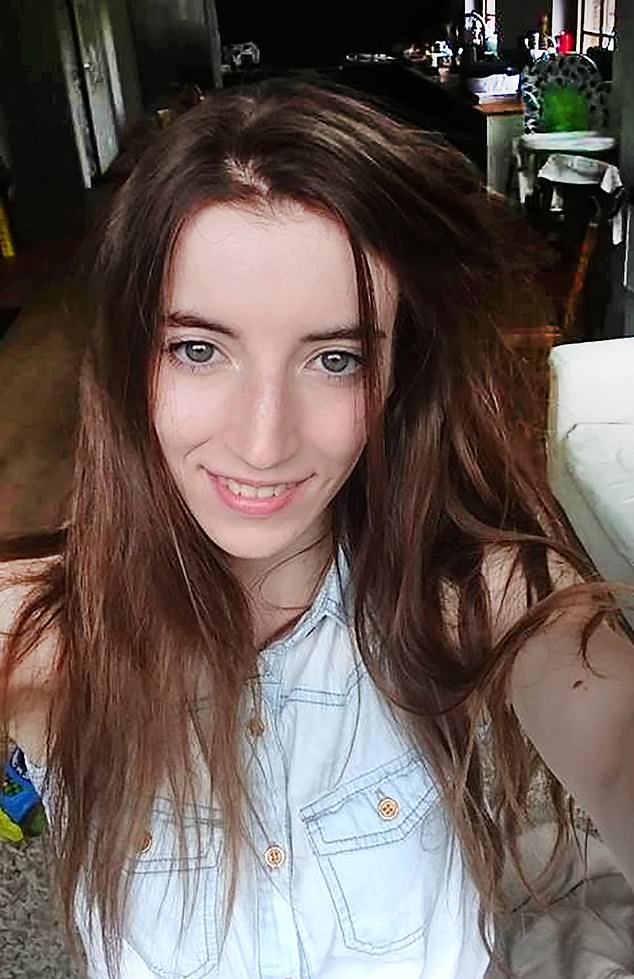 Jordan was jailed for seven and a half years for her campaign of abuse, at one point even denying him of food

Alex was a typical football-mad 16-year-old when he first met Jordan at a concert in June 2012 and soon became besotted with her.

‘She was very caring, confident, loving,’ he says of the aspiring teacher. ‘She just showed a real interest in me.’

Despite Alex’s friends describing Jordan as ‘delightful’ and her boyfriend as ‘quite smitten’, Alex’s mother Ged says it wasn’t long before her behaviour ‘started to change’.

‘The longer they were together, and as the relationship grew, the mind games started playing,’ she recalls. 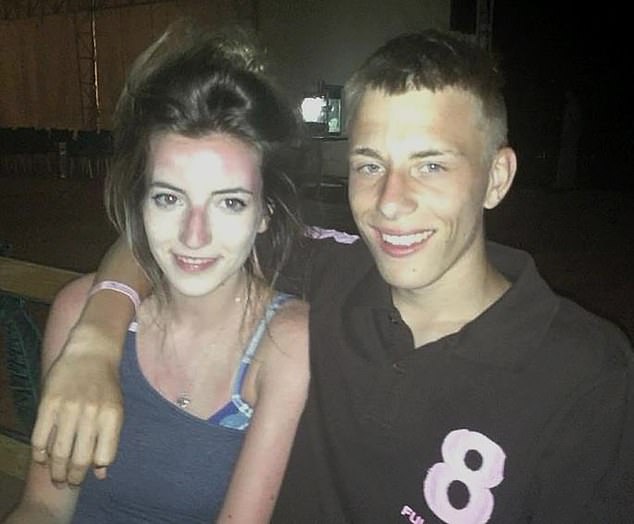 Alex says that the abuse started off in the form of small remarks about his clothing and hair and later became physical. Pictured: The couple at the beginning of their relationship 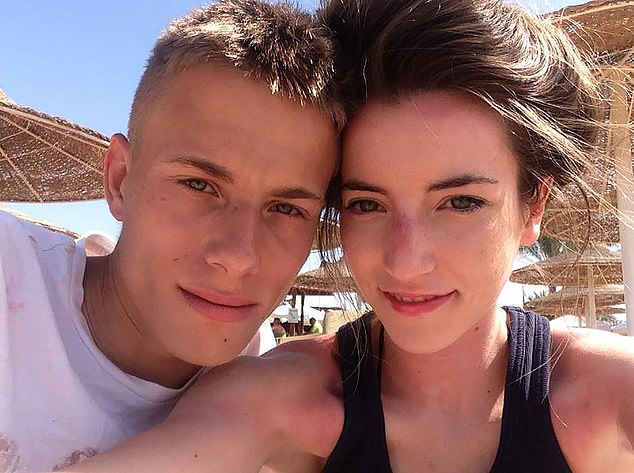 Jordan would boil a kettle and pour over her boyfriend as an act of torture, and he admits he became concerned for their two children’s safety

There was the time Alex’s family treated her to a night at the theatre in London, only for her to disappear from the hotel in the middle of the night, sparking a frantic search, before reappearing in the hotel lobby an hour later, ‘just laughing’.

Or the time she ruined Alex’s 18th birthday party by ‘screaming abuse’ at a female family friend who she had grown jealous of.

But despite her erratic behaviour, Alex brushed off his family and friends’ growing concerns, admitting: ‘I was a bit clouded by what happened because at the time I loved her.’

Alex eventually tried to break things off, but Jordan came back with the bombshell revelation that she was pregnant and returned to his life a year later with baby Thomas J (‘TJ’) who was born in May 2014.

It wasn’t long before the young couple were back together and, despite Alex’s hopes that she had changed, the cracks soon reappeared. 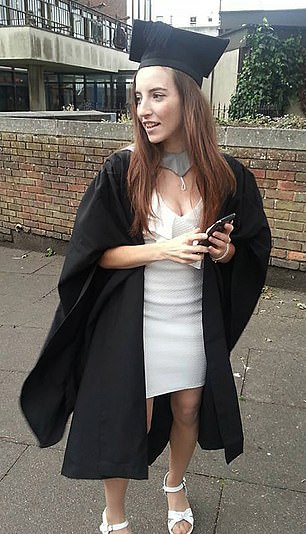 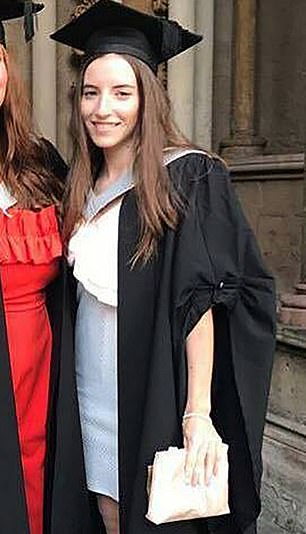 Sgt. Ed Finn of Bedfordshire Police who arrested Jordan (pictured at her graduation) said that for ‘all intents and purposes she seemed like a very nice lady’ 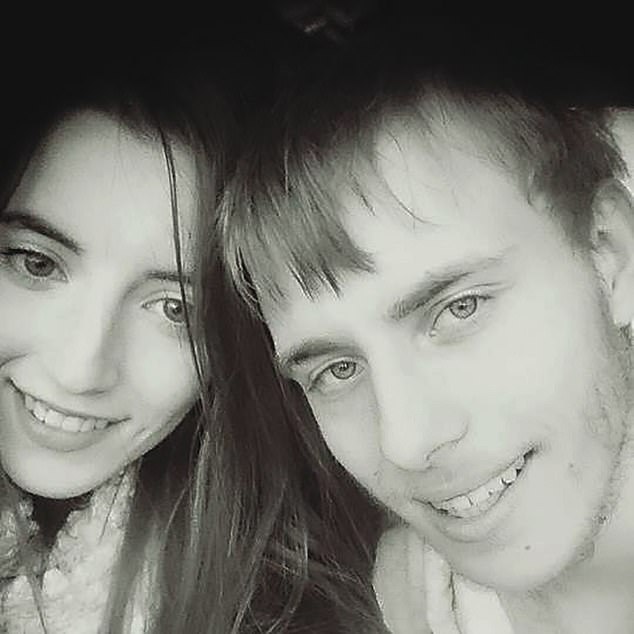 In his police interview when asked by an officer how he feels about moving forward, Alex replies: ‘I just don’t want to get hurt anymore’

As Alex’s best friend puts is: ‘[Jordan] just got back into his head to the point where you couldn’t do anything to stop it.’

Before long, Jordan forced Alex to choose between her and his family, which resulted in the young couple moving into their own home in Stewartby in July 2016.

Just 19 at the time, Alex didn’t speak to his parents for two years – even when he welcomed his second child, a little girl called Iris, in May 2017.

Things went from bad to worse when Jordan forced her boyfriend to change his phone number and threw away his PlayStation console to cut him off further from his loved ones.

She even set up a fake Facebook account where she would send abusive messages to Alex’s friends in a bid to isolate him further.

Years later, when police questioned Jordan, she would blame it on Alex, saying: ‘He made it very clear he never wanted to see his family.

‘He said he hated his family and he doesn’t want to talk to his family. He wants nothing to do with his family.’

In time, Jordan grew so controlling she took Alex’s wallet away, forcing him to quit the job he loved and accompany her to university every day. 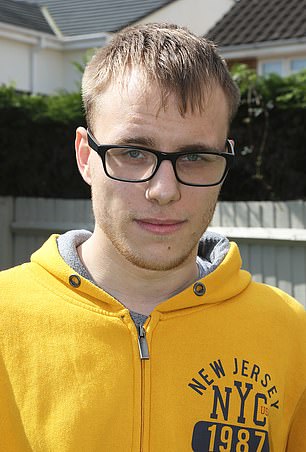 Alex claims things deteriorated to the point where his girlfriend would attack or assault him ‘every day’, and on one occasion she made him swallow an entire packet of sleeping pills.

One day she attacked him with a broken hairbrush, breaking his tooth in the process.

‘I had no money, I didn’t drive, so in the end I just ripped the tooth out,’ Alex says, recalling how being hit with a hammer or knife became part of daily life.

‘I’d be asleep and she’d smack me in the head and I’d look in the mirror and I’d just be bleeding,’ he says.

‘I wasn’t eating properly, she didn’t let me. She made him sleep on the floor instead of the bed.

‘I could feel that my body was starting to shut down. I didn’t want [my son] to get hurt, so I was fighting to keep going because I didn’t know what would happen if I was to leave.’

A kettle full of boiling water became Jordan’s weapon of choice, leaving her boyfriend screaming in pain as the skin hung off his arms and back.

‘She would wait up all night with a kettle of boiling water and if it went cold she would just wait and reboil it,’ he recalls.

A few days after one such attack, Jordan slashed her boyfriend’s hand with a breadknife and police were called, not for the first time, by their worried neighbours who heard Alex shouting, ‘Leave me alone, stop hurting me’.

Sgt. Ed Finn of Bedfordshire Police was on the scene and remembers how, despite there being ‘blood everywhere’, the couple both insisted that Alex’s numerous injuries were self-inflicted.

Officers took Alex to hospital to fix his badly burnt arm, but Jordan came in and ‘walked him out of the hospital’ despite the attempts of the surgeon – who could sense something was wrong – to make him stay.

‘It’s strange, because it was the right time and the right place but I didn’t say anything,’ Alex recalls. ‘I kept saying I did it to myself. I was scared of what she was going to do.’

But a few days later, when Sgt. Finn got a call from the couple’s address, he seized the opportunity to take action.

He recalls: ‘As soon as I saw him in the light of day, the state of him in terms of countless injuries all over his body the fact that he had these horrible dirty clothes on… he was pale, thin. I thought […] he was being abused.’

Despite his protests, Sgt. Finn was able to persuade Alex to reveal what was really going on – and finally arrest Jordan on suspicion of assault and grievous bodily harm (GBH).

When they managed to get Alex to hospital, doctors said he was just ‘ten days from death’ in his physical state, by which point his burns had become infected.

Bodycam footage and police tapes from the day he was rescued show the 21-year-old looking alarmingly frail, covered with bruises and dressed in bloodstained clothes, unable to make eye contact.

In his interview, when asked by an officer how he feels about moving forward, he replies: ‘I just don’t want to get hurt anymore.’

Alex returned home to his family where he was reunited with his children and, in September 2017, Jordan was charged with 17 counts including GBH and controlling coercive behaviour.

On 13 April 2018 Jordan was given two seven-year sentences for wounding with intent and GBH to be served concurrently at Luton Crown Court.

She was also handed a consecutive sentence of six months for controlling or coercive behaviour, becoming the first female in the UK to be convicted of this charge.

‘When the police found me I was told I was ten days away from death,’ says Alex. ‘I was in love with Jordan and it took me a long time to have the courage to say she was abusing me.

‘The day that she [went] to prison I felt so free. It was a massive relief. I remember just saying, I can actually look over my shoulder now for the first time in five years without worrying.

‘Now that I’m free from the relationship, I’m beginning to understand abuse better. And I hope I can help others understand it too.’

Alex now coaches a football team sponsored by a domestic abuse charity and talks to professionals to help them spot the signs of abuse.

‘The memories will never leave me,’ he says, ‘but I’m learning how to cope.

‘I have so much support from my friends and family and I’m building a future for me and my kids.’

Abused By My Girlfriend airs on BBC One at 22.45 on Tuesday 19 February