BBC Breakfast host Naga Munchetty has voiced her fury over President Trump’s ‘racist’ tweets in which he told four non-white Democrats to ‘go back’ to their supposed home countries.

The presenter revealed that she herself had been told to ‘go back to where I came from’, saying that all such comments were ’embedded in racism’.

While she did not directly call the President a racist, as many have done, Munchetty said she was ‘furious’ to hear Mr Trump’s language and predicted that ‘lots of people in this country’ would agree.

Mr Trump has refused to back down on his comments, insisting they were not racist.

This morning, Munchetty and fellow host Dan Walker spoke to Trump Victory 2020 campaigner Jan Halper-Hayes, who insisted the President is ‘not a racist’.

After the interview, Munchetty said: ‘Every time I have been told, as a woman of colour, to go back to where I came from, that was embedded in racism.

‘Now, I’m not accusing anyone of anything here, but you know what certain phrases mean.’

Saying she was ‘furious’ to hear Mr Trump’s comments, she went on: ‘I can imagine that lots of people in this country will be feeling absolutely furious that a man in that position feels it’s OK to skirt the lines in using language like that.’

Walker asked her if Mr Trump’s language ‘legitimises other people to use it’, to which she replied: ‘Yes.

‘It’s not enough to do it just to get attention. He’s in a responsible position.’

Munchetty, who grew up in south London, has Indian and Mauritian heritage. 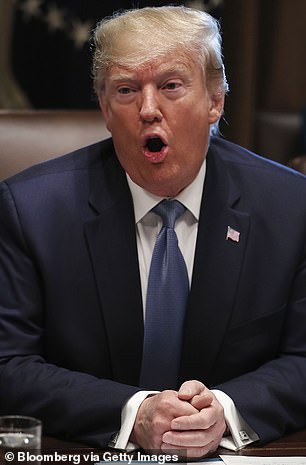 The row erupted on Sunday when Mr Trump took aim at the congresswomen ‘who originally came from countries whose governments are a complete and total catastrophe, the worst, most corrupt and inept anywhere in the world’.

He suggested: ‘Why don’t they go back and help fix the totally broken and crime infested places from which they came’.

While Mr Trump did not name the four, he was clearly taking aim at congresswomen Alexandria Ocasio-Cortez, Ilhan Omar, Ayanna Pressley and Rashida Tlaib – all high-profile left-wing women who are fiercely opposed to Mr Trump and his agenda.

All four are American citizens. Only Ms Omar was born abroad.

His comments have sparked waves of outrage, and yesterday the Democratic-controlled U.S. House of Representatives passed a resolution to condemn his ‘racist comments’.

Far from backing down, the President has intensified his attacks on the women in recent days, accusing them of ‘hating America’ and ‘spewing some of the most vile, hateful and disgusting things ever said by a politician’.

Responding to the backlash, Mr Trump insisted he does not have a ‘racist bone in my body’. 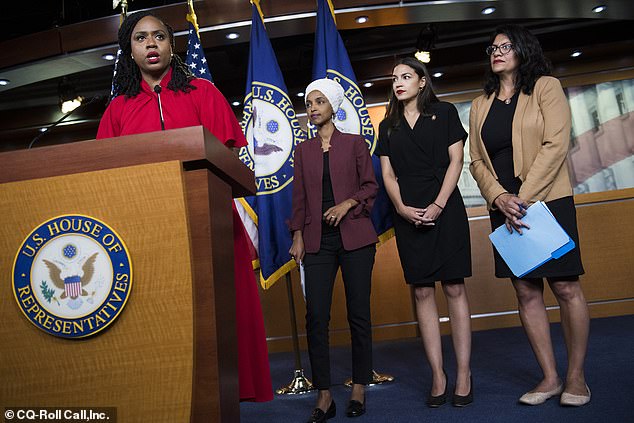 Targets: The four congresswomen who were the subject of Mr Trump’s attack – from left, Ayanna Pressley, Ilhan Omar, Alexandria Ocasio-Cortez and Rashida Tlaib – at a news conference in Washington yesterday

Ms Ocasio-Cortez hit back at that yesterday, saying: ‘You’re right, Mr. President – you don’t have a racist bone in your body.

‘You have a racist mind in your head, and a racist heart in your chest.’

All four of the congresswomen have called for Mr Trump’s impeachment and removal from office, although any such effort is unlikely to succeed.

Mr Trump appears to believe that the Democrats will suffer at the 2020 election if they are forced to embrace the four firebrand left-wingers.

Their backing for an ambitious Green New Deal has caused some division in the party, while Ms Omar has found herself in hot water over alleged anti-Semitism in the past.

However, Mr Trump’s strategy could also backfire, as a poll today showed a majority of Americans say his tweets were ‘un-American’.

In Britain, Theresa May labelled the President’s comments ‘completely unacceptable’, in an unusually strong rebuke just days before she leaves office.

Both contenders for the Tory leadership, Boris Johnson and Jeremy Hunt, also condemned Mr Trump but stopped short of calling him racist.