Before and after photographs capture the utter devastation in the Northern California town of Paradise that was all but devoured by an unforgiving wildfire.

In less than 24 hours, Camp Fire engulfed Paradise in vivid, 200-foot inferno that reduced hundreds of homes, businesses, churches, a school and a hospital to ash.

Abandoned, charred vehicles cluttered the main streets of the town in the Sierra Nevada foothills on Friday, evidence of the panicked evacuation that took place the day before.

At least nine people were killed and another 35 are still missing just over 48 hours later as emergency crews prepare to venture back into the town and conduct a more extensive survey of the destruction. 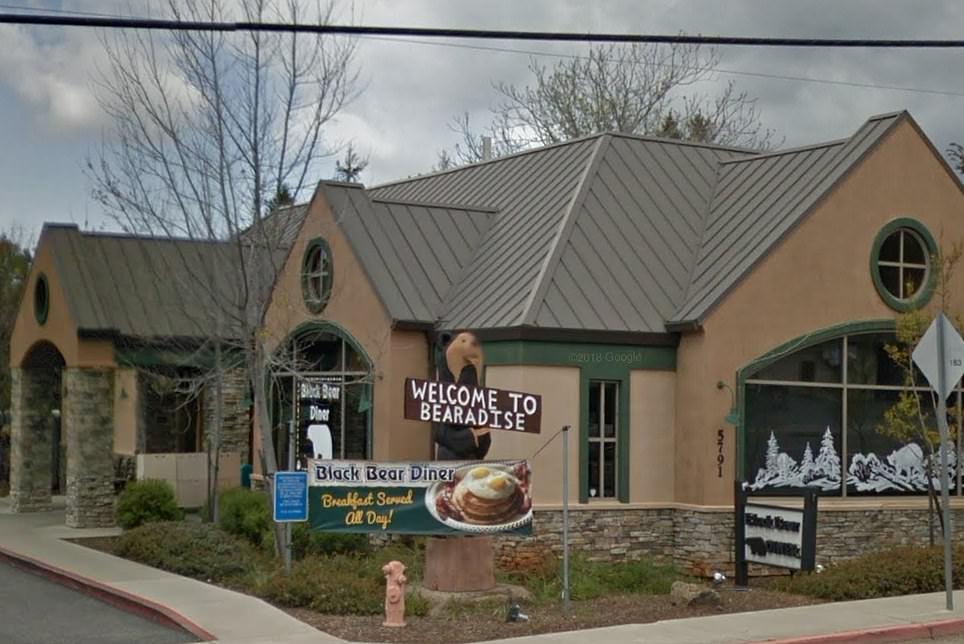 Before and after images show the devastation in the Northern California town of Paradise that was nearly obliterated by the Camp Fire. A statue stands in front of the torched Black Bear Diner, left, which is seen before the fire at right 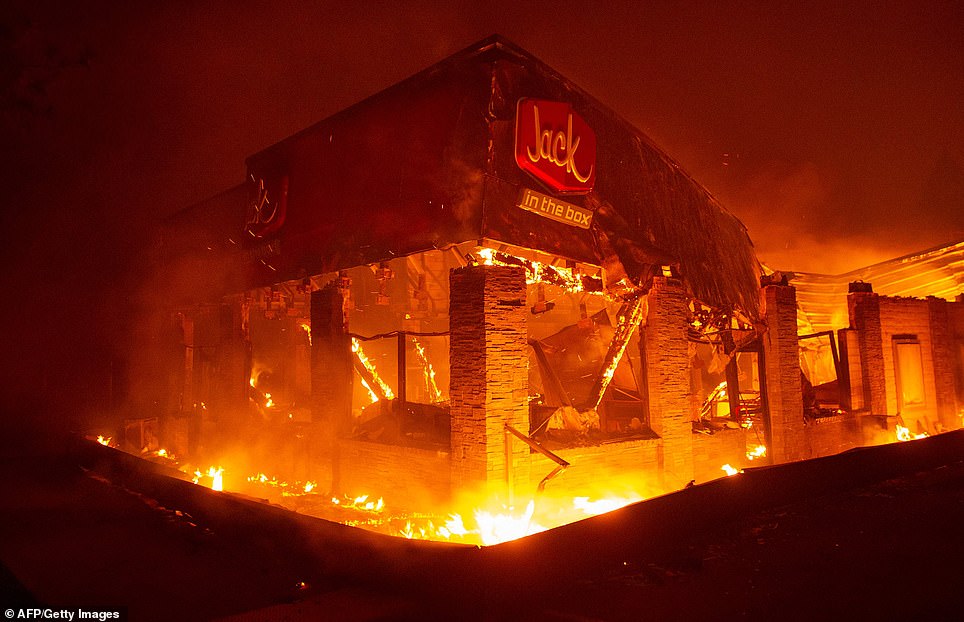 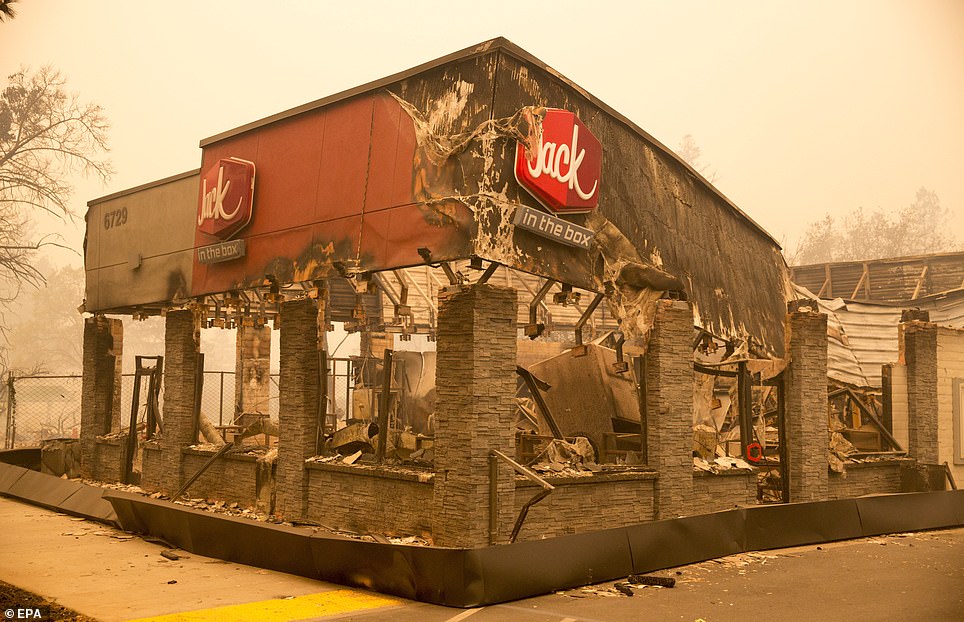 A Jack in the Box fast food restaurant is engulfed in flames as the Camp Fire overtook the town of Paradise Thursday night (left) and after the flames were subdued on Friday (right). The restaurant was one of the many buildings destroyed in the fire 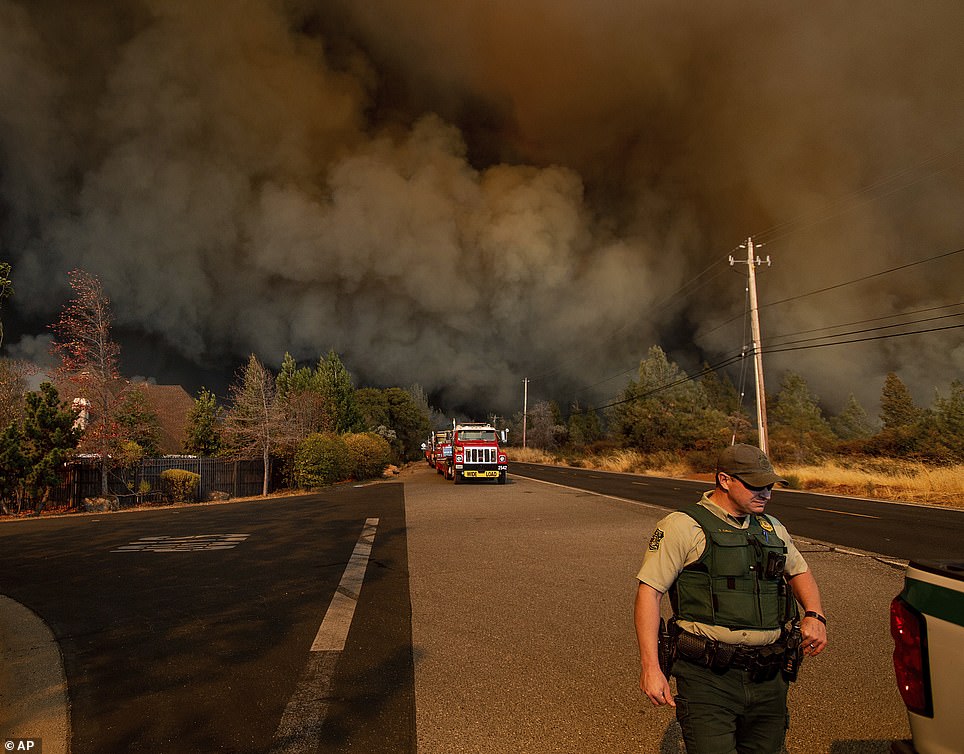 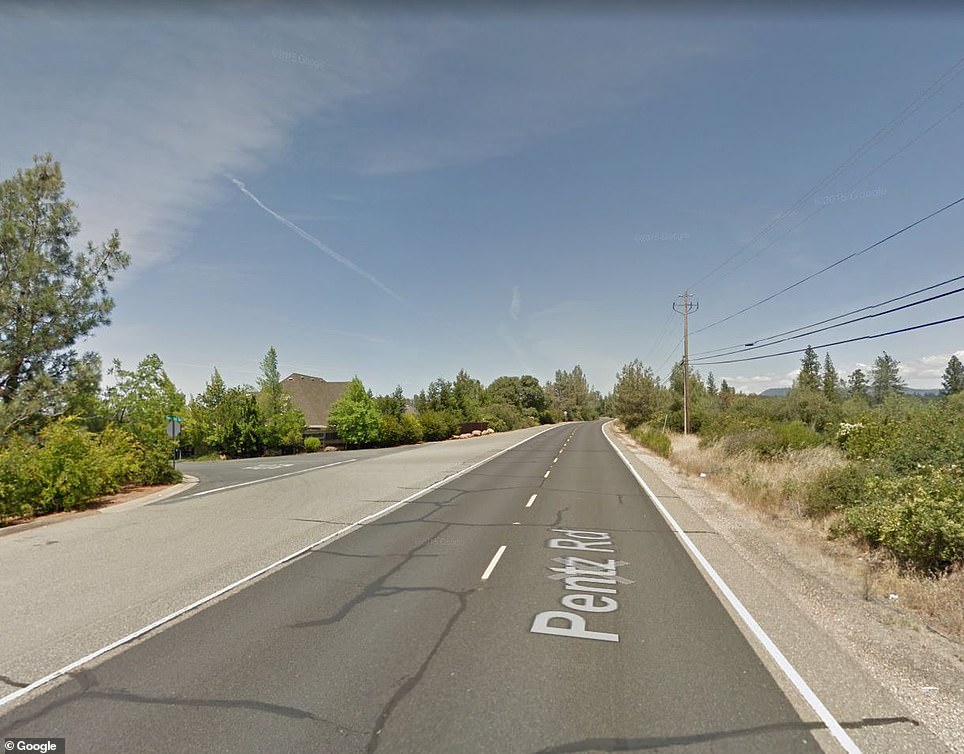 Fire crews are seen policing a street in Paradise after the worst of the fires passed (left). The road is seen beforehand at right 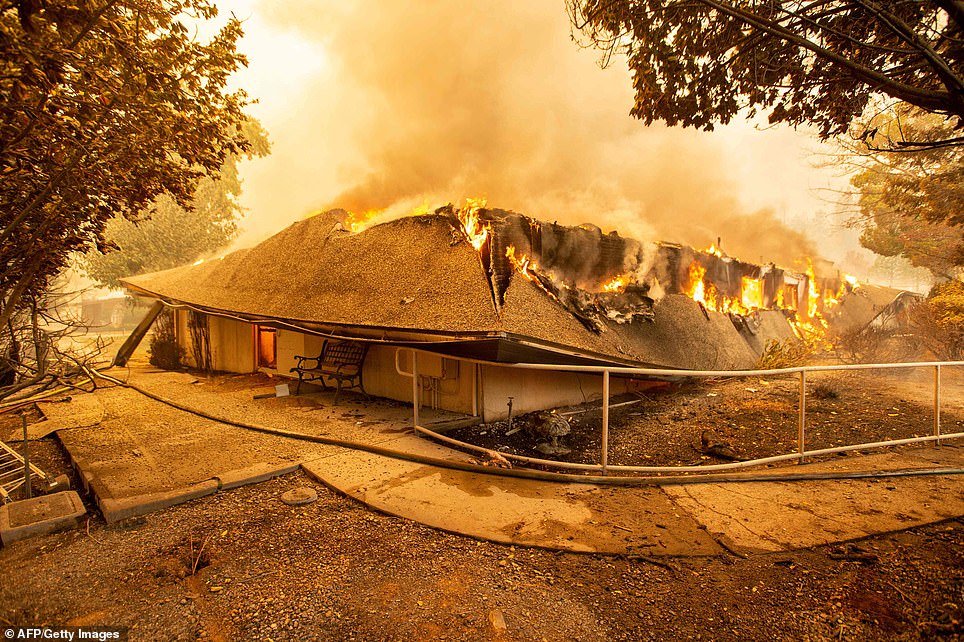 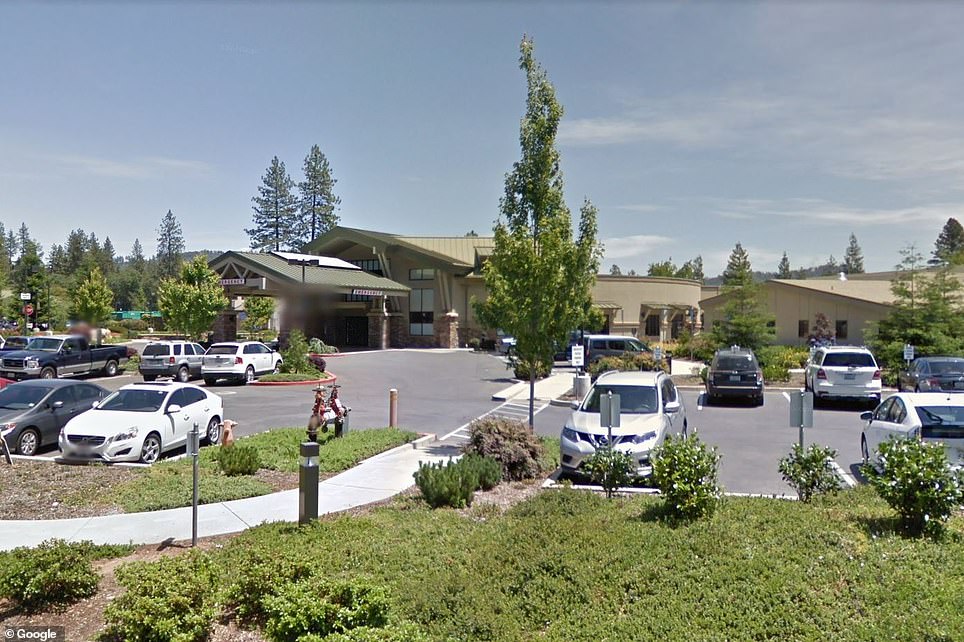 The Feather River Hospital is pictured left as it went up in flames on Thursday after all its patients were evacuated (left). It is shown right before the devastating fire 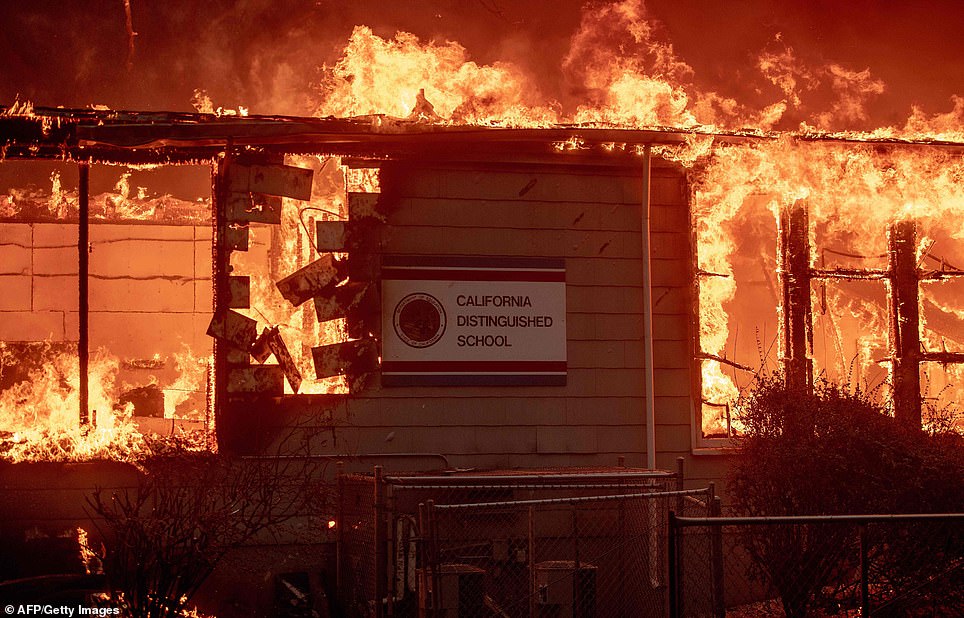 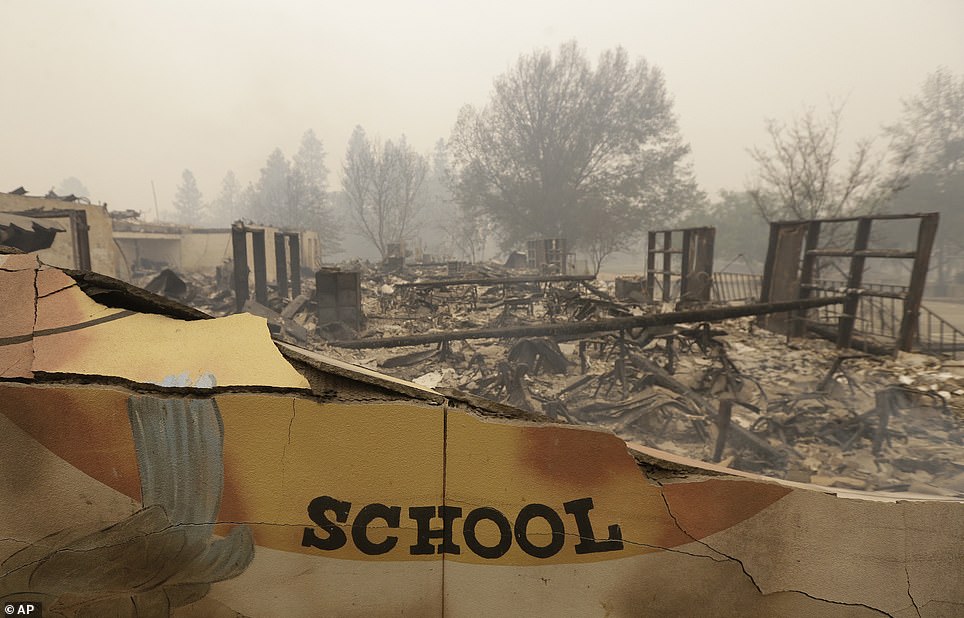 Paradise Elementary School also burned down in the Camp Fire, as seen in the photo at left. The ruins are pictured at right 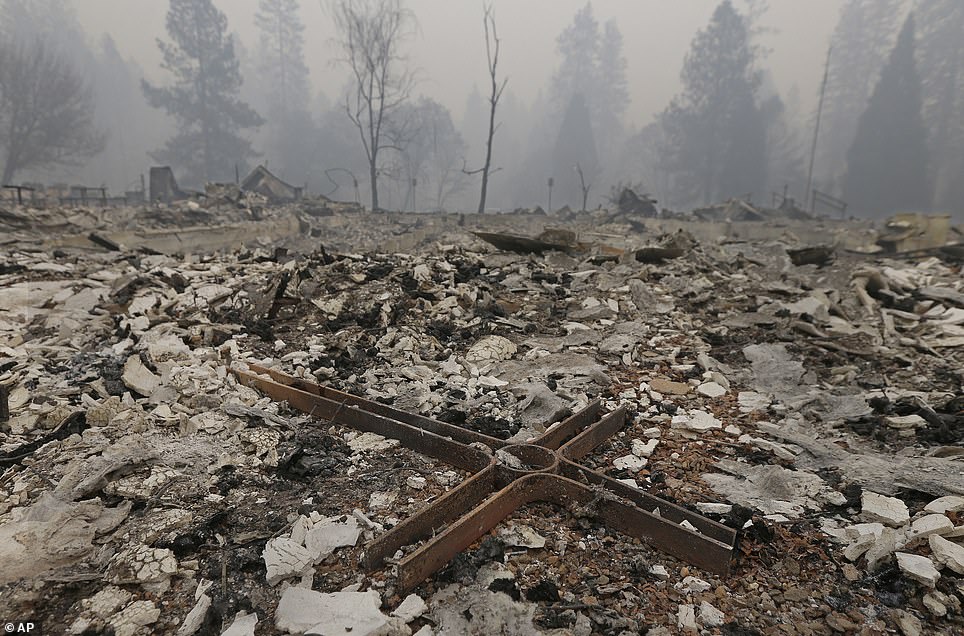 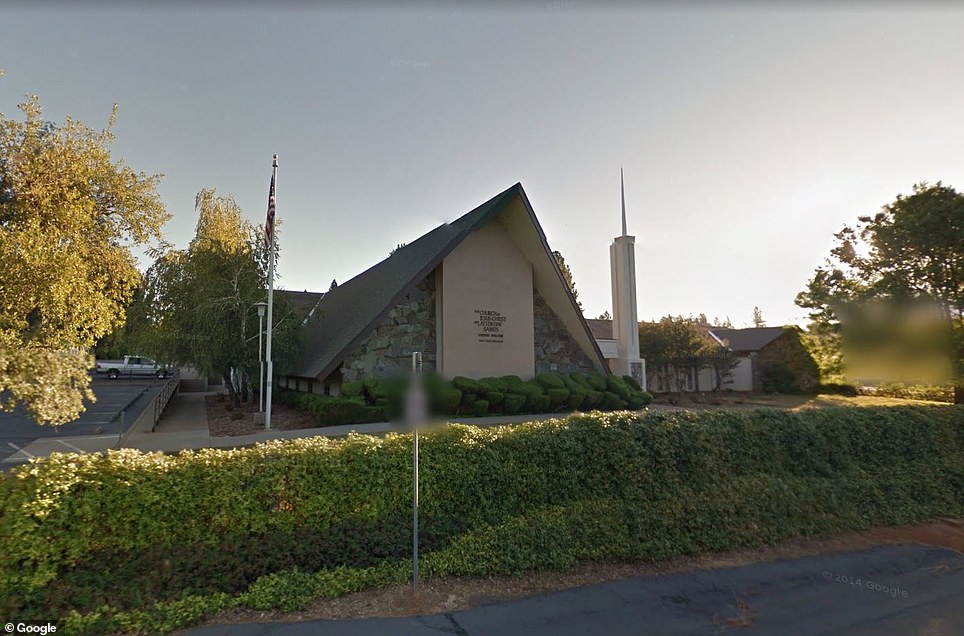 A cross lays among the rubble of a church in Paradise in the wake of the vicious fire (left). The Church of Jesus Christ of Latter Day Saints is pictured before it was razed to the ground (right)

The fire was reportedly ignited by a faulty PG&E power line in the Feather River Canyon on the western edge of the Plumas National Forest at around 6.30am Thursday.

Within three hours the blaze had exploded across a 5,000-acre area, leading Gov Gavin Newsom to declare a state of emergency as the flames arrived on the edge of Paradise and the town was ordered to evacuate.

Gridlock traffic quickly formed on the roads leading away from the wildfire, causing a number of desperate motorists to abandon their vehicles and flee on foot.

More than 3,000 firefighters were dispatched to take on the blaze, but they quickly gave up on trying to beat down the towering flames and opted instead to focus their efforts on helping people evacuate.

‘There was really no firefight involved,’ Capt Scott McLean of the California Department of Forestry and Fire Protection said. ‘These firefighters were in the rescue mode all day yesterday.’

The fire quadrupled in size overnight and spanned 110 square miles by Friday morning. As of midday Saturday the fire has torched an estimated 165 square miles and is 20 percent contained, according to officials.

An estimated 6,500 buildings were incinerated by the fire. McLean remarked: ‘Pretty much the community of Paradise is destroyed. It’s that kind of devastation.’

Five people were reportedly burned alive in their cars while three more were found dead outside and another inside a residence, bringing the death toll to nine. Three firefighters have been reported injured.

Local police in Paradise said they had received two reports of looting but have yet to make any arrests. ‘It is despicable conduct,’ Butte County Sheriff Kory L Honea said of would-be looters, vowing swift arrest and maximum penalties. 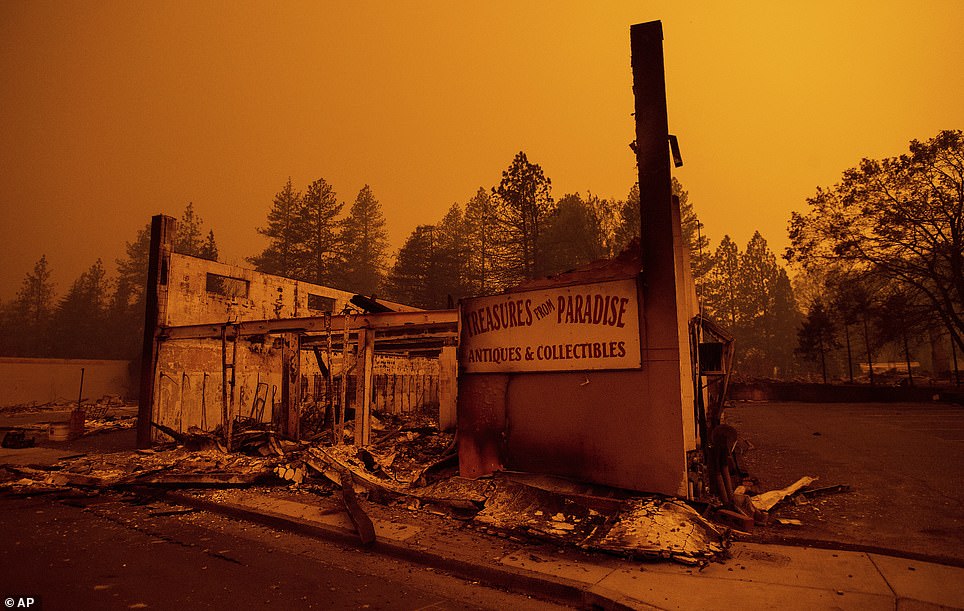 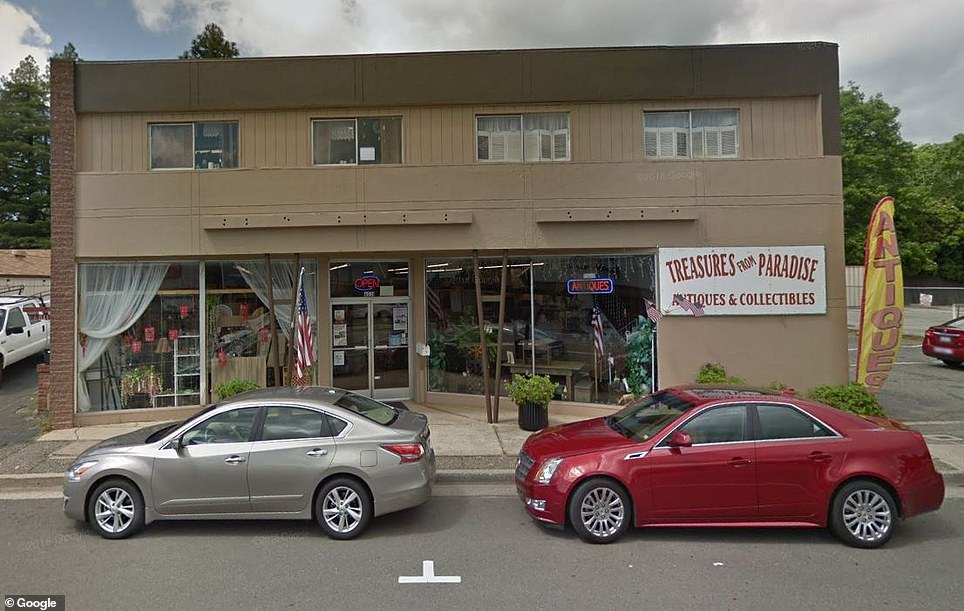 Flames envelop the Treasures From Paradise Antiques and Collectibles shop above left. The shop is pictured before the fire on the right 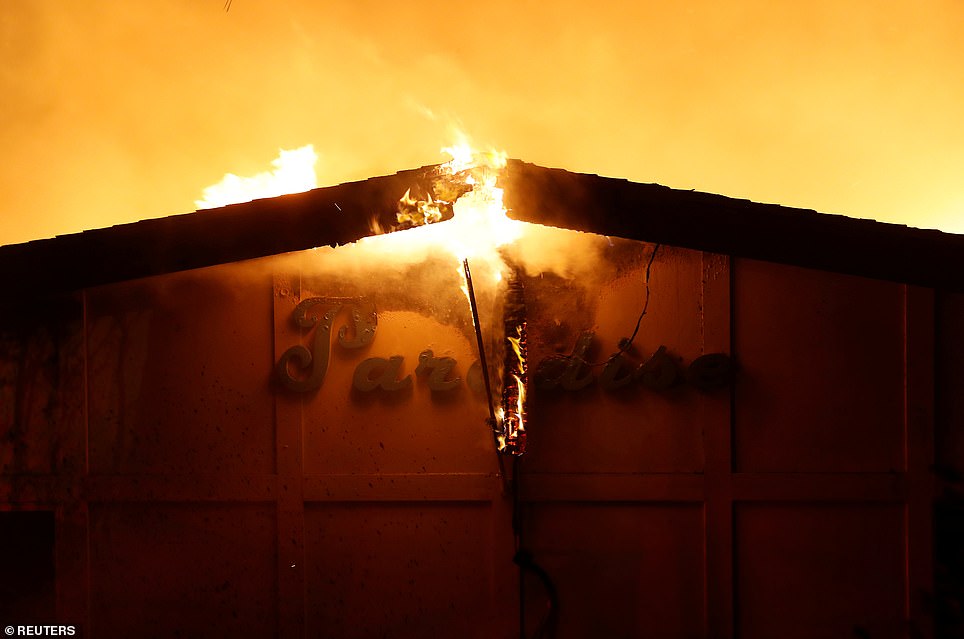 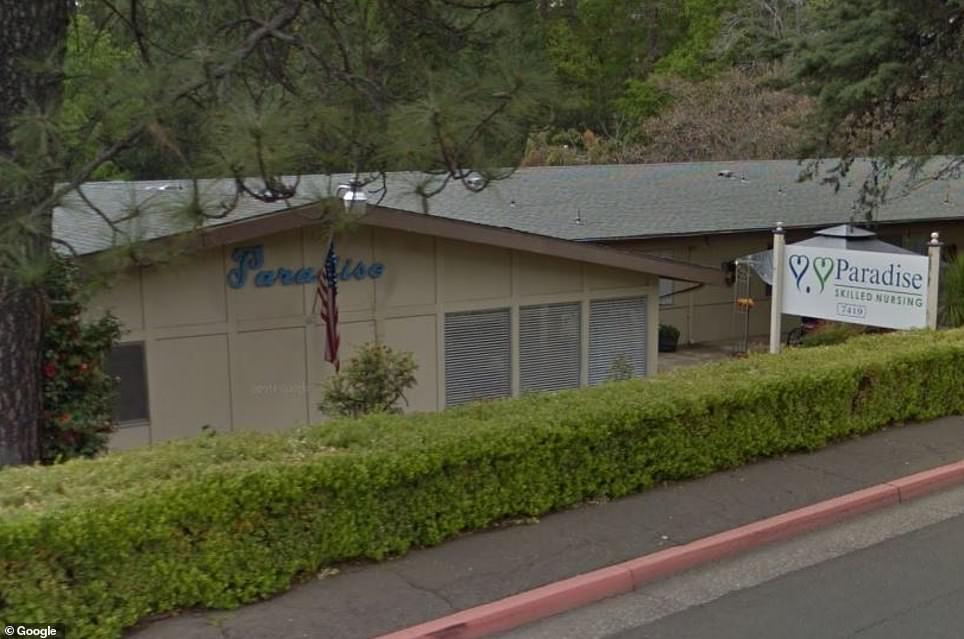 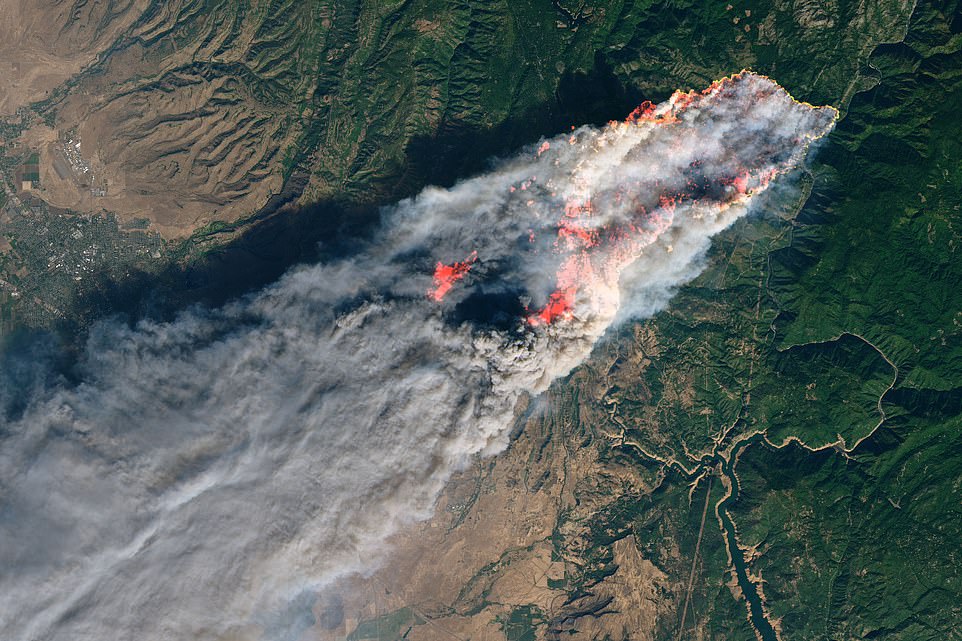 The Camp Fire (above) completely engulfed the town of Paradise in Northern California, growing to 70,000 acres since starting on Thursday morning and killing at least five people who became trapped in their cars while trying to escape

Pacific Gas & Electric Company says it will cooperate with any investigations stemming from the Camp Fire.

The utility company told state regulators on Thursday that it experienced a problem on an electrical transmission line near the site of the blaze minutes before the fire broke out. The company said it later observed damage to a transmission tower on the line.

PG&E spokeswoman Lynsey Paulo said Friday the information was preliminary and stressed that the cause of the fire has not been determined.

The wildfires come unusually late in the season for California, after a lack of fall rain storms left the region unseasonably dry. 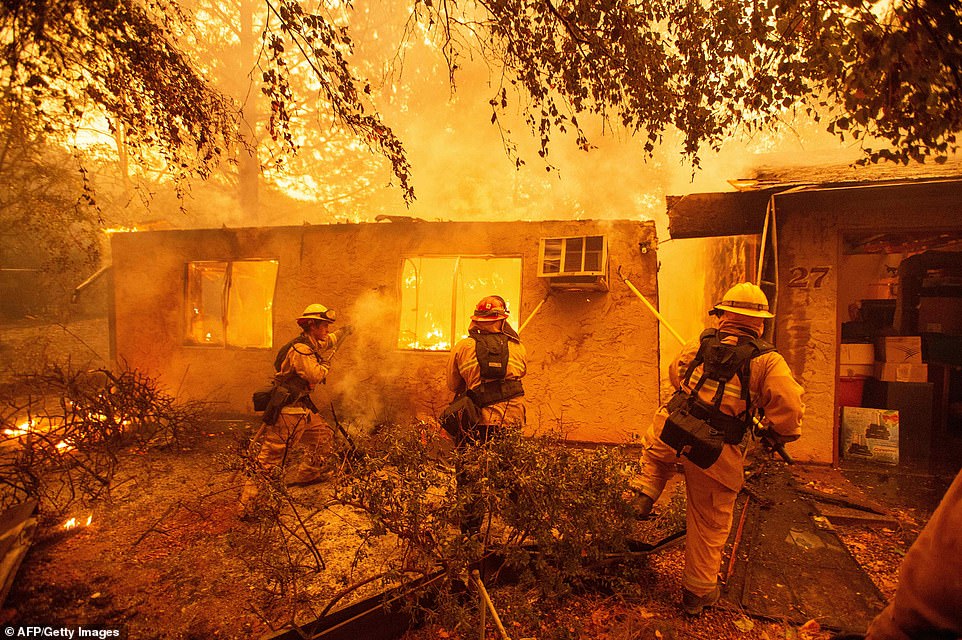 Firefighters push down a wall while battling against a burning apartment complex in Paradise. The town’s population has been evacuated and entire neighborhoods leveled 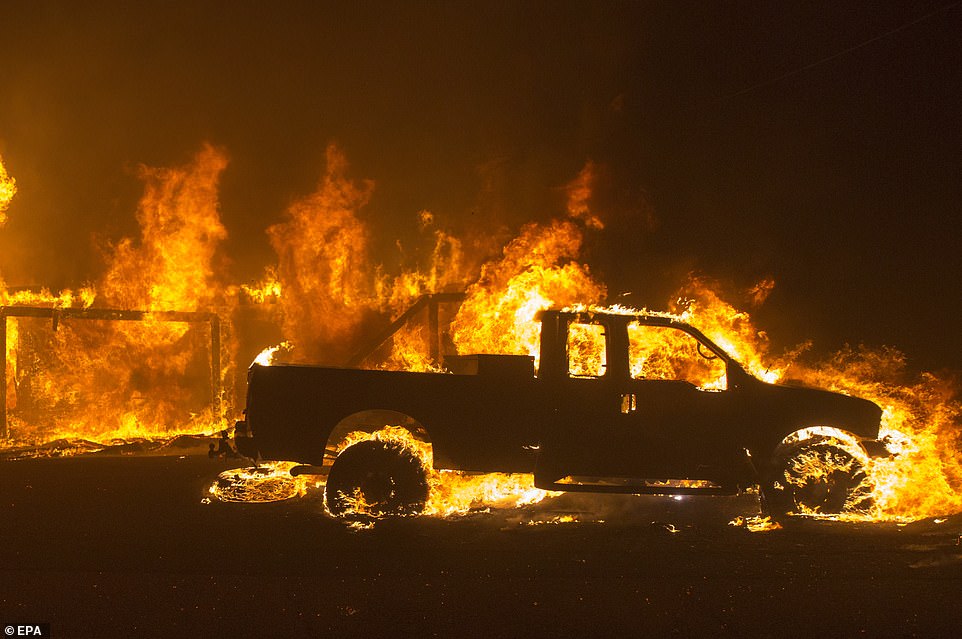 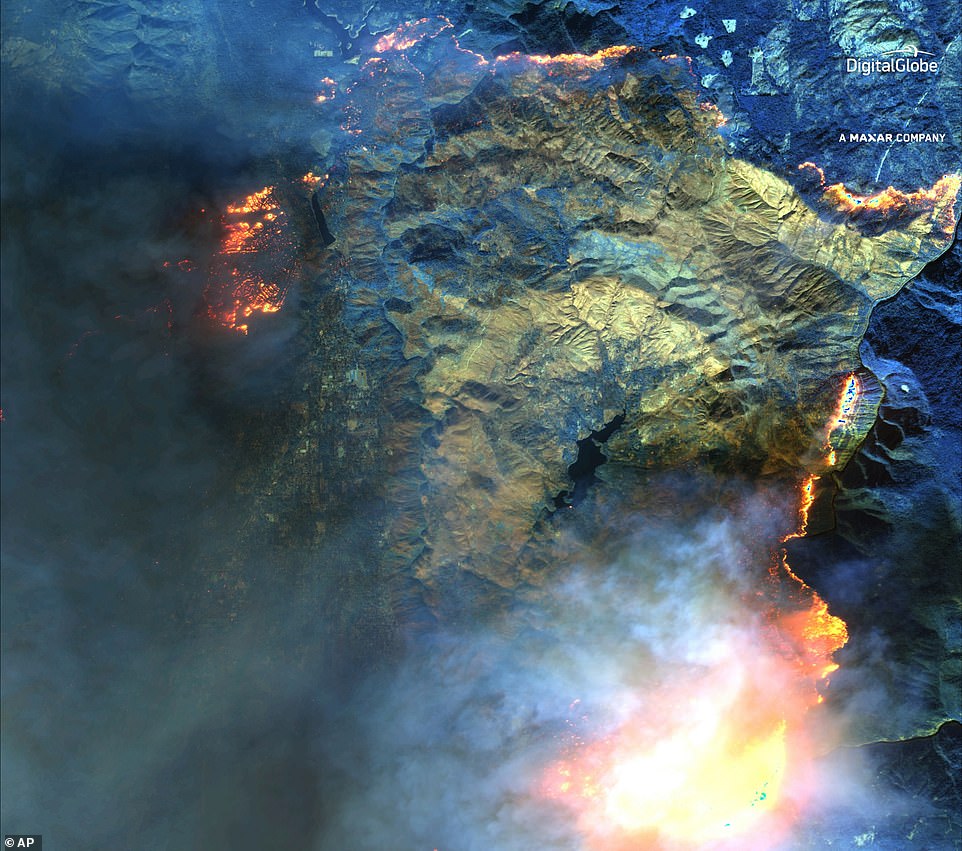 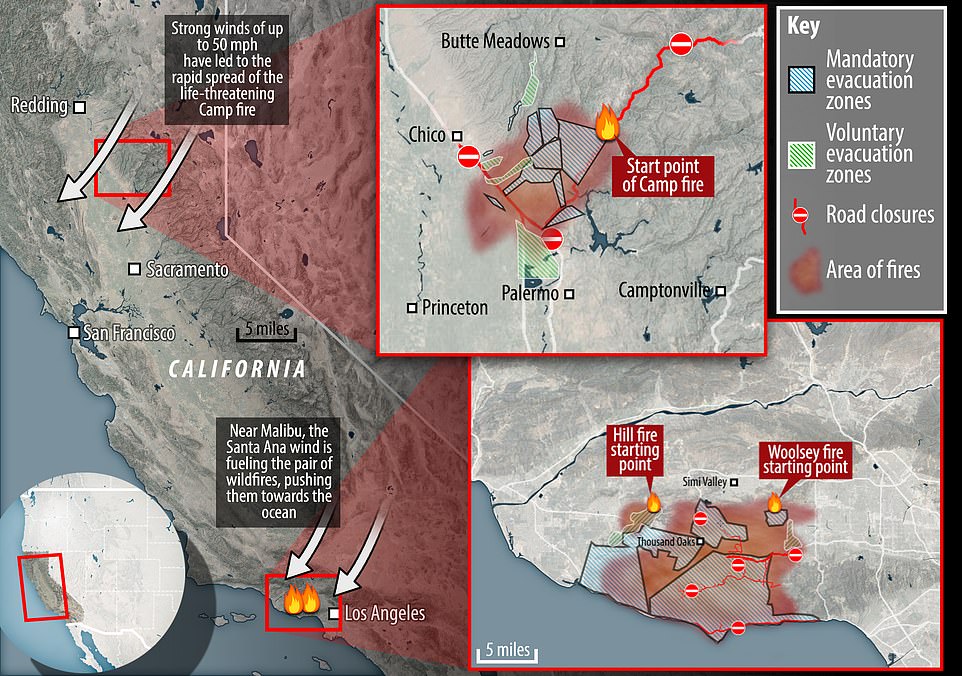 The map above shows the three major fires currently alight in California, two in the south and one in the north, as of Saturday