A diverse diet and flexible behaviour allowed a type of ‘land fish’ to make a dramatic transition out of the water, a new study shows.

Australian scientists pooled data on hundreds of different species of blennies – a diverse family of fish, some of which are aquatic and others that have left the water completely.

Some species of blenny – which typically has a slim and almost eel-like body – made their dramatic transition out of the water millions of years ago.

While being a ‘jack of all trades’ allowed these species to make the journey onto land, they’ve been forced themselves to become specialised to survive.

This has led to noticeable physical changes in their evolution, such as teeth suited to scraping rocks for morsels and mottled skin to help blend in with rocks and hide from predators.

The Kirk’s blenny (Alticus kirkii) is a species of combtooth blenny. Kirk’s blennies are found around the Indian Ocean, inhabit waters near the shore and often spend time out of the water.

‘Some species of blennies never emerge from water and others stay on land full-time as adults – so they present a unique opportunity to study fish evolution in action and explore the transition from water to the land in a living animal,’ said Associate Professor Terry Ord at the University of New South Wales, Australia.

Blennies are small fish that normally live in the sea.

They are found in both tropical and cold waters.

Tropical blennies are usually only moderately elongated whereas cold water inhabitants can be long and eel-like.

They all have a long dorstal fin which helps them jump around on land.

‘In this study, we found that having a flexible diet has likely allowed blennies to make a successful leap onto land – but once out of the water, these remarkable land fish have faced restrictions on the type of food available to them.

‘These restrictions have triggered major evolutionary changes in their morphology, specifically dramatic changes in their teeth, as they have been forced to become specialist scrappers of the rocks to forage on algae and detritus.’

Having a broad diet or being behaviourally flexible can help a species move into a new habitat, but once there, this flexibility becomes ‘eroded’ by natural selection.

This indicates that highly specialised species are less likely to be able to make further transitions, or cope with abrupt environment changes in their existing habitat.

Some are aquatic, while others spend time in and out of the water in the intertidal zone – an extreme environment with fluctuating water levels and pools that can rapidly change in temperature and oxygen levels. 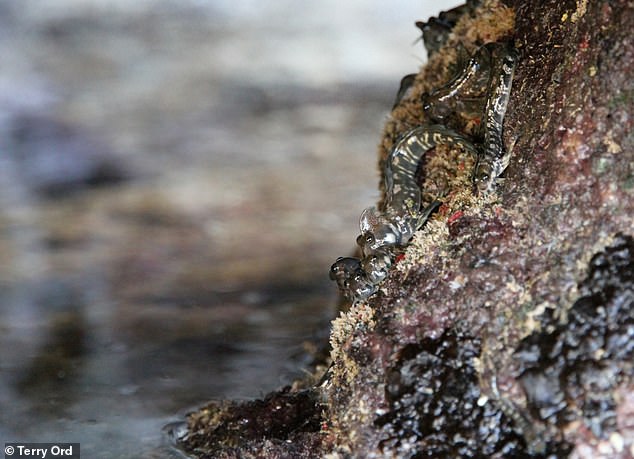 Others still are terrestrial and spend almost their entire lives out of the water in the splash zone and must keep moist in order to breathe through their skin and gills.

Despite these challenges, blennies have been incredibly successful in repeatedly making these dramatic transitions.

Terrestrial blennies are really agile out of water and likely adapted their body shape to allow them to hop about the rocks freely.

As an example, the rockskipper (Istiblennius zebra) is a small Hawaiian blenny representative of several that live along shores and can hop about on land, as can the Pacific leaping blenny (Alticus arnoldorum).

Kirk’s blennies (Alticus kirkii), found around the Indian Ocean, inhabit waters near the shore and often spend time out of the water, meanwhile.

But the fact they developed this unusual ability – one not commonly associated with a fish – implies they might never be able to go back to the water further down the evolutionary line. 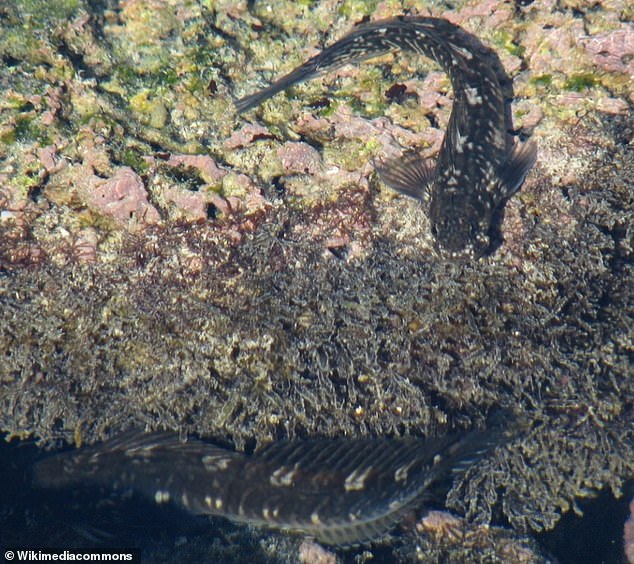 As well as noticeable physical changes, sensory systems may also have adapted out of the water as well, given vision and smell would likely work differently in these environments.

The research team used data collected on many different species of blenny from across the world, including on diet and teeth morphology, behaviour and frequency of different species emerging from water for brief or extended periods.

‘We threw a set of complex evolutionary statistical models at this combined data and we were able to reveal the sequence of events that likely allowed aquatic marine fishes to ultimately evolve into fishes that could leave water and then colonise land,’ said Dr Ord, who worked with researchers at the University of Minnesota in the US.

‘Our study also showed how those species on land adaptively changed to better suit the specialised diet needed to survive on land.’

While the data suggests a flexible diet and behaviour allows a transition to new environments to occur, it cannot confirm the cause. 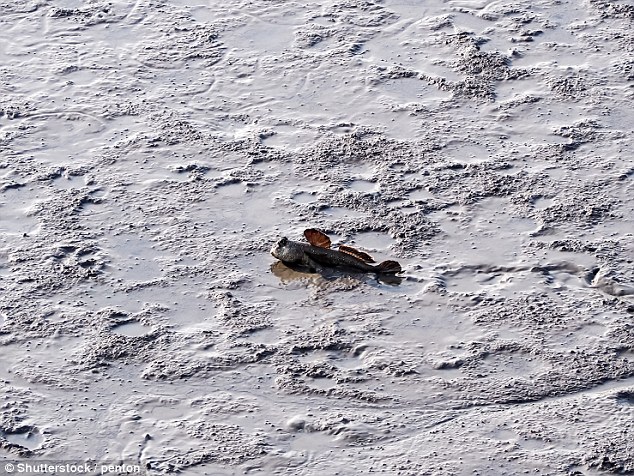 Blenny fish in the Cook Islands are in the process of colonising land and are using their fins to jump around rocks, according to experts

‘Ideally we would perform some type of experimental investigation to try to establish casualty,’ Dr Ord said.

‘What this experimental study might be is hard to imagine at this stage, but we’re working on it.’

Some blenny fish at Rarotonga, the largest of the Cook Islands in the South Pacific Ocean, have already fully-transitioned to life on land, research at the University of South Wales previously revealed.

They still use their gills to breathe but their tail fins have become so strong they use them to jump around.

These new findings have been published in Functional Ecology.