A convoy of Belarusian tanks and troop carriers were seen queueing near the Ukrainian border today as officials from Moscow and Kyiv carried out peace talks.

The talks ended without resolutions and a second round of negotiations will be held in the coming days.

Russian officials said: ‘We have identified certain points from which we can predict general positions.’

Ukrainian President Vlodymyr Zelensky earlier admitted he was not confident of a positive resolution, adding that he owed it to his people to at least try and engage.

He had been reticent to agree to talks in Belarus, a country used as a staging ground for the Russian invasion and which is now poised to join the war, offering instead to meet in Istanbul, Warsaw or Baku.

Ukraine had indicated it would request a ceasefire and full withdrawal of Russian forces but Moscow remained tight lipped over what the negotiations, held at noon in Gomel in southeastern Belarus, would entail.

It comes as columns of Belarusian military vehicles were spotted today heading east from the south western corner of the country in what appeared to be preparations to join the invasion of Ukraine.

Some observers warned the talks could be a pretext for Moscow to ramp up its attacks on Ukraine if Kyiv’s officials refuse Russian demands. 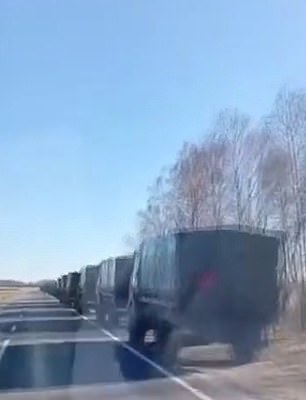 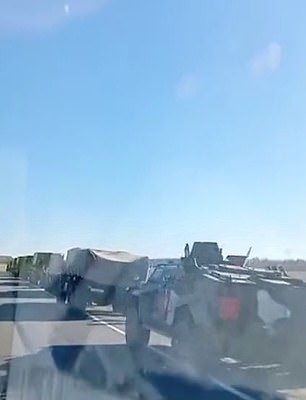 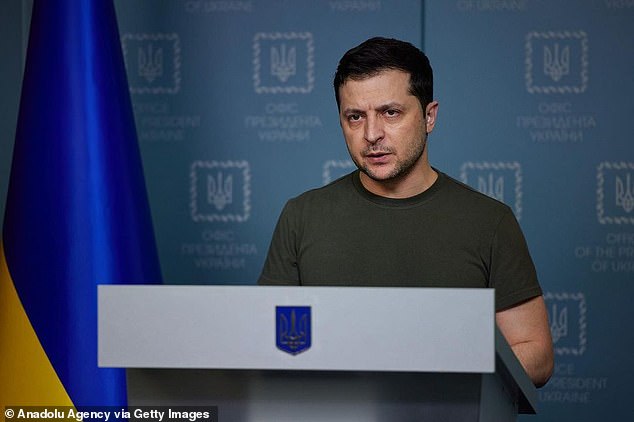 Ukrainian President Vlodymyr Zelensky admitted he was not confident of a positive resolution, adding that he owed it to his people to at least try and engage

Among those present at the talks were the Ukrainian defence minister, a lead advisor to the President’s office and the deputy minister of foreign affairs.

But while Ukraine sent its defence minister and other top officials, the Russian delegation was led by Putin’s adviser on culture – an unlikely envoy for ending the war and perhaps a sign of how Moscow views the talks.

Meanwhile ahead of peace talks today Russian military officials ordered heavy strategic bomber flights as part of what appears to be efforts to prevent international aid from reaching Ukraine.

Observers have warned the order suggests Vladimir Putin’s forces are preparing to ramp up the bombardment of Ukraine in the coming days.

Richard Nass, president of the Council of Foreign Affairs, warned recent developments mean the most likely development of the conflict is ‘conventional’ military escalation by Russia, rather than a diplomatic breakthrough.

Nass, writing on Twitter, speculated that Moscow was using negotiations to ‘appear somewhat reasonable’ to slow sanctions against Russia as well as help to Ukraine.

But he warned the Kremlin’s forces were likely to turn to ‘more destructive munitions’ if peace talks collapse, using the failure to negotiate a diplomatic breakthrough as a pretext. 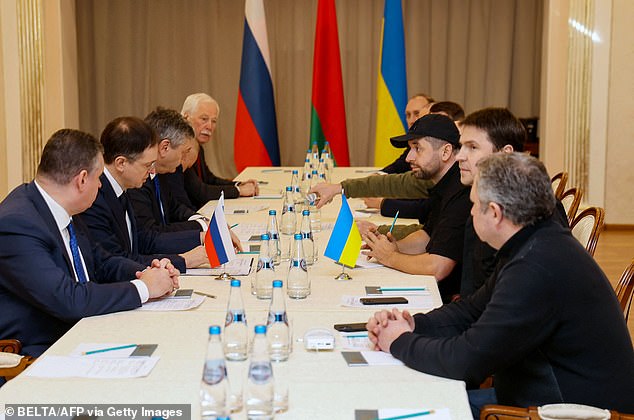 Delegations from Ukraine and Russia, including aides to both Vladimir Putin and Volodymyr Zelensky, hold peace talks in Belarus’ Gomel region 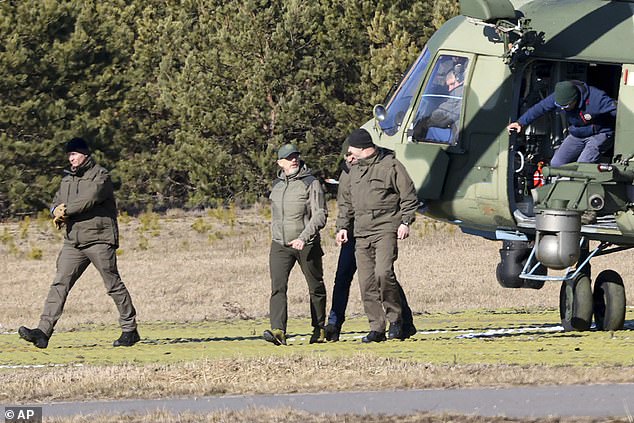 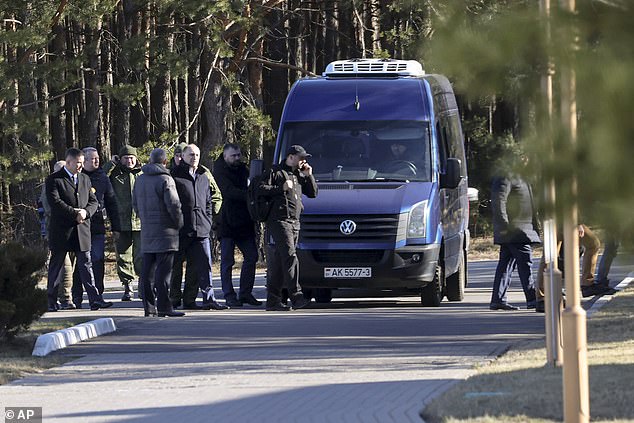 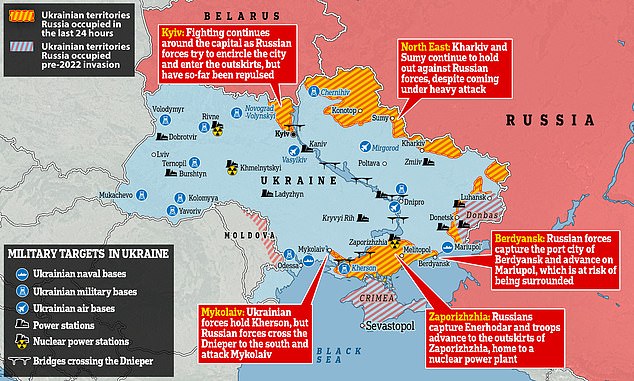 Ukraine war, day 5: Russian forces are now attempting to skirt around Kyiv and encircle it from the west. Troops fighting out of Crimea continue to make gains and are likely to surround Mariupol soon, while also reaching the outskirts of a key Ukrainian nuclear plant. Fighting in the east continues to be heavy with no breakthrough for Putin 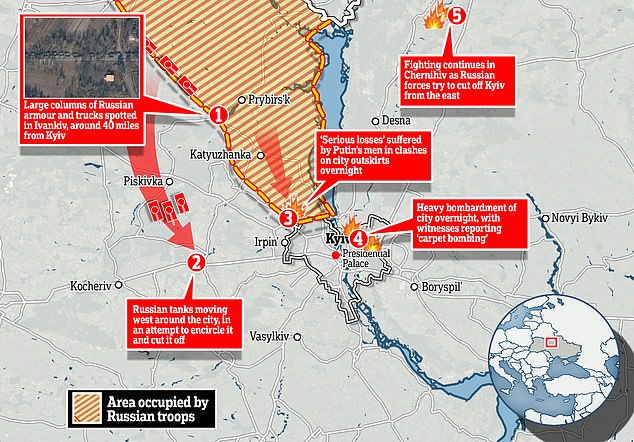 Kyiv has been holding out for days against Russian attempts to breach the outskirts of the city, with tanks now trying to encircle it and a large column of armour approaching amid fears the fighting could get much worse

As outgunned but determined Ukrainian forces slowed the Russian advance and sanctions crippled the Russian economy, the military confirmed that its nuclear forces were on high alert, following President Vladimir Putin’s order.

While that raised the unimaginable specter of nuclear conflict, it was unclear what practical effect it had.

A tense calm reigned in Kyiv by Monday morning, explosions and gunfire were heard in embattled cities in eastern Ukraine, and terrified Ukrainian families huddled overnight in shelters, basements or corridors.