Belinda Cleary’s A380 flight to Doha, Qata is a disaster thanks to one male passenger

If you can’t go a few minutes without dragging snot up the back of your throat, curling it into a ball with your tongue and hawking it into your complimentary sick bag then you don’t belong on a plane.

It’s almost beyond belief that I have to write that sentence in a post-pandemic world but it appears some people still lack basic social awareness and etiquette.

I’ve been on more than 100 flights – all economy. I have sat with babies, in the middle seat, had questionable meals or no meals at all. And yet I have never had a ‘bad’ flying experience, until now.

Economy is my go-to flight ticket, with the very basic carry-on only fare my favourite and I have had a lot of luck with my travels so far. But my love for the cheap tickets was recently tarnished (pictured here after scoring my own row on a flight from Brazil to Dubai) 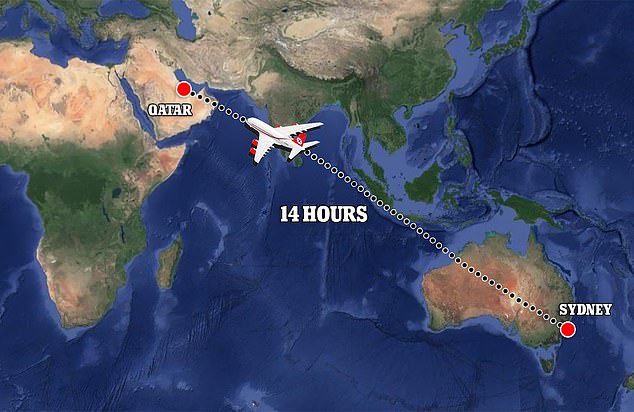 What is your biggest flight no-no?

Last month I sat next to a ‘snot gurgler’ from Sydney to Doha and it’s safe to say that my good run, and to be fair, relaxed boundaries were stretched and broken.

The first time I heard the man sitting next to me drag mucus up his throat a wave of nausea swept over me.

Fourteen hours in, as we prepared to land I didn’t think things could get any worse.

But I was wrong.

First let me start at the beginning, because every moment counts in this tale of the worst flight of my travel career.

I was super excited to be in the top section of the A380 – there’s only a dozen rows of economy up there so things seem to run smoother.

As I approached my row I heard a passenger coughing and spluttering and wondered why someone who was so obviously unwell would be flying.

Then as the noise got louder I looked up to find it was coming from a male sitting next to my designated seat.

That’s when I noticed he was also a ‘man spreader’, with his legs comfortably taking up half of the space available on the seats either side of him.

1 – Start your flight the right way: Have all of your documents in order. Waiting in line for people to dig their passport out of their bag, find their visa emails and locate their return ticket is annoying for everyone. Airlines often send an email explaining what you will need so have it all ready to go before you get to the desk.

2 – Reconsider flying if you are unwell: Anyone who has flown with a cold knows it can cause excruciating sinus squeezes. I can’t imagine what being very unwell feels like but I have been on flights where the sick person has to call a doctor midway, or spends the entire time in the bathroom.

3 – Book the right seat for you: If you are someone who needs to stretch their legs every 20 minutes, go to the bathroom a dozen times or get up for whatever other reason then book the aisle seat. Being woken up on a long-haul flight because your middle-seat pal or the guy at the window can’t sit still is annoying and guarantees you will arrive to your destination exhausted.

4 – Don’t eat like a goblin enjoying their first meal: Full table manners aren’t necessary but don’t slurp your food, spit in your containers or grunt and move around when you are eating. It’s great to see someone enjoying their food but not when they knock everyone else’s around.

5 – Don’t lurk in the aisle: If you haven’t booked seats with your friends or family then make peace with the fact you won’t be able to chat with them the entire time. Pooling around grandma, hovering over her neighbours and invading others space when you jump into their aisle to avoid catering carts is rude and annoying.

I put my bag in the overhead locker, asked him to move his leg so I could sit down, and then strapped in for a rough night.

Before we had even managed to take off, he had gollied into the sick bag a dozen times.

The noise was so grating that I could hear it over my headphones as I tried to lighten my mood with an inflight movie.

I felt a tap on my shoulder. It was a hostess apologising for being unable to find me a spare seat.

I hadn’t asked but as I looked around and met the eyes of other passengers, it was clear they had all been thinking the same thing – there were testing times ahead.

One woman whispered ‘I am sorry’ over the aisle.

To make things worse the man in front was the kind who likes to recline their seat. The whole way. This doesn’t usually bother me, but it gave me less room to escape the germs of my new friend to the left.

When food came he didn’t pop it back up. Looking around the cabin it become apparent the hosts and hostesses would not be asking people to sit up during meals.

I chose the noodles, as did my neighbour who was thrilled to be allowed to remove his mask.

To my horror he took the opportunity to dig in his nose, for whatever snot he hadn’t managed to evict already, before happily wiping his offending finger on his pants. He didn’t put the mask back on until we landed.

I tried to ignore it and instead of making a comment, I focused on wrestling with the tray table which was stuck because of the reclined seat.

Then the man in front started shuffling around to get comfortable, sending my meal flying toward the snot gurgler beside me.

I looked up and watched him as he ate with his face nearly in the bowl, sucking down the meal like it was the first in days. He paused only to clear his throat, this time hawking the mucus into the empty juice cup while his spit bag was tucked safely between his feet.

Every cough came with a lovely spray of saliva, and I promptly forgot my own hunger as I watched droplets – yes droplets, land on my meal.

Then the farting started.

As the flatulence continued, I felt like he would surely excuse himself and go to the toilet.

The smell filtered through the entire row, the ‘sorry’ woman from earlier looked like she was going to throw up. 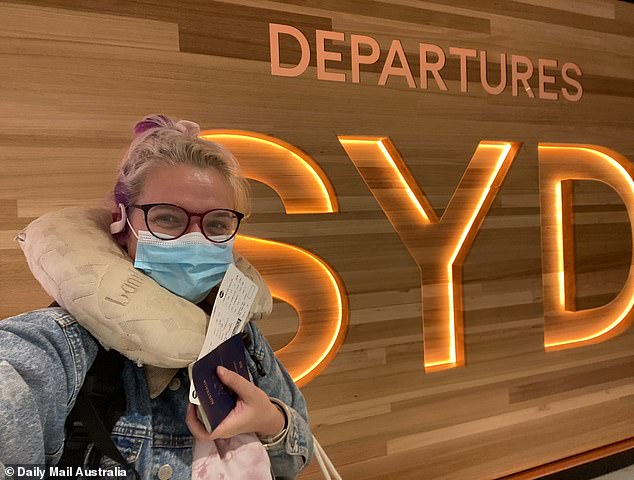 The experience meant I was exhausted on arrival to Doha, paranoid that I would fall ill as he managed to cough all over me for hours, and was actually considering buying more expensive tickets in the future

Wave after wave of the toxic-smelling gas leaked out every 15 minutes or so for the 11 hours we were trapped on the plane.

I leaned into the aisle to try to find some room as the reclined chair was still taking up space, and my neighbour’s creeping knee was slowly sliding back into my territory.

When the captain announced we were landing, my first thought went to the cabin crew and 37E’s white paper bag.

I felt bad for them having to dispose the weighty contents, but then something much more disturbing happened.

As we waited for the premier class at the front to disembark, he neatly folded the top of the white bag three times.

It reminded me of when I worked at McDonald’s and had to do the two-and-a-half fold before handing someone their meal.

He then fastened his mask, put on his satchel and tightened his grip on his bag of loogies, taking it with him from the plane.

As I walked past him in the airport, I noticed him open the bag to spit again, passing a few bins and opportunities to discard it in favour of having it on hand to use later.

I told a friend, who joked ‘that wouldn’t have happened in business class’.

They’re right of course, and while I have had many pleasant economy-fare flights, it won’t take many more snot gurglers or sneaky farters for me to consider forking out for a better ticket.