Belle Lucia, 24, is praised for not photoshopping her visible veins on her chest

Australian model Belle Lucia who’s seven months pregnant has proudly shared a candid picture of herself showing her visible veins on her chest.

The 24-year-old, originally from Sydney but now lives in London, has been sparking debate over her seemingly tiny baby bump in recent months.

But this week, the social media influencer was praised by fans for showcasing the ‘reality’ of an expectant mother’s body on Instagram.

‘I know I got a veiny chest,’ she said in the caption, alongside a snap of her in a bikini.

Her post was quickly met with positive comments, with many people praising her for not digitally editing herself while pregnant.

‘Thank you for not photoshopping! Your pregnancy is beautiful and so are the side effects,’ one commented.

Another said: ‘So inspirational, especially that you’re not photoshopping and putting makeup over your chest to hide veins or anything of the kind! Natural mum beauty is the best.’

And one said: ‘I love how you show and don’t edit your veins. You are flawless!’ The 24-year-old, originally from Sydney but now lives in London, has been sparking debate over her seemingly tiny baby bump in recent months (pictured at six months pregnant) 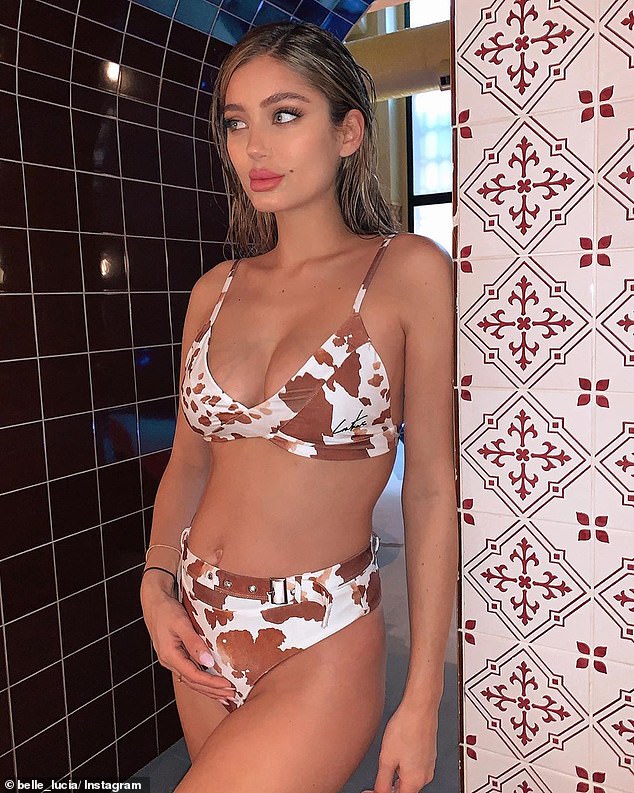 Her post comes as fans asked her the secret behind preventing ‘stretch marks’ during pregnancy.

‘But at the end of the day 80 per cent of pregnant women get them, it’s very natural! So just be happy you are able to carry a baby as lots of women struggle with infertility so stretch marks are the least of many women’s problems.’

Over the weekend, Belle revealed she gained a total of 10 kilos since falling pregnant.

‘Loving my pregnancy body, weight gain isn’t a negative thing! Don’t ever feel ashamed. Baby is roughly the size of a papaya and 36cms long,’ she said. 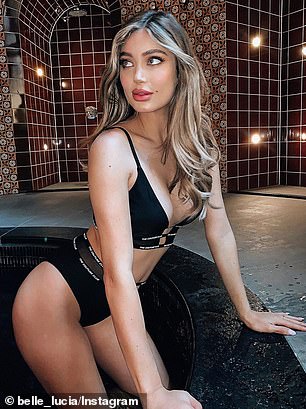 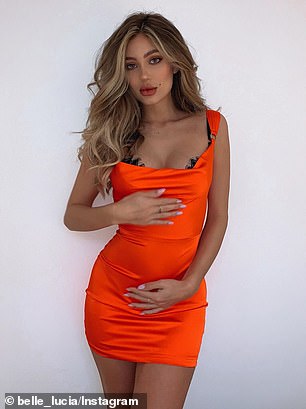 It comes just a week after Belle shared another bikini photo, this time in a black two-piece (left), that received similar disbelieving comments

Earlier this month, Belle was forced to defend the size of her growing belly after posting a sultry bikini snap on the beach – with hardly a baby bump in sight.

‘Beach and bump’ she captioned a photo of herself wearing a white bikini in Spain.

The comments from fans ranged from ‘Are you for real pregnant?’ to ‘If I didn’t read the caption, I would not have thought you were pregnant at all’.

‘This is my bump when not pregnant,’ one person said.

‘I just ate dinner and literally look like that,’ another added.

Belle was quick to tell everyone she’s ‘measuring big’ at this stage and she isn’t concerned about her appearance. 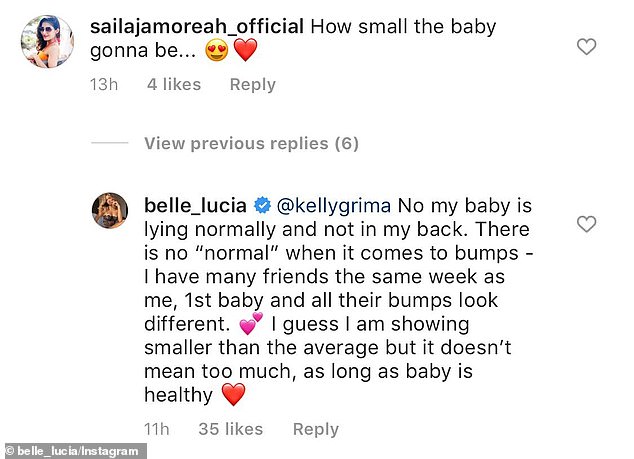 Belle, who is an avid reader of her comments, was quick to tell everyone she’s ‘measuring big’ at this stage and she isn’t concerned about her appearance

‘There is no ‘normal’ when it comes to bumps. I have many friends who are in the same week as me, it’s their first baby and all their bumps look different,’ she said.

‘I guess I am showing smaller than the average but it doesn’t mean too much, as long as baby is healthy.’

It comes just a week after Belle shared another bikini photo, this time in a black two-piece, that received similar disbelieving comments.

‘Maybe you’re not even pregnant,’ one person said.

Previously, Belle has shared a photo to prove that all woman carry a child differently.

‘Here’s more women the same week as me. As you can see women show very differently but are all carrying a little life,’ she said.

‘Just because I’m not showing as much as you like doesn’t mean my pregnancy is ‘unhealthy’ or that I’m promoting a ‘skinny’ pregnancy,’ she said.

‘It’s just my body and I can’t help if it doesn’t look the same as other women. Body shaming is not okay no matter how ‘big’ or ‘small’ someone is.’ 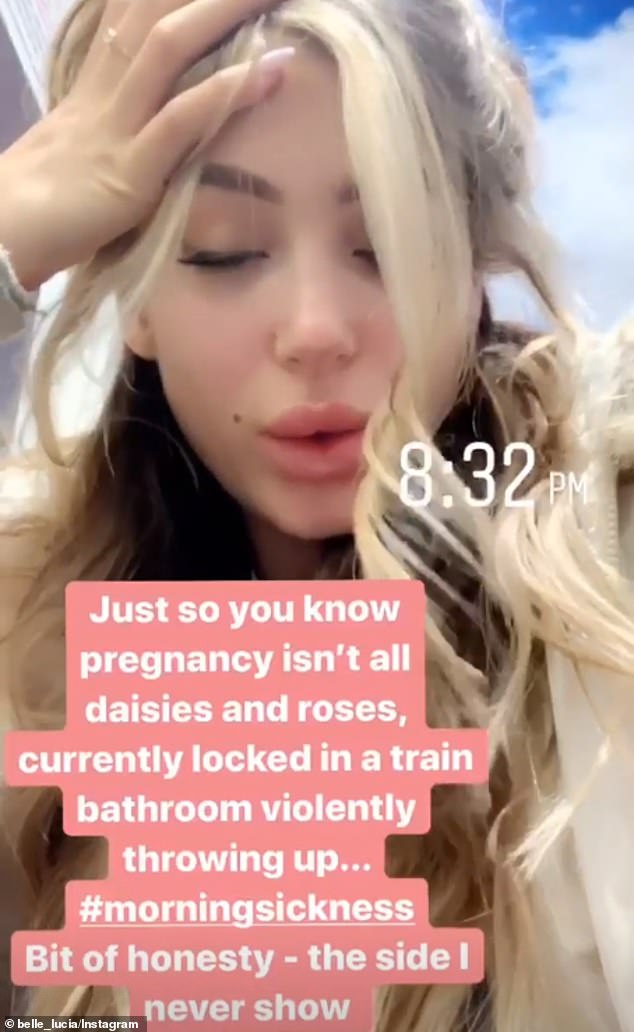 In a separate photo she addressed some of the more tedious side effects of growing a baby. 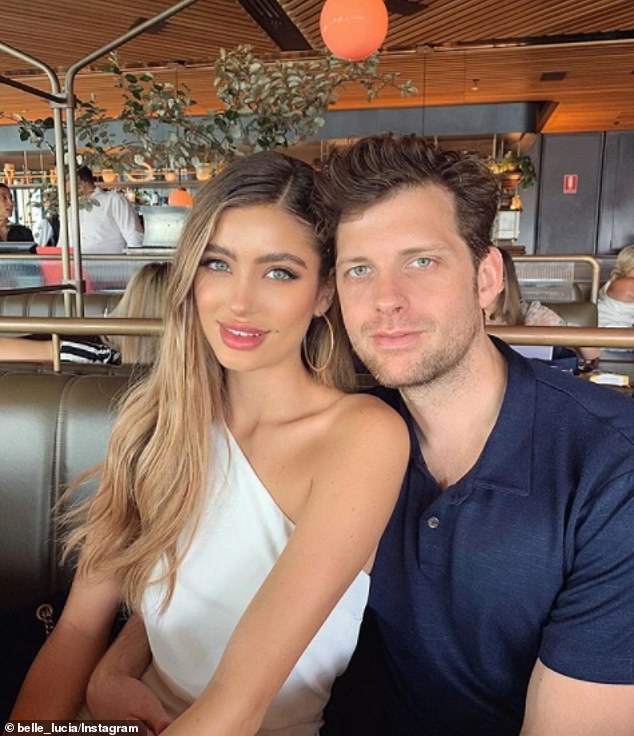 An Australian model and Instagram influencer has announced she’s four months pregnant (pictured), but was forced to delete an ultrasound video because of ‘rude and creepy’ people 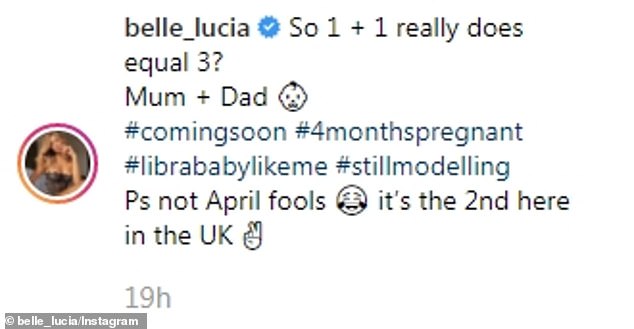 Belle Lucia, 24, who is currently in London but usually resides in Sydney, posted a sweet photo of herself with her boyfriend sharing the joyous news with her 1.3 million followers

Not everything has been smooth sailing for the young mother-to-be.

In a separate photo she addressed some of the more tedious side effects of growing a baby.

‘Don’t get me wrong, I did experience morning sickness and breast pain and definitely a lot of anxiety in the beginning because of the fear of miscarriage (I had no idea how common they were) but I’ve learnt to embrace everything – the downs and ups,’ she wrote.

In April Belle announced her pregnancy just after the 12 week mark.

‘So 1 + 1 really does equal 3? Mum + Dad #comingsoon #4monthspregnant #librababylikeme #stillmodelling P.s Not April fools. It’s the 2nd here in the UK,’ she captioned the image.

Belle decided to supplement her good news post by uploading an ultrasound video on her Instagram Stories, but deleted it shortly after.

‘Had to delete my ultrasound video because people were being rude and creepy,’ she said.

It was likely she was receiving inappropriate direct messages about the video, but these were not published online.