Housing and Urban Development Secretary Ben Carson found himself in a dessert disaster during a congressional hearing on Tuesday when he mistook an ‘REO’ – a Real Estate Owned foreclosure – for an Oreo cookie.

Carson, a world-renowned pediatric surgeon before he ran for president in 2016 and accepted a Trump administration job, faced questions before the House Financial Services Committee.

California Democratic Rep. Katie Porter asked him if he knew what an REO is.

‘An Oreo?’ he responded. 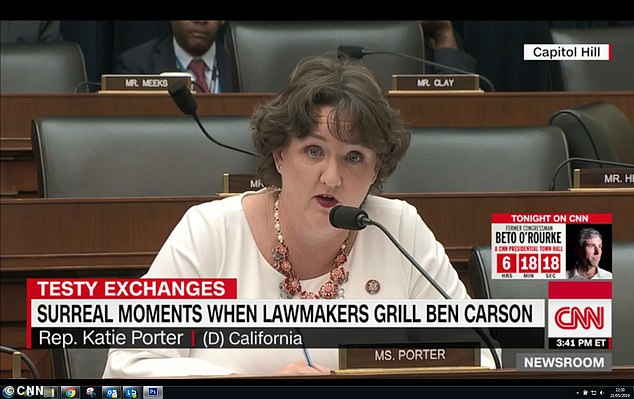 California Democratic Rep. Katie Porter, a former mortgage banking overseer with the California state government, had to explain to Carson that REOs are foreclosed properties that lenders end up owning because they fail to attract buyers at auction

Carson guessed correctly that the ‘R’ and ‘E’ stood for ‘real estate.’ But he thought the ‘O’ stook for ‘e-organization.’

An REO is a property that a bank or other lender owns once a foreclosure proceeding is over, but failed to sell at auction. If the Federal Housing Administration has guaranteed a delinquent loan, the U.S. government ends up holding the title.

Porter wanted information about why FHA loans are far more likely to end up as REOs than mortgages issued by Freddie Mac and Fannie Mae.

Many private lenders prefer to negotiate mortgage payments or pursue other alternatives to foreclosure, rather than seizing real estate and selling it to recoup costs. 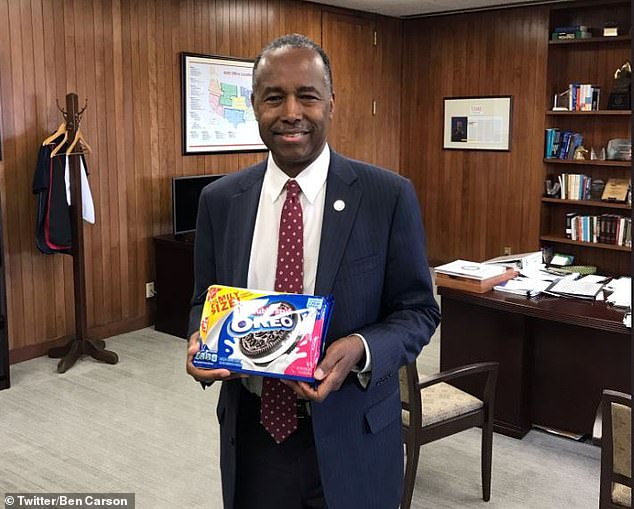 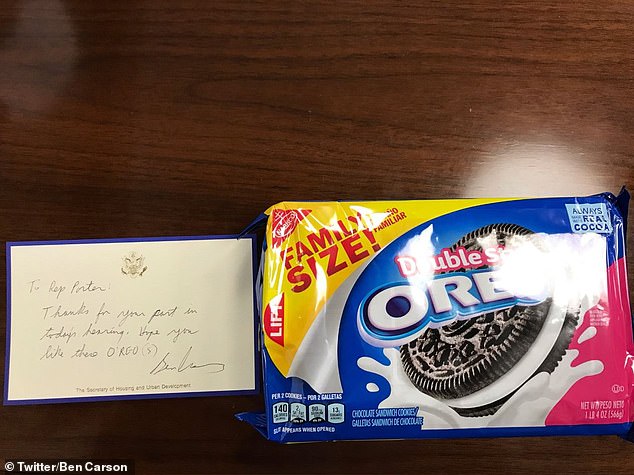 Carson tweeted these two photos, including a hand-written note to the congresswoman thanking her for her part in the hearing and offering her a package of ‘O-REO(s)’

Carson laughed off his inexperience with the basics of mortgage resolution procedures after the hearing with a tweeted photo of a package of Oreos.

‘OH, REO! Thanks, @RepKatiePorter,’ he tweeted. ‘Enjoying a few post-hearing snacks. Sending some your way!’

Along with a package of Double Stuf Oreo cookies, the attached photo showed a hand-written note to Porter.

‘Thanks for your part in today’s hearing,’ it read. ‘Hope you like the O’REO(s).’

As Porter questioned Carson during Tuesday’s hearing, he offered to connect her with HUD experts on home foreclosure.

‘Respectfully, that was my day job before I came to Congress,’ she responded, ‘so now it’s my job to ask you to work with people. I spent a decade working with the people at HUD on this problem.’

She told CNN hours later in an interview that Carson’s cookies did arrive at her office. 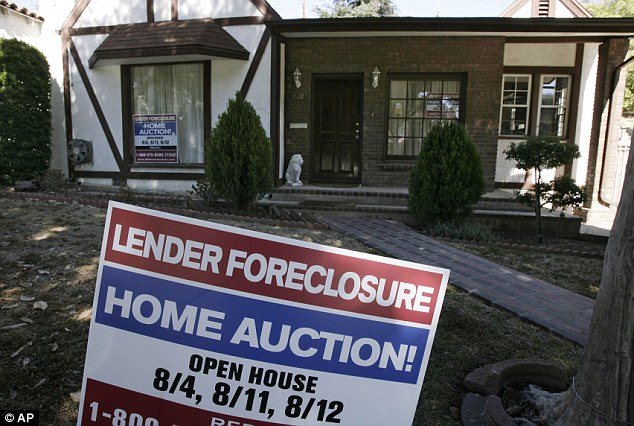 ‘He actually sent a family-size box of Double Stuf Oreos to our office,’ Porter said.

‘And while I was pleased to receive correspondence from him, what I’m really looking for is answers.’

HUD’s annual report to Congress from fiscal 2018 shows that nearly 32 per cent of the real estate the agency disposed of consisted of REO properties. That number was even higher, more than 42 per cent, a year earlier.