A new-look Ben Cousins appears happy and healthy, posing for photographs with fans at a park footy match in Perth as he overcomes his drug demons and gets his life back on track.

The fallen AFL star, 42, who has battled ice addiction for about two decades, was all smiles on Sunday, snapping selfies with die-hard fans that still remember just how good he was in his prime.

The one-time Brownlow Medalist is now playing park footy for the Queens Park Bulldogs in Perth and looks to have turned his life around after multiple run-ins with the law, a crippling drug addiction and numerous stints in jail.

A new-look Ben Cousins (pictured second right) appears happy and healthy, posing for photographs with fans at a park footy match in Perth. 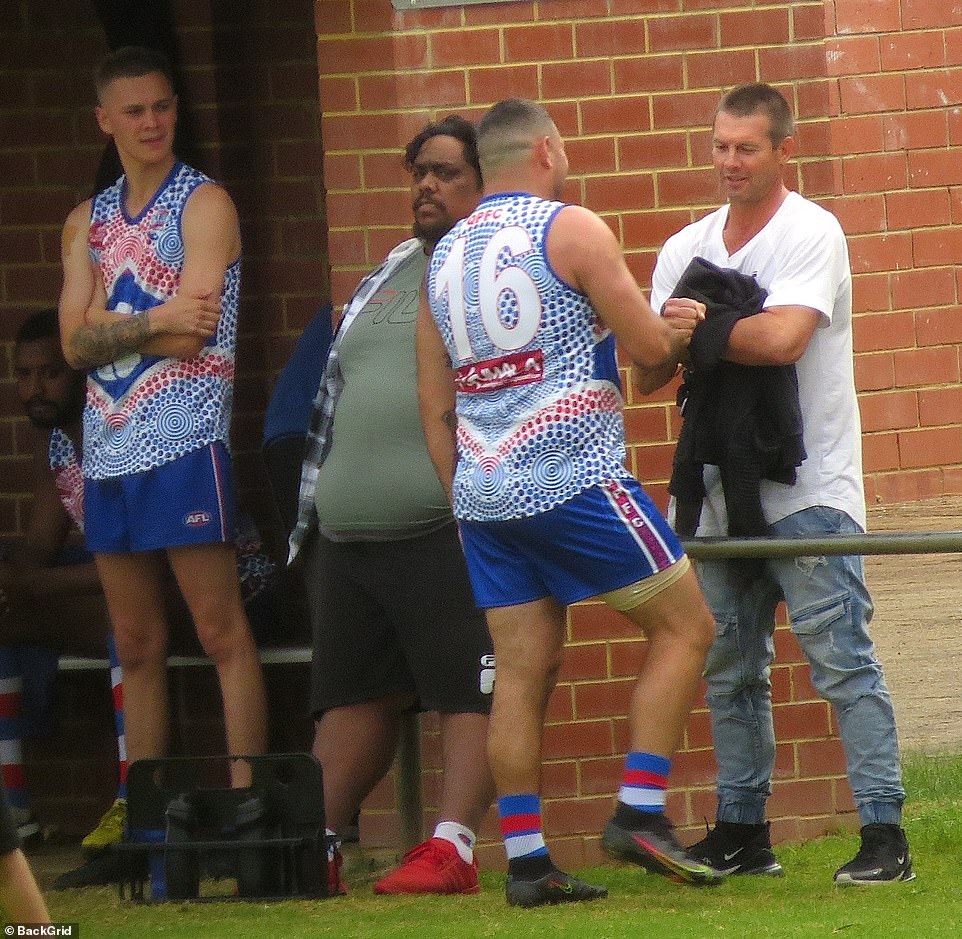 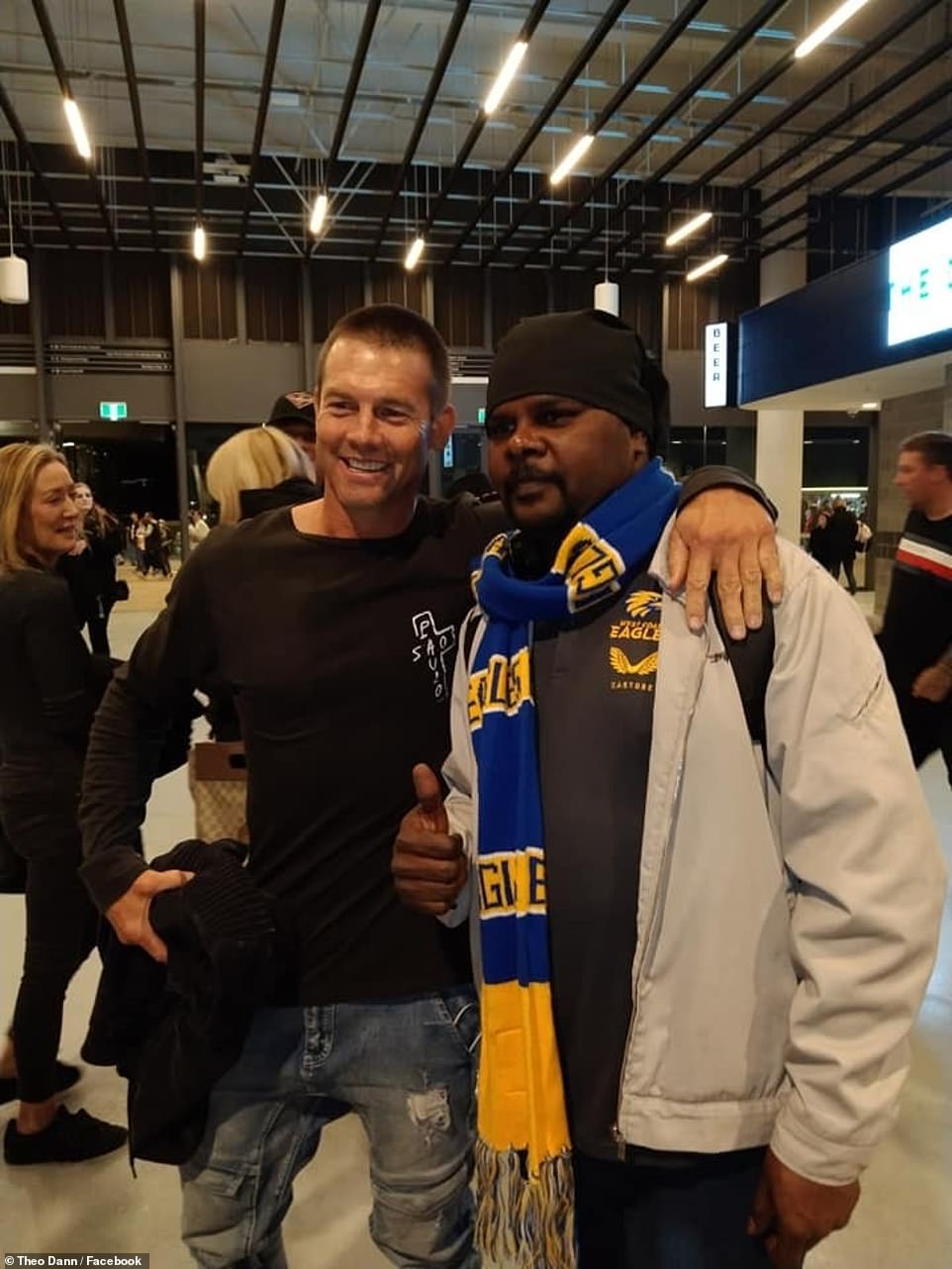 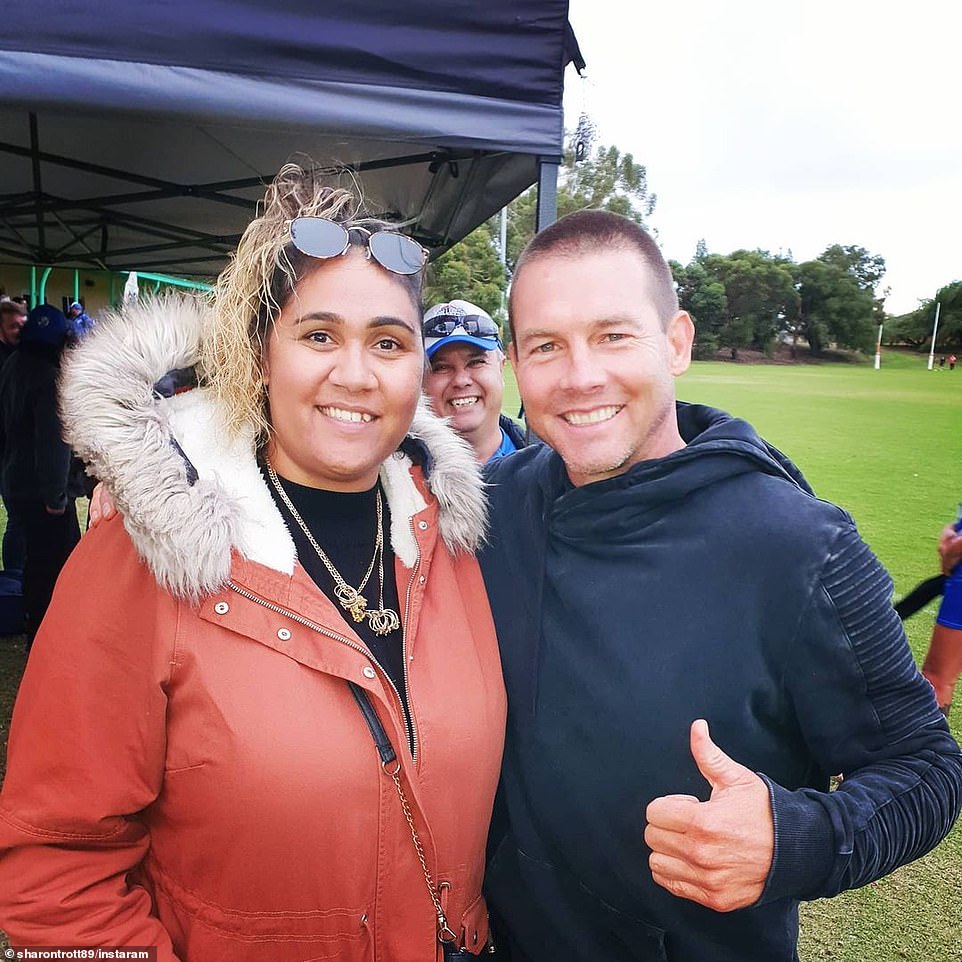 The fallen AFL star, 42, who has battled ice addiction for about two decades, was all smiles on Sunday, snapping selfies with die-hard fans that still remember just how good he was

He played his first match for the local club on May 16, impressing fans with three goal assists 11 years after he sensationally retired from the game in 2010.

But as Cousins overcomes his addiction battle, questions remain about the role of West Coast club officials who have been accused of turning a blind eye to the team’s rampant drug abuse.

A new book called The Boy’s Club by award-winning journalist Michael Warner, suggests blatant illicit drug use by senior players were swept under the rug for years.

The Eagles were flying high after winning the Grand Final against the Sydney Swans by a point in 2006, so most of the squad headed off to America’s adult playground – Las Vegas – in October that year. 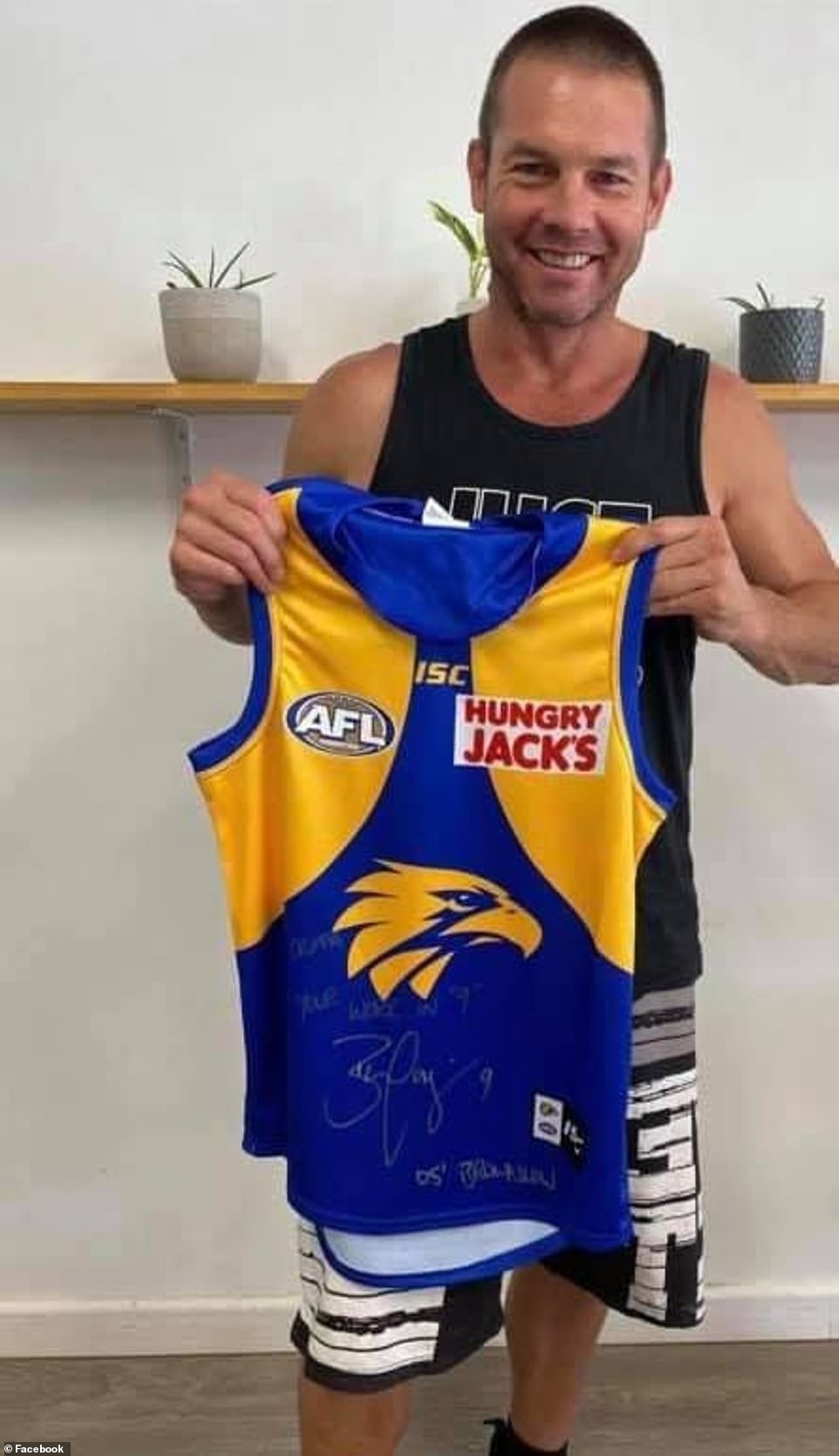 As Cousins overcomes his demons, questions remain about the role of West Coast club officials who have been accused of turning a blind eye to the team’s rampant drug abuse 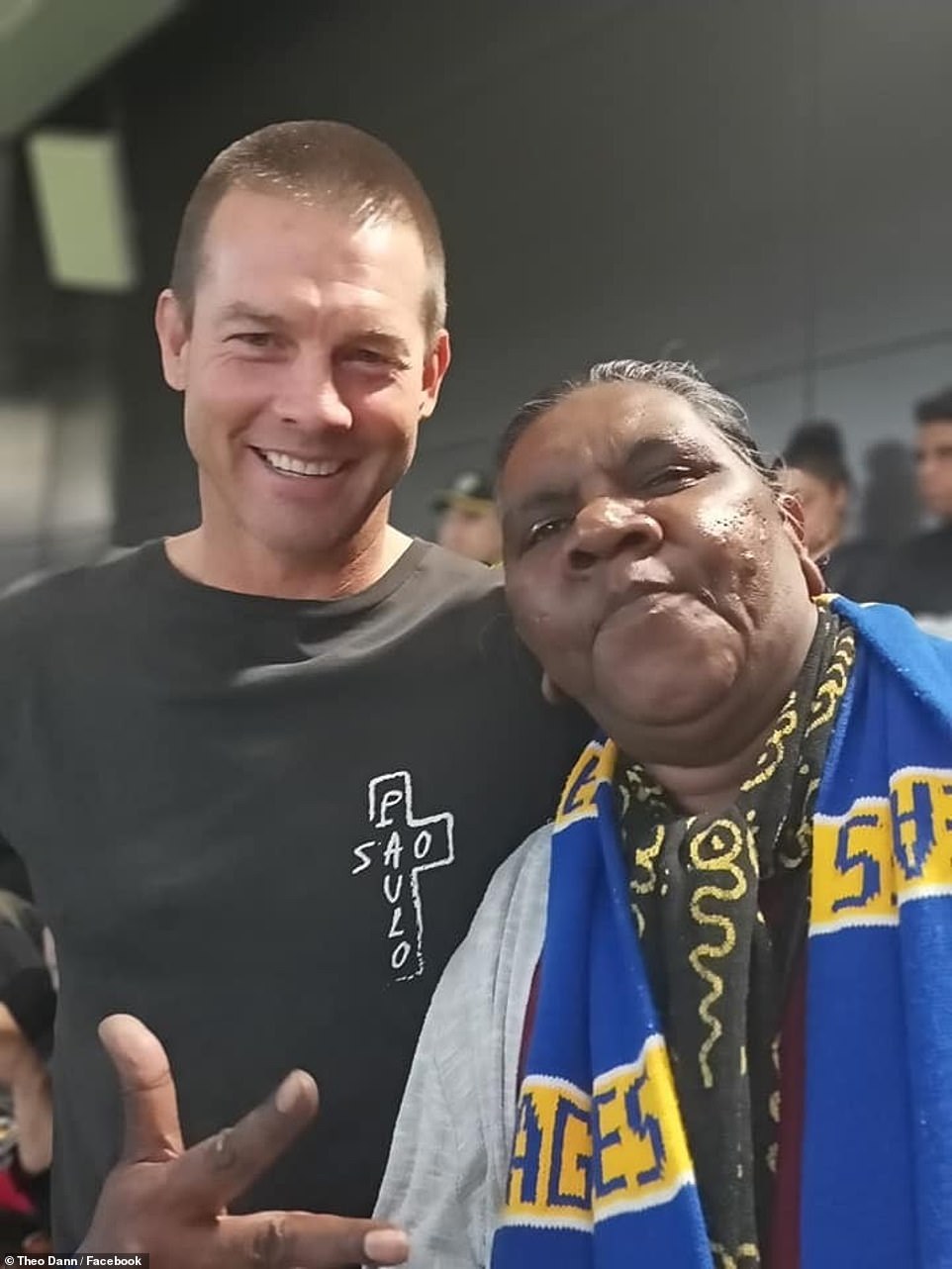 Fletcher ‘apparently collapsed’ outside the MGM Grand after returning from a nightclub.

Fletcher denied he had taken any drugs before the hospitalisation and it is not suggested any were taken.

According to Mr Gillard’s report, there were about 19 players and five club officials on the trip and although he interviewed a number of people, finding out what happened ‘has not been easy’.

‘Chad Fletcher himself says he has no real memory of what occurred,’ the report said. ‘He denied that he was taking any drugs’.

‘The official approach by the club is that they do not know what caused the illness and Fletcher will not produce his medical records’. 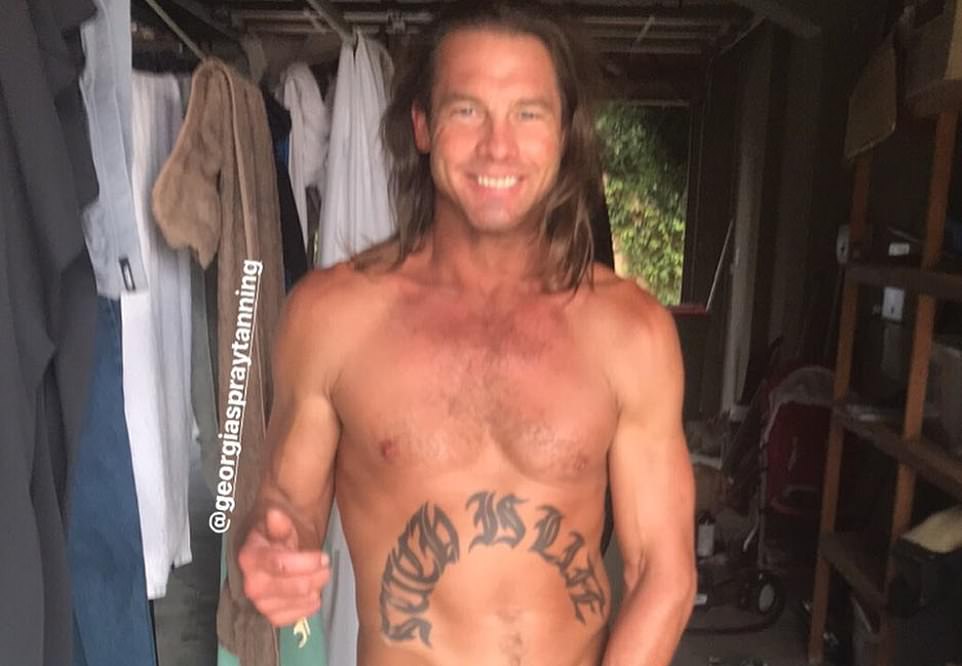 Cousins, the former West Coast Eagles captain has been plagued by drug addiction and legal issues since his retirement from AFL in 2010 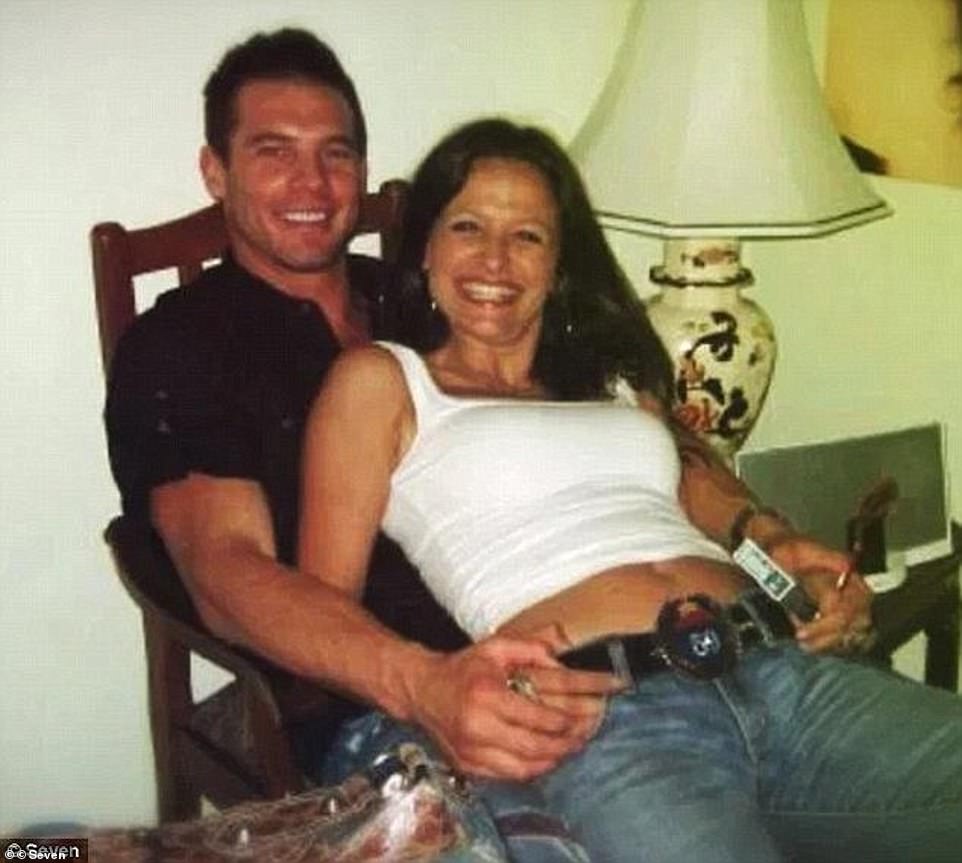 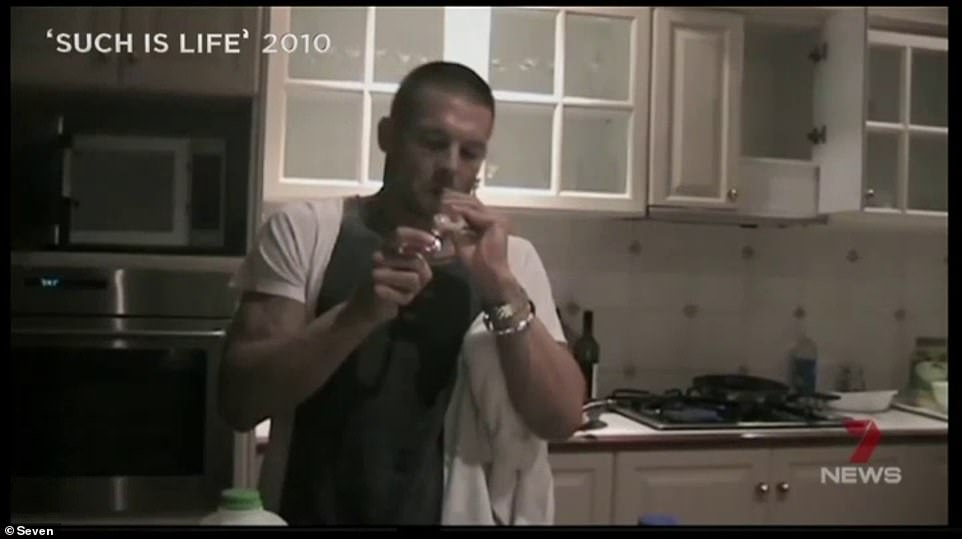 ‘It exemplifies the attitude which had persisted for some five years previously, and that was to ignore any suggestion of drug-taking,’ he said.

‘The official line was there was no evidence of drug-taking. But the circumstantial evidence cannot be ignored.’

For Cousins, the writing was on the wall months before Fletcher allegedly overdosed.

He quit as captain in February 2006 after he was found to have ditched his car and fled from the police after approaching a breath-testing station.

He lifted the premiership that same year and in December was found unresponsive on the streets of Melbourne.

A good Samaritan that tried to help Cousins told the Sunday Age at the time that the footballer was ‘sweating and paranoid’.

‘He had his hands over his face and was looking around as if he was frightened someone was chasing him,’ the witness said.

‘I think I can tell the difference between drunk and drugs and I’d say he was tripping out bad — his brain was fried on some hard-core stuff.’ 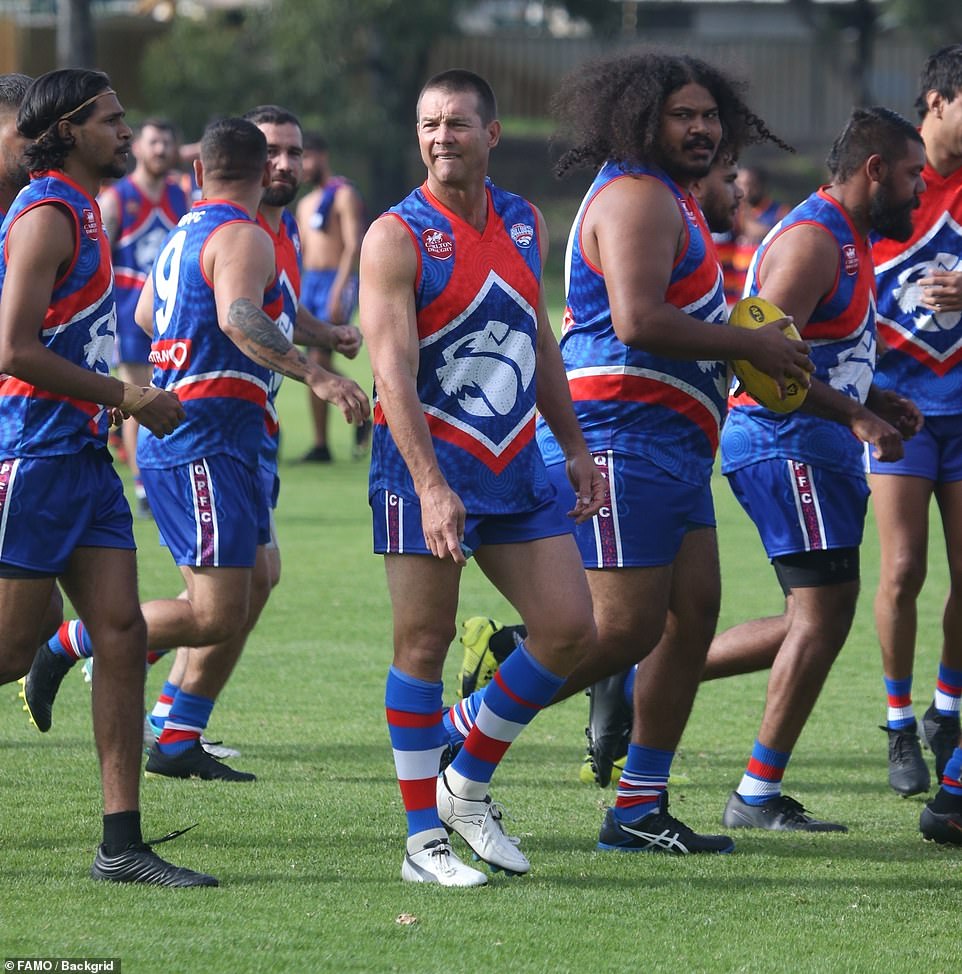 Cousins is pictured with his Queens Park Bulldogs teammates on Sunday. The club are Perth’s Metro Football League reigning premiers 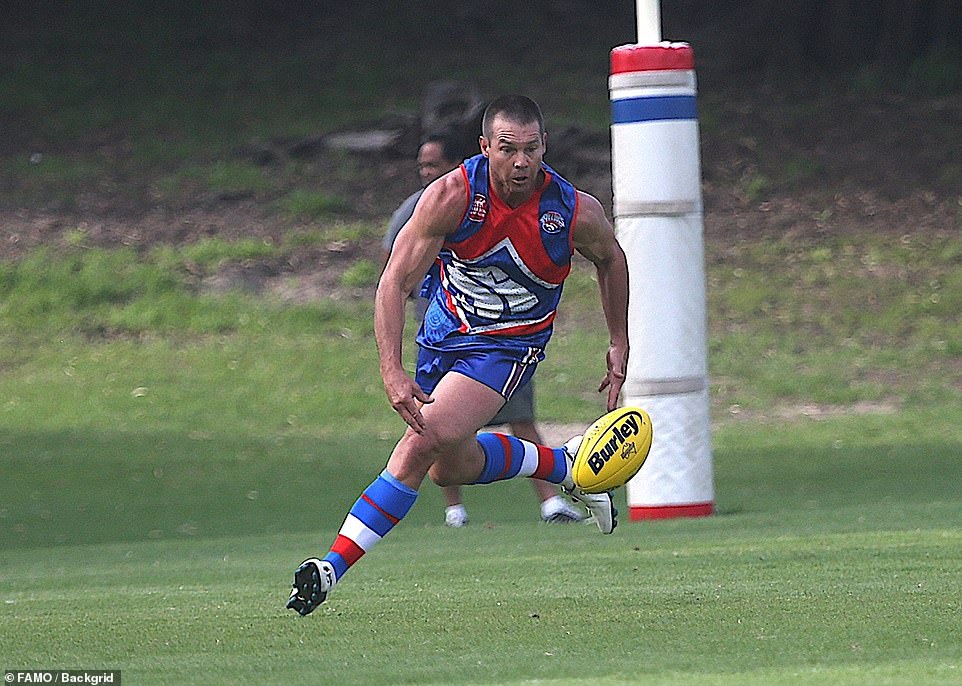 Cousins (pictured) helped guide his Queens Park Bulldogs side to a 40-point victory, setting up one goal and kicking one of his own 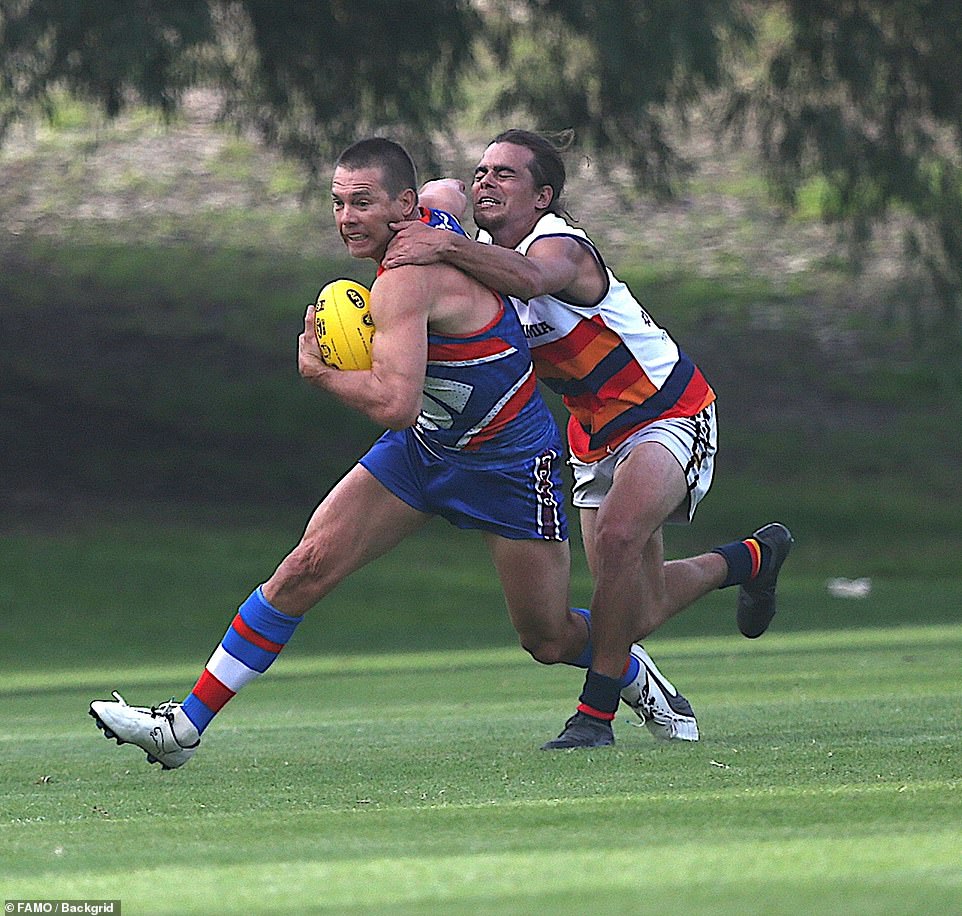 Cousins, who previously opened-up about how he went from 2005 Brownlow Medal winner to homeless drug addict, appeared in peak physical fitness

Cousins was eventually let go from the club in October 2007 after he was arrested for drug possession and refused to give a blood test.

That same month former West Eagles skipper Chris Mainwaring was found dead of cocaine overdose, with a coroner’s report later finding that Cousins had visited the 201-game veteran twice on the day he died.

Gillard said coach John Worsfold was told by at least three fairly reliable sources in 2002 that some players were taking illicit drugs and were mixing with undesirable persons and could get themselves into trouble.

Among the names mentioned was Ben Cousins.

‘They were spoken to by the coach, and the players responded that there was nothing to worry about.’

Although Gillard’s report was damning, no action was ever taken against club officials as the findings were only permitted to recommend punishment for incidents that took place after 2007 when the drug saga had mostly resided. 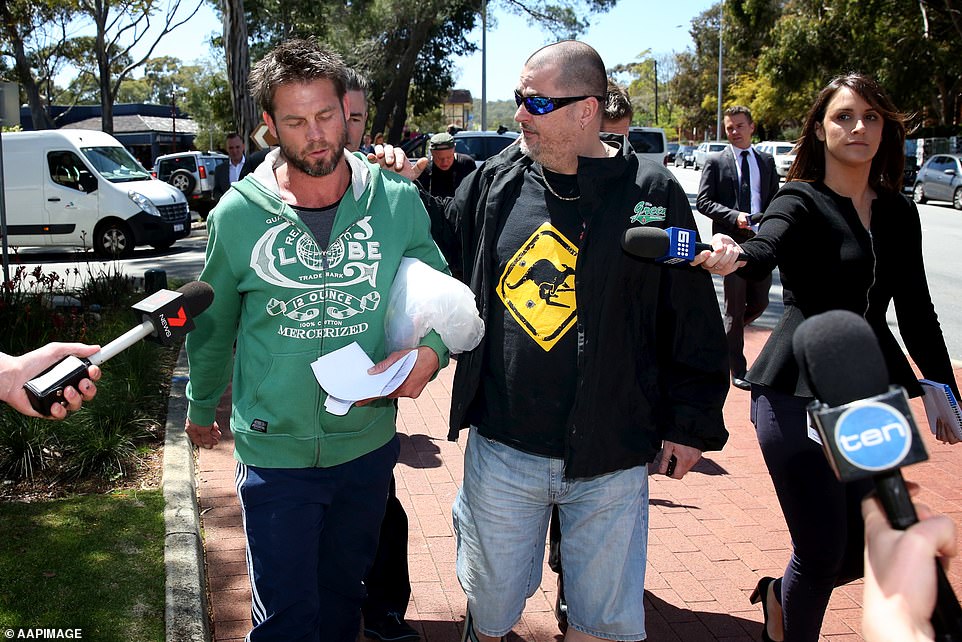 It marks the first time Cousins has returned to the field since retiring in 2010, overcoming a drug addiction and spending time in jail over possession of methamphetamine 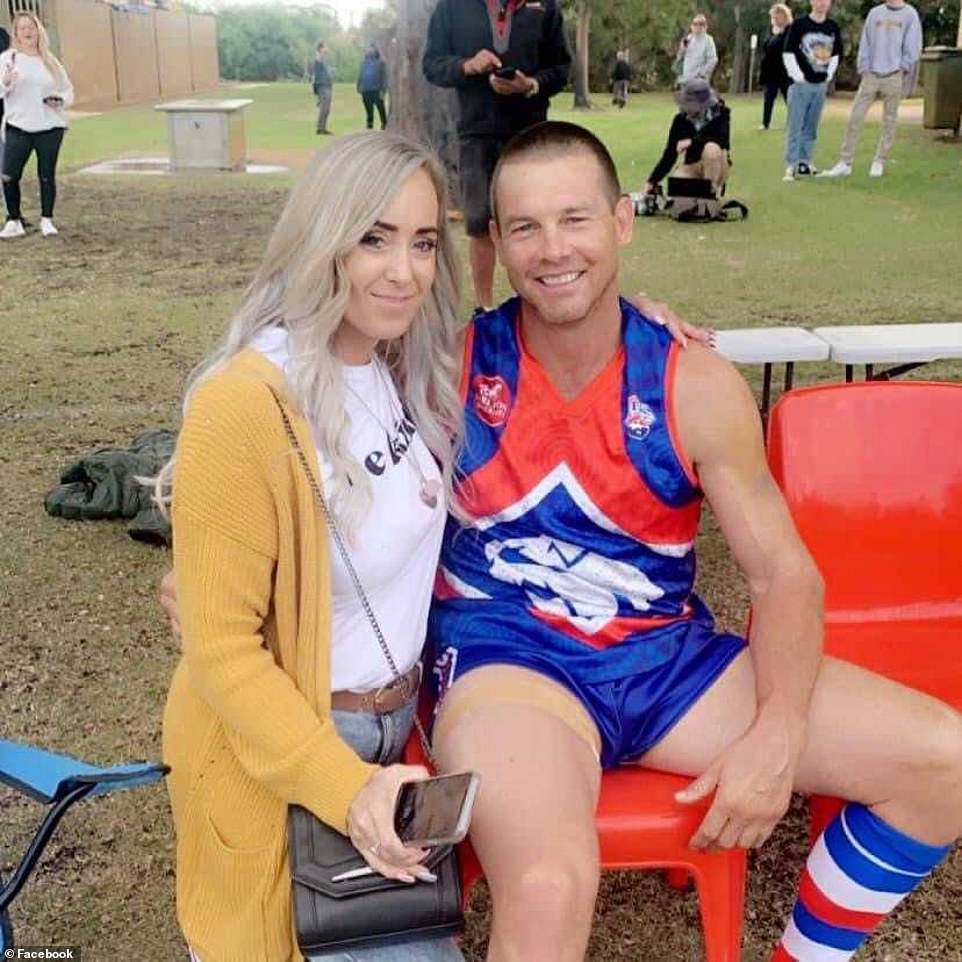 He is remanded in custody after pleading guilty to possessing methamphetamine and incurring a $1500 fine.

He is also charged with aggravated stalking of his ex-partner, Maylea Tinecheff.

(October) Cousins pleads not guilty to aggravated stalking and 20 counts of breaching a family violence restraining order relating to his ex-partner.

(November) He is convicted of stalking his ex-partner but acquitted by a Perth court of restraining order breaches.  He is sentenced to seven months jail, which is backdated to April.

He is released from Hakea prison in late November.