Ben Miller still shudders as he remembers the moment he was caught cheating with a new partner. He was walking through London’s Chelsea, arms full of comedy props when he and his new partner bumped into the last person they expected to see.

‘Oh, this is such a shameful story,’ admits Ben of that embarrassing afternoon.

‘But I’d been to see Alexander Armstrong and his comedy partner David Wolstencroft perform a few months earlier and it changed everything. I fell in comedy love basically. So I started sending Xander [his friends call him Xander] little sketches that were a bit like love letters. Then we got together in private to come up with an act.

‘One afternoon we booked this rehearsal room on the King’s Road and we went out to buy some comedy props. I had my arms full and right on the top was a large rubber chicken.

‘And then – unbelievably – we bumped into David. He said, “Hi guys, what’s going on?” and we tried to pretend we were just going for coffee. David said, “And what’s with the rubber chicken?” We laughed and said we thought it might come in handy. There was a long pause, then he said, “OK, well, good to see you…”’

It turned out Alexander hadn’t yet broken the news to his partner that he was leaving him for another man.

‘It was like being caught in bed with someone by your husband or wife,’ admits Ben with his head in his hands as he recalls it all over Zoom from his Gloucester home.

‘I still feel awful about it. David sort of had the last laugh though when he wrote a TV show called Spooks that became a soaring global franchise making millions of pounds.’

Several decades later, with a hugely successful career as a double act including award-winning series The Armstrong & Miller Show (which can now be seen on BritBox) under their belts, Alexander and Ben decided to go their separate ways, although they still do podcast Timeghost. But Ben says it feels a little odd that Xander now has a new man in his life, his Pointless co-host Richard Osman.

‘I went on Pointless as a contestant and it was strange seeing them together,’ he says. ‘But it’s different. If he were to do a sketch show with someone else I’d probably track him down and kill him, or at least turn up at their shows and cause a scene. It would be devastating.’

Ben, 55, and Alexander, 51, were at Cambridge together, part of an extraordinary Footlights cohort in terms of how successful so many of them have been.

Ben’s girlfriend there was Oscar-winner Rachel Weisz – they had met through David Farr, writer of The Night Manager. Ben recalls it as, ‘a fun time, but goodness me, I don’t know how I ended up with her. I wish I knew my secret.’ 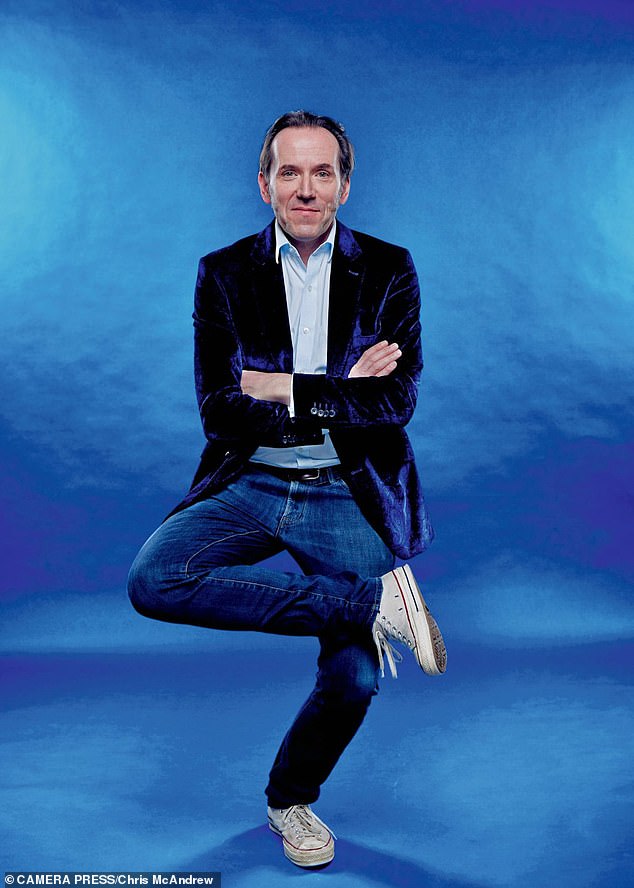 Incredibly for Ben, filming this series took him back to the exact house in Cambridge where he started writing comedy before he quit his PhD in solid state physics to start his acting career

One of Ben’s good friends was award-winning playwright Jez Butterworth, while other contemporaries included the former Bake Off duo Sue Perkins and Mel Giedroyc, Ali G creator Sacha Baron Cohen and journalist Emily Maitlis. Yet Ben had only heard of, rather than met, Alexander. ‘He’d been in a play written by David called A Watermelon Killed My Daughter, and apparently he couldn’t stop laughing but was very funny.’

A self-confessed science geek, Ben discovered a different side to himself when he started acting at university, so he took a gamble and quit his PhD in solid state physics.

I packed in my PhD by writing a Post-it note

‘One job I had as a graduate student was working with a team inventing a new security gate for supermarkets,’ he says. ‘One night I was in the lab at 11pm measuring the electrical field of some magnets, centimetre by centimetre. I’d done it 100 times when I finally thought, “I’m leaving and never coming back.” I wrote that on a Post-it note, stuck it on the gate and never went back.’

Ben’s parents, both academics, were appalled. ‘I think they thought I’d lost my mind,’ he recalls. ‘They tried to confront me about the idiocy of it all. Xander’s mum had taken me to task one night after we performed in a sweaty pub, asking, “Now young man, is this a realistic prospect?”’ 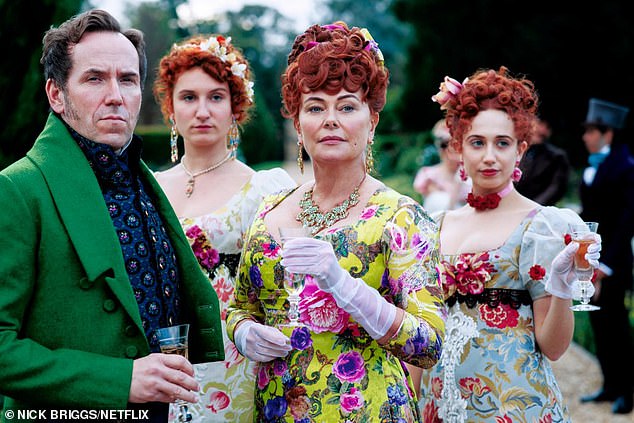 At first it appeared to be anything but. In 1994 the pair went to the Edinburgh Festival to perform for the first time but they bombed. Ben can even quote the review in Time Out magazine: ‘Armstrong and Miller have invented a new kind of comedy; one that has no jokes and isn’t funny.’

And he heard Janet Street-Porter, then a TV executive, loudly saying, ‘Those two will get a sketch show over my dead body.’

Ben appeared in Bridgerton as Lord Featherington, whose gambling habit ruined his family and led to his death. Yet he didn’t have a single line for the first half of the recent eight-part series – he simply sat there, brooding.

‘My friends would text me after each episode and say, “Great newspaper rustling Ben”. But I knew what the pay-off was going to be. I’ve always wanted to play a character who doesn’t speak – it can be such a powerful thing.’

When I ask if he’s sad he won’t be back, he reminds me that Featherington’s corpse was never actually seen. He’s already returned to Death In Paradise as a ghost… will Ben Miller rise from the dead again?

But they persevered, and their second trip to Edinburgh two years later was a triumph. Paramount Channel offered them a TV series, Armstrong & Miller, which moved to Channel 4.

They were then lured to BBC1 where it became The Armstrong & Miller Show. The series still feels utterly modern, a reminder of how brilliant a good sketch show can be.

‘That year I remember my dad coming to London and taking me out for dinner,’ says Ben. ‘He said, “We were trying to give you the best advice but you obviously made the right call.”’

But the work was relentless and in 2010 the duo agreed to go solo. While Alexander went on to make Pointless, Ben won the role of DI Richard Poole on Death In Paradise (also on BritBox), about a fish-out-of-water British detective working in the Caribbean.

Writer Robert Thorogood said he immediately thought of Ben because, ‘No one can touch him for doing uptight, angst-ridden, British, middle-class neurosis.’

Ben agrees that the role wasn’t a huge stretch. ‘Yes, I have the same difficulties, the awkwardness, that he has.’

The show was a hit but Ben left after three series because filming in Guadeloupe meant too much time away from his family. Although Richard was killed off, Ben went back last year to film for the show’s 10th anniversary, as his ghost. ‘It was the first time I really got to appreciate how breathtakingly beautiful the island is,’ he says. ‘It’s an amazing place to travel around. It was brilliant to be able to go back.’

Ben can now be seen on BritBox with Frances de la Tour in new crime drama Professor T, based on a hit Belgian show, before it heads to ITV.

Ben plays Professor Jasper Tempest, a genius Cambridge criminologist with OCD who unwittingly becomes a police advisor. ‘I play an uptight, angsty man – so completely against type,’ he laughs. ‘There’s a different story each episode and his backstory makes you realise he maybe shouldn’t be trusted.’

Incredibly for Ben, the series took him back to the exact house in Cambridge where he started writing comedy.

‘Professor T’s house is the very same one where I wrote my first sketches with a friend who lived there. It’s amazing to think about what’s happened to me since.’

The Armstrong & Miller Show, Death In Paradise and Professor T can all be seen on BritBox.