The man who won two Super Bowls for the city of Pittsburgh says that he now regrets the fact that he and his Steelers teammates refused to stand on the field for the national anthem during Sunday’s game.

‘I was unable to sleep last night and want to share my thoughts and feelings on our team’s decision to remain in the tunnel for the National Anthem yesterday,’ said Ben Roethlisberger in a statement.

‘The idea was to be unified as a team when so much attention is paid to things dividing our country, but I wish we approached it differently. We did not want to appear divided on the sideline with some standing and some kneeling or sitting.’

He closed out by saying: ‘I appreciate the unique diversity in my team and throughout the league and completely support the call for social change and the pursuit of true equality.

‘Moving forward, I hope standing for the Anthem shows solidarity as a nation, that we stand united in respect for the people on the front lines protecting our freedom and keeping us safe. God bless those men and women.’

He also spoke on Monday during practice in Pittsburgh and confirmed that the Steelers will not skip the anthem again this season.

Regrets, he’s had a few: Pittsburgh Steelers quarterback Ben Roethlisberger (above) said that he was upset with the team’s decision to skip the national anthem on Sunday 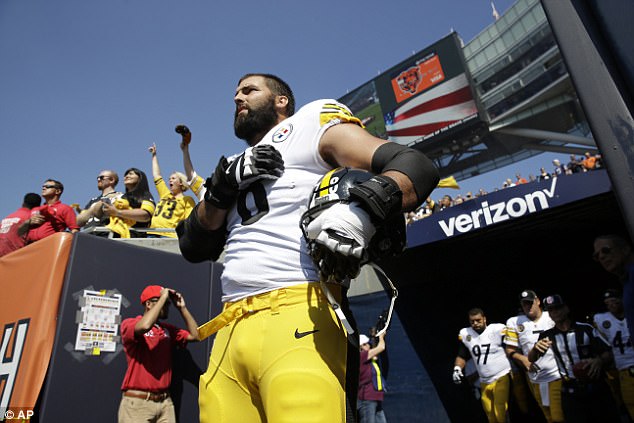 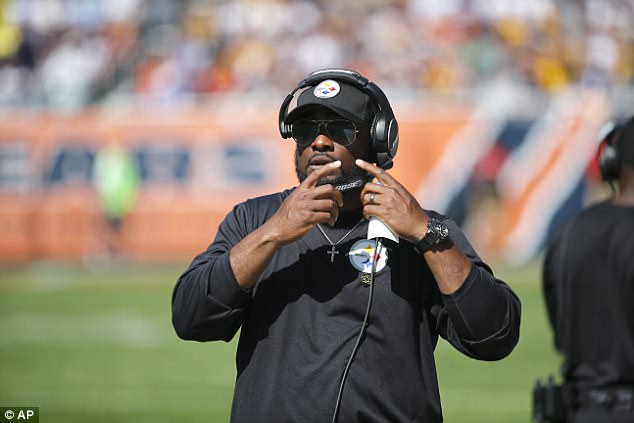 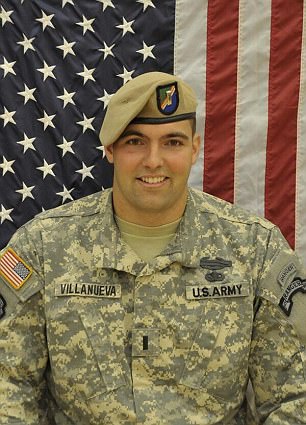 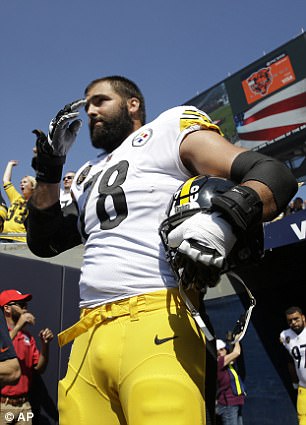 Villanueva, who was an Army Ranger (left) and served in Afghanistan, was the only player on the active squad that could be seen by the crowd 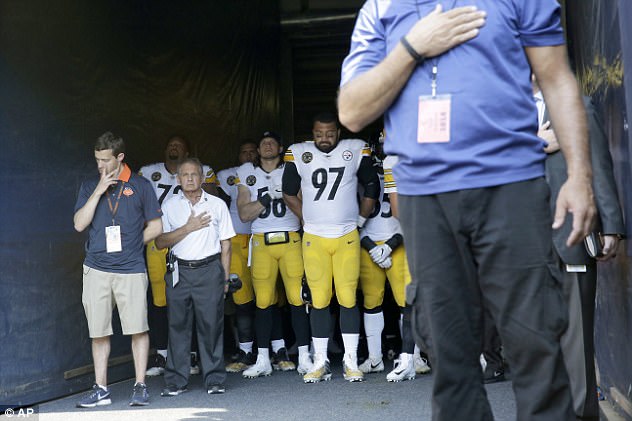 Army veteran and lineman Alejandro Villanueva, 29, was the lone holdout and took a tongue lashing from head coach Mike Tomlin after he decided to take part in the pre-game national anthem ceremony on Sunday while the rest of his team remained out of sight in the locker room.

‘Like I said, I was looking for 100 per cent participation, we were gonna be respectful of our football team,’ Tomlin said following his team’s 23-17 loss to the Chicago Bears.

Left tackle Villanueva, who served three tours in Afghanistan as an Army Ranger, stood at the edge of the end zone at Chicago’s Soldier Field with his hand over his heart as the Star Spangled Banner was performed.

His teammates, who were surprised by Villanueva’s actions, remained either in the locker room or stood near the tunnel out of sight of the crowd.

But Villanueva, who was an Army Ranger and West Point graduate, was the only player on the active squad that could be seen by the crowd.

And overnight, that decision made an impressive impact on the athlete’s jersey sales as fans rallied to his side by way of the NFL marketplace.

Villanueva jerseys were the No. 1 seller in the men’s and women’s categories on both Fanatics.com and NFLshop.com. It’s the No. 2 youth jersey on both sites.

The lineman’s jersey sales mirror that of Colin Kaepernick, whose jersey became the No. 1 seller for the San Francisco 49ers after his protests against the anthem began in 2016.

After the game, Tomlin said that many of the players ‘felt like something needed to be done’.

‘I asked those guys to discuss it and whatever they discussed that we have 100 per cent participation or we do nothing,’ Tomlin said.

Before the game, Tomlin had told CBS Sports that the team would not stand on the sidelines for the anthem as they usually did.

He said the team held a meeting and decided not to come out of the locker room for the anthem.

Tomlin noted the decision wasn’t unanimous, but the intent was to have his team focus on the game and not President Donald Trump’s comments about players who chose to protest during the anthem.

‘We’re not going to play politics,’ Tomlin said. ‘We’re football players, we’re football coaches. We’re not participating in the anthem today – not to be disrespectful to the anthem, but to remove ourselves from the circumstance.’

He added: ‘People shouldn’t have to choose. If a guy wants to go about his normal business and participate in the anthem, he shouldn’t be forced to choose sides.

Villanueva was a key member of the team’s protest planning ahead of Sunday’s game, a source told ESPN.

Players wanted to accommodate Villanueva, who expressed that he didn’t want to be singled out for wanting to stand during the anthem. 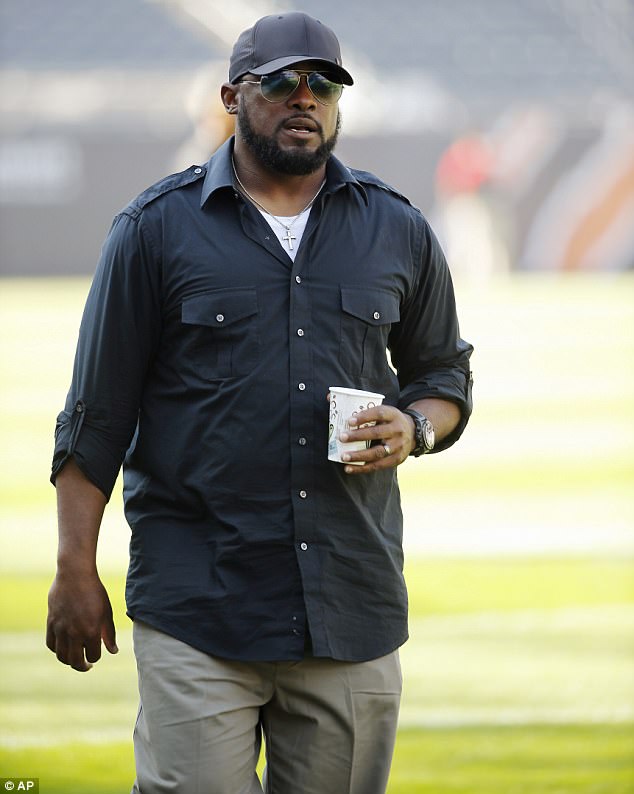 ‘Like I said, I was looking for 100 per cent participation, we were gonna be respectful of our football team,’ Tomlin (pictured) said following his team’s 23-17 loss to the Chicago Bears 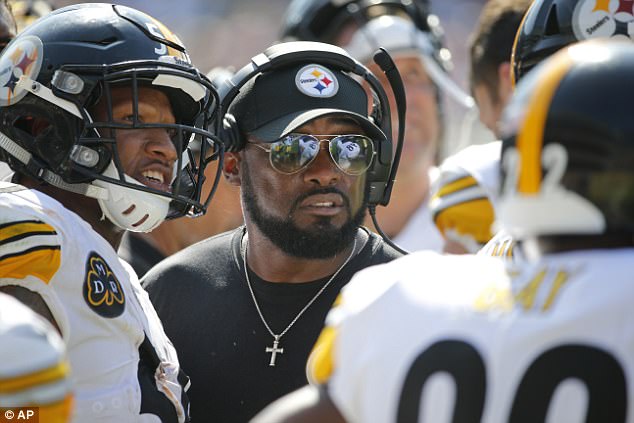 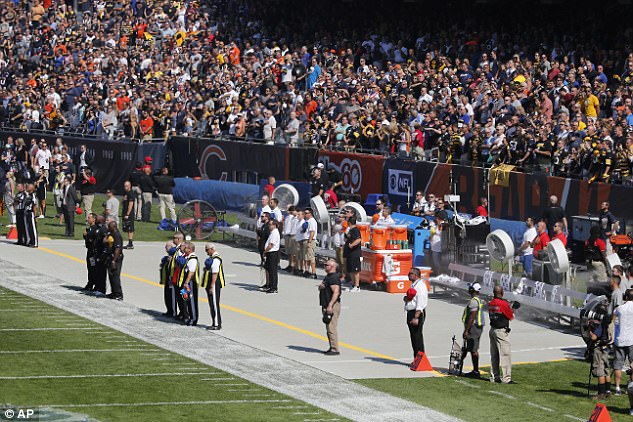 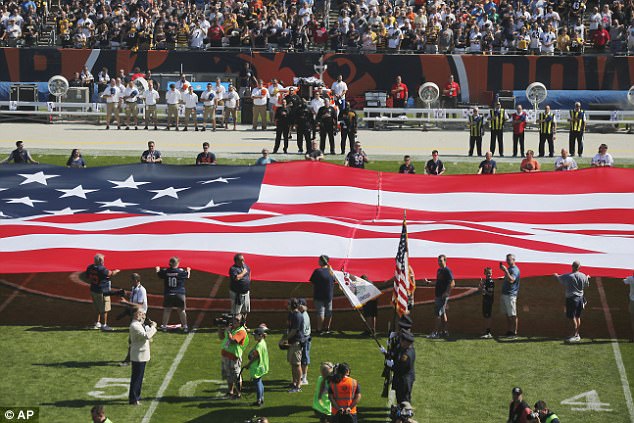 The team decided that moving the protest off the field and out of sight of the crowd was a way to keep solidarity – those who wanted to stand could still stand inside the tunnel.

Linebacker James Harrison told Penn Live that everyone was involved in the pregame plan to remain out of sight of the crowd.

‘We thought we were all in attention with the same agreement, obviously,’ Harrison said. ‘But I guess we weren’t.’

Villanueva has previously said he supported players’ frustration over racial injustice, but he didn’t want to overlook the anthem because of his time in the military, where he earned a bronze star for valor during his tours overseas.

Several people took to social media to praise Villanueva for his decision to stand near the field during the pregame national anthem, including Lara Trump.

‘Kudos to this incredible American. Thank you for your service & respecting our flag, sir. (sic) (Only #Steeler to come out for nat’l anthem),’ the president’s daughter-in-law tweeted.

Others called the Steelers a ‘disgrace’ for not taking part with Villanueva, despite their move to stay out of sight to remain out of the protest narrative.

Teammates said on Sunday that they respected Villanueva’s decision. 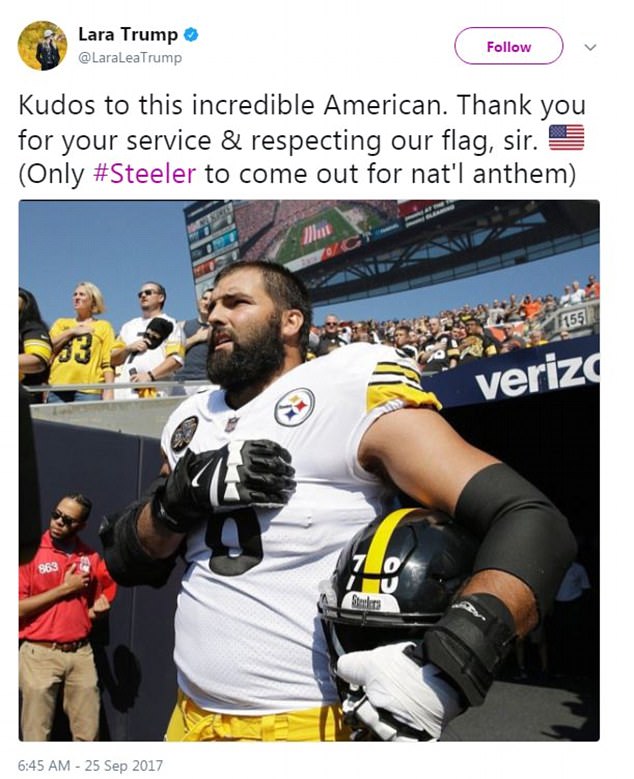 Several people took to social media to praise Villanueva for his decision to stand near the field during the pregame national anthem, including Lara Trump 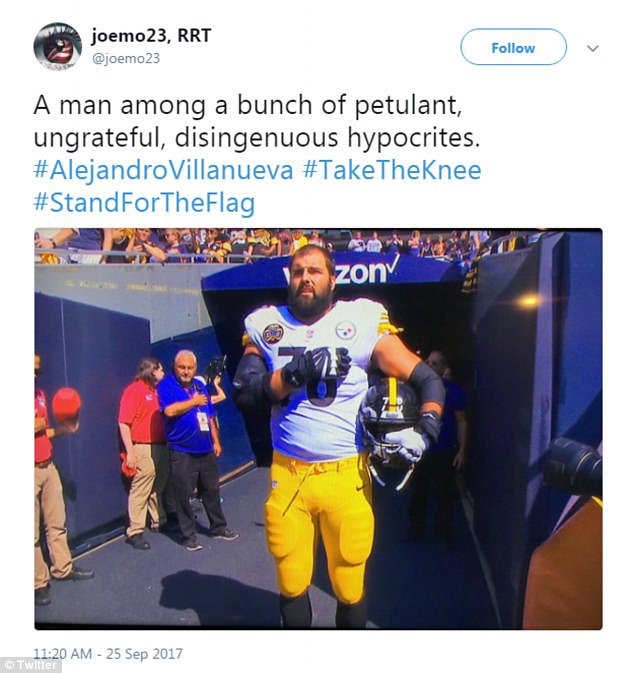 ‘Al is a unique circumstance, what he’s been through, some of the things he’s talked about before,’ guard David DeCastro said. ‘I’ve got a lot of respect for Al. I

‘ wish there was a different way to do this thing. We’ve got some people who look at the national anthem as patriotism, soldiers, all the stuff that it means, and obviously, people are upset, and I understand that.

‘I just wish both sides understand that they want the right thing, but doing it through the national anthem, I wish there was a different way.’

Defensive end Cam Heyward said: ‘I don’t want to go into that, but we support our guy Al. He feels he had to do it. This guy served our country, and we thank him for it.’

In 2014, Villanueva, then a member of the Philadelphia Eagles, told CBS News’ Don Dahler why he joined the Army.

‘I just couldn’t stand by the sidelines and watch other people do the work,’ he said.

A year later in 2015, Villanueva married his wife Madelyn.

More than 200 NFL players who either knelt, sat, stretched or prayed during the Star Spangled Banner to protest Trump’s remarks on Sunday.

Three teams didn’t even take the field until the national anthem was over. 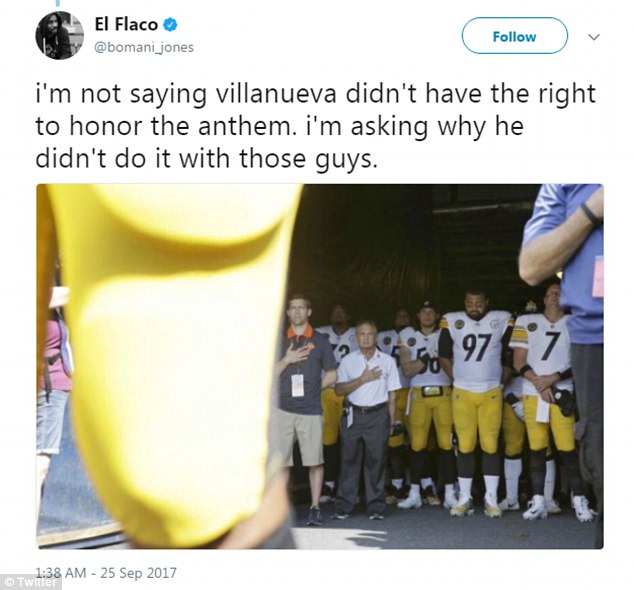 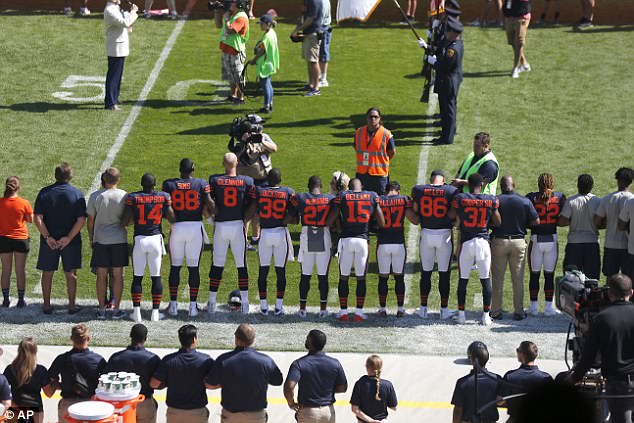 Meanwhile, the Chicago Bears stood together with linked arms as the national anthem played at Soldier Field on Sunday

Several players raised their fists during the protest, while others did so after scoring touchdowns during the game.

But Trump’s weekend attack on athletes sparked angry reactions from around the sports world and drew defiance from most of the NFL.

He suggested the NFL was going soft for cracking down on big hits. He uninvited the NBA champions Golden State Warriors to the White House after Stephen Curry and other players indicated they weren’t sure they would accept the invitation.

Players, owners and commissioners past and present chastised the president for his divisive remarks.

After calling for NFL players who protest to be fired, Trump tweeted Sunday that the league should make it mandatory to stand for the national anthem and that fans should shun anyone who doesn’t.