He’s been busy on the promotional circuit, thanks to his role as Doctor Strange in the highly-anticipated epic superhero movie Avengers: Infinity War.

But Benedict Cumberbatch’s stop on Ellen DeGeneres’s eponymous chat show didn’t go as smoothly as he’d hoped, when he ended up yelling the word ‘f**k’ twice after the host pulled a terrifying prank on him in the midst of his interview.

As the 41-year-old actor confessed to Ellen, 60, that he scares ‘very easily’, he was left spitting out expletives after a crew member dressed in full Iron Man costume jumped out a box next to him and roared, before running off backstage.

Prank: Benedict Cumberbatch swore twice during a daytime TV interview when chat show host Ellen DeGeneres terrified him with an Iron Man prank in the midst of their conversation

‘Ah, f**k off!’ Benedict yelled in reaction, as he placed his hands over his face in shock, before putting his head in his lap on realising it was just a prank.

Amid raucous laughter from the studio audience and Ellen, the visibly shaken reiterated his feelings as he said, ‘Oh f**k,’ while tightly clutching his chest.

Referring to his Avengers co-star Robert Downey Jr., who plays Iron Man, the British actor quipped: ‘Robert you’ve got to stop doing that! It’s getting tired, but clearly not on me. Wow.’ 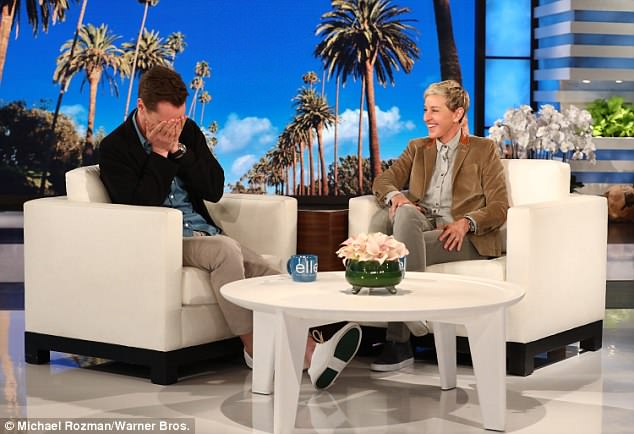 shocked: After the crew member ran off, a shocked Benedict sat with his head in his hands 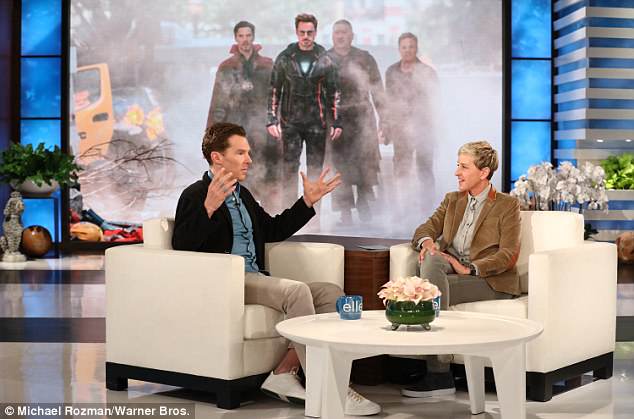 Movie: During his appearance, he discussed his epic superhero movie Avengers: Infinity War

As he recovered, he said to Ellen: ‘Good, I am still alive. This isn’t Heaven, although it would be nice to be in heaven with you.. Thank Christ for that.’

Suspecting that another prank was on the horizon, the father-of-two peered around the studio as he asked: ‘What else is hollow here that might suddenly [open]? I should know this happens on this show.

‘You see, honestly now you’ve got me on a real high alert paranoid trip. My nose is running, I’m showing all the kind of flight or flight responses now.’

Showing his sense of humour hadn’t faltered amid the chaos, he added: ‘It’s just really good that I’m not a sort of trained assassin or martial arts expert, because he’d be dead. Or she. I don’t even know, I didn’t get the gender… I need to lie down.’ 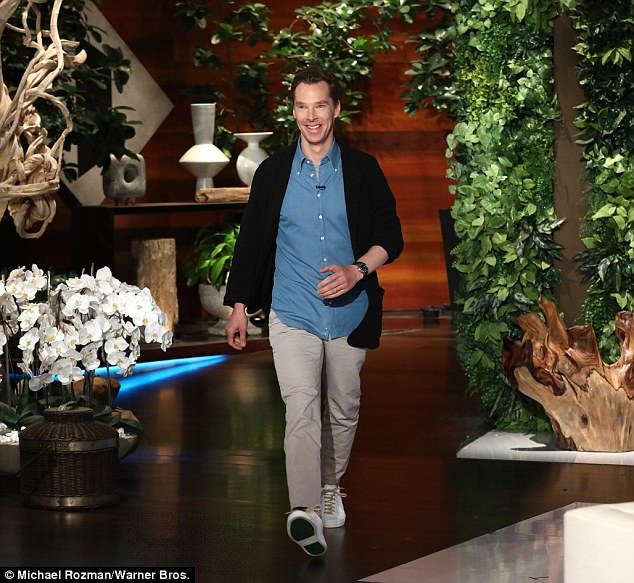 Cool: For his stint on the show, the star was casually cool with a blue shirt with taupe trousers 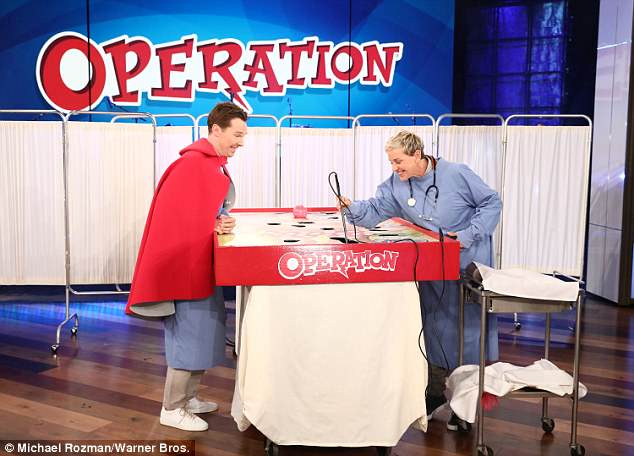 Scrubs: Benedict and Ellen later threw on hospital scrubs for a giant-sized game of Operation

During the show, which is set to air on Friday, he threw on some hospital scrubs and a red cape to play a game of Operation against Ellen on a giant-sized board.

They had 45 seconds to remove as many pieces as they could, with each competitive star attempting to distract the other during their turns.

In the end, it was Benedict who emerged victorious as he successfully extracted two items as throwback hits by Ginuwine and Mystikal played in the background.

Away from Avengers: Infinity War, the London-born actor has also been busy promoting his upcoming miniseries Patrick Melrose. 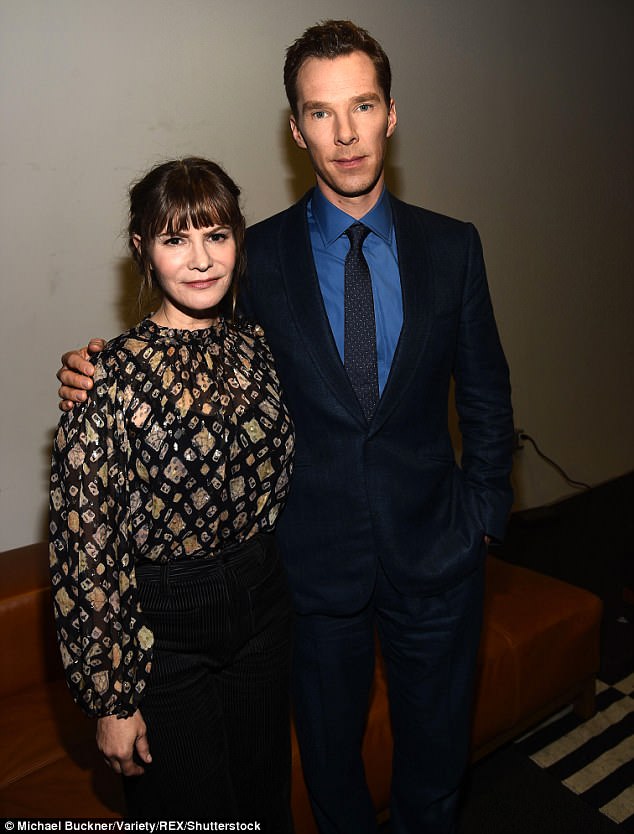 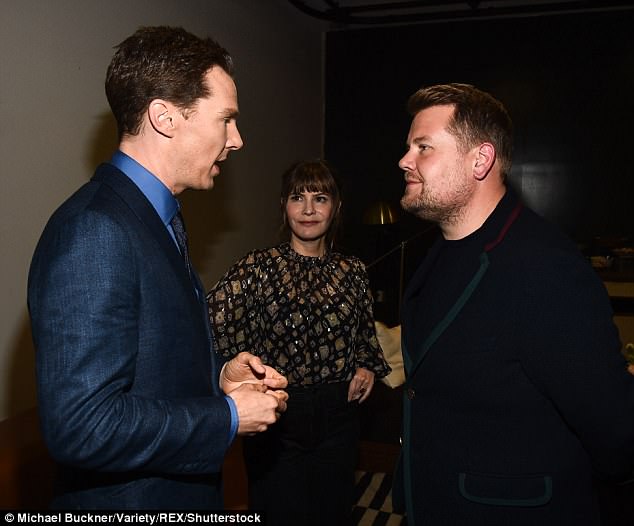 Producer: During his night on the town, he posed for a snapshot with producer Adam Ackland Group shot: The trio got together for a group shot with (L-R) executive producer Michael Jackson and writer David Nicholls

Benedict tired the knot with theatre director Sophie Hunter in 2015, and the lovebirds are the proud parents of two sons – Christopher, two, and Hal, one.

After winning over a huge fan following for his starring role in the British TV series Sherlock, Benedict has gone on to become a bona fide Hollywood star.

In addition to playing Doctor Strange in the Marvel Cinematic Universe, he has been nominated for an Academy Award for the 2014 movie The Imitation Game and starred in such films as The Hobbit, Black Mass and Star Trek: Into Darkness.

His new series is based on the novels by Edward St. Aubyn and follows his character Patrick Melrose ‘from a privileged but deeply traumatic childhood in the South of France, through severe substance abuse in his twenties in New York and, ultimately, toward recovery back home in Britain,’ according to Showtime. 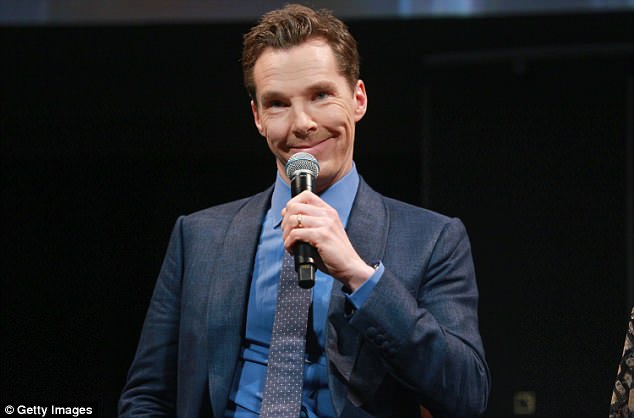 Project: As the show was screen, a dapper Benedict spoke to the audience about the project The host with the most: He was interviewed by James, who served as moderator on the night 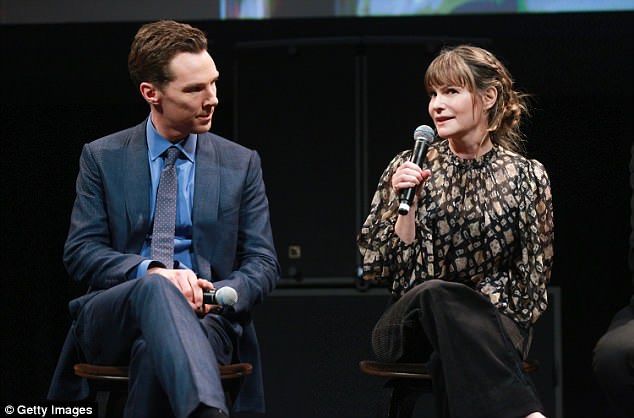 Listen: He listened intently as his co-star Jennifer spoke about her role in the Showtime show Emmy: Bosses of the show are pushing it forward for consideration at this year’s Emmy Awards