Benidorm policeman ‘kneels on sunbather’s neck’ as he arrested

Police in Benidorm have been criticised after an officer appeared to place his knee on a man’s neck as he was arrested – the same restraint that killed George Floyd.

The incident took place on Poniente Beach in Benidorm after the man wandered on to the sand without a mask on and with his dog, despite guards telling him the area was too crowded and pets are not allowed.

By the time police arrived the man had stripped off and refused to get dressed, sparking the scuffle which ended with him being pinned to the ground.

People who saw the video online quick to accuse the officers of being too heavy-handed with the man, despite those on the beach applauding as he was led away.

One British expat wrote on social media: ‘Look at what happened to George Floyd and they do the same thing again.

‘He doesn’t look like a dangerous man to me.’

Another added: ‘What a disgusting society. People expressing happiness at the arrest of a man who’s not harming anyone.

‘I think the arrest is over the top. Shameful.’

As the video starts it shows one officer escorting the man out of the water and on to the beach, after he had been swimming in the water with his pet dog.

The naked man sits down on the sand to pick up his swimming shorts, before standing up in order to put them on.

But he then turns towards the beach and raises his arms in the air, prompting a second officer who has been taking care of his dog to come rushing over.

That officer then trips the man who then begins wrestling with the officers, before eventually ending up face down in the sand.

At that point, the second officer can be seen placing a knee on the naked man’s upper back while his colleague reaches for his handcuffs. 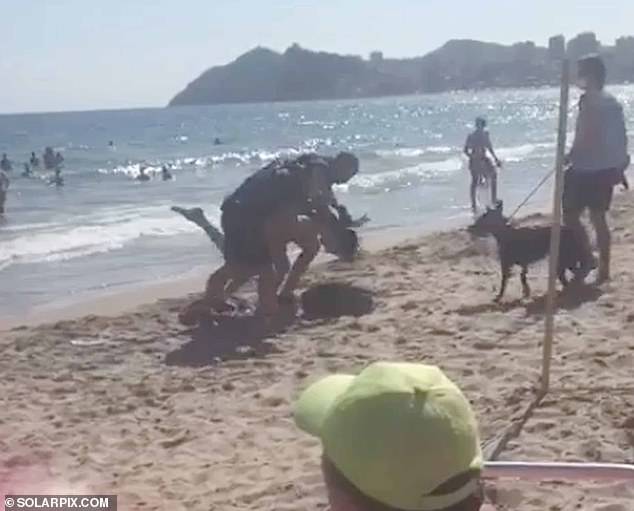 Officials said the man had to be restrained after he defied guards to walk on to a crowded beach, argued with police and then assaulted and officer

It takes the officer some time to unhook the cuffs, requiring the assistance of a passerby before the man can be properly restrained.

Throughout the ordeal, he is lying on his front with the officers on his back.

The police wore face masks but the naked man was not wearing one. Masks are compulsory in all public spaces in Mallorca, with a £90 fine for breaches.

A spokesman for Benidorm Council said: ‘Appropriate force was needed to restrain him after he assaulted an officer.

‘He was touching his privates and arguing with the police.

‘One form of restraint is what you see in the footage and he was handcuffed while he was lying on the ground and taken away.

‘There’s nothing more to be said. We’re talking about someone who ignored instructions and became violent and he needed to be calmed down.’

A well-placed source said the unnamed man would probably end up receiving a fine.