‘You should have scored four’: Benjamin Mendy and Riyad Mahrez joke Raheem Sterling could have had another despite Manchester City team-mate netting a hat-trick in Champions League win over Atalanta

Raheem Sterling may have been the hero for Manchester City in the Champions League with his hat-trick against Atalanta, but his efforts clearly weren’t enough for some of his teammates.

The England winger was in superb form as he led City to a 5-1 win, but Benjamin Mendy and Riyad Mahrez took the opportunity to tease Sterling at the final whistle, telling him he could have grabbed another goal.

With City having wrapped up an impressive display to put themselves in a commanding position in Group B, defender Mendy wandered over to the hat-trick hero alongside midfielder Mahrez, seemingly to congratulate him for his haul. 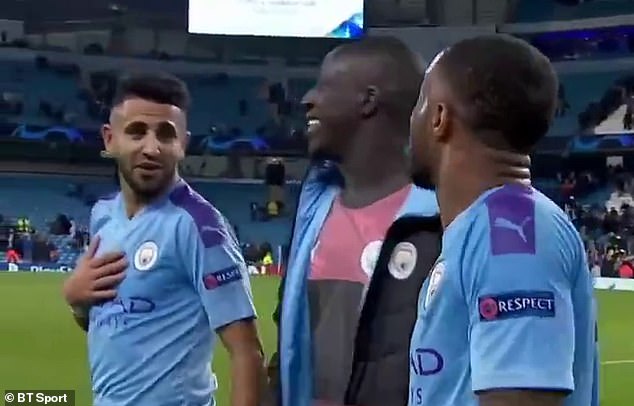 But both player held out four fingers and laughed with Sterling as they made their way towards the dressing room.

Sterling then collected the match ball as he grinned after sealing his first ever Champions League treble.

Sterling has been key for Pep Guardiola’s men this season as they look to retain their Premier League title under the challenge of Liverpool, who have quickly risen to the top of the table after making an unbeaten start. 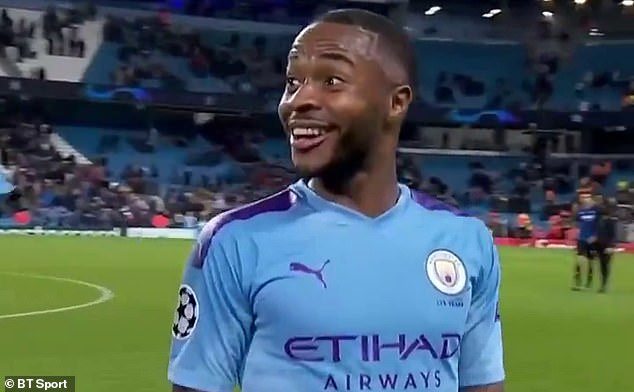 Sterling smiles as his teammates poke fun at him, before he scoops up the match ball

The elusive Champions League is also a high priority for the Sky Blues this season, and more performances like this from Sterling will give them a great chance of lifting the famous trophy next summer.

It wasn’t just goals that summed up the 24-year-old’s night, as he also turned provider for Sergio Aguero’s equaliser after Atalanta’s shock lead – cutting inside from the left and floating over a perfectly timed ball that gave the Argentine a tap in.

A mazy run into the box then led to a penalty after he was felled after good footwork, with Aguero again dispatching to give City the lead. 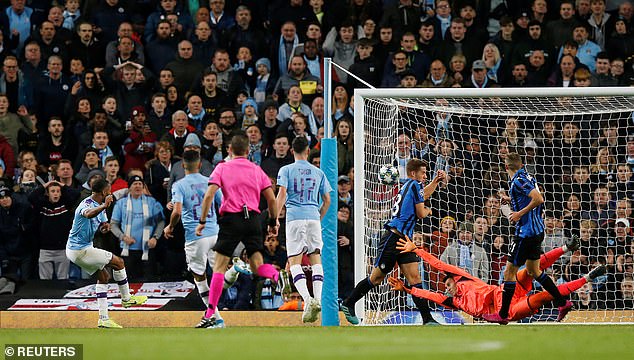 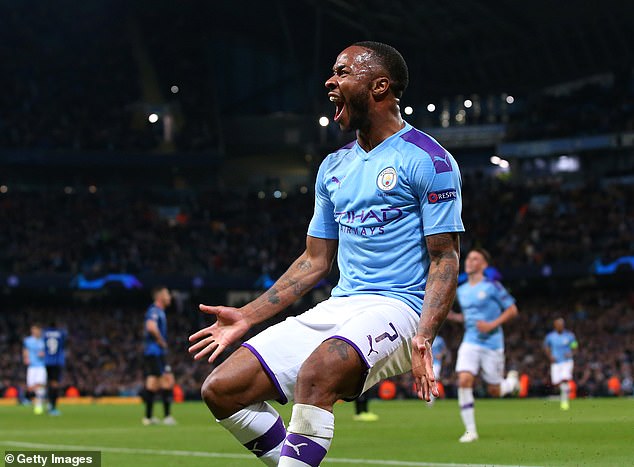 His first goal of the night will be one of the easiest he ever puts away, as Kevin De Bruyne eased his way into the area from the right, laying on for Phil Foden, who then provided Sterling with practically an open goal as he thumped home.

He was then played in down the left by Ilkay Gundogan after being gifted acres of space, taking the ball away from the defender before slotting into the corner. And he wrapped up his hat-trick after a putting away a brilliant cross from Mahrez.

But as his teammates point out, Sterling could have indeed netted a fourth after he found himself in the clear, but could only fire wide.

His manager Guardiola heaped praise on him after the game, calling him an ‘extraordinary player’ following his scintillating display.