NRL veteran Benji Marshall has given blunt advice about how to have a long and happy career in the league – after a turbulent off-season for youngsters in the game.

The West Tigers star and father-of-one has warned NRL hopefuls to stay out of the pub to ensure a successful career.

Marshall, who has enjoyed a a relatively scandal-free career, admitted that NRL players struggle to live a normal life as they’re thrust into the spotlight.

But even Marshall, who is about to start his 17th season, is sick of the drama which continues to plague the game, the Daily Telegraph reported. 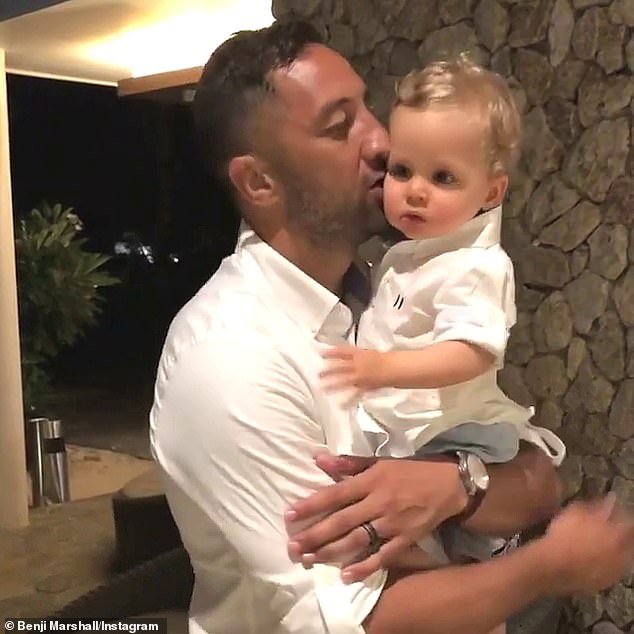 ‘I’m in the same boat as everyone else – everyone’s fed up with the off-field drama and wants to start talking about footy,’ he said.

A raft of players were arrested and charged for assault and sexual assault during the off-season, leading CEO Todd Greenberg to address the media storm and take a stand against the behaviour.

The NRL will introduce a ‘no fault’ stand down policy for players charged with serious criminal offences in a bid to tackle serious allegations against players.

Most recently Tyrone May, from the Penrith Panthers, was charged with disseminating and recording graphic images without consent following the release of a sex tape.

Ben Barba was stood down from the North Queensland Cowboys and de-registered by the NRL for allegedly bashing his girlfriend in a casino on Australia Day. 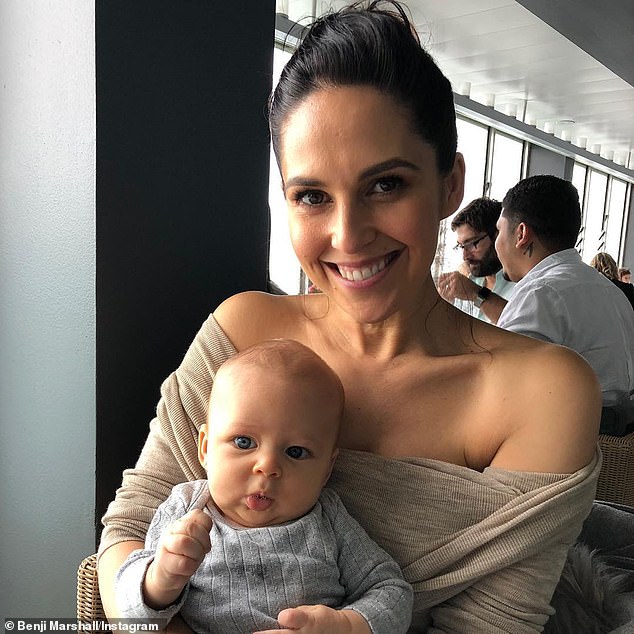 ‘Everyone wants footy players to live normal lives but I don’t think we can,’ Marshall said (pictured: Marshall’s wife Zoe and their son)

The heightened scrutiny of the league prompted Marshall to take a strong stance against players getting sucked into nightlife.

‘Everyone wants footy players to live normal lives but I don’t think we can,’ Marshall said.

‘Players will have to sacrifice their lives off the field in order to make it through a 10-year career. Young guys want to have beers with their makes but we can’t go to the pub anymore, we need to stay home.’

Marshall avoids the trouble by going home to his family – wife Zoe and young son Fox.

He married the 34-year-old media personality in 2013 and the couple welcomed their first child at the beginning of 2018.

They named him Benjamin Fox but he goes by the unique nickname Fox.

Marshall, who was ecstatic about the birth of his first child, wrote at the time: ‘Pulling Fox into the world is the best thing I have done in my life and I feel I have the greatest honour in being his father.’ 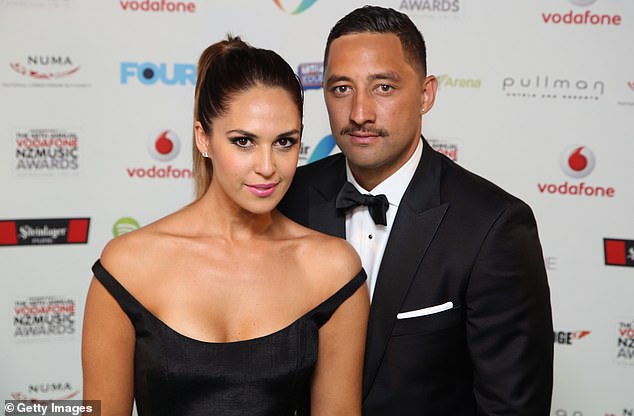 Marshall (pictured with wife) is keen for the NRL season to kick-off, taking to the pitch for his 290th first-grade game against the Manly Sea Eagles on Saturday

Marshall’s frank advice about avoiding the pub comes after his short brush against the law in 2011.

Marshall was charged with assault after an altercation at a McDonald’s in Sydney, where a man suffered facial injuries.

The case was dismissed after a judge ruled there was reasonable doubt Marshall inflicted the injury.

Marshall is keen for the NRL season to kick-off, taking to the pitch for his 290th first-grade game against the Manly Sea Eagles on Saturday.

Marshall will also appear on Fox League pre and post match coverage during the season.