Bernard Tomic has admitted he threatened to knock out Lleyton Hewitt in vile text messages but denies he ever involved Hewitt’s family.

The 26-year-old welcomed 60 Minutes into his Gold Coast family home for an explosive interview chaperoned by his overbearing father John Tomic.

The father-son duo have struggled to let go of an the alleged verbal altercation almost a decade ago, allowing it to implode into a very public dispute which reached breaking point at an Australian Open press conference last month. 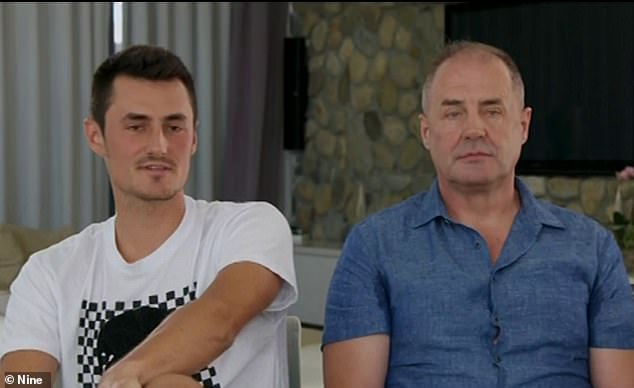 After a brutal first round loss at the Australian Open, Tomic went gunning for Hewitt and claimed ‘no-one likes him anymore’.

The shot was returned by Hewitt who said the tennis bad boy sent him threatening text messages about his family over a 18 month period.

Tomic used the 2010 account to justify the text messages and general dislike of Hewitt but claimed he would have never terrorise his family.

‘Yeah. Threatening, I did message him, I said exactly the words ”I will knock you out If you come one metre from me”, ‘ Tomic admitted to Landon.

Tomic was adamant he would not have targeted the family and stamped down on his physical threat.

‘I stand by my threats towards him, but not to his family, which has nothing to do with nothing,’ he said. 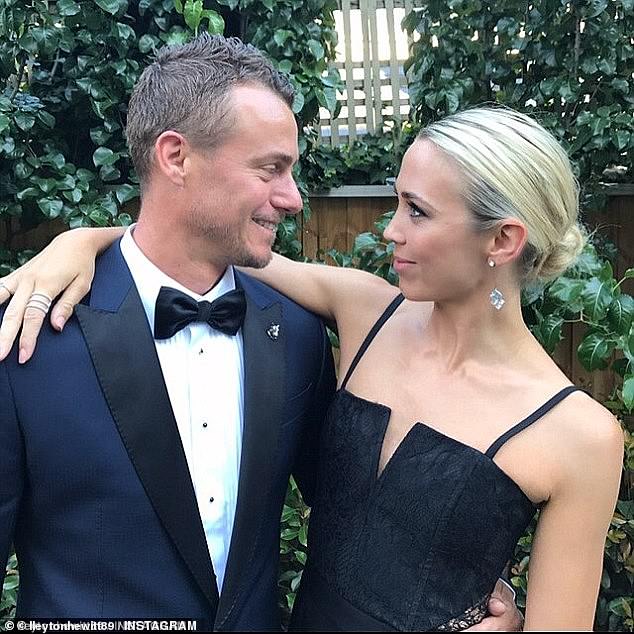 Tomic was adamant he would not have targeted the family and stamped down on his physical threat (pictured: Hewitt with his wife Bec) 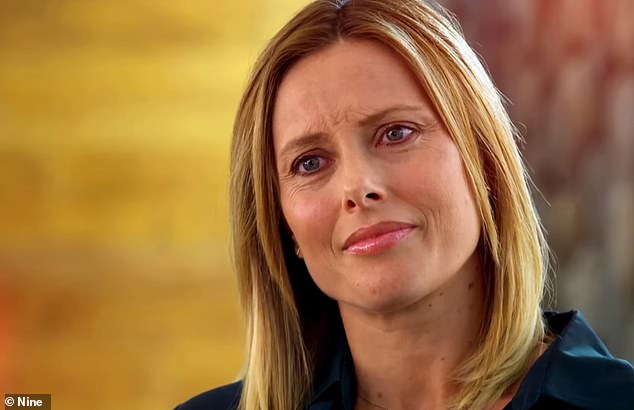 ‘Now the fact that he’s said that; if he comes two metres from me.’

Tomic also said the decision to target Hewitt in the press-conference was not a spur of the moment decision to overshadow his loss but he had mulled over it for a while.

Hewitt, who is the current Davis Cup captain, is displaying his power during the public struggle.

‘Lleyton is right to say Bernard will not be considered for Davis Cup. Bernard does not meet the standards of behaviour and commitment to himself, the team or the sport,’ Tiley said on Saturday. 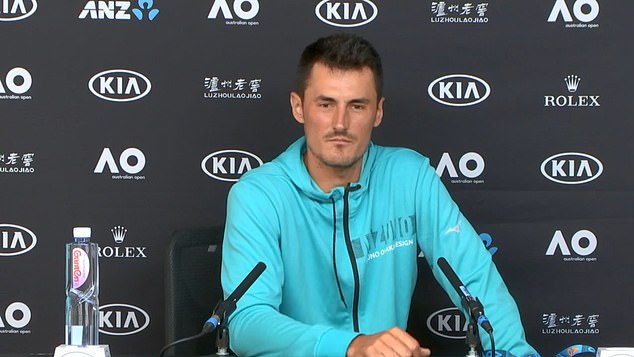 After a brutal first round loss at the Australian Open, Tomic went gunning for Hewitt and claimed ‘no-one likes him anymore’ (pictured)

‘Now, he is deliberately trying to damage that culture -and not for the first time… We have given (Tomic) more than a decade of support.

‘Ultimately, we have to draw a line when the behaviour does not warrant the support.’

Tomic claims Hewitt came into his hotel room at the Grand Hyatt, Melbourne, during a Davis Cup tournament in 2010 to question and threaten the teenager.

According to the Tomics, Hewitt ‘threatened’ and ‘intimidated’ the teenager who was as young as 15 or 16 to find out who was against him at Tennis Australia.

They accuse Hewitt of telling Tomic he would not play the Davis Cup if he didn’t deliver information – a threat that lingers in 2019.

Journalist Allison Langdon challenged why it took the pair almost 10 years to tell their story and questioned the validity of the instance but they stayed strong and united. 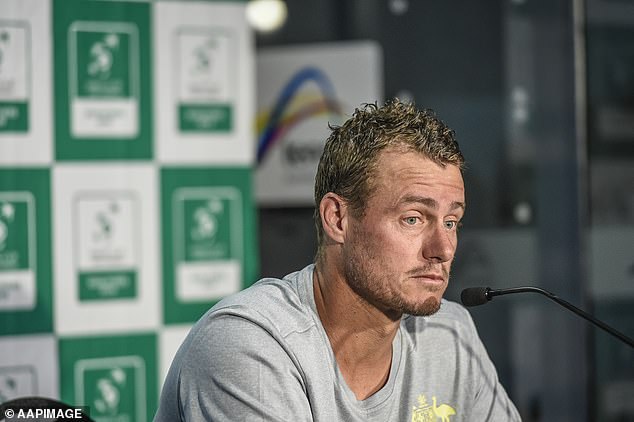 The shot was returned by Hewitt (pictured) who said the tennis bad boy sent him threatening text messages about his family over a 1.5 year period 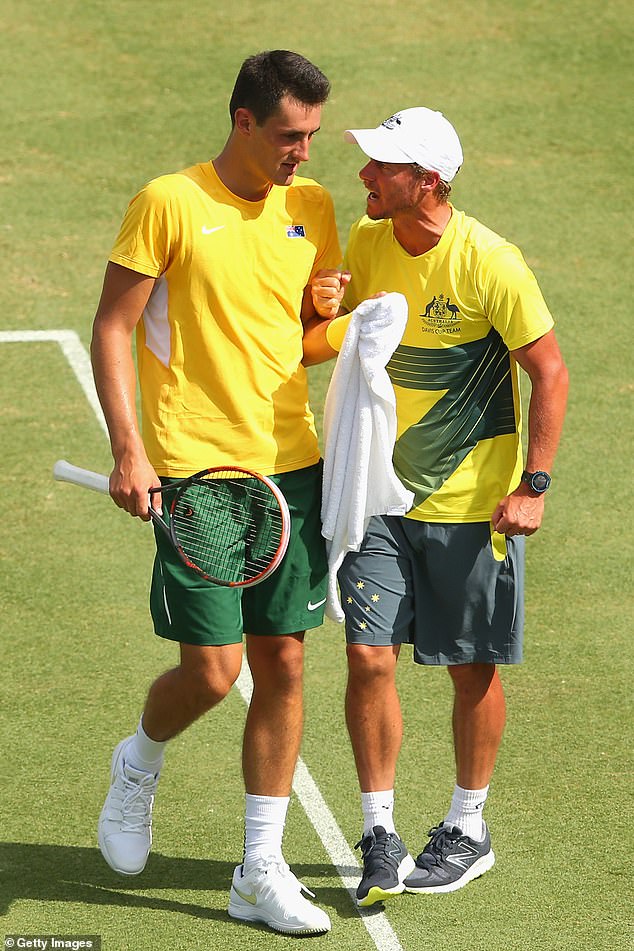 The 60 Minutes interview was the first time Tomic had sat down with his protective tennis father who was handed a suspended prison sentence for assaulting Tomic’s training partner in 2013.

‘The problem you have is that people don’t like you,’ Langdon told Tomic.

John said it was merely her opinion and questioned whether it was fair for her to call-out the notorious tennis player.

Despite this, Tomic claims he’s had a great career and Australians love to hate him.

While acknowledging an arrest and bad boy behaviour that has been scrutinised in the public eye, Tomic said he couldn’t match up to the likes of Roger Federer or Michael Jordan. 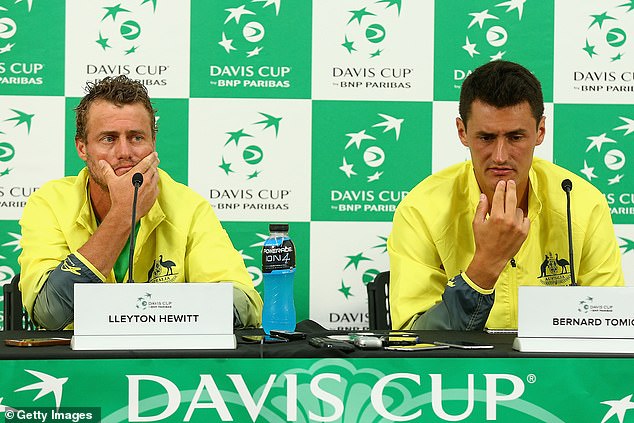 Langdon questioned whether it was fair for Tomic to say he hates the sport but he didn’t seem particularly bothered.

‘Tennis was my life growing up, you know it was different and now it’s just a job I’ve done. Get it over and done with,’ Tomic said.

He then delivered a bizarre wink to Langdon when asking himself whether he needed to ‘try and make it hard’.

60 Minutes also interviewed Wally Masur who was tight-lipped on the future of the duo and the ramifications for Tennis Australia.

In reference to the 2010 accusations, Masur explained it was a case of one persons words against another but confirmed that Tennis Australia were investigating.

Masur added that Hewitt feels ‘betrayed’ as he put a lot of effort into Tomic’s career.