Sanders was referring to a series of platform recommendations for the Democratic Party that were put together by the Biden-Sanders Unity Task Forces – a series of groups formed after the primary process to bring together the moderate and progressive wings of the party.

‘These folks needless to say people represented the progressive movement have a different perspective on things than the Biden’s people, but there was serious discussion. And I think a real honest effort to come up with a compromise. And I think the compromise that they came up with, if implemented will make Biden, the most progressive president since FDR,’ Sanders said on MSNBC Wednesday night. 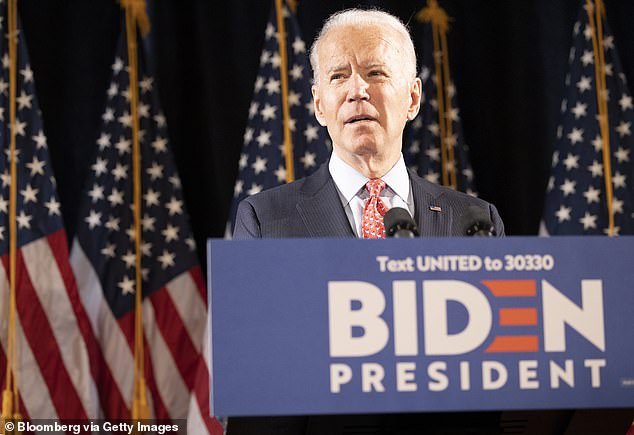 President Roosevelt, who ran the country during the Great Depression, instituted a New Deal program whose series of public works proposals to put the country back to work expanded the scope and size of the federal government.

The new set of proposals from Biden and Sanders address all the major policy areas, recommending ways to combat climate change and institutional racism along with a proposal to expand health care coverage and rebuild the economy in the wake of the coronavirus pandemic. 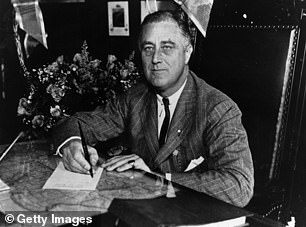 The two sides battled it out over key areas and liberals came up short in several of them. And while Sanders conceded the plan does not have the full progressive wish list, he noted that he expects his liberal base of support to come out for Biden in November.

The recommendations are tweaks to the more moderate position Biden espoused and avoid some of the controversial measures that progressives have pushed but could turn away swing voters, such as ‘Medicare for All,’ the Green New Deal, and defunding police departments.

The 110-page document – which still has to be debated and adopted by the party – are the result of negotiations between six- and eight-person groups that were appointed by Biden and Sanders.

The groups were formed in part to appease progressives – who were upset that neither Sanders nor Elizabeth Warren captured the nomination – and assure the left wing of the party it will have a voice with the more moderate Biden. Warren is under consideration for Biden’s running mate.

The task force, co-chaired by liberal Congresswoman Alexandria Ocasio-Cortez and former Secretary of State John Kerry, took 15 years off Biden’s original target date for 100 per cent clean energy, moving it up to 2035 from 2050. 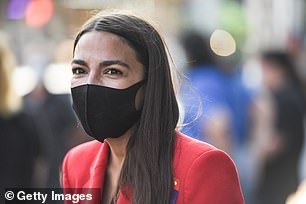 It also recommends eliminating carbon pollution from power plants by 2035 and zeroing out net greenhouse gas emissions across the entire economy by 2050.

And it asks Biden to rejoin the Paris Climate Accord on day one of his presidency, something he has promised on the campaign trail. 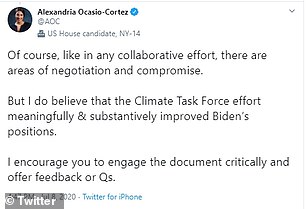 There is no mention by name of Ocasio-Cortez’s Green New Deal plan.

‘Like in any collaborative effort, there are areas of negotiation and compromise,’ Ocasio-Cortez wrote on Twitter. ‘But I do believe that the Climate Task Force effort meaningfully & substantively improved Biden’s positions.’

There is also no mention of a national ban on fracking, which young climate activists have pushed for but is something Biden avoids as it could hurt him in key battleground states like Pennsylvania.

The plan tackles many of the law enforcement use of force issues that returned to the spotlight after the death of George Floyd.

The recommendations mirror many of those in legislation Congressional Democrats are trying to move through the legislative branch: establishing national use of force standards; banning police choke holds; establishing a national database to track law enforcement officers who have abused their power; and reviving the use of pattern-or-practice investigations.

There is no mention of defunding the police – a call some progressive members of the party took up after Floyd’s death.

And there is no call to legalize marijuana, but it follows Biden’s stance of decriminalizing the drug. It does legalize it at the federal level for medical use, but allows the states to decide whether to legalize it for recreational use.

There is a provision to eliminate private prisons, which is something Sanders has called for.

The recommendations would undo many of President Donald Trump’s policies, including rescinding the travel ban, stopping the prosecution of asylum seekers and ending policies that require those seeking asylum to apply from other countries.

And they include a call for a 100-day moratorium on deportations.

But there is no call to abolish the Immigration and Customs Enforcement, which some progressives had wanted.

Family unity would be a ‘guiding principle’ for Biden’s immigration policy and that detention would be a ‘last resort’ – particularly for children, the recommendations state.

‘Democrats will end the Trump Administration’s shameful efforts to close the door to the world’s most vulnerable refugees. It’s not only the right thing to do — it’s the smart thing to do,’ it says.

The plan takes Biden’s approach in building on the Affordable Care Act by providing a public option instead of embracing the Medicare for All universal health care plan supported by Sanders and Elizabeth Warren.

But it does lower the Medicare eligibility age from 65 to 60 – a concession for Sanders and his supporters.

‘We still believe that Medicare for All is the right way to go and we’re still going to continue to fight for that,’ said progressive Democratic Rep. Pramila Jayapal, who co-led the health care task force. ‘But this was a situation where Joe Biden had already put a stake in the sand on the Affordable Care Act and it was part of his legacy with President Obama.’

The plan also recommends coronavirus testing and treatment to be ‘widely available, convenient, and free to everyone.’

And it calls for special insurance options for people impacted by the pandemic, such as those who lost their insurance when they became unemployed. 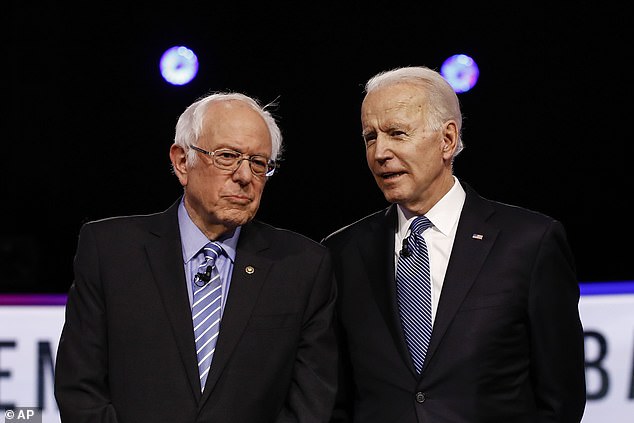 Among the recommendations are raising the federal minimum wage to $15 an hour, 12 weeks of paid family and medical leave, and universal child care for 3- and 4-year-olds.

It also calls for an expansion in affordable housing and advocates for a Homeowner and Renter Bill of Rights ‘to protect families from abusive lenders and landlords.’

There’s also a plan for a large-scale federal employment program in an area such as infrastructure – a program that would mimic the New Deal.

And there are recommendations on how to help the economy recover from the coronavirus pandemic.

‘Make no mistake: President Trump’s abject failure to respond forcefully and capably to the COVID-19 pandemic – his failure to lead – makes him responsible for the deaths of tens of thousands of Americans and for the pandemic-induced recession that has followed,’ the plan notes.

And it has recommendations to address the racial wealth gap, including a call for a study on reparations.

Biden won the Democratic nomination in part because of his strength with black voters.

The plan calls for guaranteed universal pre-K education, a tripling of Title I funding, and tuition-free college for students whose families earn less than $125,000 per year.

It also recommends tuition-free community college for all students, including those in the Deferred Action for Childhood Arrivals immigration program.