The ex-wife of the British songwriter behind many of Elton John’s biggest hits is selling his original handwritten lyrics, which are set to reach around £1 million.

These include the first draft of the classic hit Candle in the Wind, which was sung as a tribute at Princess Diana’s funeral in September 1997, Goodbye Yellow Brick Road and Bennie and the Jets.

They have been put up for auction by Maxine Taupin, who was married to songwriter Bernie Taupin – a longtime collaborator with the ‘Rocket Man’ – for five years from 1971 to 1976.

The auction also includes the original lyrics for Your Song, Saturday Night’s Alright for Fighting and The Border Song.

Ms Taupin told Rolling Stone she could not remember how she wound up with the valuable lyrics after her divorce.

‘You don’t just normally sit in a room and divide things up, but it might have happened like that,’ she said. ‘I don’t really remember the moment. But some of them were framed on a wall in my home and other ones were in a bank vault, perfectly preserved.’

Bernie Taupin (left) on his wedding day to his first wife Maxine Feibelman in March 1971. She divorced him in 1976 and somehow managed to hold on to some of his early hand-written lyrics 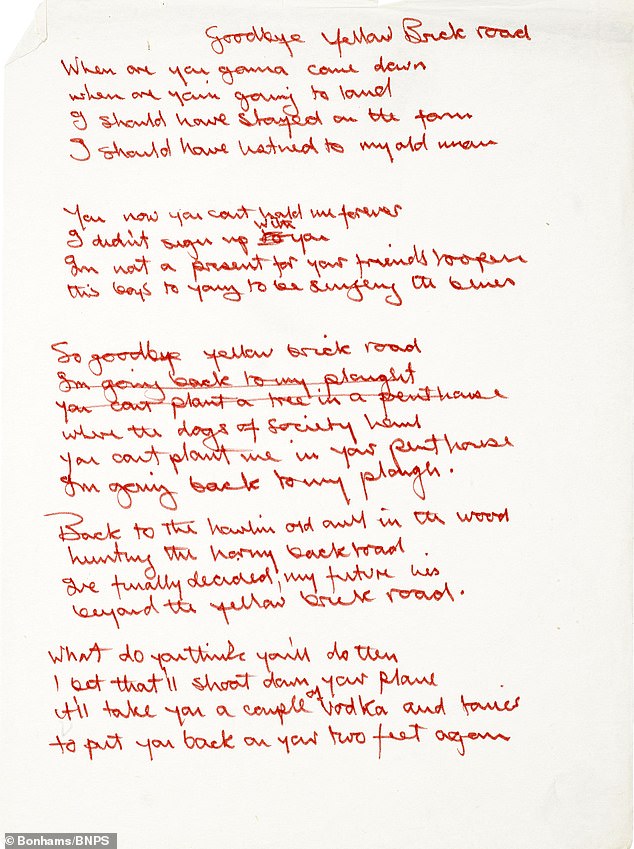 Sir Elton’s album Goodbye Yellow Brick Road is described as having come at the peak of his popularity. The song’s original lyrics are expected to sell for around £200,000 – one of the most valuable set of lyrics in Ms Taupin’s collection

Ms Taupin said she was always amazed by how ‘prolific’ her ex-husband’s lyrics were.

‘When I heard the finished songs, I was instantly transported to that magical place these two creative forces have been taking us all to for so many years,’ she said in the Rolling Stone interview.

Born in 1952, her romance, and marriage at 19, to the songwriter and their subsequent break-up was a key inspiration behind many of the songs the singer-songwriter duo produced.

Sir Elton’s 1971 hit Tiny Dancer was one of those songs. It referred to her as the ‘seamstress’ in the band – a reference perhaps to her sewing patches onto his denim clothes.

‘They played it for me in the studio with Elton on one side of me and Bernie on the other,’ she told the music magazine. ‘I was totally blown away when Bernie said, “I wrote this for you.” It’s a moment I’ll never forget.’

She told Rolling Stone she had not spoken to her husband in many years and she last saw Sir Elton in concert when he played at Radio City Music Hall in 2004.

However, Ms Taupin, who has kept a low profile in the years since her split from the British songwriter, has decided that in the wake of the success of the biopic Rocketman, the time is right to cash in on the lyrics. 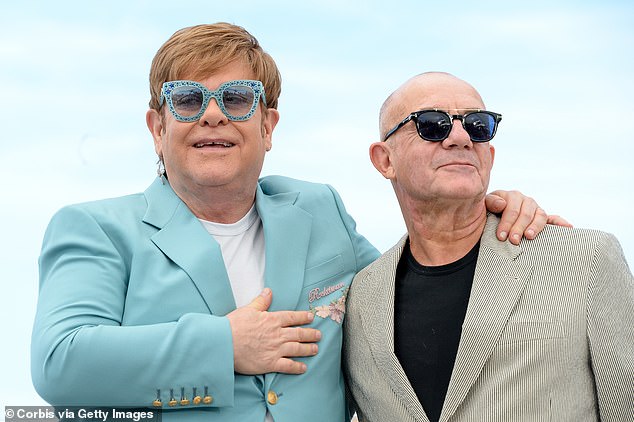 British songwriter Bernie Taupin (right) with Sir Elton John. Taupin was a longtime collaborator with the legendary pop star and is responsible for the lyrics of many of Sir Elton’s classic hits 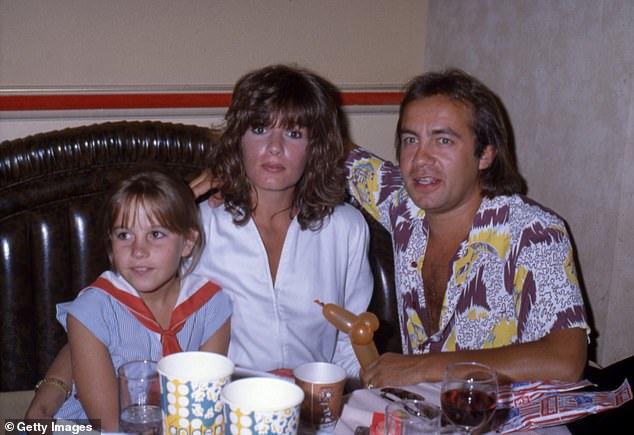 The film tells the tale of Sir Elton’s breakthrough years. Despite being a significant feature during that time, Ms Taupin is only mentioned in passing in the biopic.

The biopic also touches on the professional relationship that has over fifty years transformed into a solid friendship between Sir Elton and his longtime songwriter.

And while music is no longer Taupin’s day job – the father-of-two currently lives and works as an artist on a 30-acre ranch near Santa Barbara – his longtime friendship with the British legend remains very much alive.

‘I think we just found a bond of brotherhood and camaraderie that it was me and him against the world,’ Mr Taupin told CBS News in 2018.

The two first met back in 1967 when they both replied to an advertisement looking for songwriters. They soon discovered their strengths and weaknesses were a perfect match.

As Mr Taupin told Time writer, Andrew Chow, Sir Elton could not write lyrics, he could not write melodies – but together they could make songs. When Sir Elton was given a pile of Mr Taupin’s poems he was drawn to their lyricism and began cutting demos from them.

After meeting, they entered into what Mr Taupin described as a ‘non-sexual love affair’ – a complex relationship that had its ebbs and lows but out of which they always came out stronger.

In fact, it was Taupin who helped pick Sir Elton off the ground when the pianist contemplated suicide in 1968, a few years before he found international fame.

That memory would become the inspiration for Someone Saved My Life Tonight, which went to number one in the Billboard Hot 100 in 1975.

‘I wrote it from his point of view,’ Taupin explained. ‘A comical incident of him being depressed and attempting – a very feeble attempt I might add – of suicide.’

He’d found Sir Elton on the floor, with the ovens on, but the windows open. ‘I go, “What are you doing? Get off the floor”.

‘But it was a serious cry for help, so it made a good ingredient for the song.’

Two years later – armed with a stronger friendship and a way of working that has Mr Taupin create the lyrics first, before sending them to Sir Elton to create the melody -the duo broke through the music industry ceiling.

It was the start of what would be a five-decade strong career and more than 30 gold and platinum albums. 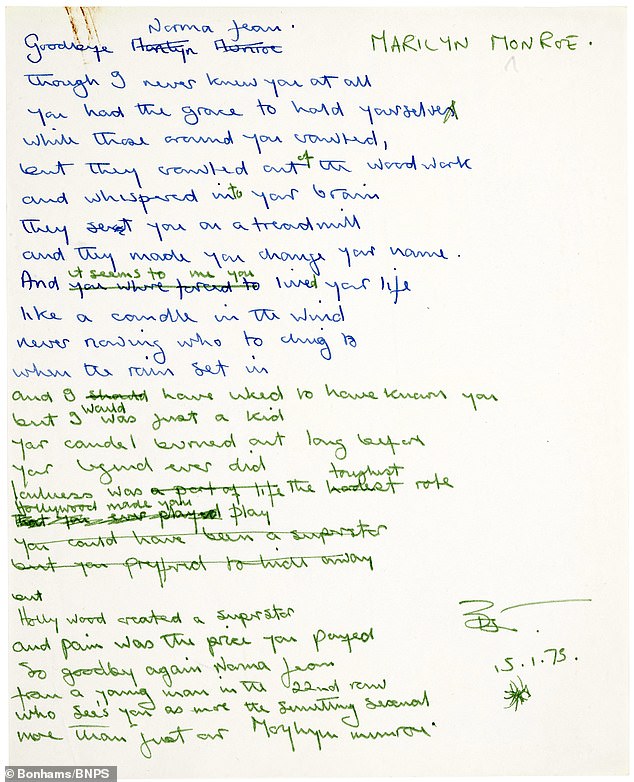 The handwritten lyrics to Candle in the Wind is one of the most valuable set of lyrics in the collection being put up for auction. It shows how it was written as a tribute for actress Marilyn Monroe who died in 1962

One of these is Candle in the Wind – the original lyrics of which have been put up for auction by Ms Taupin.

The handwritten lyrics show how the Marilyn Monroe-inspired song was initially written as a tribute for the actress, with Mr Taupin’s first opening line: ‘Goodbye Marilyn Monroe’.

He then crossed out ‘Marilyn Monroe’ and replaced it with her real name, ‘Norma Jean’, in the 1973 ballad paying tribute to the Hollywood star.

The page is headed ‘Marilyn Monroe’, suggesting Sir Elton and Mr Taupin had not yet come up with the final song title.

Mr Taupin once said of the song: ‘It was just a metaphor for fame and dying young. The song could have easily have been about Montgomery Clift or James Dean or even Jim Morrison.

‘But it seemed that she had a sympathetic bent to her, so I used her.’

The lyrics were later altered following Princess Diana’s death in 1997, with the opening line changed to ‘Goodbye England’s Rose’. 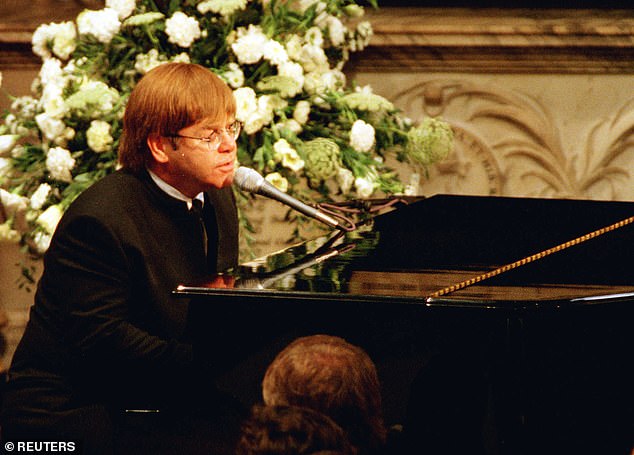 Giles Moon, director of music and entertainment memorabilia at auctioneers Bonhams, said: ‘We are so excited to offer not just one, but six original, handwritten lyrics for some of Sir Elton John’s iconic songs.

‘In terms of the value of each lot, it depends on how commercially successful the songs were, so the more popular they were, the more collectible they have become.

‘His album Goodbye Yellow Brick Road is seen as the peak of his popularity.’

‘Maxine is selling them now because this is a good year for all things Sir Elton, with both the movie and his autobiography coming out.’ 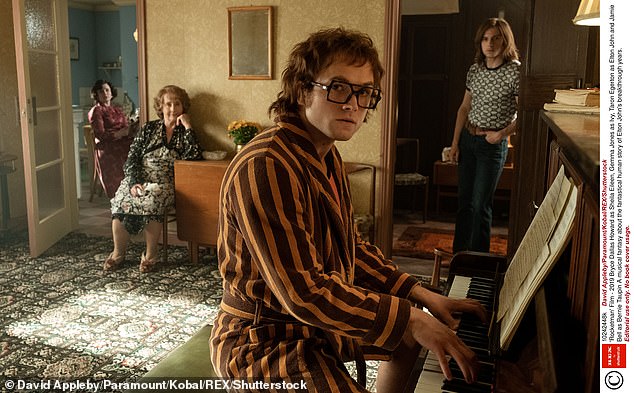 With the release of Rocketman, the film of Sir Elton John’s breakthrough years, the ex-wife of his long-time songwriter has decided to try make money off some of his original lyrics 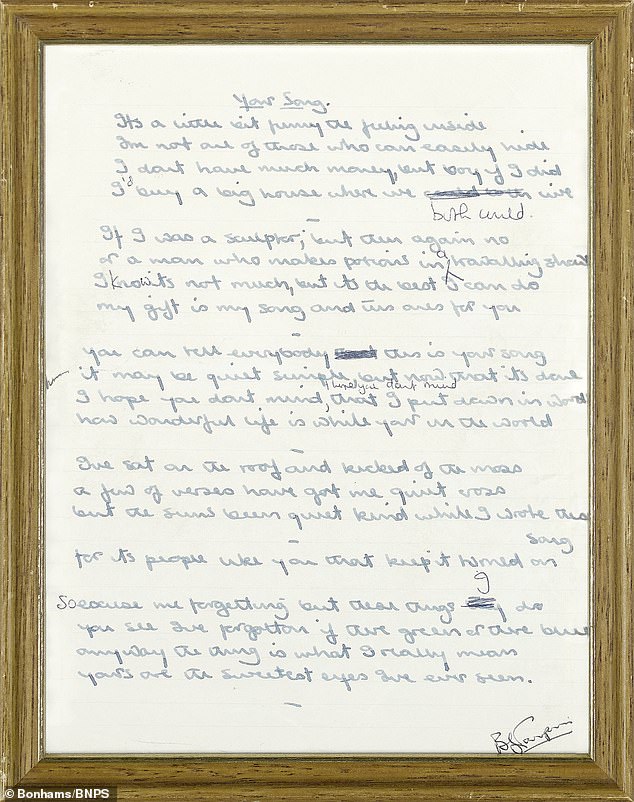 The melody for this song, the duo’s first monster hit, reportedly only took about ten minutes for Sir Elton to create

Sir Elton is said to have taken just 10 minutes to come up with the melody of the love song which would become his first ‘monster hit’.

The inspiration for the song, as depicted in Rocketman, sees Mr Taupin give Sir Elton (played by Taron Egerton) some lyrics as he goes up to brush his teeth.

By the time he comes down the stairs the melody was born – paving their way to becoming musical legends in the United States.

The lyrics for Bennie and the Jets (1973), which includes a second stanza which didn’t make it into the final song, are tipped to sell for £120,000. 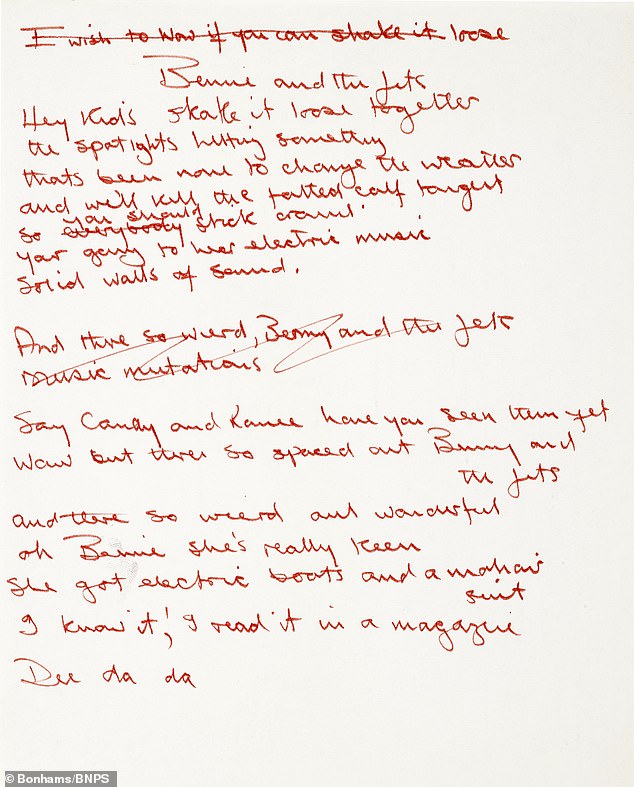 The lyrics for Bennie and the Jets (1973) which includes a second stanza that didn’t make it into the final version is expected to go for around £120,000

The sale is being conducted by auction house Bonhams Los Angeles.

The sale takes place on December 9 in Los Angeles, US. 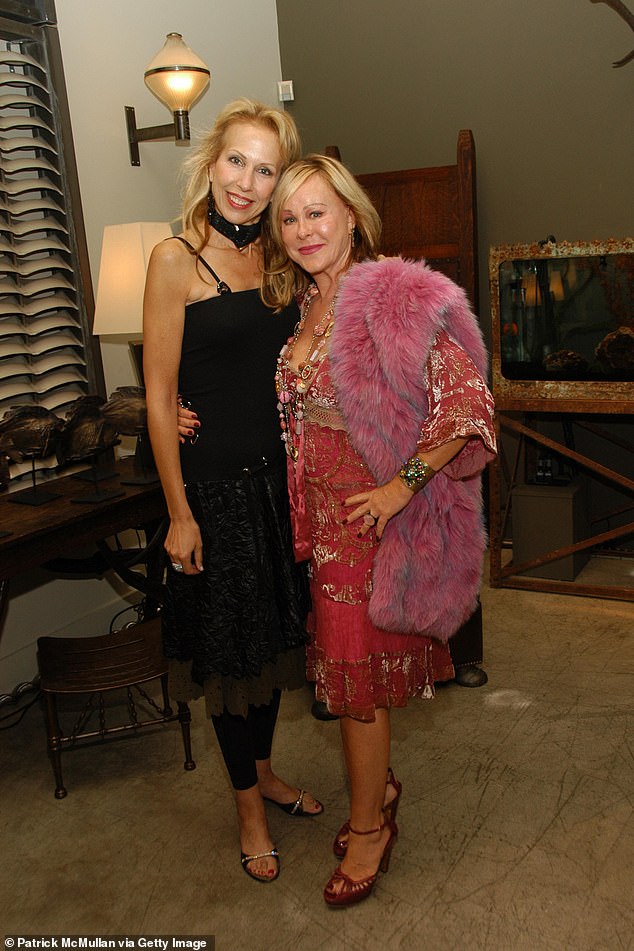 Maxine Taupin is pictured (right) with another woman, Marci Miller, at the Hip Hollywood Homes Book launch in the United States in 2006. Ms Taupin has kept a relatively low profile over the years with little known of her life since she separated from her former husband Bernie Taupin 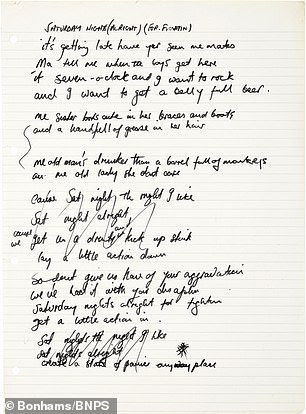 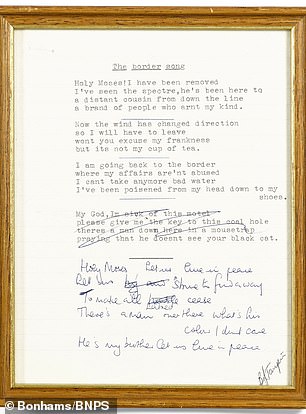